In England we do not celebrate Fasching (Carnival) like the German speaking countries Germany, Switzerland and Austria. All I have ever known of is Shrove Tuesday, also known as Pancake Day. On the seventh week before Easter and the Tuesday before Ash Wednesday, I remember looking forward to the endless homemade pancakes being available to me as a child. Although I could only manage to eat one or two because they were so big. They were very delicious.

This was to celebrate the consumption of fatty foods just before the start of Lent / fasting, on the lead up to Easter. Here in Austria, as well as Germany and Switzerland, it is celebrated a bit differently with a carnival type of affair, similar to the famous Rio Carnival, but not as grand/flamboyant. Essentially, everyone dresses up how they like and has a party, one last big party before Lent.

In Axams, I had the pleasure of experiencing a more traditional Faschings celebration. Apparently this is unique to the small town that is 20 minutes drive from Innsbruck. I met up with fellow blogger Werner Kräutler at the Axams Tourist Office. Close by was a barn and farmhouse where we met one group of lads, beer and schnaps at the ready whilst they prepare costumes for two of them. 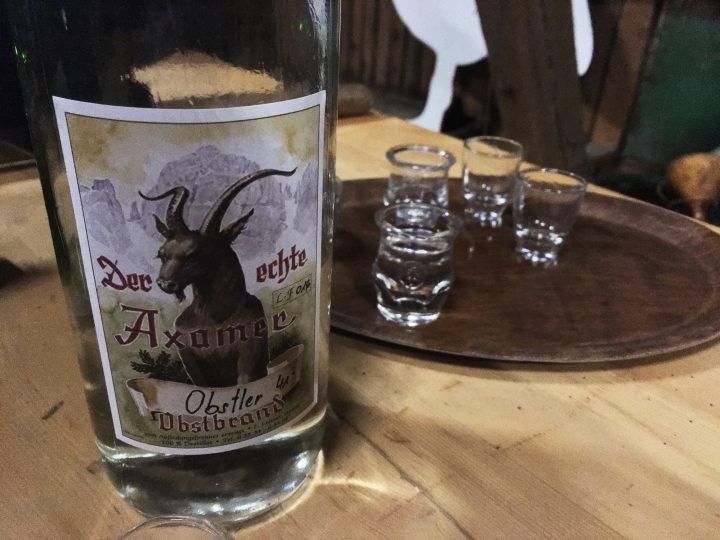 Local schnaps at the ready.

Using hay from the barn floor, two guys stuffed the thick linen shirt of another. They stuffed so much in that he could no longer move his arms and had the figure of a body builder. Going to the toilet was going to be a problem, good job there was help at hand. 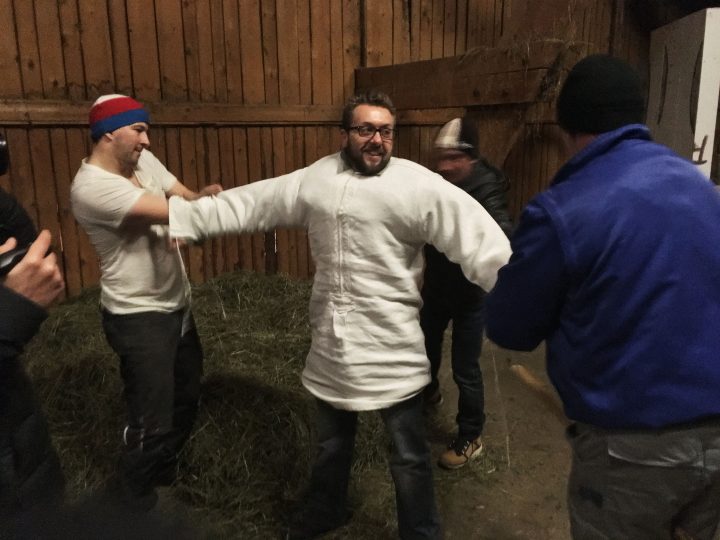 Preparing the costumes in the barn.

After his shirt was tied at the wrists, tucked into his skirt, a belt put on to hold it all is place and his wooden carved mask was put on, we made our way to the local school that looks after disabled children. 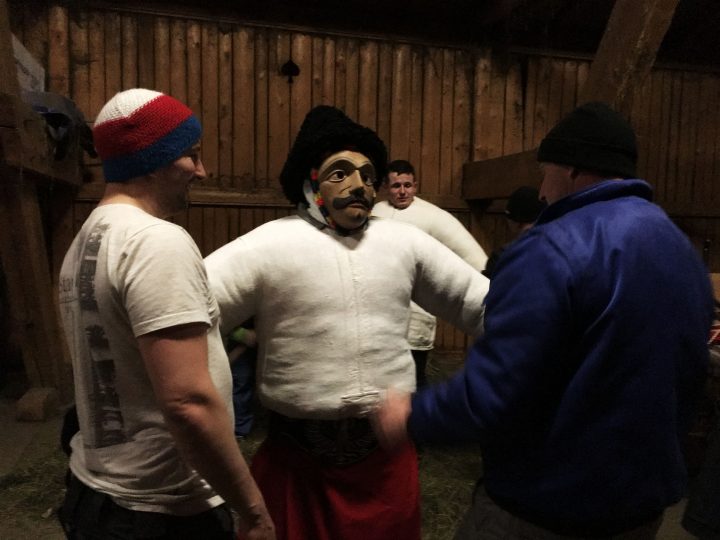 We waited for the others to turn up who wore other costumes of a traditional nature. The original Axamer group of figures include: a bear, a witch, a bird catcher, a fat belly and names I couldn’t find the translation for: Bajazzo, Tuxer, Laniger, Nadl. Other groups dress up differently, such as like chickens or whatever else.

Once the band of three guys turned up with their accordions and brass instruments, we began our tour. It started in the school, where the children, families and staff were waiting. “Umpa umpa umpa umpa” the band began to play and the masked group danced through the school to the main hall. 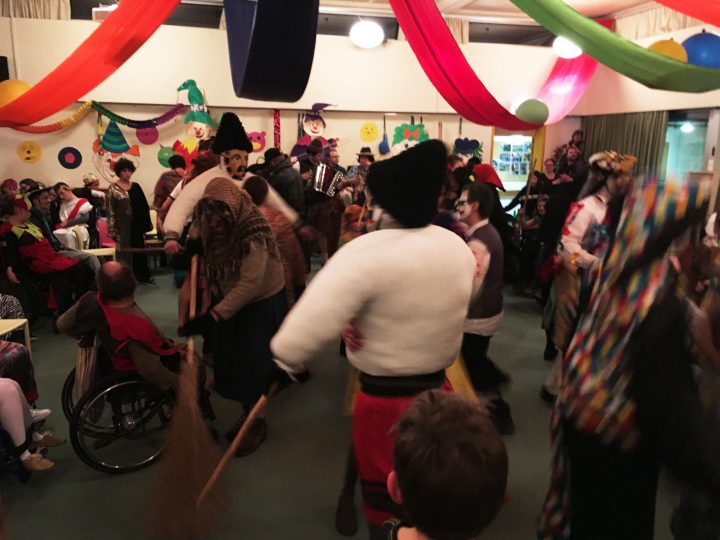 Dancing and singing at the local school.

Three traditional songs were to be played and the dressed up figures chose different children and adults to dance with. 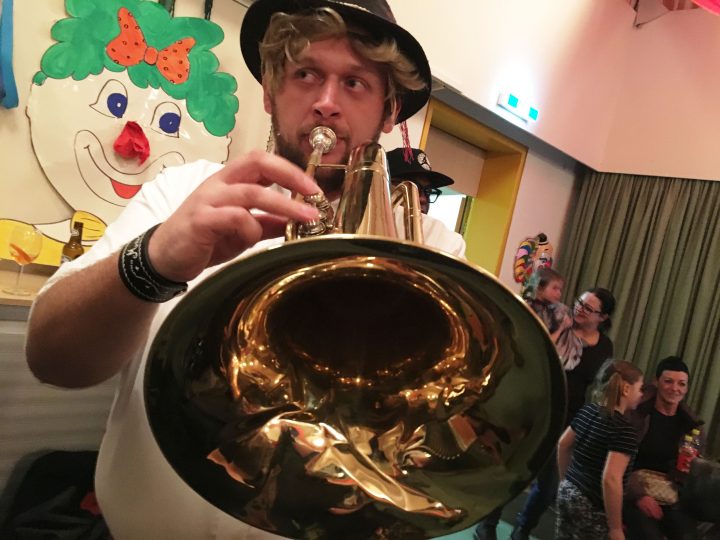 The eyes of the children lit up and the excitement and joy could be seen in their faces, it was very special for them and to experience myself. 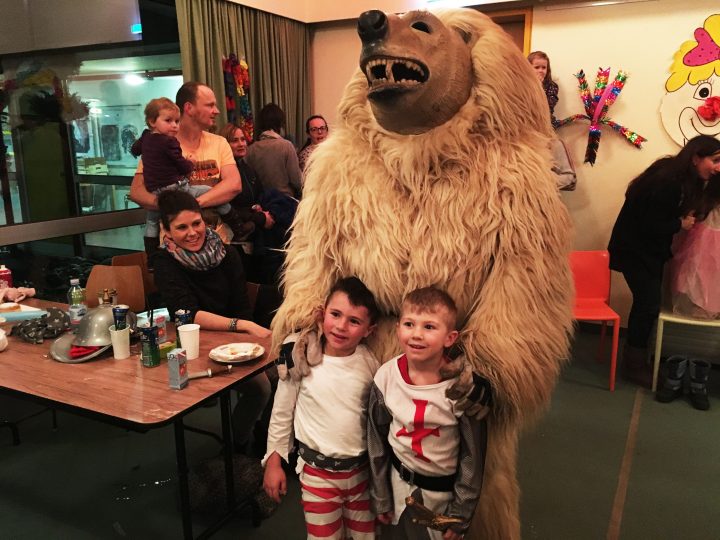 After the songs had finished, we were off to the next location as another group and band replaced us. The unique part of this is it is free. Not only free to participate or to watch, but there is no plan of where to go or when. Originally, it was only the school and certain guest houses. Today, private houses get their friends over, put on an array of food and drinks and wait for the mini shows to start. It’s like many house parties all happening at once with a different band in each house, it’s a great idea.

The next location was the farmhouse where we started. “Umpa umpa umpa umpa”. Clapping and cheering from the house could be heard from the street. After each song, a shot of schnaps is enjoyed by everyone. After the third song, the group had their shots of schnaps and were off to the next house. 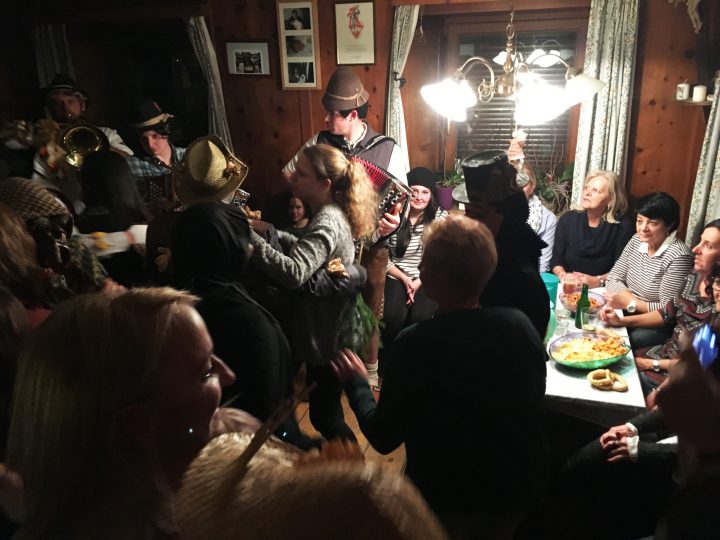 Werner and I moved on to the Postkutscherhof, the near by horse stables that has a large restaurant and bar. This is one of the venues where all groups come to provide their own show and also dance with the patrons. Band after band, dance after dance, schnaps after schnaps. This was all about having fun and spreading that fun to everyone around in true community spirit, something that is easily lost through generations, but kept very alive here. 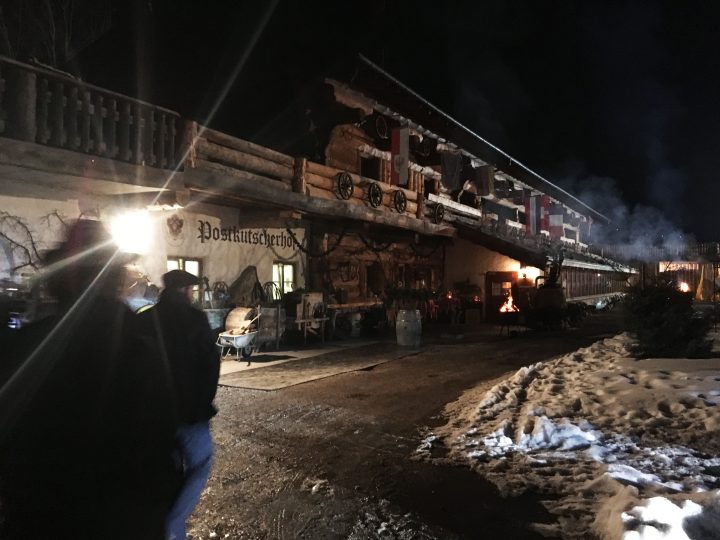 There were 16 to 20 groups each on their own tour. Each group consisted of up to about 15 people including the band. It was a fantastic evening full of music, dancing, laughter and lots of drinking, if you wanted it. 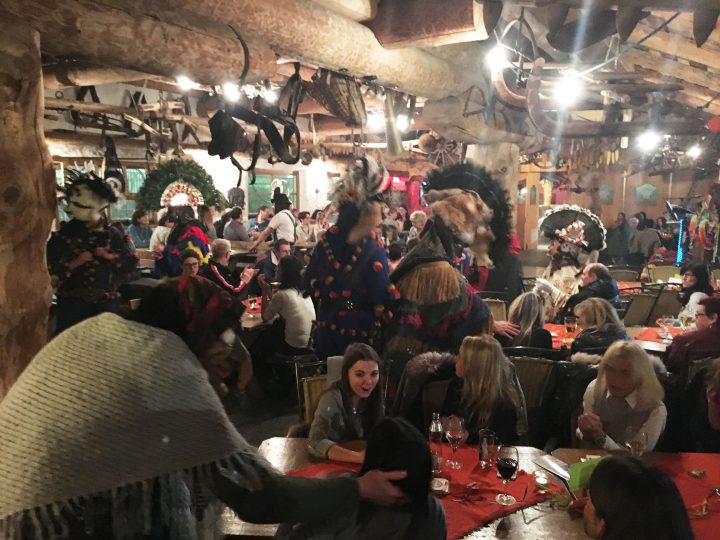 Dancing and schnaps drinking at the Postkutscherhof.

We left our group at the Alpinhotel Schlösslhof. The groups were very welcome here and the guests of the hotel seemed like they expected the Faschings celebration to occur – most were singing along with the traditional Tyrolean music and dancing the night away. What an experience! 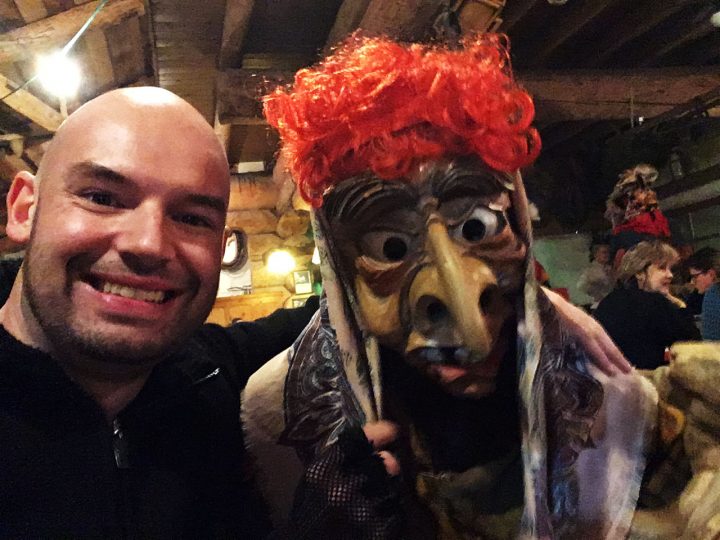 You can see more about this evening in this video, enjoy:

Want to know more about Faschings/Carnival in Innsbruck? Read about it on the Innsbruck website.