Julia Mancuso visits the Jewel of the Alps

I found out that Julia Mancuso was coming to town and I was pumped, then I was offered the opportunity to spend the day with her and I knew I couldn’t miss that chance!  For those of you who might be struggling with the name, Julia Mancuso is a (now retired) world class American World Cup ski racer and Olympic gold medalist, but she does so much more than that. She is a fantastic skier, fitness guru, role model, underwear model, philanthropist, brand ambassador and overall free spirit. One wonders how she ever has down time! 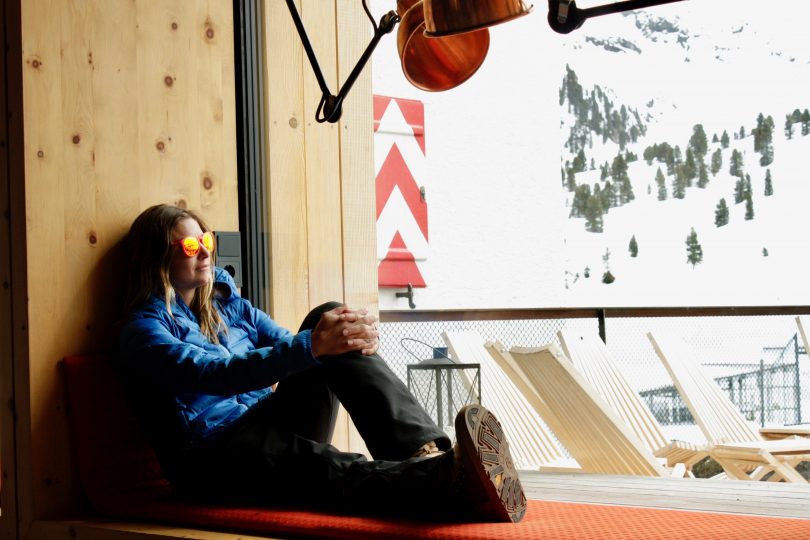 Sit back, relax and enjoy the view of Kühtai from the Jagdschloss lounge.

Combining business and pleasure, Julia was in Innsbruck last weekend to enjoy the city and get in some skiing. On Sunday the first stop was the Nordkette to go ‘figln’ or as Julia called it ‘snowlerblading.’ On the Hungerburgbahn and gondola up the mountain Julia got ready to roll by putting on her wolf hat and orange sunglasses. On that particular Sunday the Nordkette was closed to normal skiers so that a ‘figln’ event could take place. 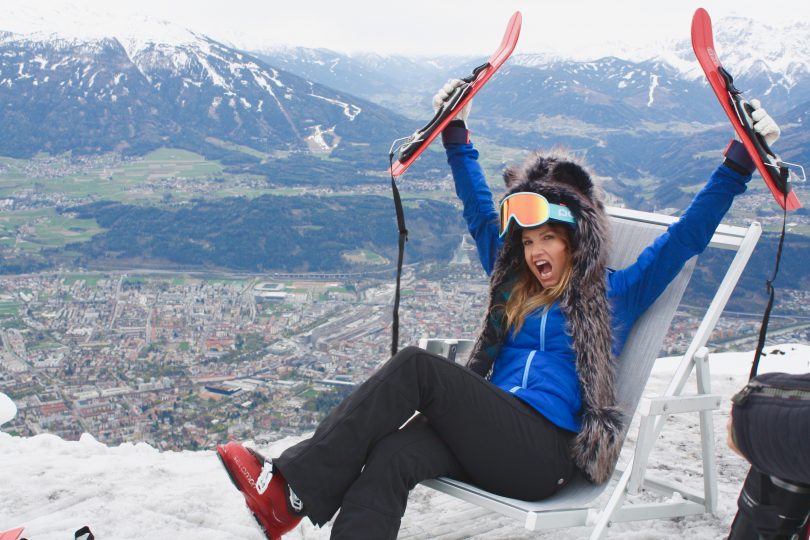 Celebrating after a successful run of ‘figln’ on the Nordkette in Innsbruck.

I’m not gonna lie, I was not familiar with that sport, but I was definitely intrigued. Essentially figln is spring time short ski skiing, and when I say short skis, I mean SHORT. These skis clip onto your ski boots but are tiny, barely extending beyond the back of the boot.

I have to say, I was pretty skeptical at first, making sure to listen attentively to the tips from our guide: lean back, keep your knees loose and enjoy the ride. Said and done. There are chutes and hip high paths in the snow where you drop in and glide through. The plus side of these chutes is when (if) you fall you don’t fall out of control and you can put your hands on the sides to keep yourself upright if you start losing your balance, making the whole thing seem less dangerous. 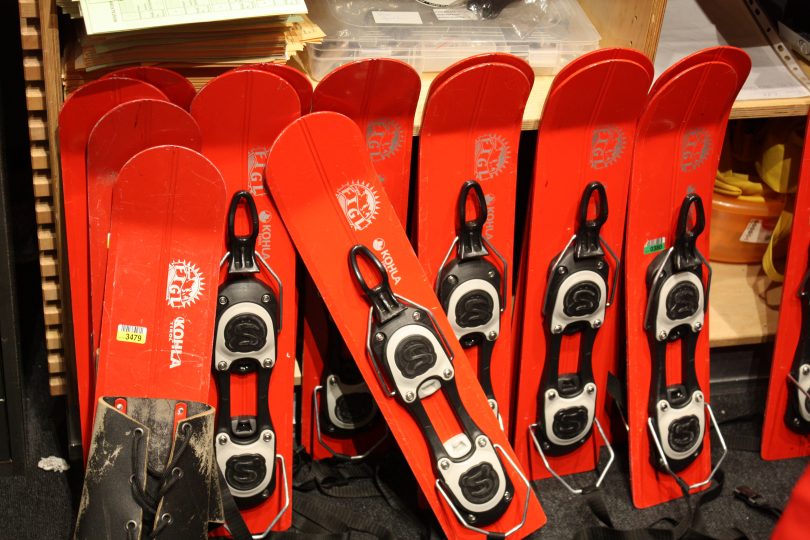 Getting fitted for some figln, check out how short these skis are!! It’s crazy!

Dropping In With Superhero Style

Oh my gosh, was it awesome! We were not able to stay for very long, as Julia had a very full schedule, but wow, did we have fun. The whole group was Julia, her husband Dylan, two people from SNOW Magazine doing a piece on Julia and skiing in Austria, as well as our ski guide. We were laughing our way down the hill, gaining speed, losing balance and ‘dropping in’ as Julia would say. She is known for her costumes – in the beginning of her career she wore a tiara, and she’s been photographed in a Ms. Marvel racing suit – and that day was no different: Julia came with a Wonder Woman cape and sunglasses. 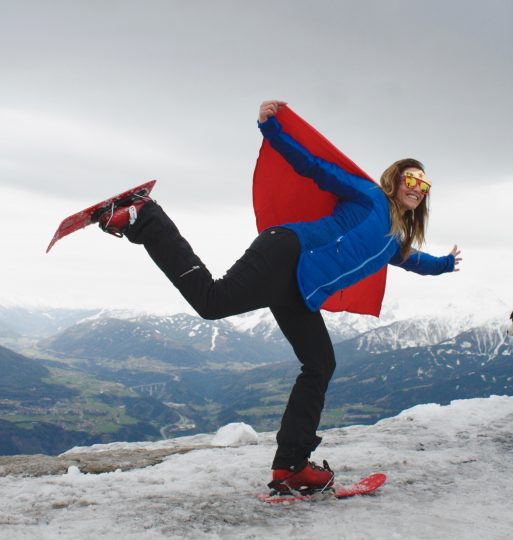 Rocking that superhero style with a Wonder Woman cape and sungalsses! I think Julia Mancuso was enjoying herself, what do you think?

After some figln fun it was time to leave Innsbruck and head over to Kühtai for lunch and to enjoy the last bit of skiing before they closed for the season. The Jagdschloss had a great view of the slopes and delectable Austrian cuisine, perfect to recharge and refuel. After lunch and a short photo shoot at the Jadgschloss restaurant, it was time to hit the slopes again, using every last minute until they closed the lifts. 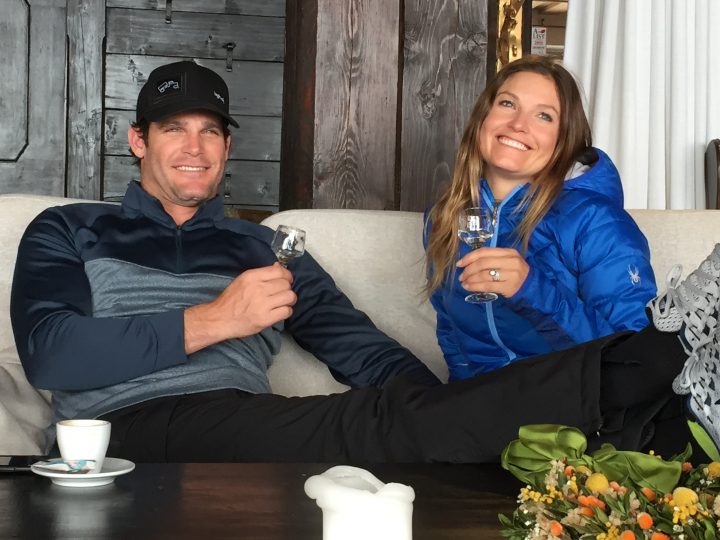 Julia and her husband Dylan, recharging with some coffee (and some schnapps) before hitting the slopes again!

It was such an honor to hit the slopes with Julia and her husband Dylan. The weather was nice and Innsbruck showed its best side. Or as Julia put it: “Innsbruck is just the perfect urban alpine city”. I can only agree.

Throughout the day, I found it entertaining to watch people recognize her and ask for selfies. The request was always met with a smile, I asked her if it was ever weird, being recognized, and she told me, “No, it’s not weird, usually people are really nice”. Julia’s positive way of being really stood out to me and it was an privilege to serve some drinks to the superstar. 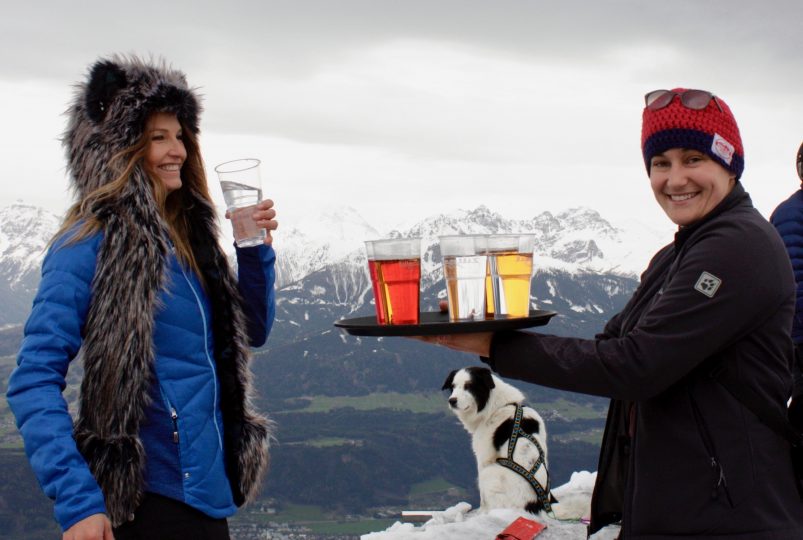 Serving a tray of drinks while still strapped into my figln skis was not so easy… but I managed.

F I G L N – AKA snowlerblading. It was actually invented here in the @visittirol mountains around Innsbruck. The first thought that crossed my mind was that I need to find some JD and a saucer to pay homage to one of my heroes @shanemcconkeyfoundation but seriously, what a fun morning! Up on the #nordkette in the spring time, these are the only skis you will see on the mountain. Some are even the cut off tops of old skis! Little tracks are formed in the spring snow and you cruise:) follow my story for more fun😂😂 what do you think… Would you gö I did!!! #myinnsbruck #feelaustria #visitaustria #lovetirol #innsbruck #funolympics #bestinsnow #juliasbestinsnow @innsbrucktourism @visitaustria @snowmagazine 📷 @dylandafish