“Servus Makro.”
“Hello Micro.”
Broad grin.
What sounds like a secret language is the common greeting of two student friends whose paths have crossed in the vastness of political economy. Today the sun is also smiling and our piste ski tour up the Patscherkofel starts around 10:30.

The Patscherkofel is not just a mountain. It is a legend. Franz Klammer defined the history of downhill skiing here in 1976 in his orange overall. The Olympic community has already gathered here three times: also in 1964 and 2012 at the Youth Olympic Games. Then as now, this mountain inspires. It is not for nothing that it is the home mountain of all Innsbruckers. In addition, the restaurant at the valley station is also called: a resourceful idea. 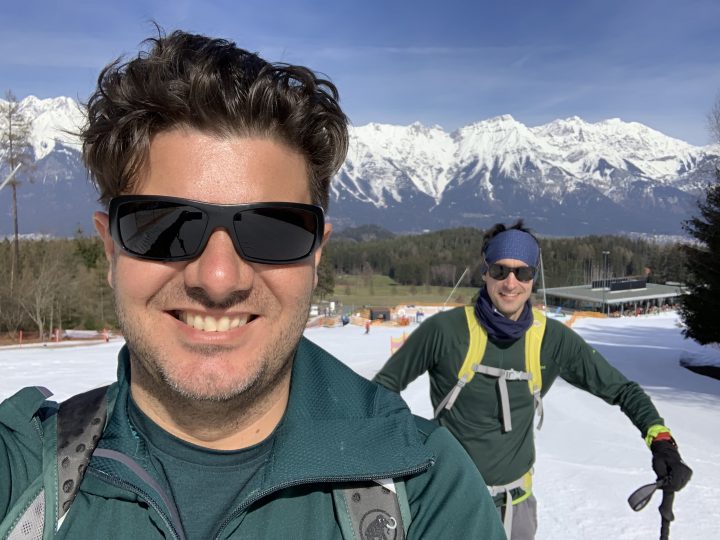 Here we go: macro and micro. We’re beaming with the weather and touring Innsbruck’s local mountain, the legendary Patscherkofel, on skis: © Marco Wegleiter

From the Patscherkofelbahn valley station to the top station

We follow the signposted route for ski tourers along the slope. Like every mountain around Innsbruck, the Patscherkofel is steep. The ascent track is only slippery in a few places, otherwise we both have good grip. We walk up the mountain at a leisurely pace, casually walking side by side and behind each other. It’s like jogging, only higher up. Enjoying nature, reminiscing and thinking about the future. After half an hour, thirst makes itself known. 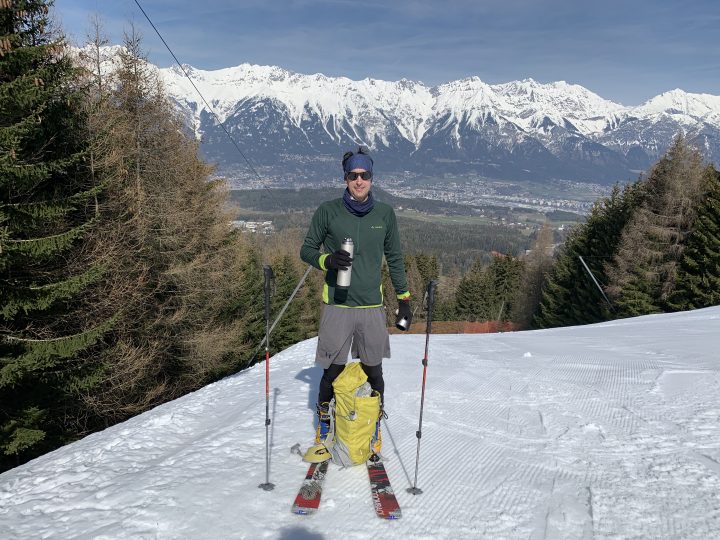 What a panorama for the first break. After a good 300 metres in altitude, the view of Innsbruck widens. © Marco Wegleiter

And when you think it’s not possible anymore, it gets even steeper. Of course, the more ski tours you do, the more you develop a resistance to steep slopes. But it’s always surprising how fast it goes uphill. But we are rewarded with incredible views. 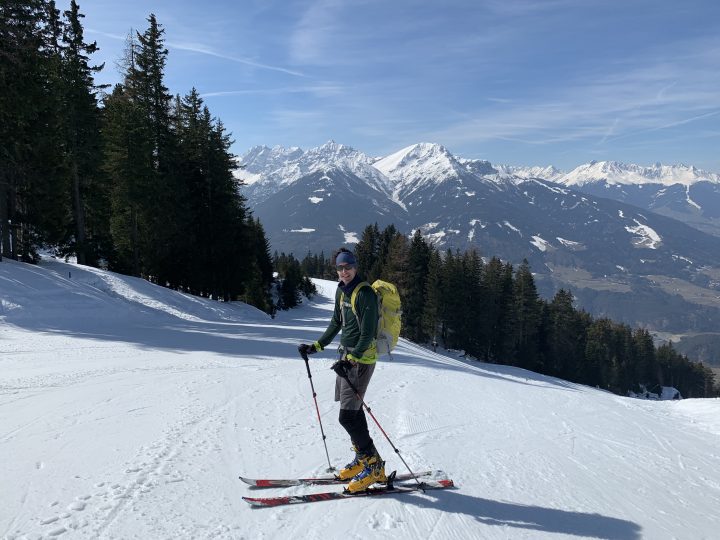 In the background the sheet. A sensational slope in spring on the east side of the Nockspitze. © Marco Wegleiter

At the middle station we are already at 1,716 metres above sea level, knowing that we will soon have reached our destination for today. 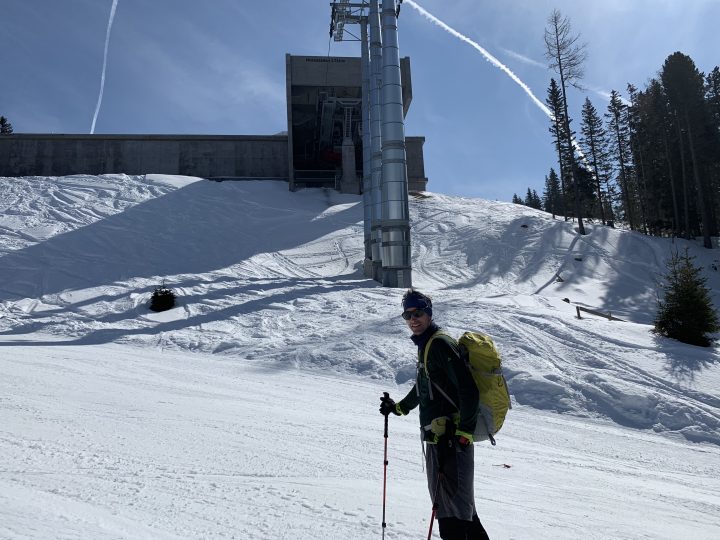 Middle station of the Patscherkofelbahn at 1.716 meters above sea level. © Marco Wegleiter

And I looked at the calendar,

heit geht da Wind. Attwenger, the interpreter of this song, is an Upper Austrian. Presumably he was inspired to write this text on the Patscherkofel. It really whistles. Yes, this is also our local mountain, the Patscherkofel. The wind blows over the Wipptal to the volcanic looking mountain. But we wouldn’t be Innsbruckers if that bothered us. I think it simply belongs to it. And besides, that’s when you really feel yourself. 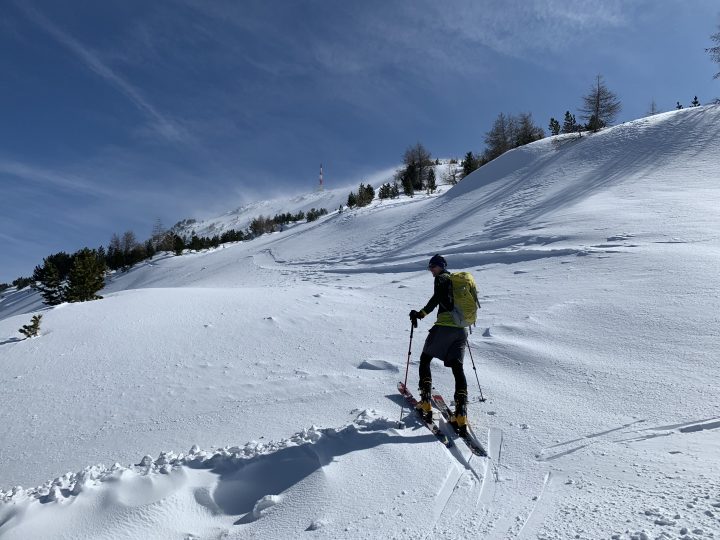 Considered and immediately discarded. The wind whips at the summit of the Patscherkofel. We stop at the refuge. © Marco Wegleiter

The last view of our ascent is also special. The Patscherkofel shelter defies wind and weather and is the institution on the local mountain. since 1887! By now it is storming. We stop immediately. The skinning has time. 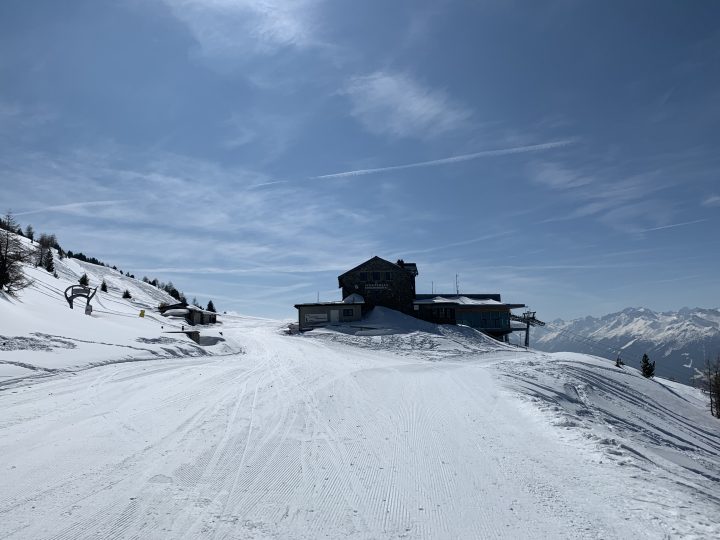 Because the wind has turned into a storm, the gondola remains out of service for today. This means we can max out the waist of our carving skis and use the whole slope. The snow picks a bit, so always stay deep to avoid crashes. 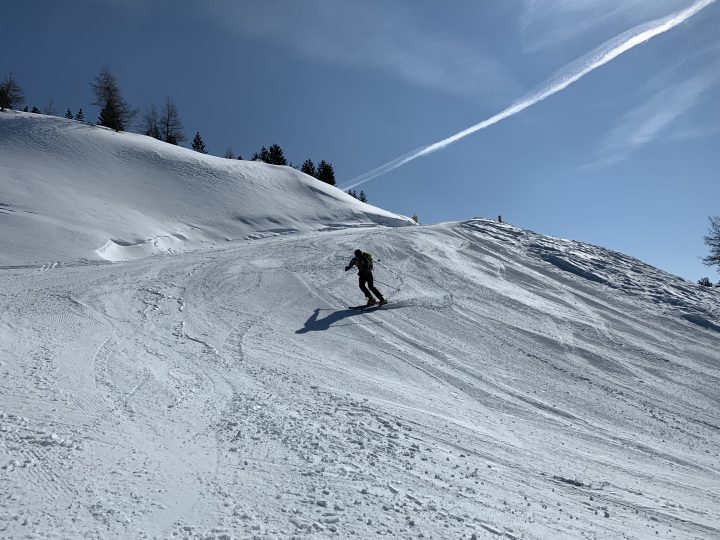 Simple syllables and stunning sentences are sensible solutions. I write about moving experiences in the ever changing mountains and valleys from spring through winter.

The year is coming to an end and the most contemplative time begins. The smell of cinnamon…

When a conspicuously large number of people, especially young people, stroll through Innsbruck's old town in…

Perhaps this is one of the most important posts I've written to date. At least the one…