Mother nature has been dumping record amounts of snow upon Innsbruck, its ski resorts, and surrounding villages.  Weather this severe creates lots of hard and sometimes dangerous work for Innsbruck’s snow clearing heroes.

Recent reports have stated that this is the most snowfall in thirty years or more. When snow conditions become this treacherous, most of us are happy to stay indoors sipping on hot chocolate while binging on our current Netflix obsession. Unfortunately, it’s not so “chill” for everyone. It’s times like this when many city employees spring into action to assure the city continues to run smoothly. 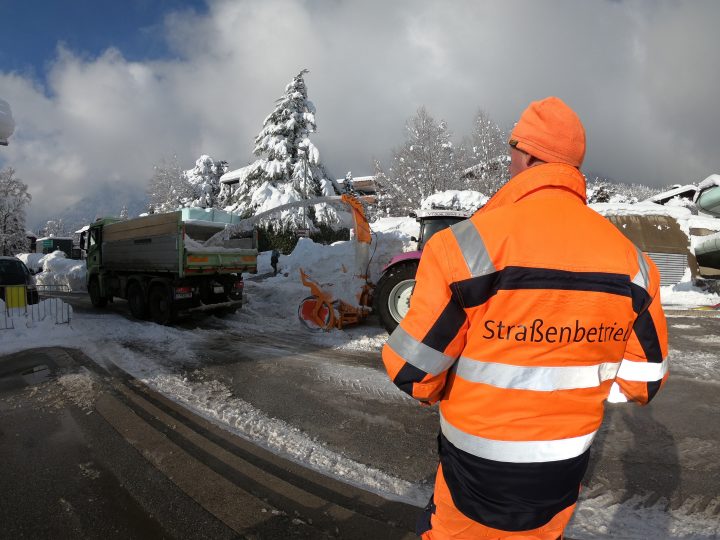 Record snowfall in Innsbruck during January 2019

Innsbruck doesn’t freeze to a stop like New York City recently did over six inches of snow. For comparison, In 7 days, we had as much snow as some of the snowiest ski resorts on the planet get in a month! Nordkette had over seven meters of snowfall in seven days. Nicolas Metz from the Avalanche Commission provided more detail:

“Since opening of the ski resort on 15th December 2018 we have received 1085cm of accumulated snowfall. On top of this, we have to assume about 2m snowfall before the opening, and during the time we could not get up the mountain. All together, Nordkette has seen around 12m of snowfall so far this winter, over 9m of which fell in the period between New Years eve and 15th January. In this period we had only 3 fairly sunny days, with snowfall every day through the 16 days.”

“While the weather station showed a max of 4.5m of actual base [fresh snow compresses under its own weight], due to experience and references in the terrain and barrier structures we assume total snow heights of around 6m in most parts of the Nordkette range.”

Clarifying how the data was collected, he explained:

“Basically we run an observer station. Every day we check the new snowfall and make observations concerning temperature, avalanche activity and much more. All this data gets collected and are public in the observer station of Innsbruck Seegrube.”

To give that amount of snowfall some perspective, Mount Baker’s (officially the world’s snowiest ski resort) highest ever MONTHLY snowfall is 269 inches/683cm.

To keep the city from grinding to a sudden halt, Innsbruck’s snow clearing team came to the rescue. 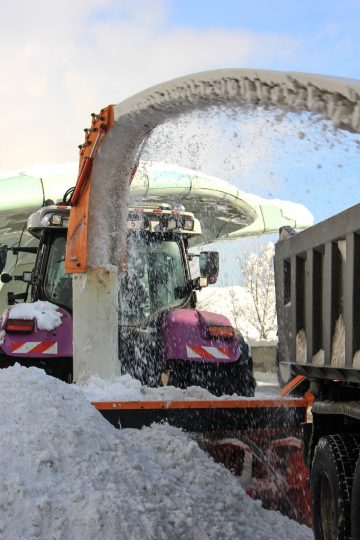 Snowcutter filling a dump truck within a couple of minutes

What do the snow clearing teams do to keep Innsbruck running?

Despite the challenging, and even dangerous conditions, these unsung heroes spring into action before many of us rise out of bed. Close to 100 brave workers operate 92 vehicles throughout the city. Some of their equipment includes shovels, snow blowers, snow cutters, ice picks, dump trucks, and excavators.

Tasks carried out by these hard working individuals include clearing fallen trees, digging out vehicles, removing dangerous amounts of snow from rooftops, and clearing roads and paths. In addition to clearing the roads after the snowfall, they also treat them with salt brine solutions before a storm hits to help with the aforementioned duties. 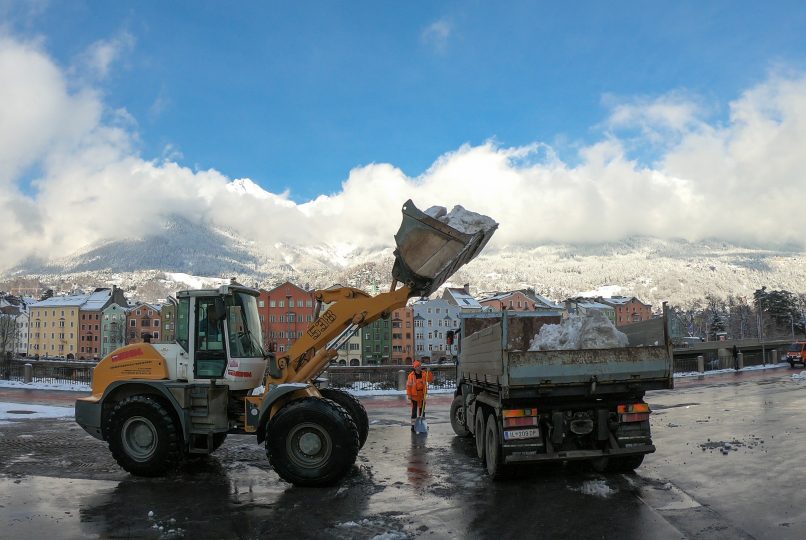 I’ve found myself thinking of emergencies that may arise during extreme snow conditions. For example: how would pregnant women get to the hospital? How do medical professionals get to and from work to deliver babies and keep people healthy? How do the elderly and handicapped get around? What happens when someone needs an ambulance? Even random things that may not be as important, like – what if I run out of toilet paper?

Thanks to the hard work of the snow clearing teams, after a snow storm Innsbruck residents are able to travel safely to and from work, to the store to buy groceries, and to hospitals and pharmacies for medication or treatment. Too often we take things for granted – having these heroes available to keep everyone moving freely is certianly one of them!

Next time you see the crew clearing the roads, make sure to thank their efforts with a salute. I’m sure it will bring a little warmth to their hearts knowing that we appreciate their hard work. 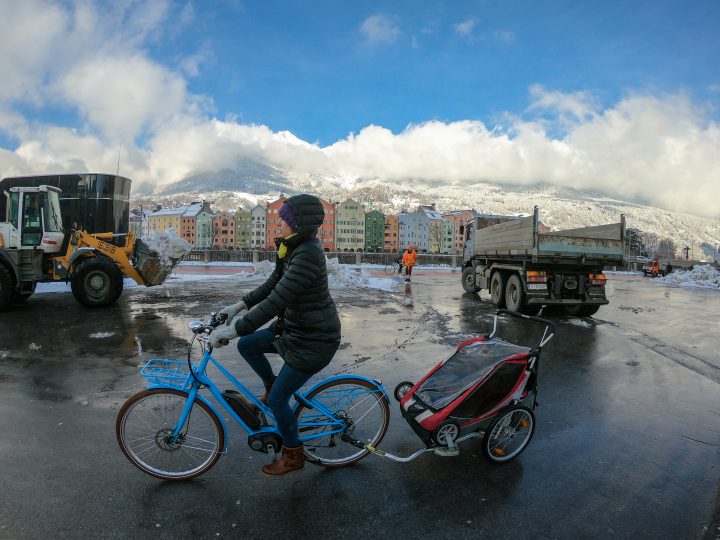 Winter sports enthusiasts may be thrilled to hear about this much snowfall, but please consider the avalanche warnings and other hazards imposed by this much snow. A few ski resorts and surrounding villages were temporarily inaccessible due to the “schneecaos” (snow chaos).  All ski resorts are now fully operational again, but keep an eye on the Innsbruck interactive skimap to stay informed on where to go for skiing. 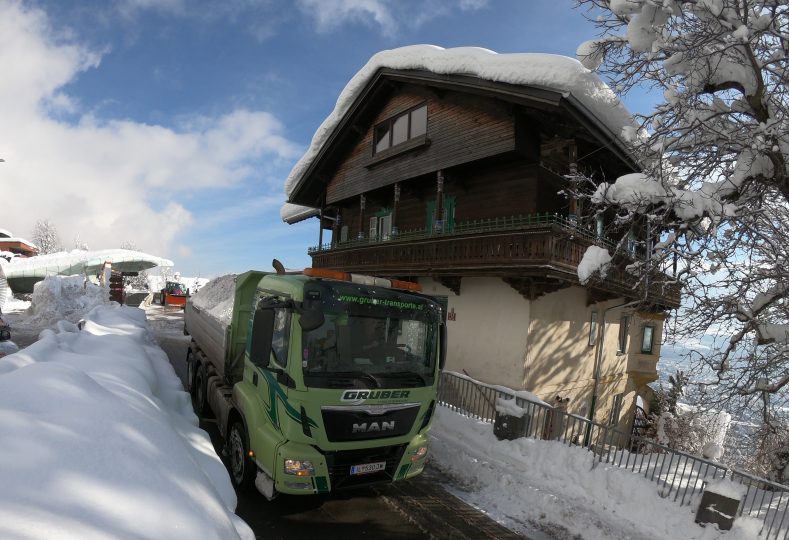 During particularly heavy snowfall and periods of high avalanche danger, we recommend you to check road conditions on the ÖAMTC website before travelling to Innsbruck and/or onwards to the surrounding villages. Some villages, particularly the ski resorts and those at high altitude, are not always accessible via road in difficult weather conditions such as heavy snowfall. The ÖAMTC website provides up to date information on road closures, traffic restrictions, and snow chain requirements. You can find the current avalanche and snow report here.