A4 gallery in the centre of Innsbruck is the location for a fascinating new exhibition.  For the first time in Austria, you can see a selection of posters depicting unique, gaudy and gruesome paintings designed to advertise films showing at ‘Video Club’ screenings in Ghana.  I spoke to curator Albrecht Dornauer – an Innsbrucker – about the exhibition.

These posters are mad! How did you first find out about the whole Ghanaian film poster culture?

AD: I saw an exhibition of them in Berlin about 11 or 12 years back and it was so unique and bizarre it stayed with me.  I liked that they were so over the top.  These posters are personal interpretations from the painters so they’re so informal, they’re just one person’s viewpoint. A bit like Trump on twitter! They’re so naive too.  What happens is, the painter doesn’t see the film, maybe just a still or two, but they have the movie explained to them. So it’s mostly a product of the painter’s imagination.  That’s why it’s true art.  So different to the corporate nature of Hollywood marketing where everything goes through several meetings, committees and so on. 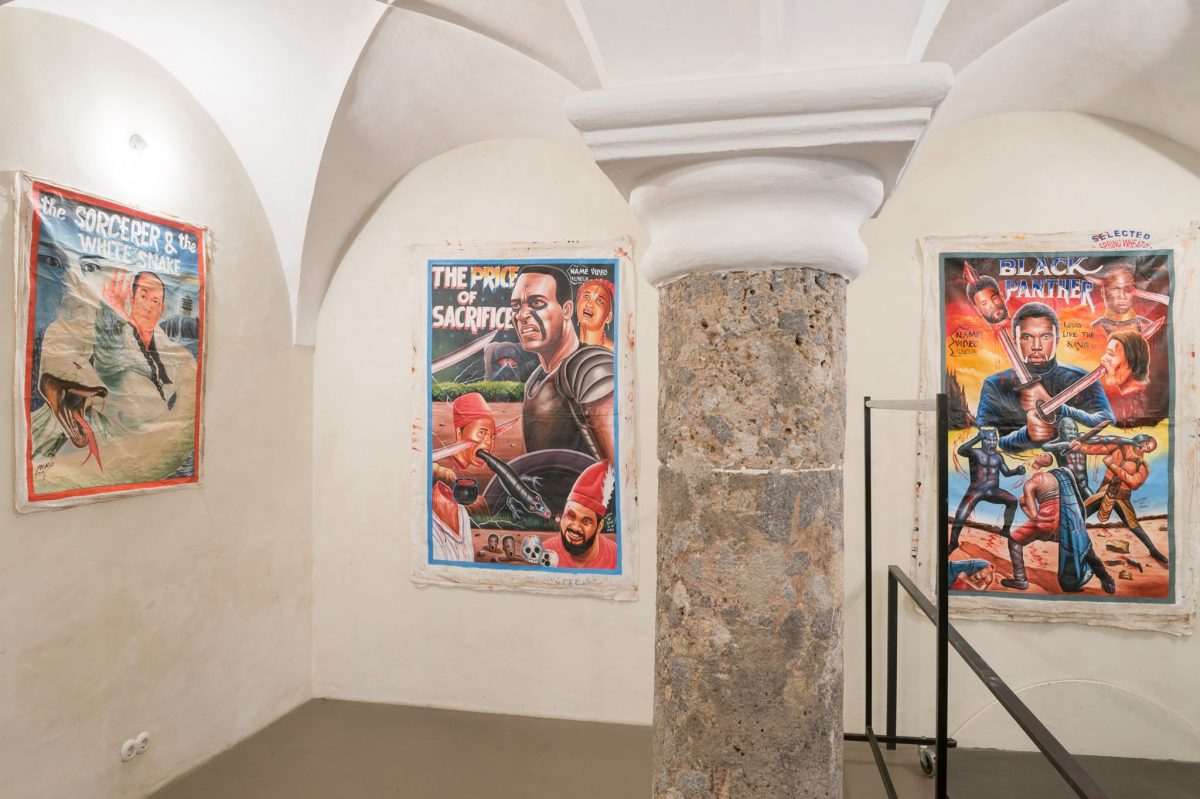 So these posters are adverts?

AD: Yes, that’s all they are really.  They would hang outside ‘Video Clubs’ in Ghana, which is like their equivalent of the cinema. Buildings that would show VHS copies of the latest Hollywood, Nollywood (films produced in Nigeria, of which there are MANY!) and Kung Fu movies. The Hollywood films that go down best in West Africa are action films and anything involving witchcraft. The posters used to get thrown away when the films stopped showing! It wasn’t until the mid-90s that they started getting collected.  It was a Dutch guy who started collecting them.  They are too good to waste.

Tell me a bit more about ‘Video Clubs’

AD: They’re social places.  The whole neighbourhood would come together to watch films, football and so on.  They’d usually have a bar and kitchen.  It’s dying now sadly.  The whole poster painting thing is becoming a lost art too. Printing is becoming more accessible.  So, from about 2004 onwards it was more in the countryside because the big cities had copy shops from about that time on.  Obviously, printing copies is a lot cheaper than hiring a painter.  But over the past ten years or so it’s becoming rarer and rarer in the countryside too.

How did you get hold of the posters?

AD: At the exhibition I attended in Berlin over a decade ago I bought the book which accompanied it.  I went to Ghana to go record shopping last year but I had these posters in mind too.  So, looking at the book, I saw some of the posters had the telephone numbers of the artists at the bottom.  With a magnifying glass I was able to read three of the numbers.  Two of them still worked! So, with the help of a Ghanaian friend, I was able to talk to the artists directly and negotiate.  Obviously, that was helpful because the prices would be a lot higher for a foreigner! I bought around thirty when I was there and have bought a few more since that I had sent over.  If you see ‘Video Club’ on the poster it means they were used as adverts.  Some are simply sold as pieces of art at market stalls.

Do you have any personal favourites?

AD: Yeah, ‘The Price of Sacrifice’, which is a Nollywood film.  It’s so over the top, I love it!  Also if you look at the Expendables 2 poster, it says starring ‘John Rambo’ not Sylvester Stallone. Shows how they are so personal.  To that painter Stallone is Rambo!  It’s so informal.  That’s why they’re great!

Tell us a bit more about the posters you have at the exhibition.

AD: There are about fifty, from four different painters.  All the posters are painted on used flour sacks. And they’re big.  So I wanted a gallery that would suit the posters.  I always had A4 gallery in mind for this exhibition. It’s a great building and there’s one small room with really high walls.  I always thought that room would be great for exhibiting these posters.

Is this the first time they’ve been exhibited in Austriä

AD: Yep! There have been similar exhibitions in  London and Berlin but this is the first in Austria.  I’d like to do this in Vienna eventually too but as an Innsbrucker it’s great to have them here first.

Can you sum up what appeals to you about these posters?

AD: I love that they’re never ‘too brutal’ or ‘too stupid’   The more extreme they are, the more people it attracts! It’s such a contrast from the corporate nature of Hollywood marketing.

‘Nollywood Horror’ is showing until the end of December 2019 at A4, operated by Garage Span and Karl Gostner, Angerzellgasse 4, near Treibhaus.  Entry is free.

LUMAGICA in the Hofgarten: A luminous journey around the world

Anton Prock collects stories. As an art historian, that's hardly surprising. But the fact that he can…

A row of houses as a world-famous postcard motif. The unique late medieval houses of Mariahilf,…

The Dogana – from opera house to ruin and event location