It’s believed that the Summer Solstice has been celebrated by humans from as early as the Stone Age. Throughout history, the celebrations have conveyed various themes from region to region, with bonfires playing a central role in many.

In Tyrol, things are done a bit differently. The celebration represents identity and togetherness, and continues to help Tyroleans keep a firm grasp on their cultural traditions despite the rapid growth and outside influences.

In modern times, the Summer Solstice has been Christianized to represent St. John’s Day. Before Christianity, the celebrations existed with different – often pagan – names and traditions. Bonfires have always been a common theme, along with other more ‘exotic’ elements like walking over burning coals, pretend marriages, streaking, skinny dipping, and even baby making!

In typical Tyrolean fashion, the bonfires here are set ablaze on high mountain peaks. No flower crowns – only hiking boots! Local clubs, organizations, and groups of friends plan the fires for weeks in advance. Some even take vacation time to spend days carrying wood up to the peaks.

The weather in the mountains does what it wants when it wants, and even in mid June rain and even snow is no stranger to the summits around Innsbruck. This year, for example, threats of rain caused the celebration to be postponed for a week. However when the time comes and the sun begins to set, the fires begin to blaze… 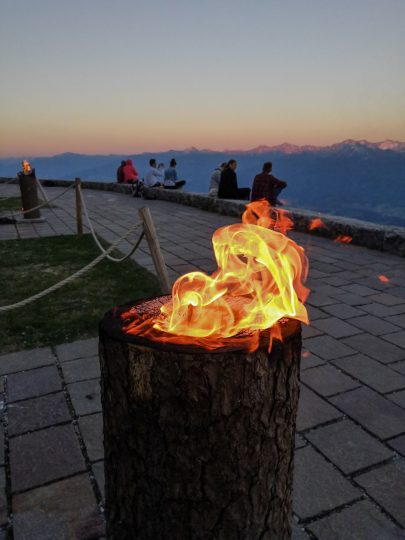 One by one, the bonfires begin to illuminate the ridgelines and spines of the Alps, while others adorn the mountain faces with religious symbols – most commonly, hearts and crosses. The hearts and crosses celebrate the festival of the Sacred Heart of Jesus, which commemorates the Oath taken by Tyrolean leaders that offered Tyrol to the Sacred Heart of Jesus in exchange for deliverance from the invasion of the French troops.

We joined the celebration by bringing a pot luck picnic to Nordkette. Once night began to fall over Innsbruck, the fires began to dot the sky. It’s difficult for me to describe the number of fires from Nordkette, to Patscherkofel, Glugenzer, Serles, and beyond into Stubaital – it’s like something from a film. Remember when the beacons of Gondor were lit in LOTR? 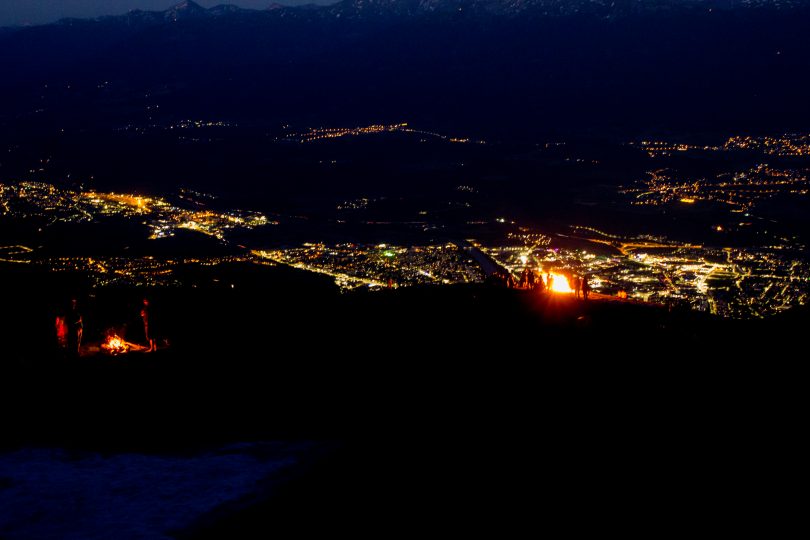 Lighting bonfires for the Summer Solstice is still going strong in the Tyrol. We’re no longer under threat of invasion, but the bonfires continues to serve as an opportunity for loved ones to gather and welcome summer. I will definitely be attending next year, and hopefully I can join a group making a fire too.