An Easy Hike in Fresh Snow: from Innsbruck to the Umbrüggler Alm

A record-breaking amount of snow? How amazing! This year the snowfall has been unusually heavy in our region. In January, it snowed 7 meters within a period of 7 days on the Nordkette, Innsbruck’s shield in the north. As I grew up next to the Tropic of Cancer and have very limited experience with snow, I didn’t even know how to visualize this spectacular amount! Naturally, I longed to see it with my own eyes. Although at one point the public was advised against entering this mountainous area (due to avalanche danger), the restriction was soon lifted. What I was waiting for was just a super sunny day!

When that sunny day came around, I was only free in the afternoon, so I decided to visit the Umbrüggler Alm on the Nordkette after lunch, knowing that I could walk this distance with ease. It actually snowed on the previous night, so fresh snow was guaranteed!

German words are often endlessly long, but many are compound words. Their elements are strung together without spaces or hyphens. © Ichia Wu

For a casual walk like this, investing in special equipment is not really necessary. Waterproof hiking boots and gloves are ideal for obvious reasons. Wearing a hat protects you from the fine snow falling from the branches or blown by the occasional wind. I did bring my trekking poles as I always feel more surefooted if I use them. However, this time I only used them briefly on my way down. I brought a bit of water but left out the sunglasses because the route would be through a wooded area. From my experience I knew that I shouldn’t dress up too warmly and clothes with ventilation zips are really versatile. That’s all! Time to catch the bus! 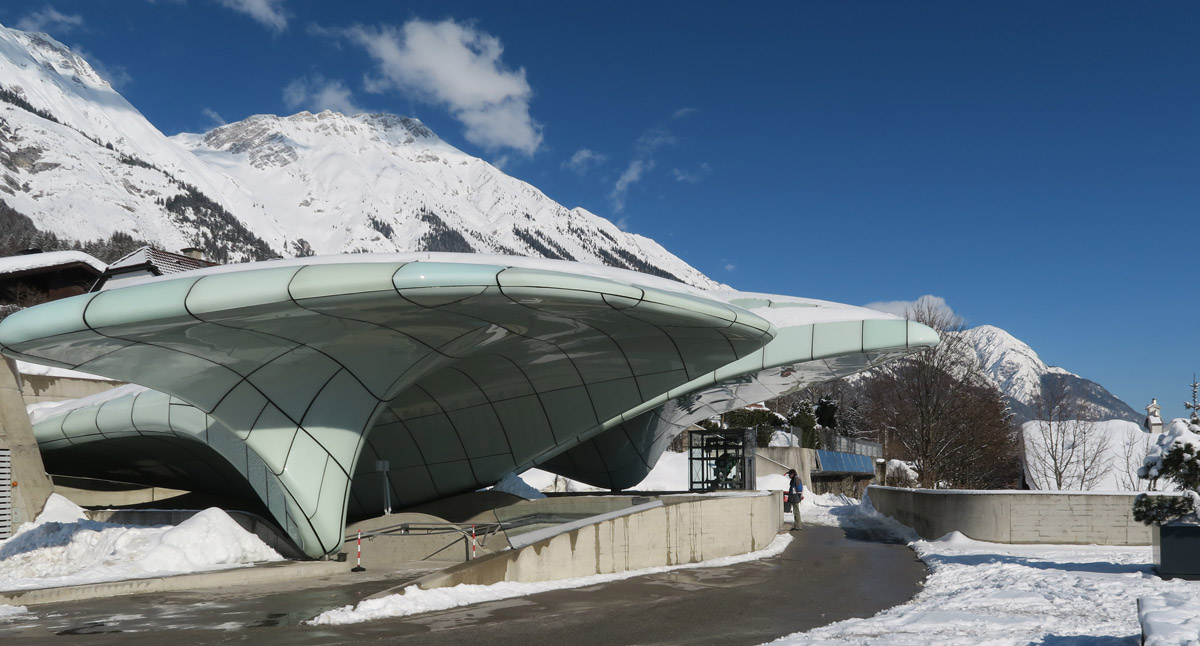 One of the Hungerburgbahn stations designed by Zaha Hadid © Ichia Wu

My walk started near the upper station of the Hungerburg funicular (Hungerburgbahn) at 860m above sea level. I took the bus though because I approached Hungerburg from the south. If you have an Innsbruck Card or would like to combine the funicular experience with the hike, going there by Hungerburgbahn is also recommendable.

I had been to the Umbrüggler Alm several times before, but this was my first time going there alone. To be honest, I wasn’t sure that I wouldn’t take a wrong turn somewhere, since I planned to take a different and less straightforward route.

Nevertheless, this area is the backyard of Innsbruck and the yellow trail signs at key junctions are reliable. There are also temporary but noteworthy signs attached to the permanent ones. They inform you about the routine closure of the Alms, diversions or warnings. 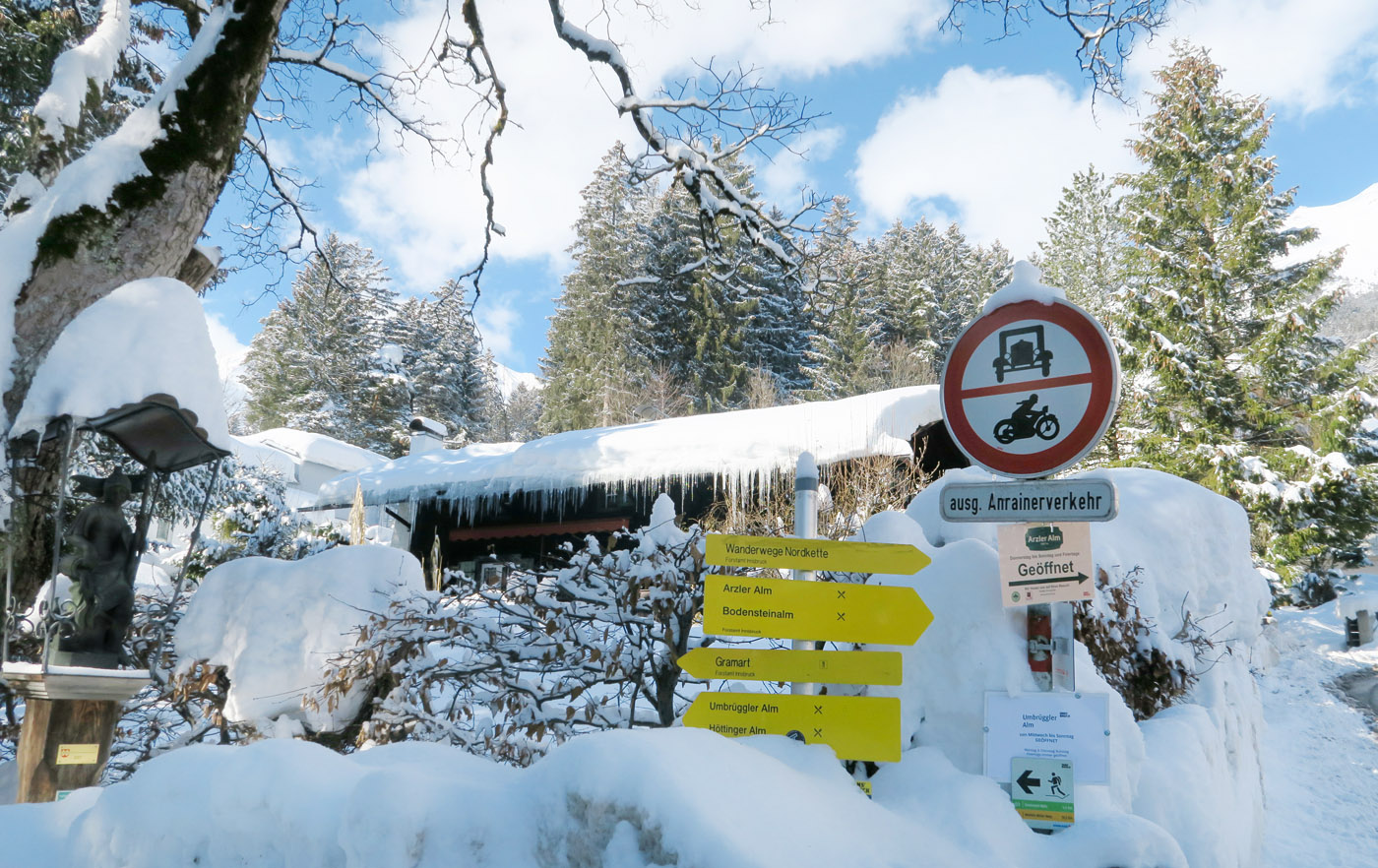 The entrance to the winter wonderland © Ichia Wu

The thing is that these notes are in German only… Fear not, though, here are some common words:

Throughout my journey, I had steady signal reception and internet connection on my mobile phone. I didn’t really need my phone for navigation as the signposts were easy to spot even in snow. However, GPS was useful to check my progress, since I paused on the way very often.

The Forstweg (forest path) I took is actually shown neither on Google Map nor Bing Maps but is marked on OpenStreetMap. 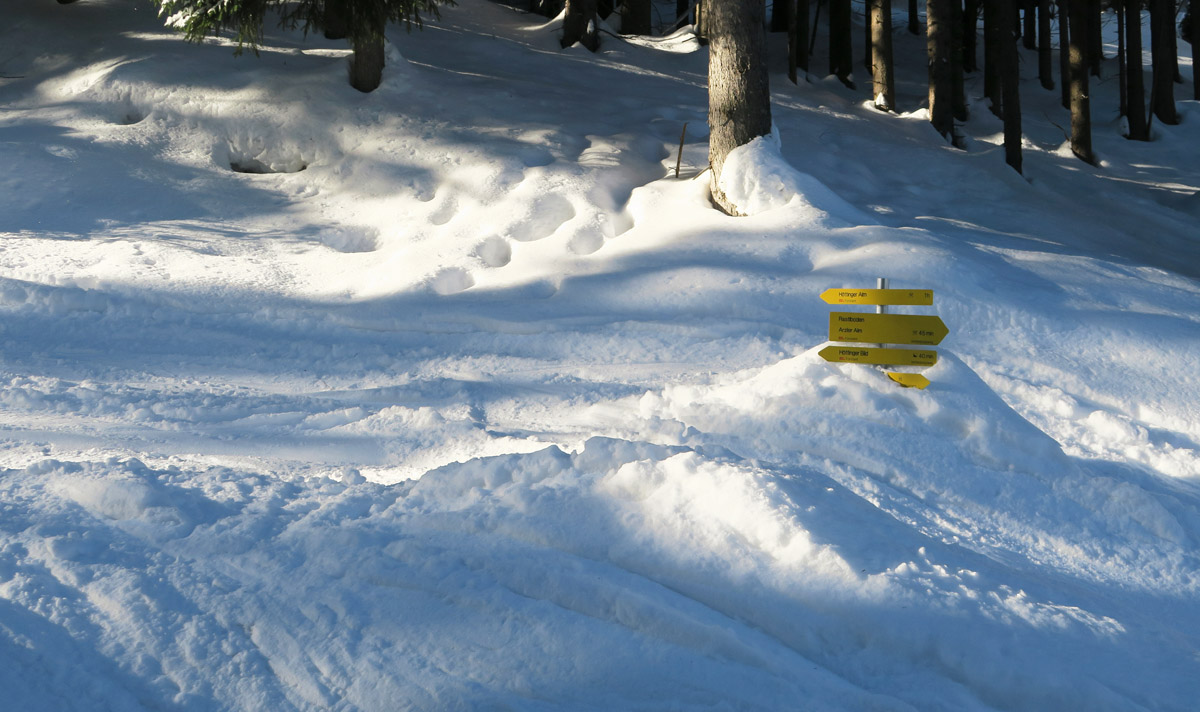 It’s there when you need it. © Ichia Wu

The First Stretch: the Residence Area in Hungerburg

Firstly, I walked along Gramartstraße towards the west through the residence area in Hungerburg. In this more or less level section, there were many interesting buildings blanketed with snow. 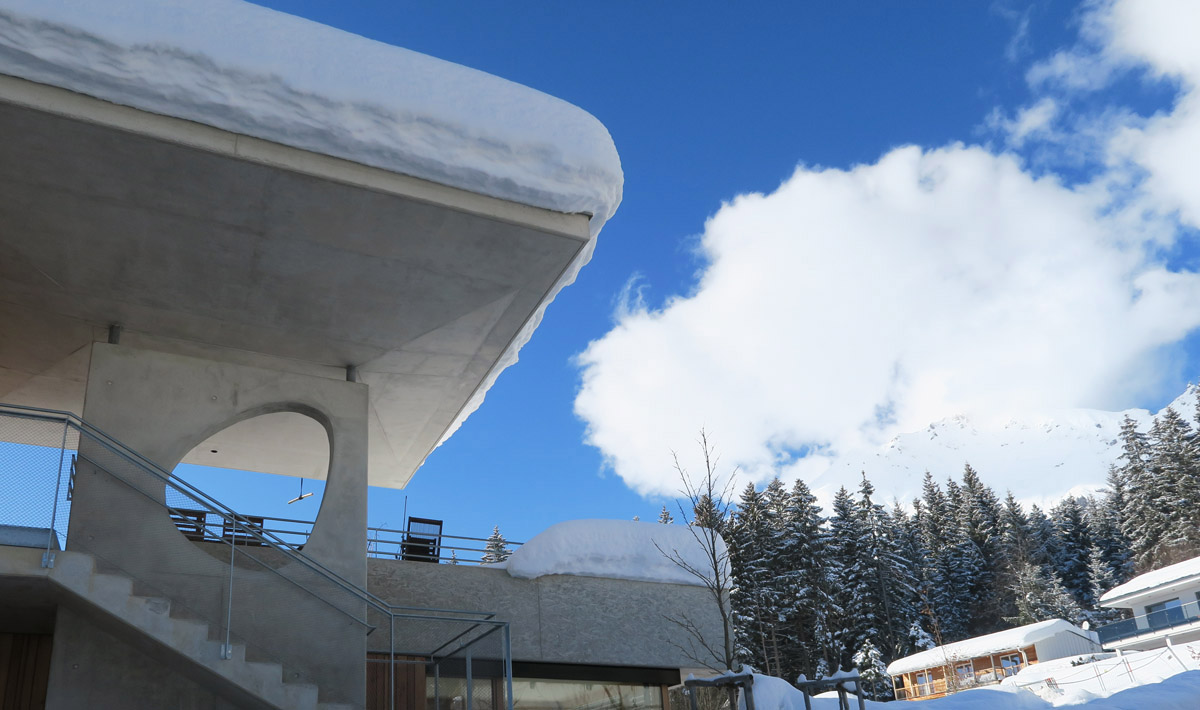 Then I turned right onto Umbrüggleralmweg and it wasn’t for long before a sign of “Forststraße” (forest street) appeared. From here basically the trail was divided into two sections. The first section, Forststraße, was steeper, not cleared and carpeted in loose and fresh snow. 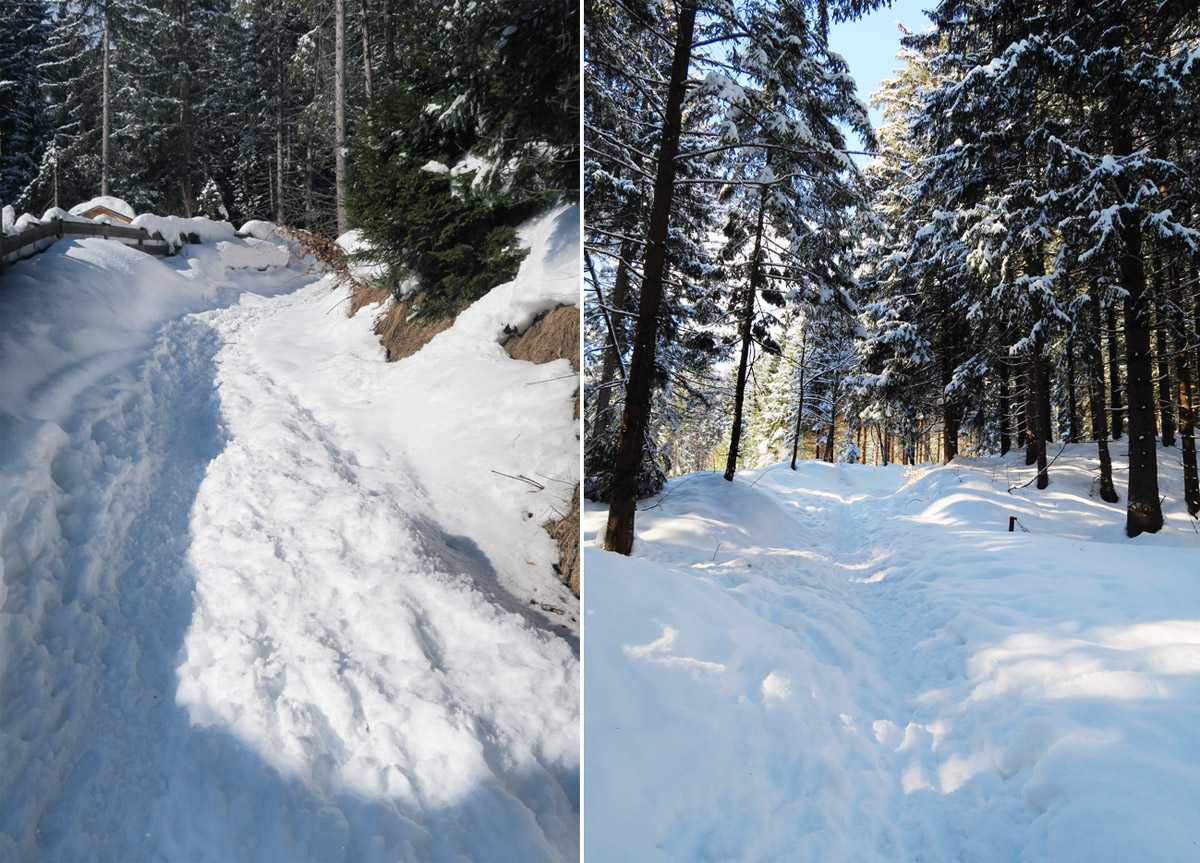 The fine powder under my boots felt like the sand on the beach – the force of each step was partly absorbed by the snow. © Ichia Wu

Forststraße ends at a crossroad, meeting Katzenbründlweg on the left. It was named after the nearby spring Katzenbründlquelle, the source of the oldest spring water supply system serving the Old Town in the 15th century. 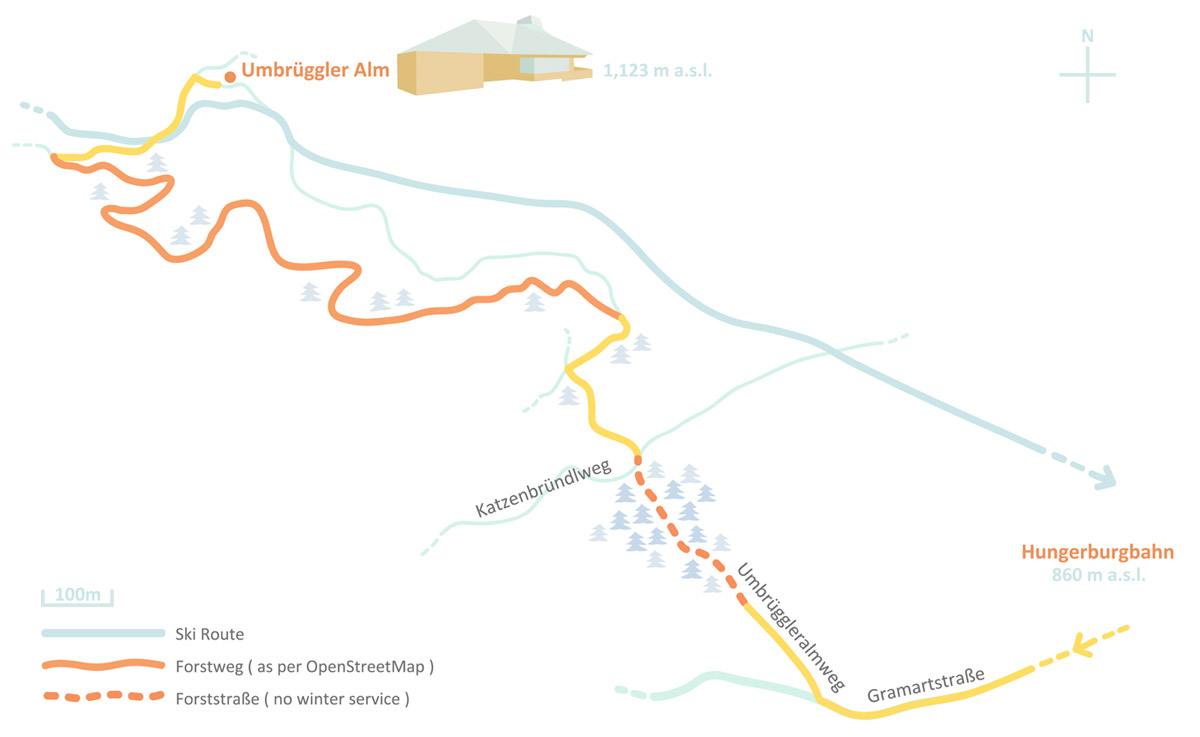 The rest of the trail was coated by a compact layer of snow and was winter serviced. This part is longer in distance but fairly easy to ascend. The snow walls on the side were impressive. 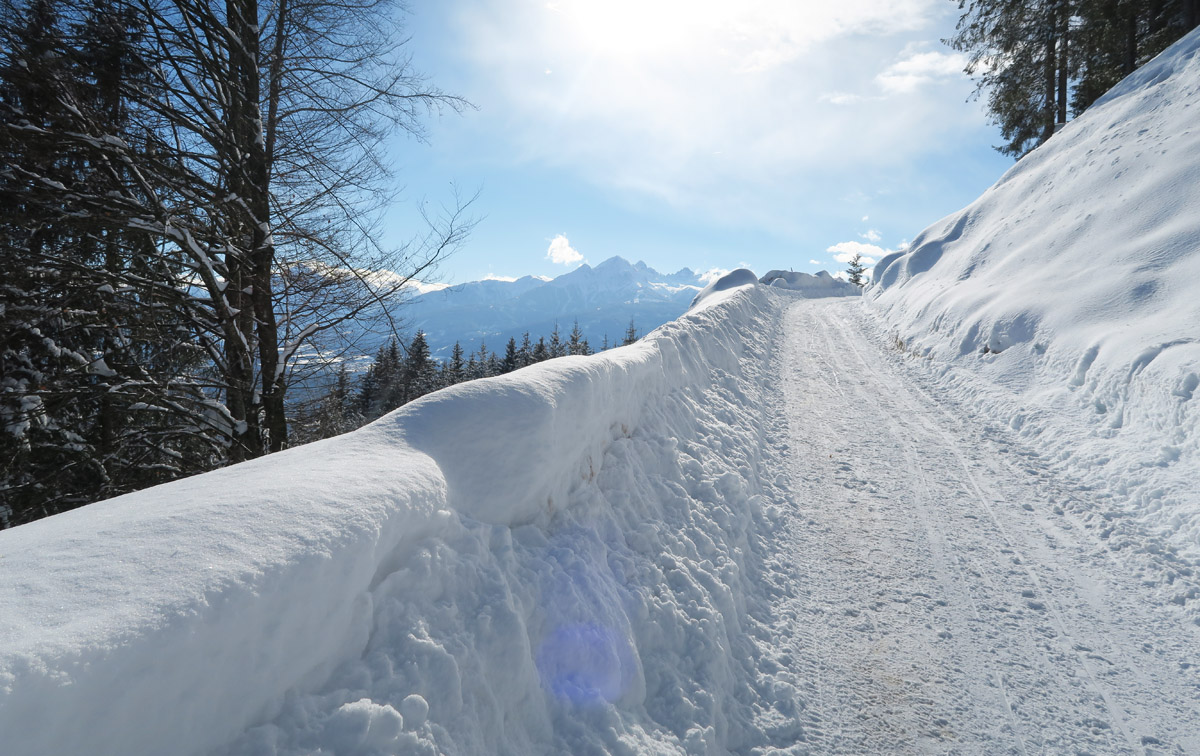 The final part of the route crosses and briefly overlaps with the ski routes. Watch out! 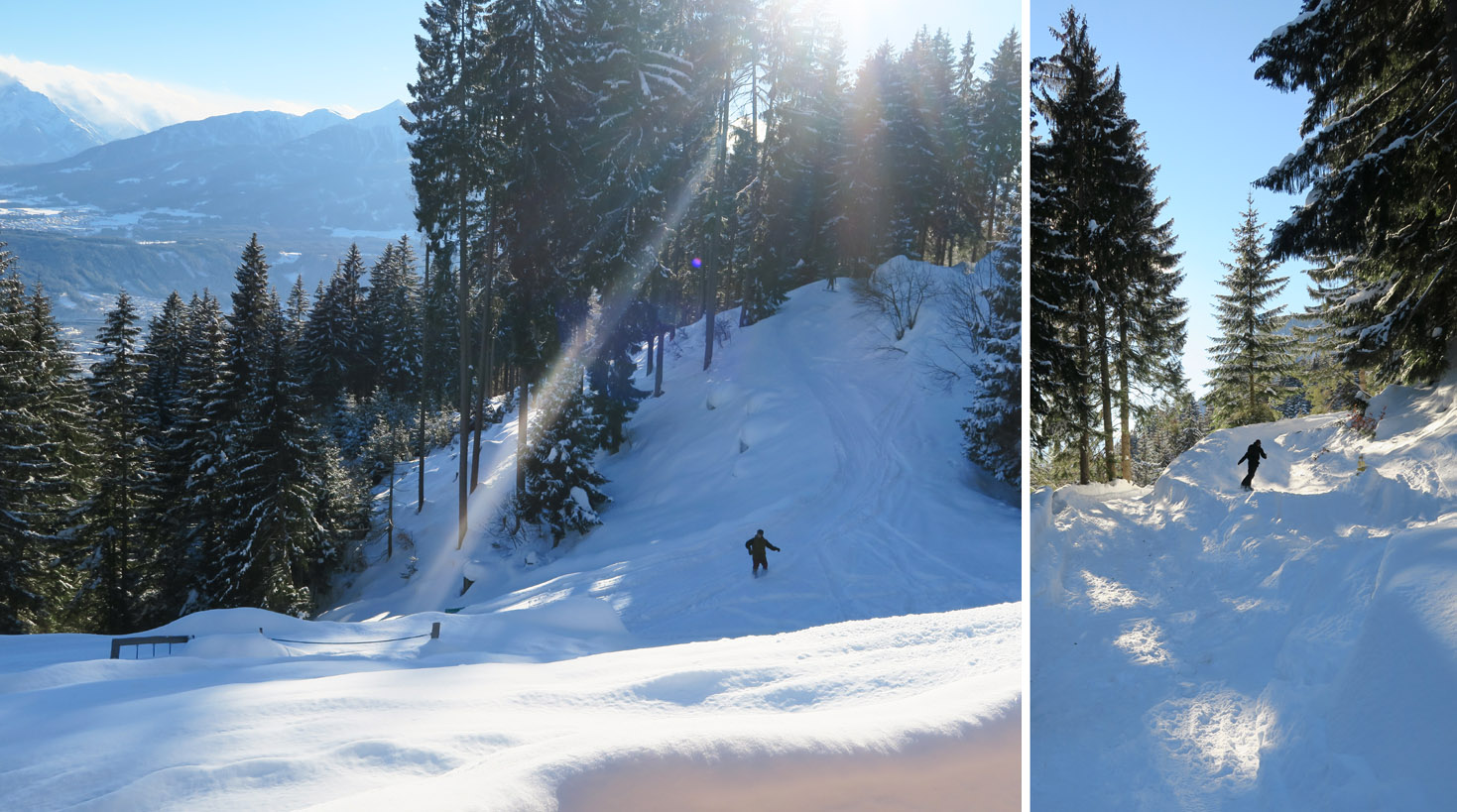 The entire ascent took me about an hour and I arrived at the Umbrüggler Alm around 2pm. It was a Thursday afternoon and there were only a few guests in the Alm, including skiers taking a break on their way down. 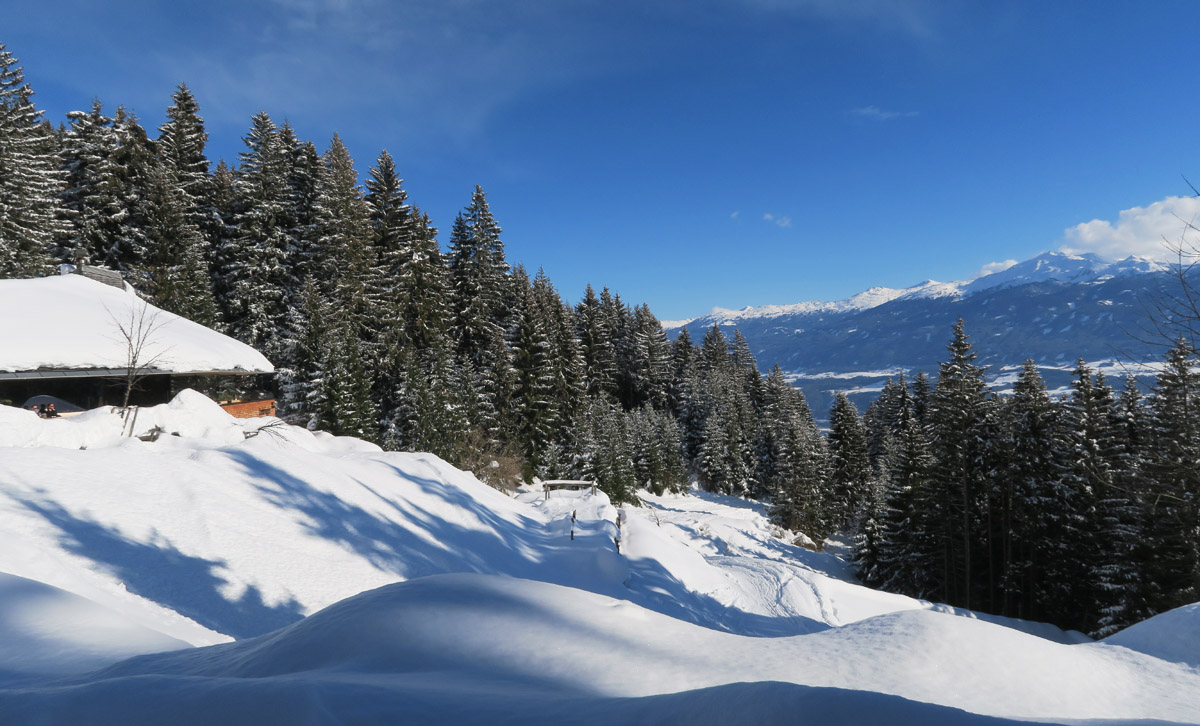 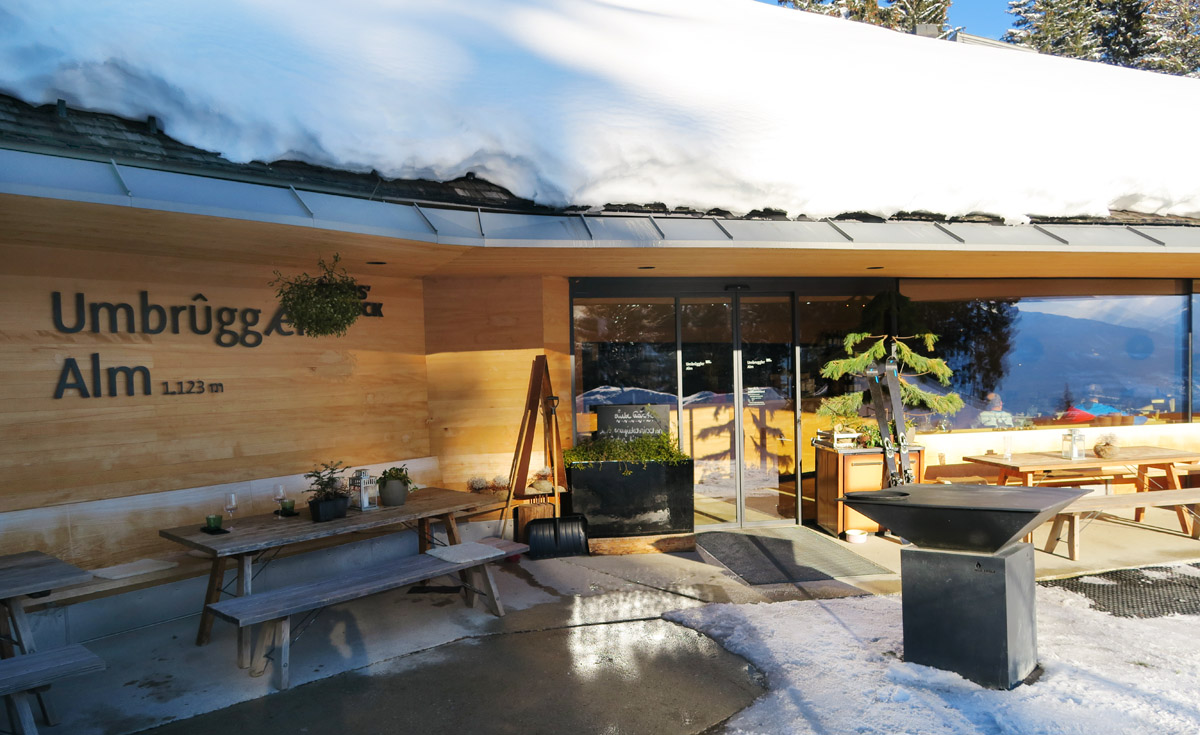 Built in 2015, the Umbrüggler Alm inherited the site of the long-gone predecessors. © Ichia Wu 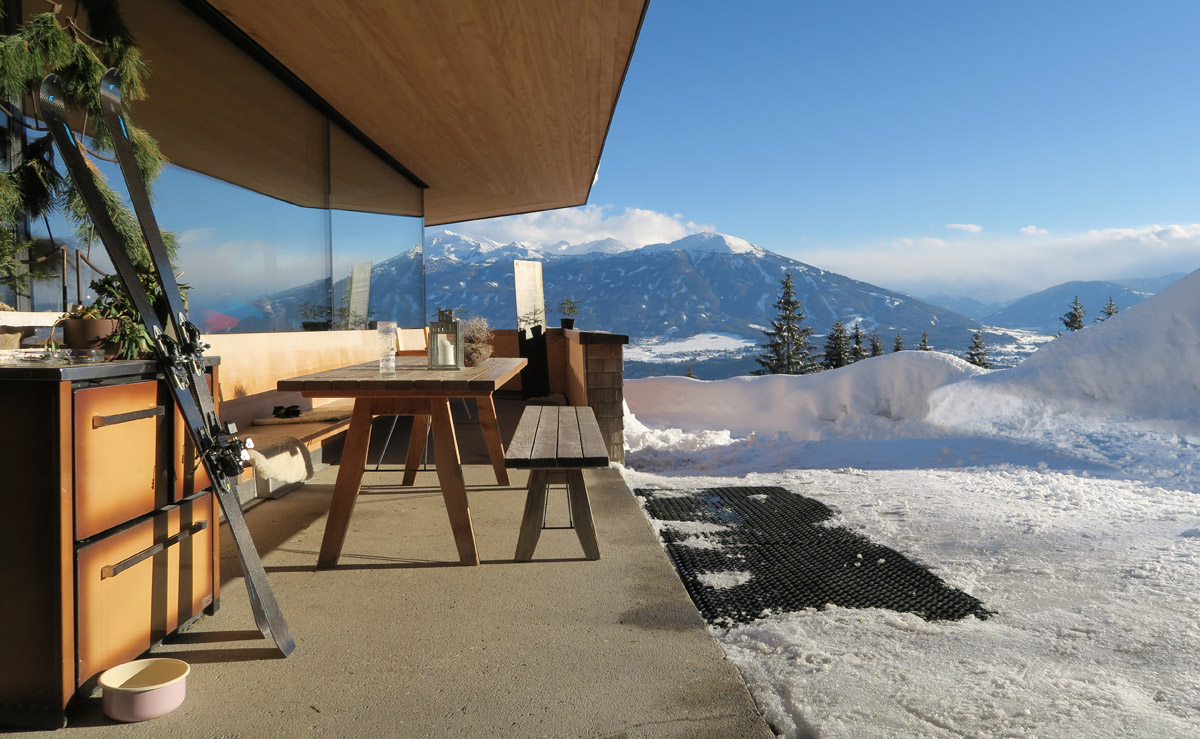 Unlike typically rustic Alms in the Alps, this modern building has wide windows bringing in the panorama view. There is a fireplace in the corner of the restaurant, adding more warmth to the wood-covered interior. 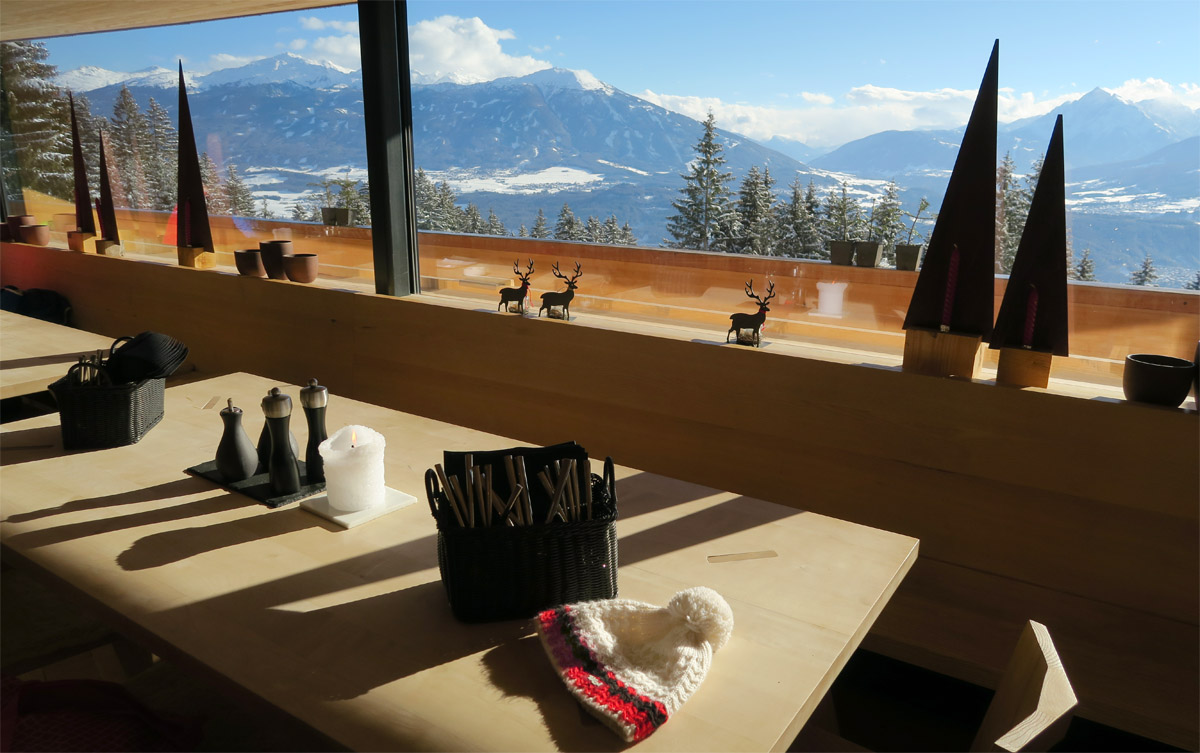 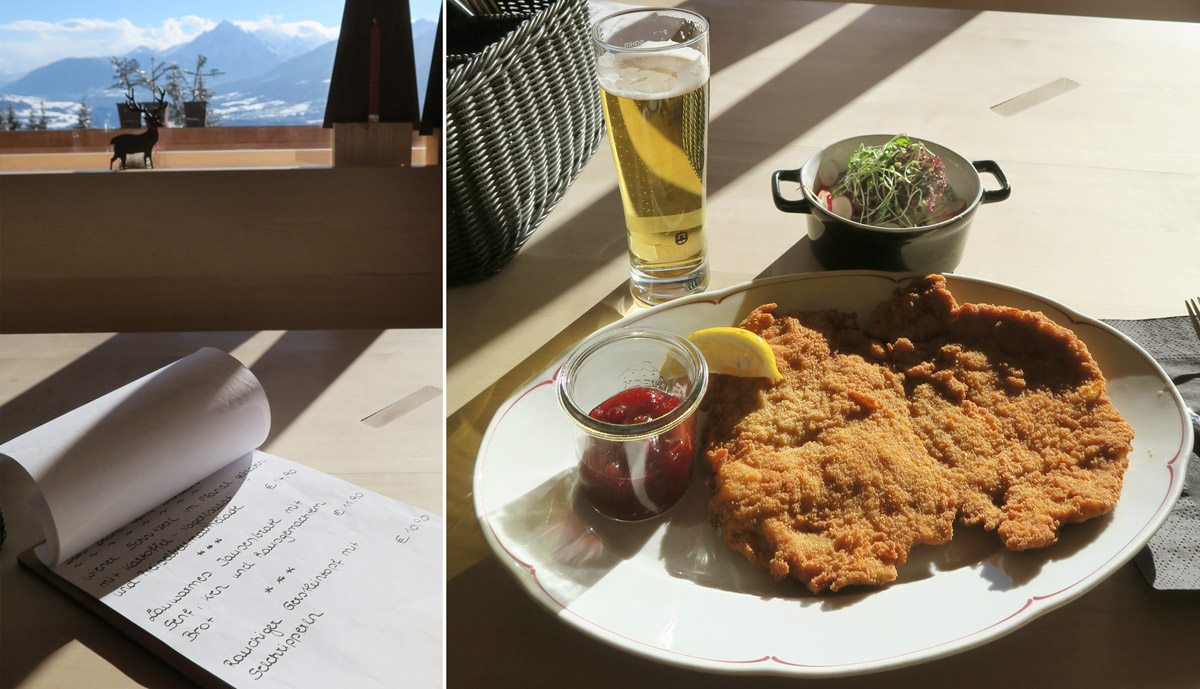 A German menu written in this font definitely took me some time to decipher. I’d already had lunch at home, but I went for the Wiener Schnitzel anyway! © Ichia Wu 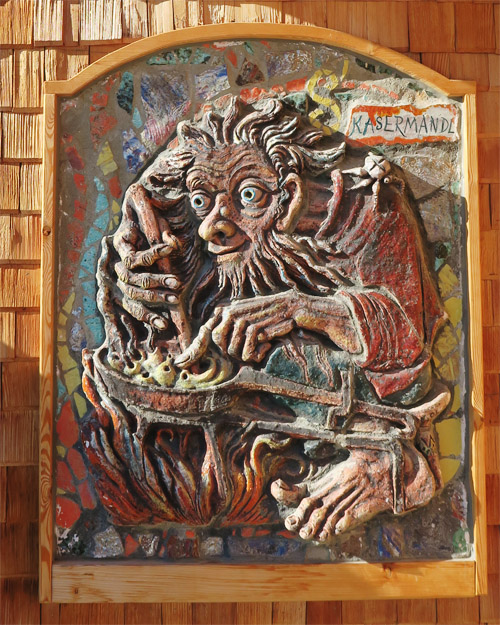 The famous Kasermandl is a legendary occupant of the Umbrüggler Alm. To meet him, you will have to have some luck (and a strong stomach)!

Kasermandl’s story and more folktales of Innsbruck can be found here.

At the far end inside the Umbrüggler Alm, there is an educational showroom, “Naturraum Karwendel“. It is dedicated to the Karwendel Nature Park and its centrepiece is a terrain model. Forty-seven percent of Innsbruck’s city area is within this nature reserve.

However, this time I was told that the showroom was not open as the restaurant was not in full operation. 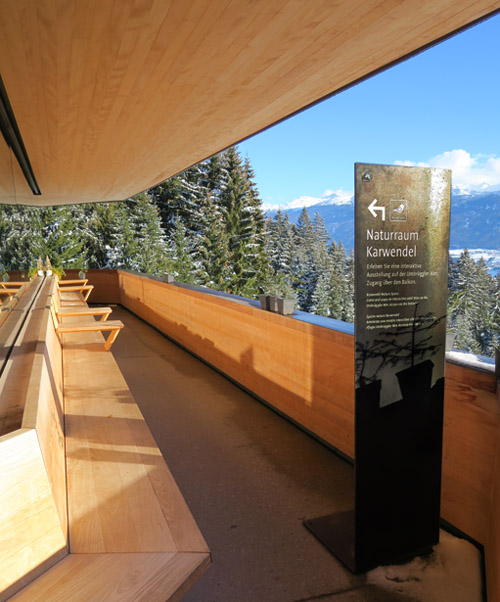 The terrace also leads to the showroom (when the room is open). © Ichia Wu

In front of the Umbrüggler Alm, there is a children’s playground but it was buried in snow. The Alm itself is also a “Pokestop” – you’d know how to make use of it if you play Pokemon Go.

I stayed in the Alm for about an hour. To my surprise, after leaving the Umbrüggler Alm area, on my way down I didn’t encounter a single person. Maybe it was meant for me to savour a peaceful moment of “Waldeinsamkeit” (a word I recently picked up somewhere, which basically means ‘solitude in the forest with a contemplative mood’). I was, however, too overjoyed by the deep white powder I again sank my boots in. 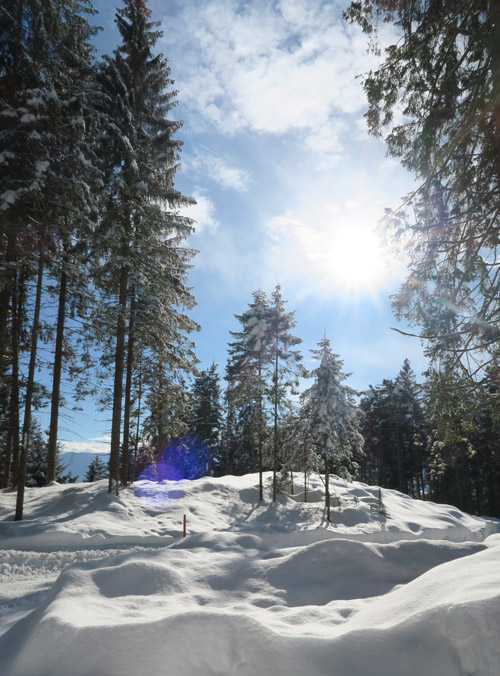 The way down felt too short. © Ichia Wu

Gourmet cuisine in the city, magic on the mountain

A "perfect match" is not only in love, but always when two things come together that complement…

As the saying goes: "it is impossible to imagine the city's calendar of events without them". This…

Two exciting weeks lie behind me. Two weeks in which I was able to experience tears of…