Meet the Locals – Folktales in Innsbruck

As Innsbruck is simply pleasant and beautiful, I often find myself spontaneously taking a stroll. I not only enjoy the occasional hustle and bustle in the city centre, but also tranquil Wilten, the leisurely riverside and history-rich Bergisel.

The neighbourhoods are even more endearing if you are familiar with a few locals. There are some who have lived here for hundreds of years! These characters in local folktales are even VISIBLE – if you know where to look.

Like all other folktales, the following three have several versions. This time, let’s just go with my picks! 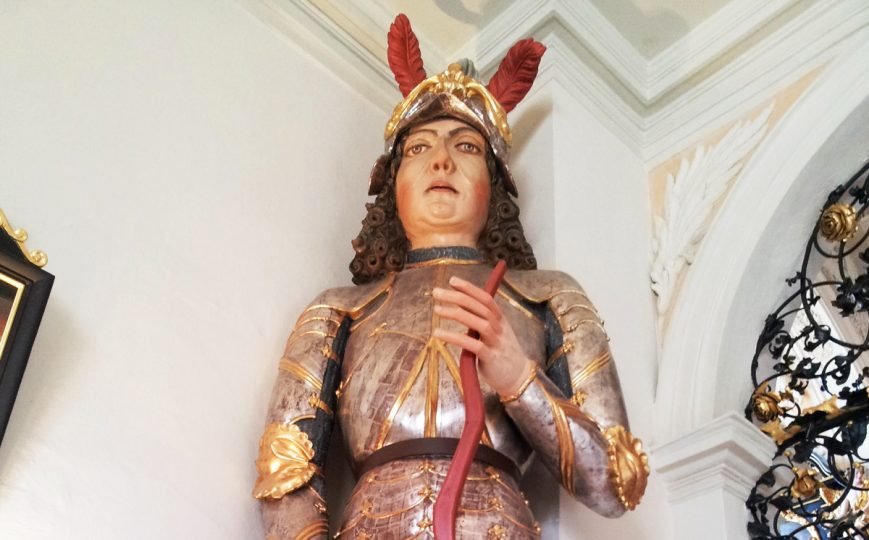 This Haymon statue is rather characteristic.

The story begins with a bloody clash between two giants, Haymon and Thyrsus. Haymon probably came from Bavaria and lived around 600 – 878 AD. After the Tyrolean giant Thyrsus died from the fight with Haymon, Haymon realized that the duel was utterly unnecessary and plain wrong. To atone for his deed, he asked a Bishop to baptize him and even started building a monastery – later known as Stift Wilten. 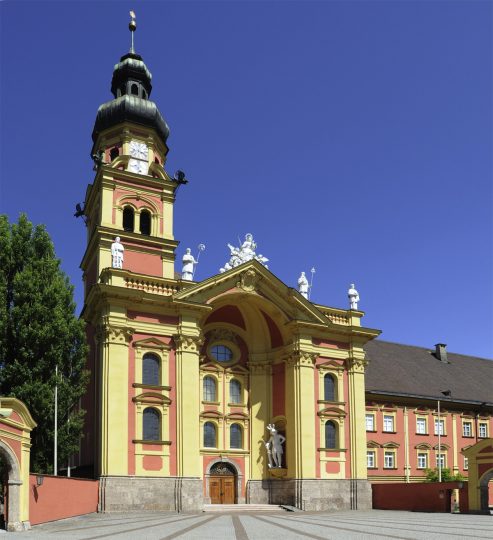 Nikolaus Moll made the statues by the entrance. © TVB Innsbruck / Bernhard Aichner

Sadly, during the construction, a dragon from nearby Bergisel just wouldn’t leave Haymon alone. Therefore, Haymon had to put him to sleep. Then he took a biological specimen from the dragon to show the locals, so that they could have peace of mind, too.

Where to find Riese (Giant) Haymon

It is right next to the Bergisel tram stop. The 18th-century statues of Haymon and Thyrsus look down at you by the entrance, but the real star here is the Haymon behind the door. His massive feet are bigger than German bread loafs.

What’s the red stuff he is holding? You’ve guessed right – the poor dragon’s tongue! This composition also appeared in the old prints from the 17th century. 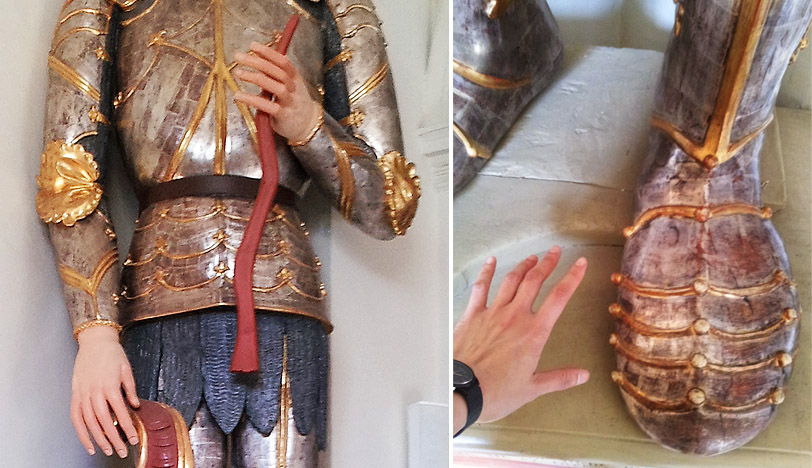 There are handsome portraits of Haymon and Thyrsus on the facade. The building itself is over 300 years old. Furthermore, the guest house sits fittingly at “Haymongasse” (Haymon Alley). It serves delightful Austrian food and has a leafy summer garden. 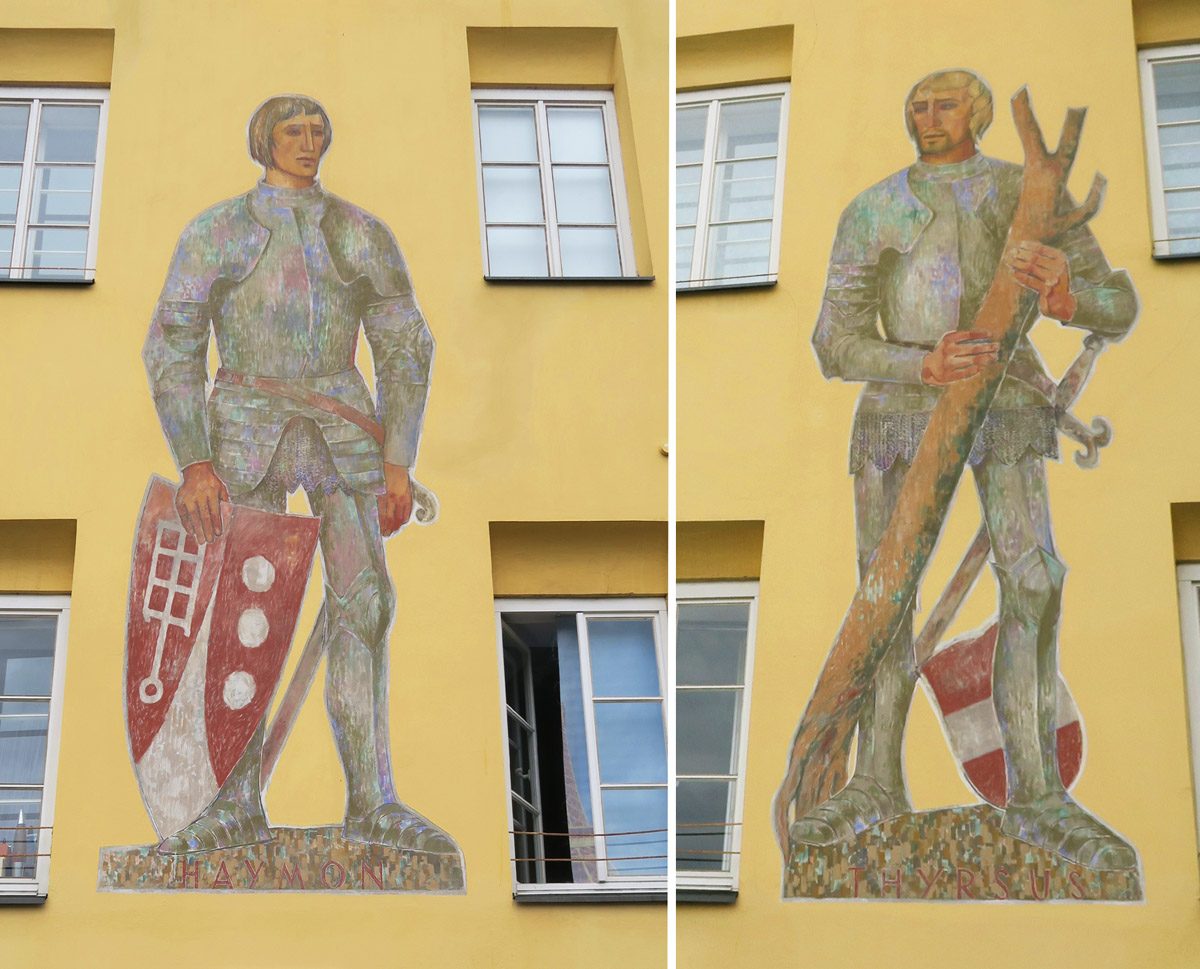 According to the folktales, Thyrsus was actually taller.

The German name of this alley CAN mean “giants” but it actually originates from the Ris family who resided there.

Several giants are installed in this alley as part of the Christmas attractions. These figures make the old town particularly lively.

The dragon could be a metaphor for the river Sill which snakes through the gorge and ravaged the region. To visit the dragon’s lair, you can take the friendly hiking route “Panoramarunde” which encircles Bergisel. In the southeast section, you’ll encounter a protruding observation deck called Drachenfelsen (Dragon Rock). It provides a thrilling view of the steep Sill gorge (Sillschlucht) below.

Alternatively, take the route through the gorge. Our blogger, Danijel Jovanovic, captured its beauty through his lens in this article.

Frau Hitt was a giant queen living in her crystal palace atop the northern mountains. One day, her spoiled son got himself all muddy while playing. As he was so precious to her, Frau Hitt ordered the servants to clean him up with soft bread and milk. This wasteful behaviour apparently triggered some sort of supernatural justice. All of a sudden, a violent thunderstorm came up and the palace ground started crumbling. Meanwhile, Frau Hitt and the son in her arms turned into a pointy rock on top of the mountains.

We now call these mountains “Nordkette”.

Where to find Frau (Dame) Hitt

– such as Maria-Theresien-Straße and Markthalle by the river

The actual pinnacle is very easy to spot on a clear day. You can also appreciate her through a brilliant pair of binoculars (Swarovski Optik) on this guided tour. 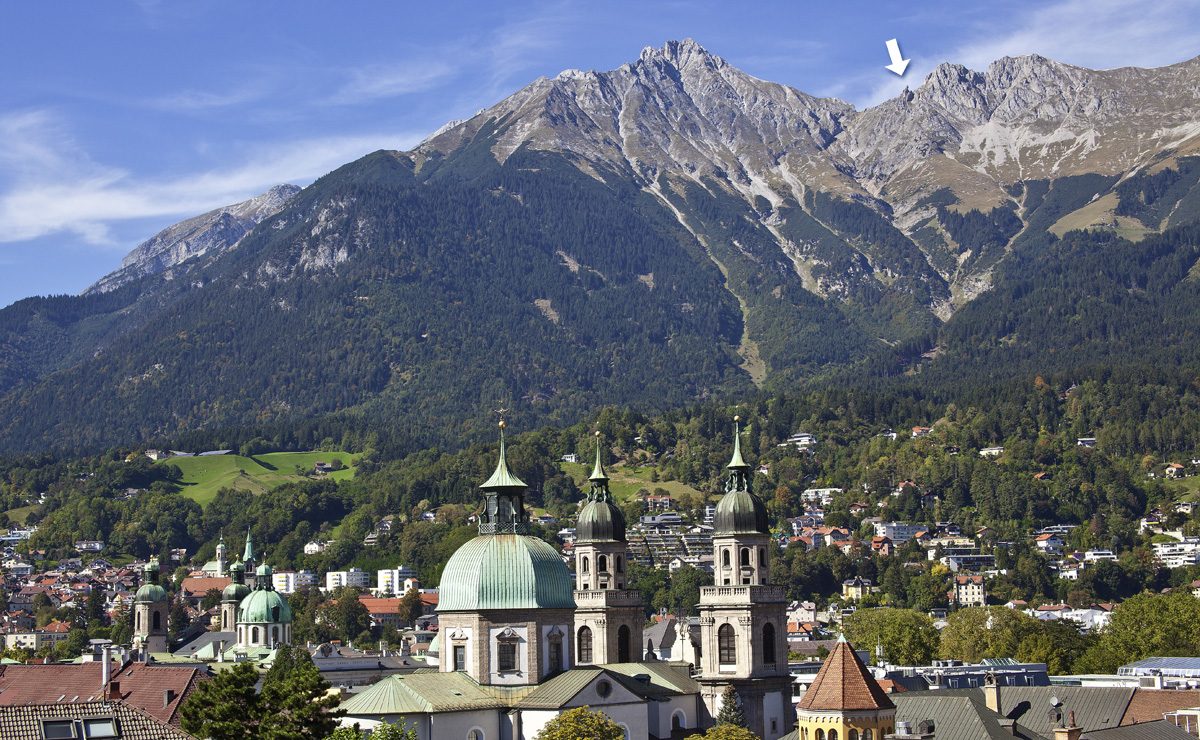 Frau Hitt sits on one of the two bigger saddles of the Nordkette. © TVB Innsbruck / Christof Lackner 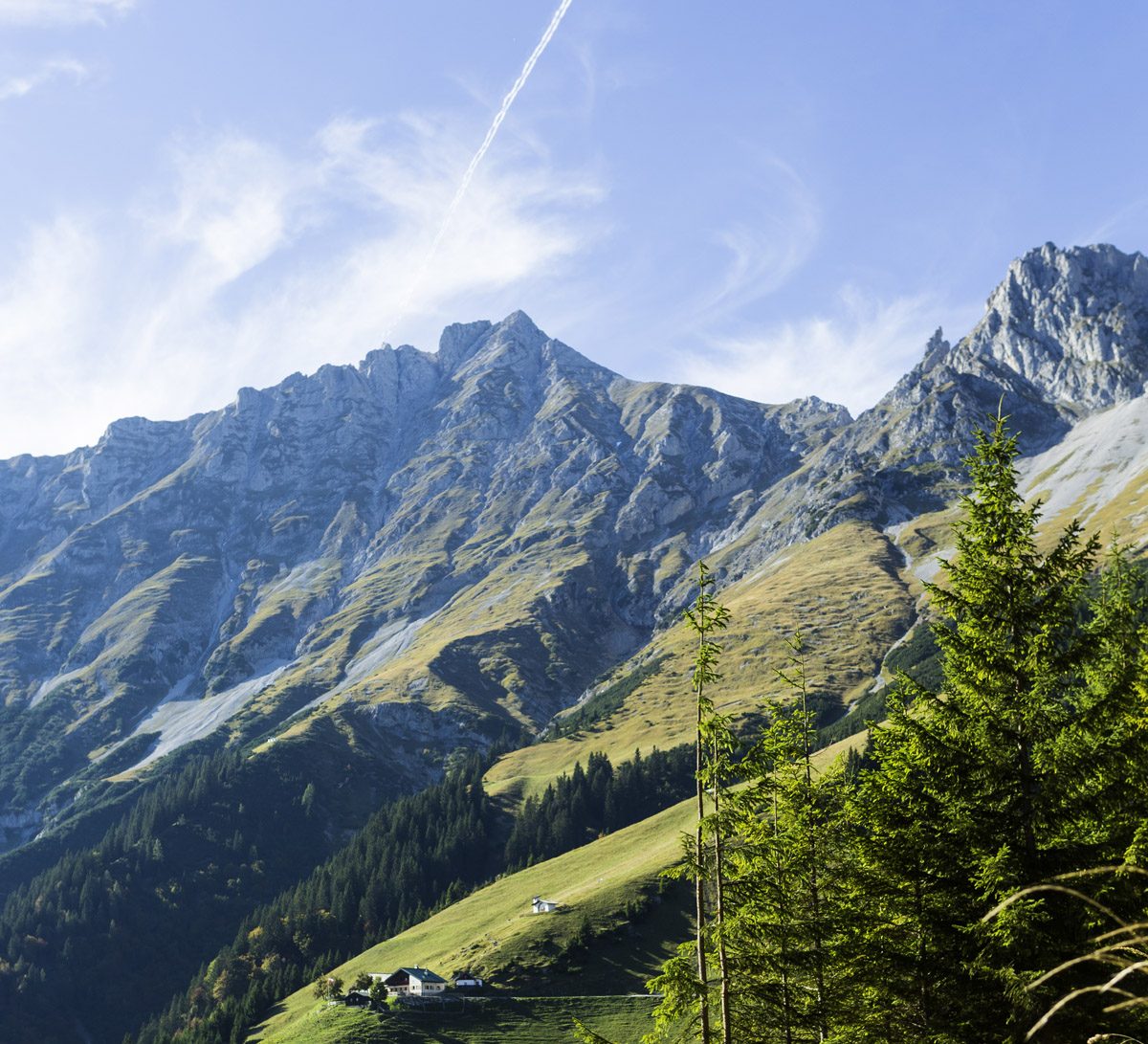 From this trail, you get a view of both Höttinger Alm and Frau Hitt. © TVB Innsbruck / Mario Webhofer

In Hötting, there is also a guest house called Frau Hitt reachable by car. 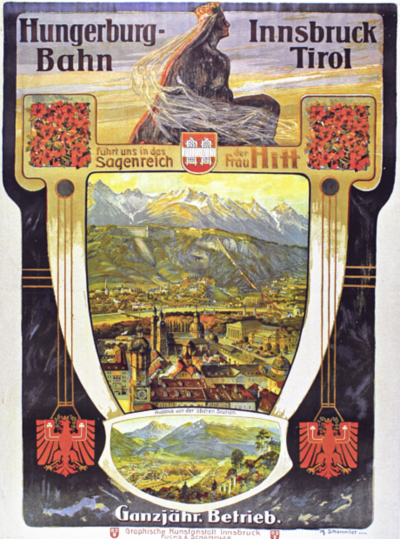 This Art Nouveau / Jugendstil poster is the work of Max Schammler. © Stadtarchiv Innsbruck

There is an original poster in the City Museum in the old town.

This is also exclusive to the Christmas season in the old town. In addition to the giants mentioned above, there are numerous fairy tale characters adorning the buildings. If you look closely, you might find Frau Hitt at two locations. 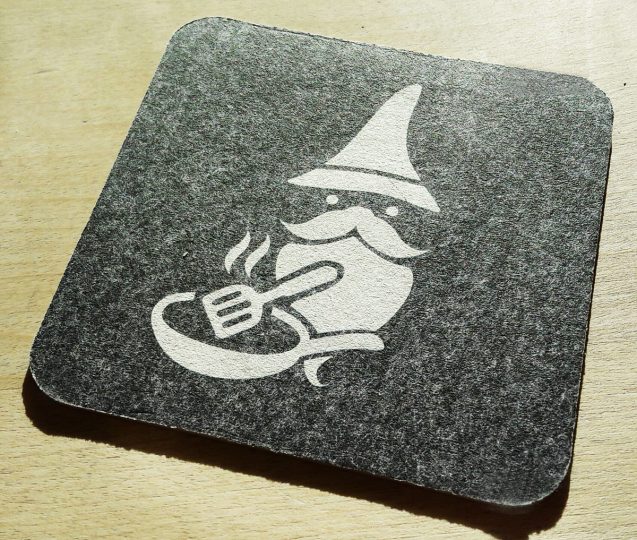 I like the design used on the coasters at Umbrüggler Alm.

Kasermandl reminds me of the Irish fairy “Leprechaun” because they both live in seclusion, have a profession (Leprechaun works with shoes) and enjoy pulling a harmless prank.

Unfortunately, unlike Leprechaun, Kasermandl doesn’t grant us three guaranteed wishes. Instead, he would eagerly offer you a warm bowl of “Mus” – something made of dirt and (probably organic) animal dung! If kind travellers like you are willing to do him a favour and eat up the Mus, he will then be finally freed from his yearly confinement.

Why was Kasermandl burdened with such an impossible task? Well, when he was alive, he worked at a dairy farm by the Umbrüggler Alm in Innsbruck. Due to his severe lack of work ethic and hygiene, after he died, his spirit was confined to desolate Alpine chalets every autumn. If you wander in the mountains during that season, naughty Kasermandl might trick you into his cabin….. 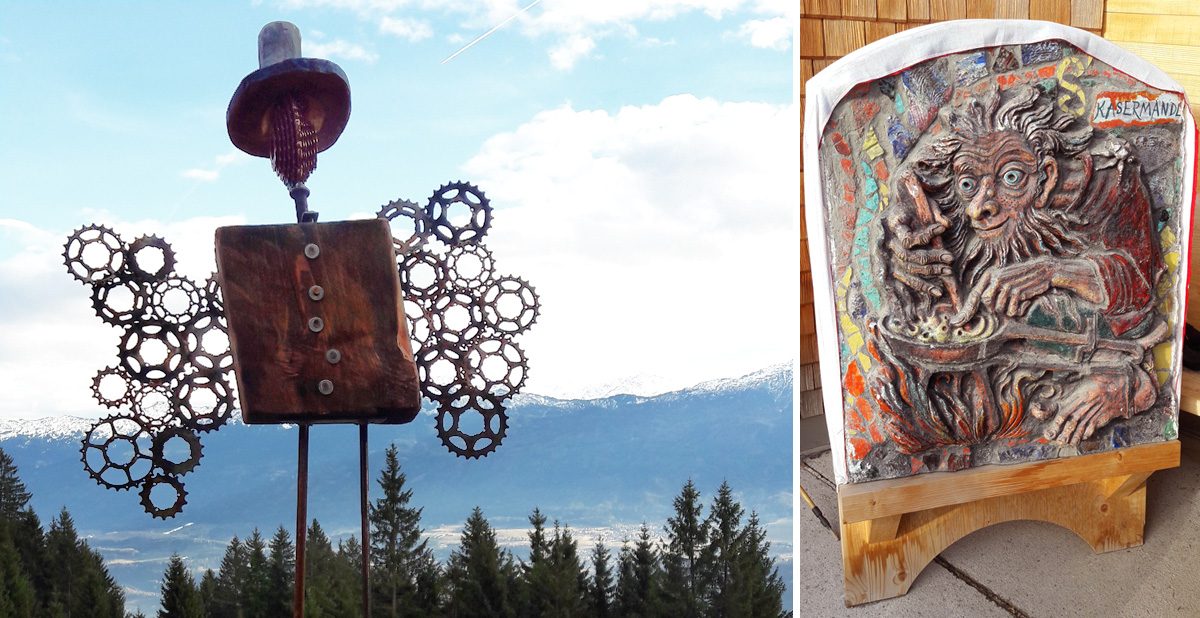 The current Alm was completed in 2015 and this restaurant is quite popular. You’ll find no “Mus” on the menu!

The first stretch of this hiking trail will bring you from Seegrube (860 m) to Umbrüggler Alm (1,123 m). This part is literally straightforward. Continuing further up to Höttinger Alm (1,487 m) is also an option for more experienced hikers, and there is a portrait of Kasermandl on the façade.
In winter, the Umbrüggler Alm is also easily accessible via a snowy route in the woods.

If you prefer a more casual walk which is still within Kasermandl’s turf but at lower altitude, this route through Hötting would be ideal if you start from the eastern end. 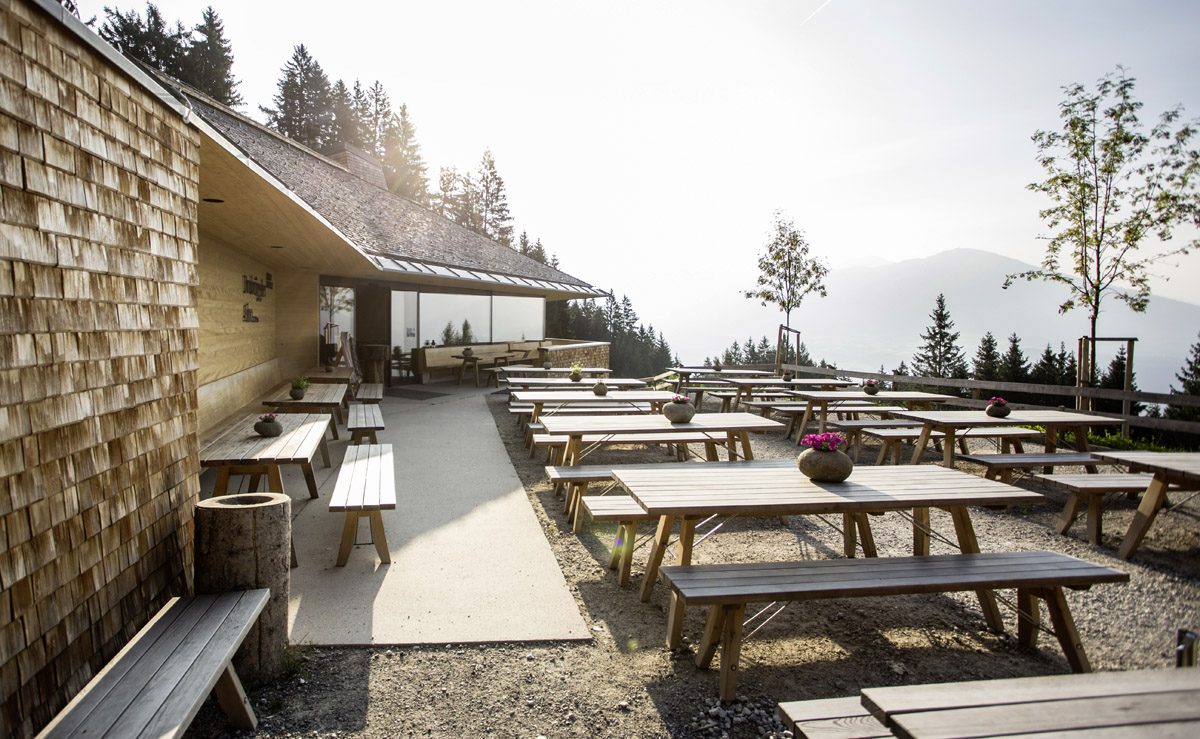 This vintage talisman is on display in the Tirol Panorama Museum with Imperial Infantry Museum. Kasermandl is named as the “Schutzpatron der Nordkette” (Patron saint of the Nordkette) on the badge.

There are many other talismans and badges next to this one. Ullr, an Old Norse god, is a popular character to feature on talismans. He usually stands on skis holding a bow and is regarded as the Patron Saint of Skiers (Schutzpatron der Skifahrer) in Europe.

Enjoy your walk while meeting the locals!

Photo credits (unless individually specified): Ichia Wu
The photograph at the top of this page: TVB Innsbruck / Christof Lackner