Mom visited from Los Angeles for two weeks to check out why I’m relocating here. “It’s like a dream”, she said on her first day and continued to repeat throughout her stay. She reminded me how I felt when I first woke up to the view of Nordkette from my bedroom window and later when I walked round the center of town. We had lots of fun during her visit; mostly eating, shopping and catching up since I hadn’t seen her in close to two years. We grabbed 24-hour Innsbruck Cards and attempted to cram as much fun as possible into one day. We visited Nordkette for a short hike, the AlpenZoo, Swarovski Kristallwelt, rode the Sightseer Bus, and even squeezed in a visit to Schloss Ambras. It’s surprising how much you can get done with the Innsbruck Card in one day! 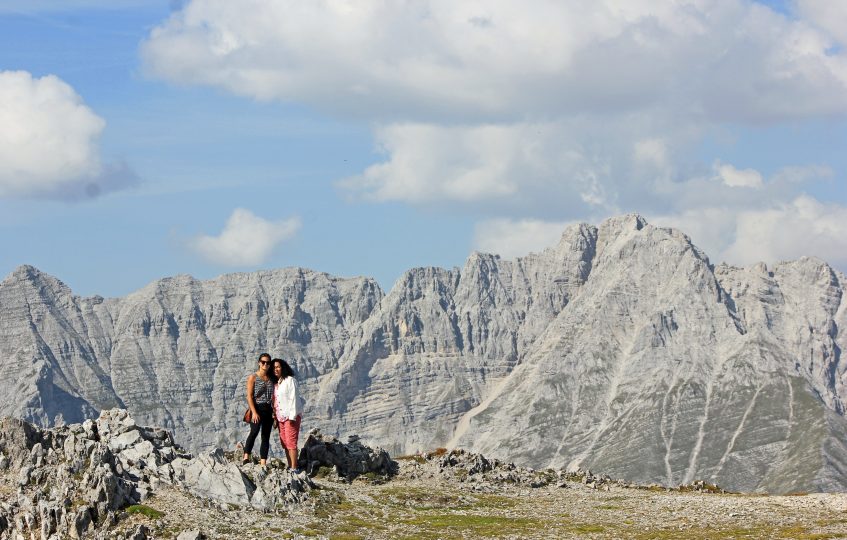 Our Innsbruck Card adventure began with a trip to Nordkette. We started at the Congress station where we admired Zaha Hadid’s architecture before boarding the Nordkettenbahn to Hungerburg Station. The view over Innsbruck was a bit hazy so we didn’t stay there for the obligatory photos at the viewpoint. We continued on out way to Seegrube, took a few photos and boarding the gondola to Hafelekar where our luck would turn for the better.

The view opposite to the city was absolutely stunning. We spent a long time wandering around, staring at the Karwendel Naturpark, limestone mountains and blue skies with traveling clouds. By the time we were done exploring, some of the haze cleared allowing for a better view of the city. 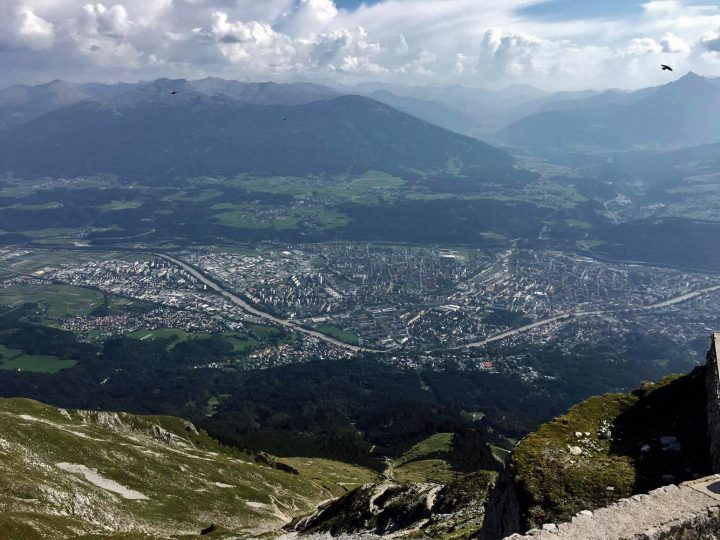 After walking around atop Nordkette, we’d worked up a bit of an appetite and the restaurant there seemed like the perfect place to introduce mom to the Kaspressknödel. We’re big on food so it was no surprise that she really liked it. It was also surprisingly cheap at 3.80 Euros. 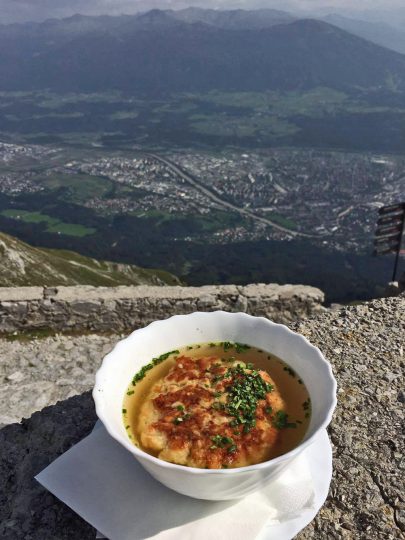 The “Kaspressknödelsuppe” was exactly what we needed to fuel our next stop on our Innsbruck Card Adventure. We headed back down on the lifts and arrived at Alpenzoo. If you haven’t been, be prepared for a hike, of course – you’re in Innsbruck. Mom and I had so much fun at the zoo! 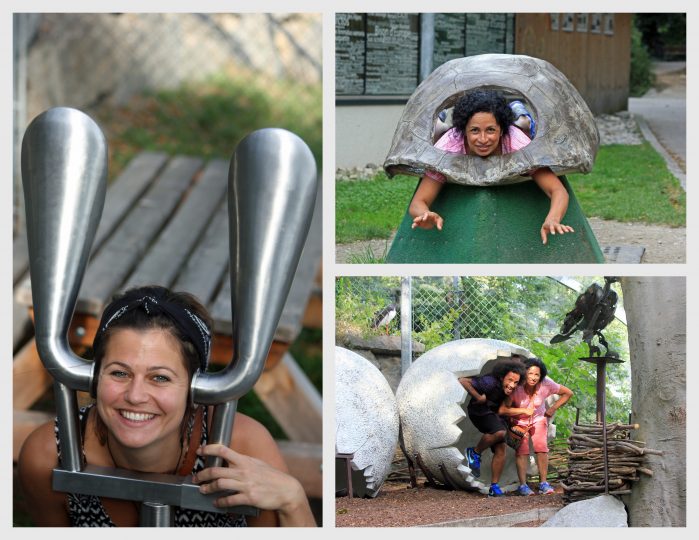 Posing as different creatures from the AlpenZoo

It was just like the good ol’ days when we used to walk the L.A. Zoo; exploring the exhibits while learning about flora and fauna. 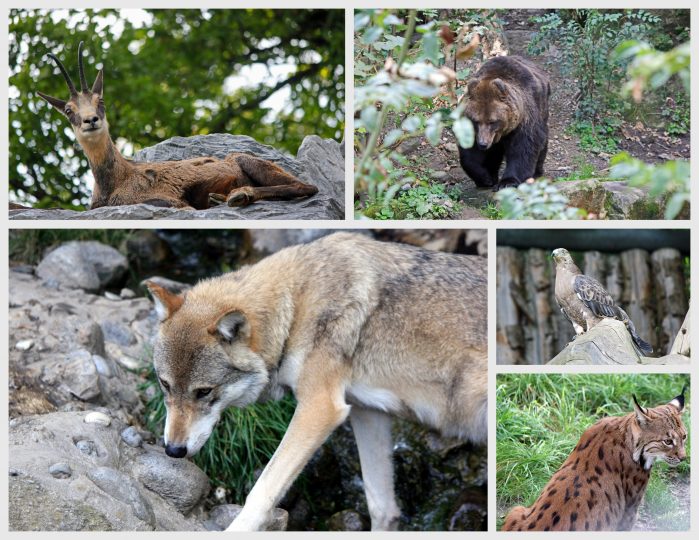 Exploring nearly every exhibit at the zoo wiped us out completely. It was bigger than I anticipated and inhabited more creatures than expected. Definitely a great place to take children, or adults that behave like children. We definitely fit the description, but it wouldn’t be something I would do with most of my friends.

Not knowing what to expect, I was very hesitant to visit this place on my first trip to Innsbruck. I don’t wear a single accessory and I’m not into fashion. I didn’t want to see people making jewelry and I didn’t care much for the history of the company. If I wanted to see a bunch of Swarovski retail items, I could go to any mall in the world for that. But: It turned out to be one of my favorite attractions in Innsbruck! 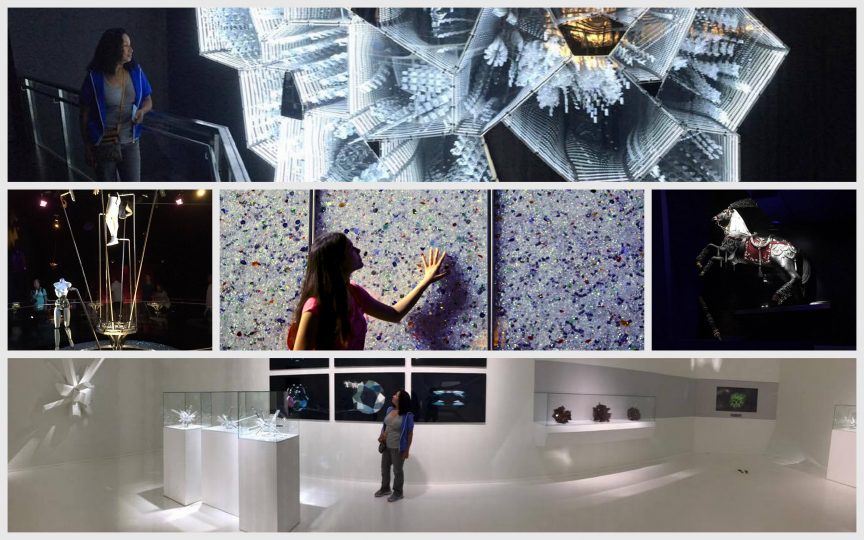 Chambers of Wonder at Swarovski Kristallwelten

I’m not even going to pretend like I understand any of it. Each of the 16 “Chambers of Wonder” is designed by different world-famous artists and they do a pretty good job of clashing with each other while messing with your senses as you move from one chamber to the next. “Mechanical Theater” is by far the creepiest of the exhibits. I’m not sure why, but the robots in there scare me a little bit. One splits up into different panels, while another walks around it. Three sets of legs do the Rockettes kickline and two dinners start to spin under a spotlight. It’s just weird, and I have no idea what it means. Some rooms are really dark, with only the subject illuminated and some are bright white.

The Giant at the entrance of the “Chambers of Wonder”

The outside garden has a multi-level play area for kids, a hedge maze in the shape of a hand, streams and many more art installations to check out. You can also eat at their restaurant or shop at their retail store. It’s not a factory outlet so don’t expect to find amazing deals, but they offer items for every budget.

I still don’t know how to explain it and none of my photos do it any justice. It’s something like a postmodern art museum mixed with a beautiful garden. It’s become one of my favorite places to take friends and family when they visit Innsbruck. The mountains are the obvious first choice, but Swarovski comes in at a close second.

Upon returning to Innsbruck, we decided to squeeze in one more destination and headed to Schloss Ambrass on the Sightseer Bus, both included with the Innsbruck Card. It turned out to be 2 in 1 because the Sightseer Bus is very informational and highlights some of the prettiest parts of Innsbruck. In the 20 minutes we rode it, I learned more about Innsbruck’s history than I had after having spent a year here. It’s definitely a must do while rolling with the Innsbruck Card because it connects nearly every place you’d want to visit anyway. 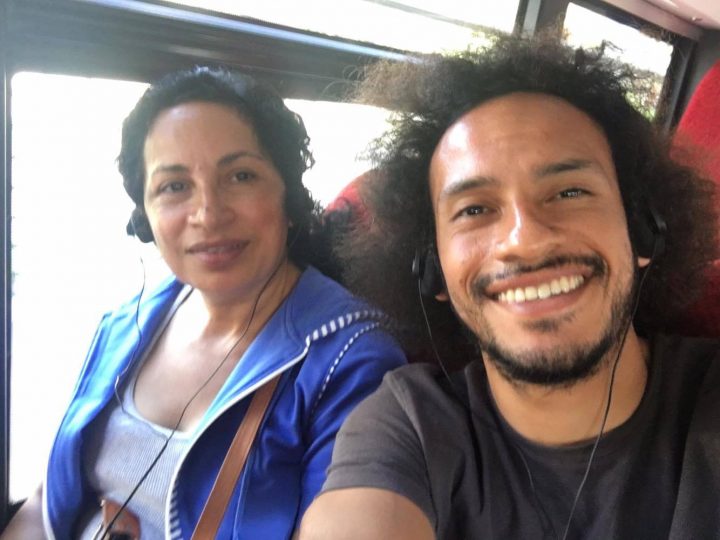 Mom was more keen on visiting this castle than I was. I’m ashamed to say, but I thought Ambras Castle would be boring and display some of the stuff I’d already seen at other museums. Again, I was wrong – really wrong. We got the audio guide and were thoroughly pleased with all the insight that was offered on the collections. My favorite had to be the glass collection, which taught me lots about how different types of glass are made. We also enjoyed the “Chamber of Art and Curiosities”. We didn’t get to explore the entire castle because we were getting really tired and needed a break. I’ll attempt to see the rest when my next friends come for a visit.

Do yourself a favor and get the card. It includes all the top attractions and it really saves you lots of money. We would have paid 94.50 Euros each if we had done all these attractions without the Innsbruck card. Our total savings amounted to a whopping 55.50 Euros that we were very happy to put towards eating out and souvenirs! The savings are great, but the biggest advantage is that it makes you get out there and do as much as possible within the time range you bought your card for. It’s safe to say that next time I have friends visit, we’ll go for the 48 or 72 hour cards because there is still so much we could have done!

The card is available online, the Information Center, and various other spots throughout town and surrounding villages.

All photos taken by Carlos Melgar