Welcome to the 6th episode of Epic Innsbruck! This time we go gliding through the colours of autumn, and soar like an eagle over Mieming, Innsbruck City, Nordkette, and the Karwendel mountains.

I linked up with Lewi (Markus Lewandowski) who was one of the pilots of Extra G who featured in the very first Epic Innsbruck episode (Aerobatics), but this time we went flying – or rather soaring! – with his company Mountain Soaring, who offer gliding adventures directly from Innsbruck Airport. 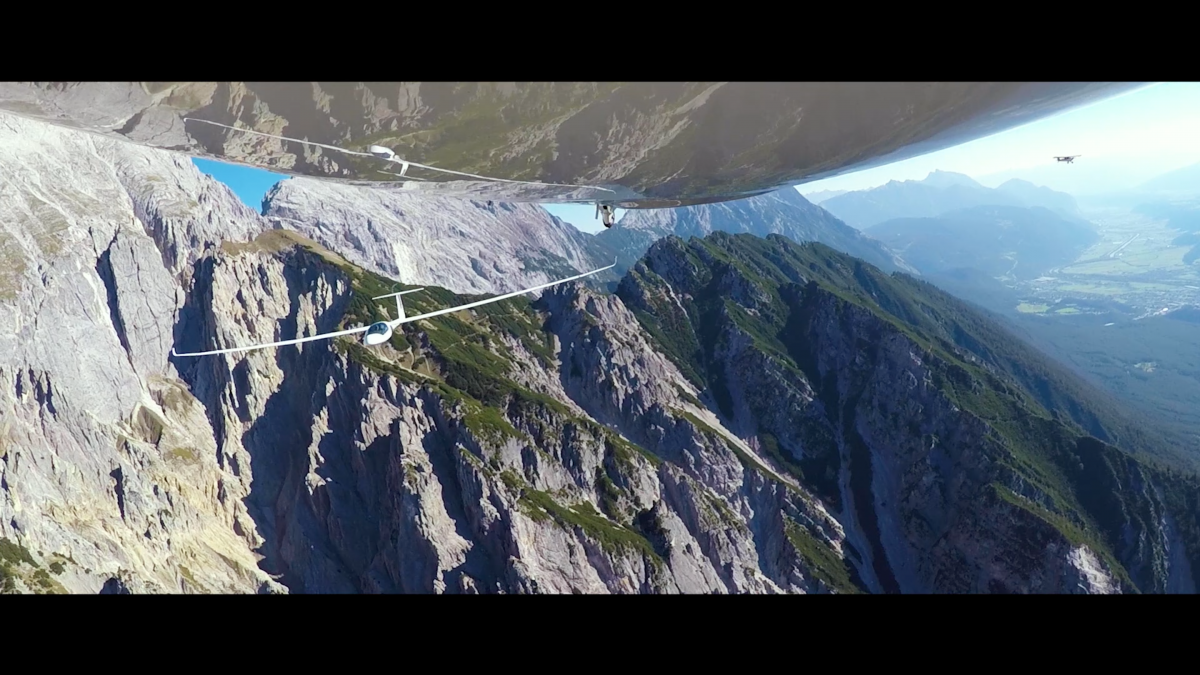 If you don’t know what gliding is, it’s basically unpowered flight in a small aircraft, using naturally occurring currents of rising air in the atmosphere to remain airborne. Sometimes called soaring, it’s definitely one of the most amazing ways to see and experience the mountains!

Strap yourself in and get ready for some epicness!

We started with Pilots Dominik Senner and Aurel Hallbrucker flying the gliders in formation towards Mieming. Myself and Lewi followed in a two seater plane where I could poke my camera out of the window to capture some breathtaking shots from different angles. 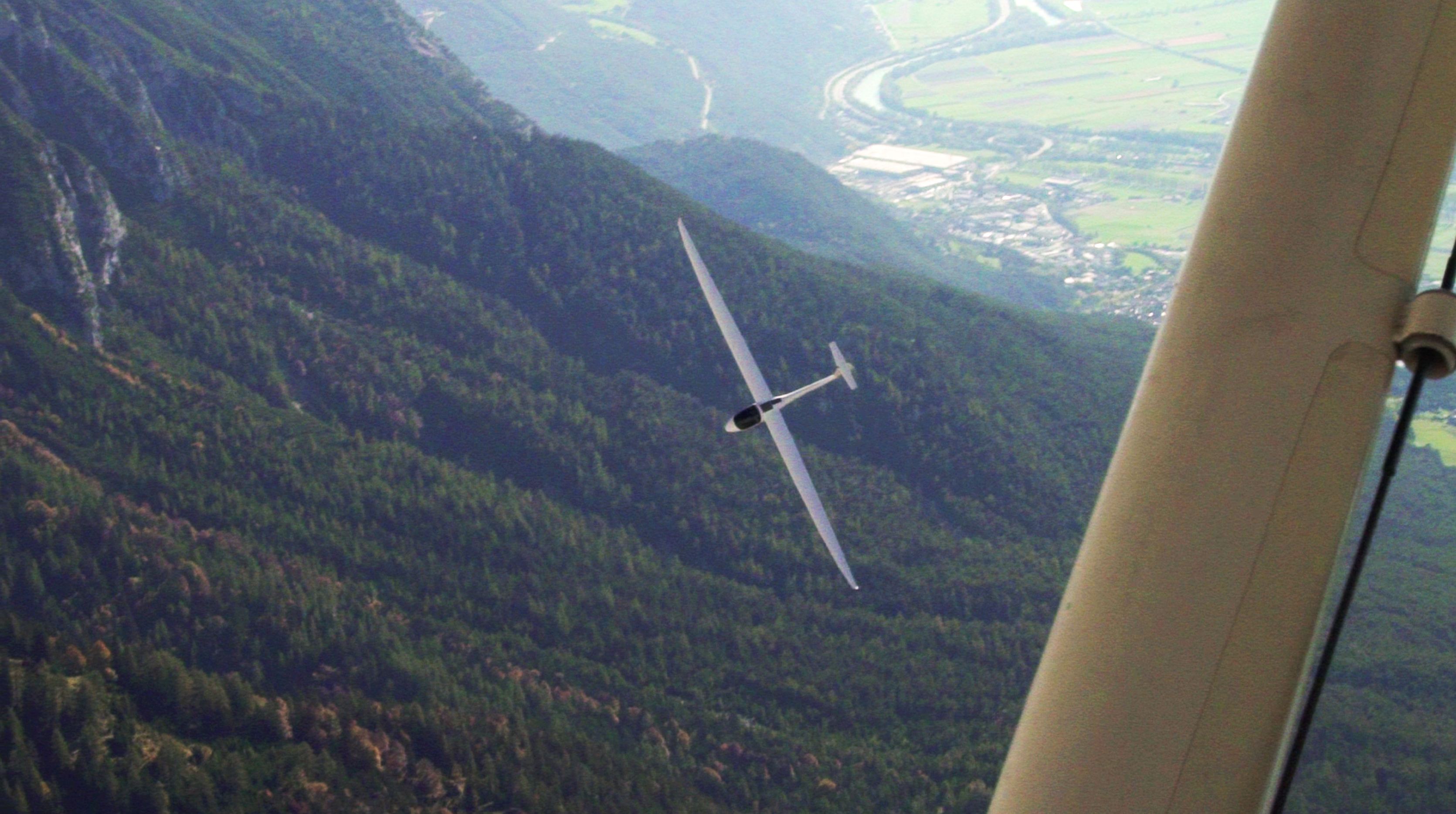 Capturing a break off out of the camera ship window.

We flew right next to the mountain rock face, and the guys performed some low-key but still epic aerobatics – hitting g-force 2 and 3, and speeds of up to 220kph. EPIC! 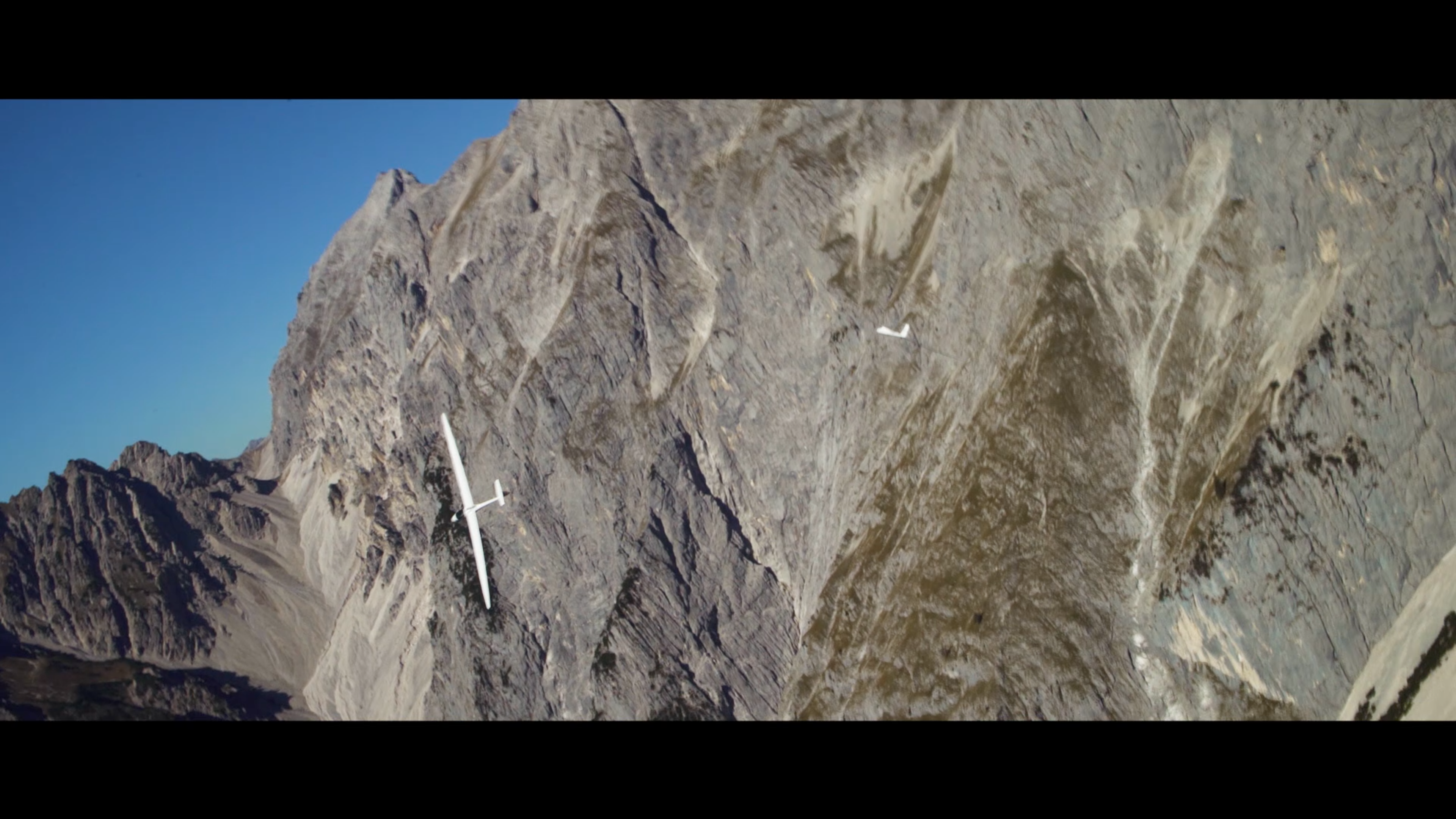 Another break off at Mieming.

Gliding over Nordkette and the Karwendel Mountains

After landing back at the airport, Lewi and myself went up the Nordkette lift to Hafelekar. With radio contact to the Innsbruck Airport Tower and the two gliders, Dominik and Aurel took flight again.

Sitting on the edge of the Hafelekar lift station overlooking the Seegrube midstation, the gliders came soaring up from below before shooting up vertically – creating a fantastic show for onlookers who not only enjoyed the views but also the impressive sounds as the gliders flew elegantly past and up towards the sun. 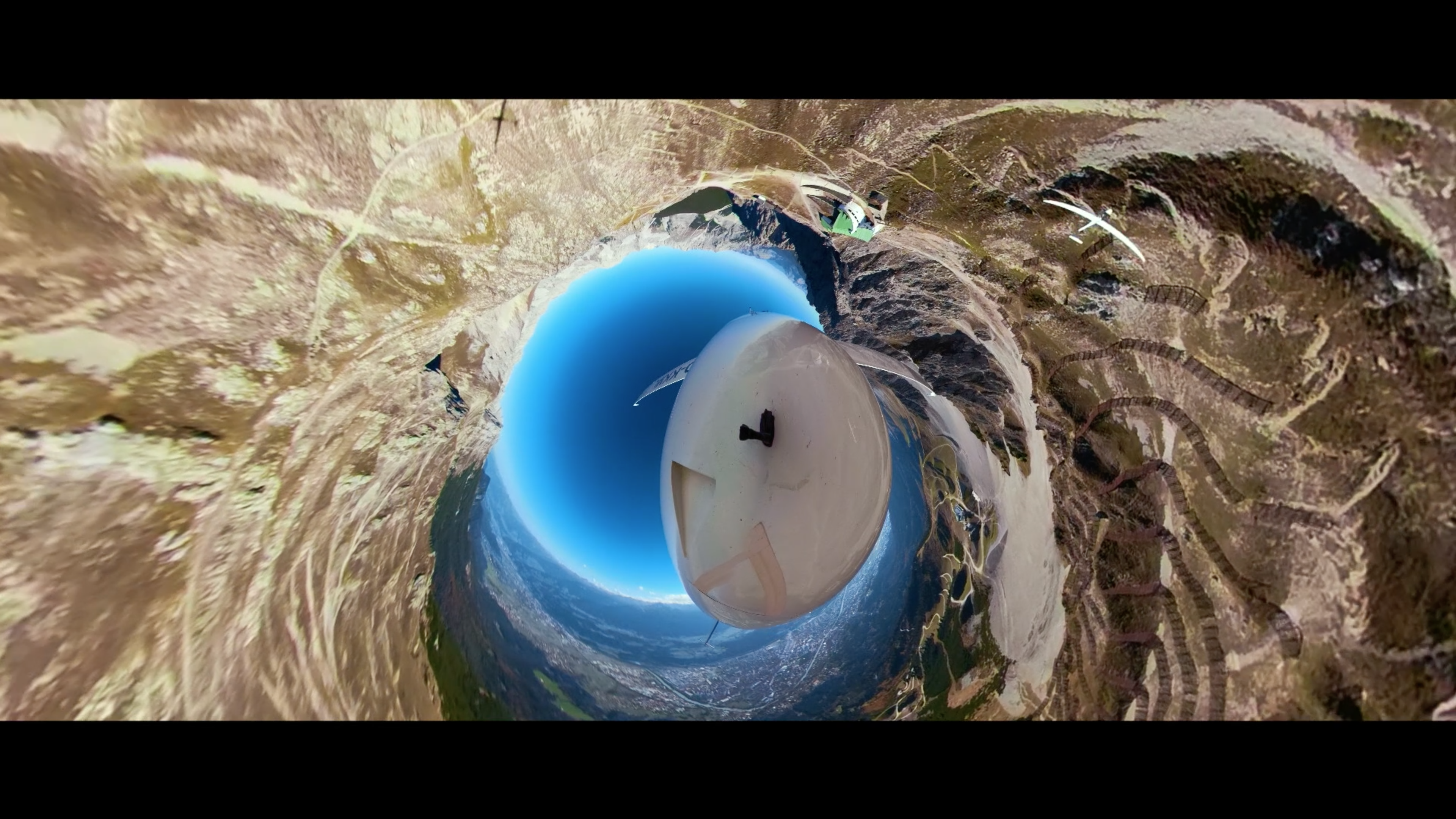 We then moved down to Seegrube, where people tucking into the delicious dishes served by the mountain restaurant watched in awe as the eagle-like flying machines swooped overhead. Moving up to the top of the Frau Hitt Warte chairlift, we were joined by more avaition fans, who whooped and waved to Dominik and Aurel up in the sky. 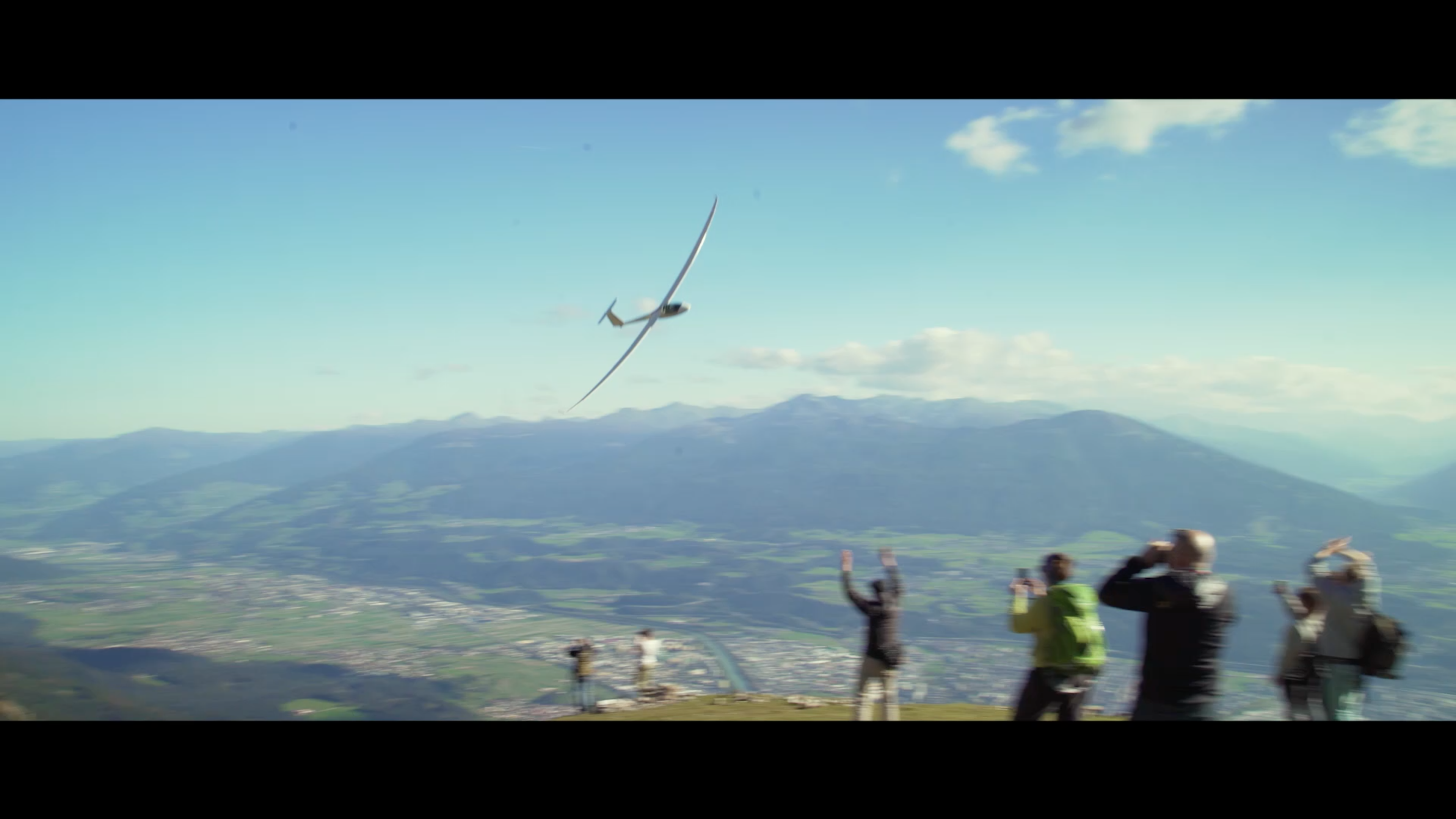 Permissions to film with a drone in Innsbruck

One of my favourite shots is where the drone catches the glider flying towards Innsbruck. Although my favourite shot, it was the most difficult to capture. Not necessarily because of the technicality of the shot, but rather the permissions required.

Flying drones in Innsbruck is restricted. Not only do you need permission from Austro Control (the main aviation authority in Austria), but extra permission is also required from the airport tower, even if you’re flying on top of the mountain and well away from built-up areas. 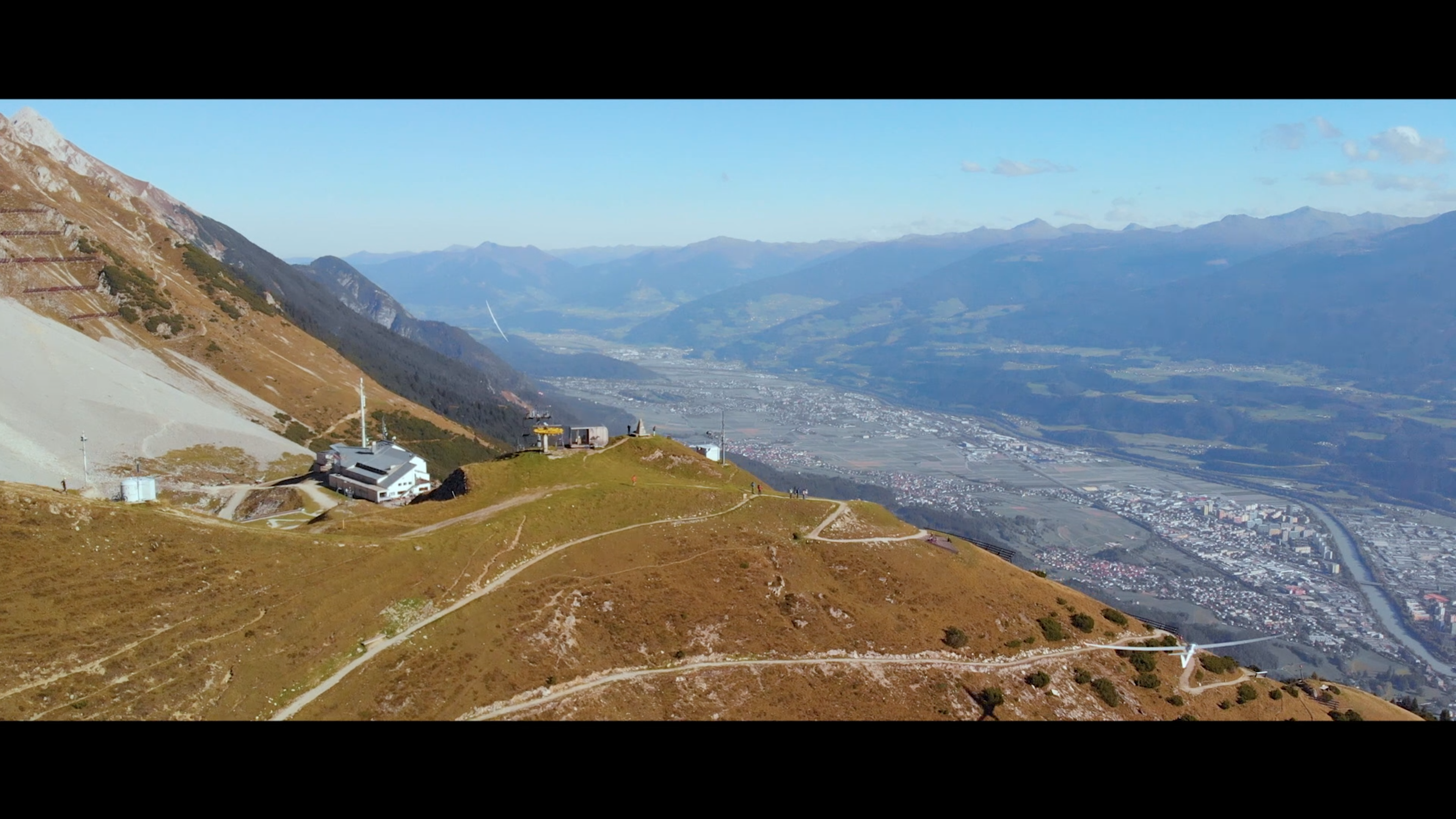 Also, when drone flying on Nordkette, as well as the above permissions, you ALSO need ANOTHER permission from the Innsbrucker Nordkettenbahnen lift company itself. And even with this, you must still fly at least 200m away from the operating lift, stations and the cables.

Finally once we had everything set up properly, we needed to make sure we had constant radio contact with both gliders pilots and the airport tower.

Please don’t even think about flying or filming with a drone on Nordkette or around the city without these permissions, as due to the proximity of the airport and the flight paths of regularly incoming/outgoing planes, you could be responsible for a serious accident and/or be landed with a significant fine!

Innsbruck is a glider’s paradise, with the fantastic lift provided by the mountains, especially when the Föhn wind picks up. In fact it’s even possible to glide – without power! – from Switzerland to Vienna and back. Talk about eco-friendly transport!

I met Toni Prieler (aka Charlie One) after our shoot, when we sat and had a beer with the Innsbruck Gliding Club (ISV -Innsbrucker Segelflieger Vereinigung). Toni is 84 years old and has been gliding since 1960. With 8500 flying hours under his belt, he truly lives for flying. What a legend! 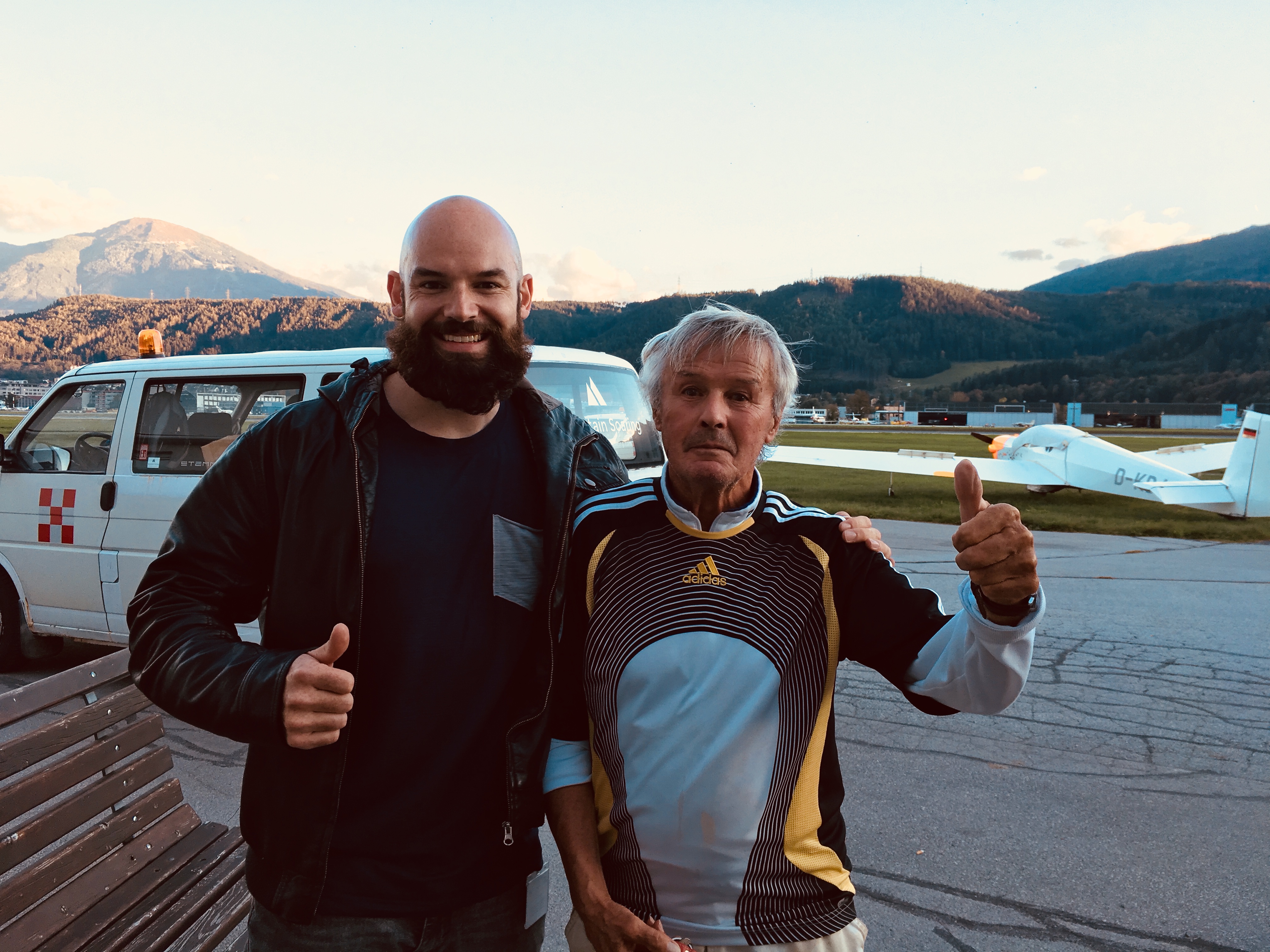 Gliding in Autumn is probably the best time to see Innsbruck from the air. The golden light on a beautiful sunny day is just perfect, and the multi-coloured trees are jaw-dropping, even after years of looking at this mountain from many different angles whilst flying, biking, snowboarding, hiking etc. 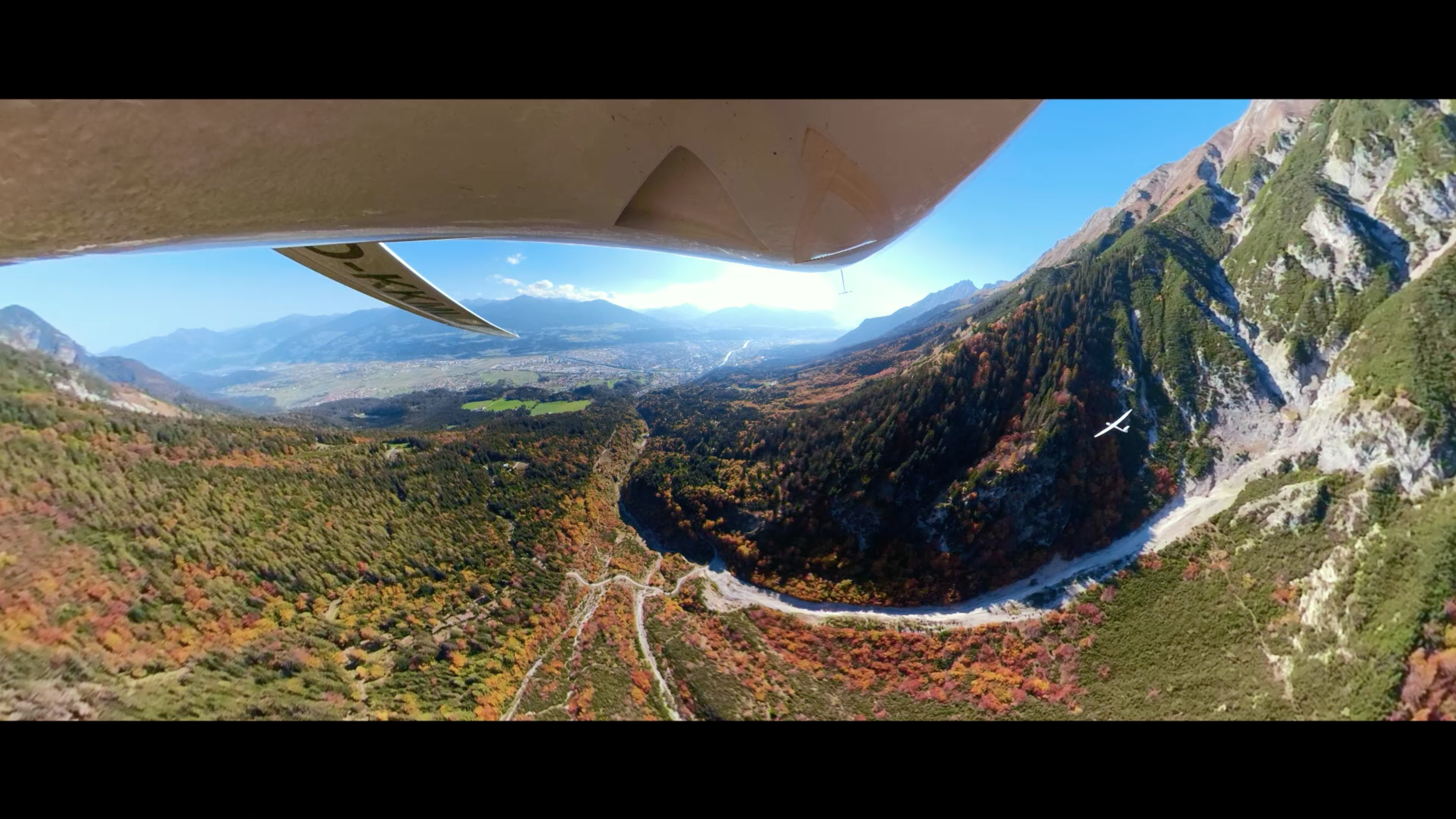 Innsbruck is a Playground with Endless Opportunities

The mountains give a different perspective every time I look at them, and making this episode has given me even more inspiration than ever before. I’m even thinking of becoming a glider pilot 😉

The endless opportunities of what can be done in this small but mighty city amazes me at every stage of this Epic Innsbruck project. I love meeting the different people of Innsbruck and showing the region’s areas through the craft of their favourite activities.

On a recent Instagram post, I said that Innsbruck just keeps on giving unforgettable experiences that bring me and many others a lot of happiness, and it’s just so true.

Keep your eyes peeled for Epic Innsbruck 18-07, and if you want to go gliding over Innsbruck and surrounding area, contact the guys at Mountain Soaring! 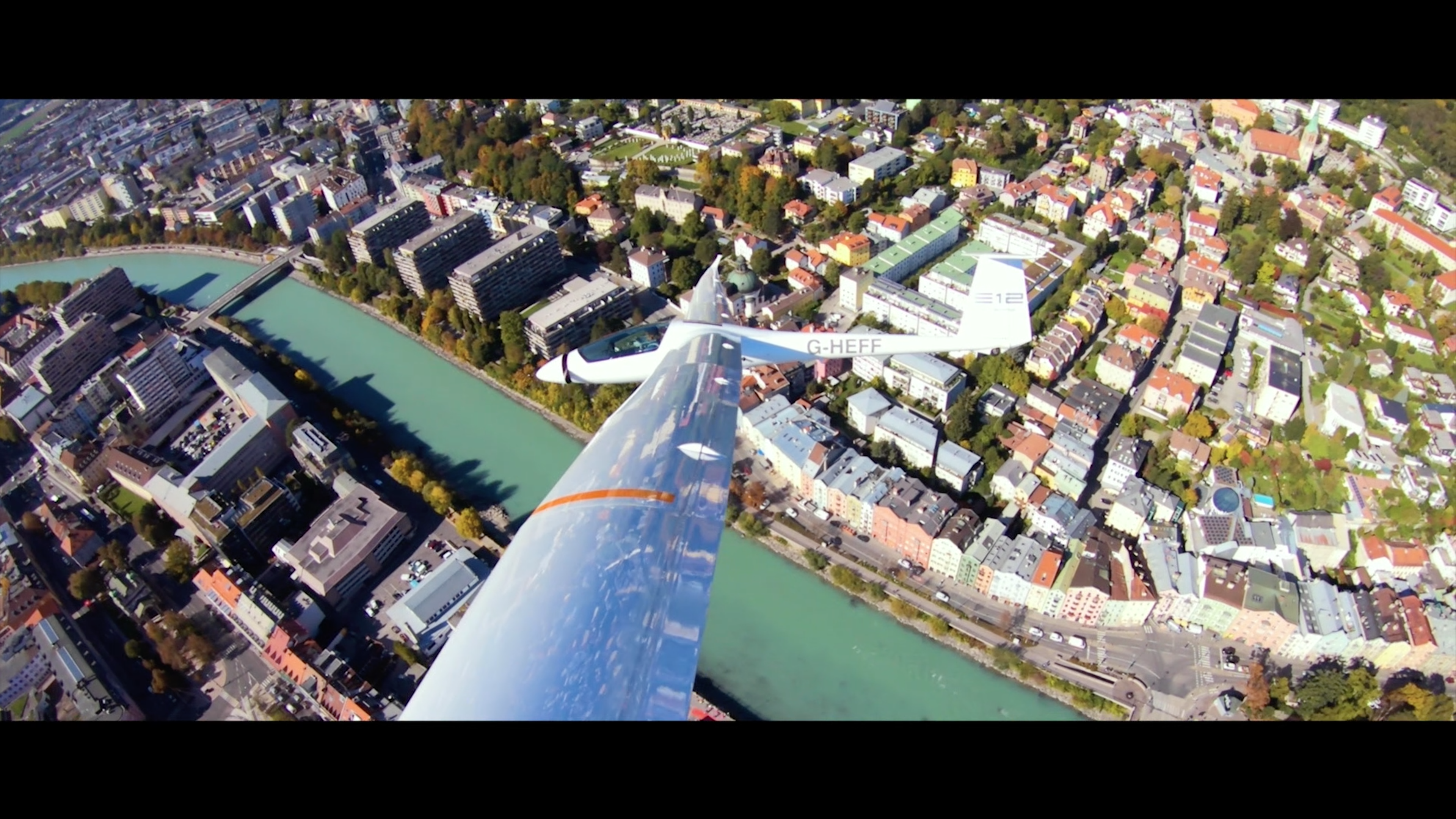 Soaring over the houses of Mariahilf = epic!