A Walking Tour Of Innsbruck… And Its Fountains!

Any good walking tour of Innsbruck should start in the old town. Once you’ve taken the obligatory selfies with the Golden Roof, walk down the main street towards Maria-Theresien-Strasse. There on the right you’ll see the cute little Trautson Fountain. It was built in 1806 and is the only fountain in the old town still in its original location. 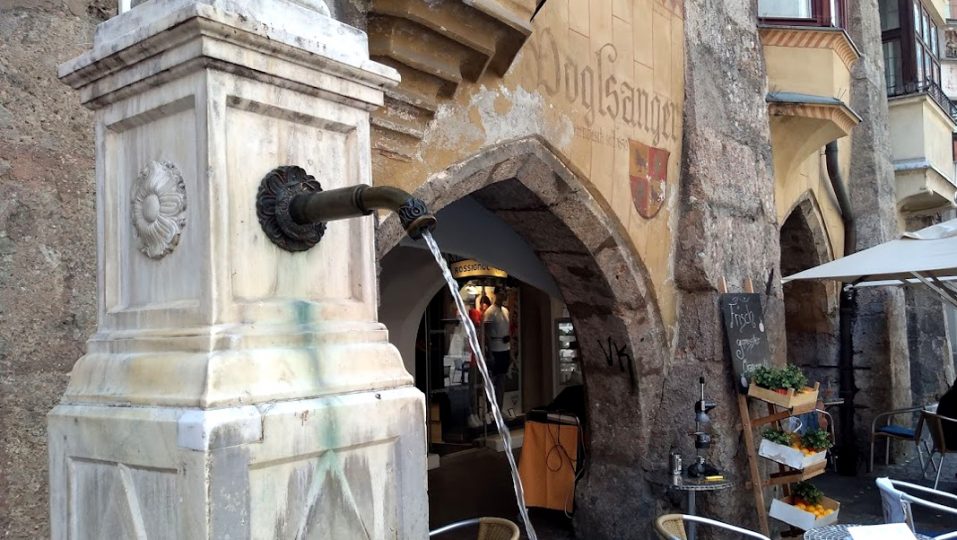 Yes, that is drinking water and yes, you may fill up your bottle. ©Fiona Park

Want to stop here? Grab a coffee in Café Katzung, watch the street entertainers, or climb the City Tower for magnificent views over Innsbruck.

Go back to the Golden Roof and turn right. Follow the narrow little street all the way down and through the arch at the end, then turn left. On the other side of the road you will find a most magnificent fountain. This is the Leopold Fountain, which was built for the famous Emperor Leopold way back in 1622 (he’s the one riding his horse on top of the fountain). 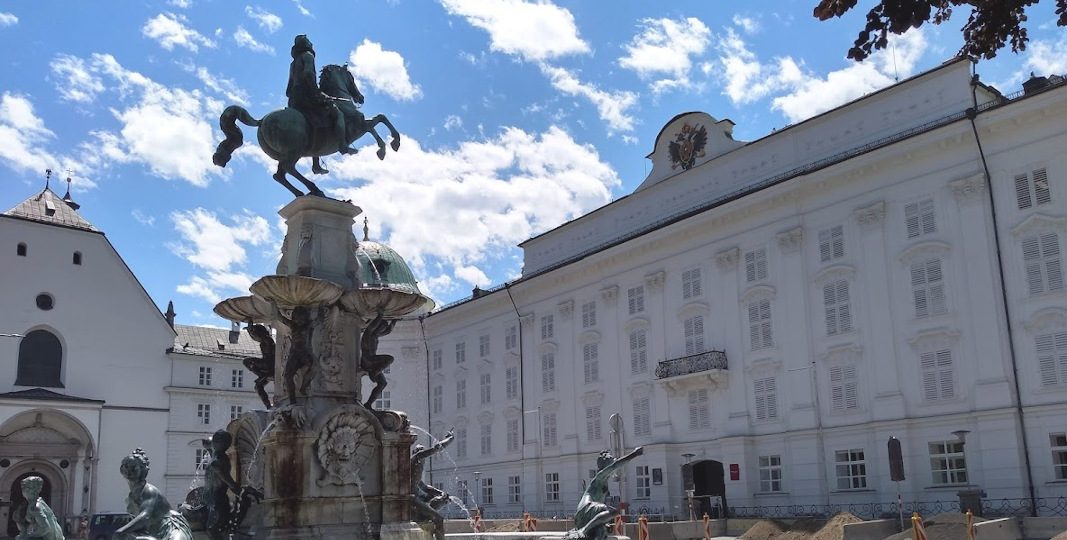 The modern building behind the fountain is the brand new Haus der Musik concert hall. In Leopold’s time this was the court theatre. Now it’s a modern music venue, hosting concerts of every musical genre you can think of. 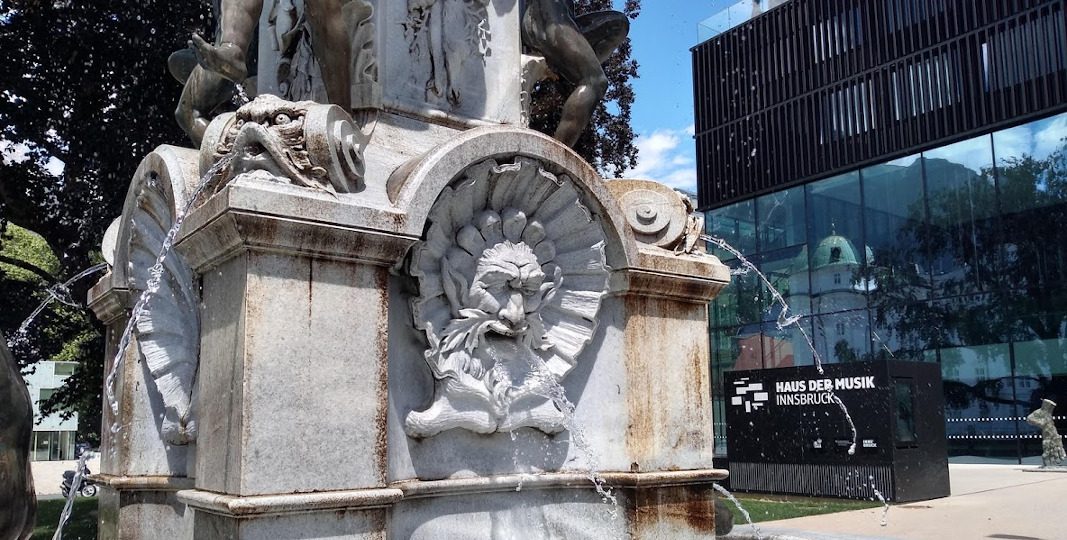 Want to stop here? Dine at the Das Brahms restaurant in the Haus der Musik, or cross the road and visit Leopold’s old palace, the Hofburg.

Walk down Universitätsstrasse until you come to the stunning Jesuit church. Take an optional look inside, then go through the little wooden door to the right of the church. Keep walking straight with the buildings on your left and you will come to the first of two pretty fountains, one each side of the Ferdinandeum museum. 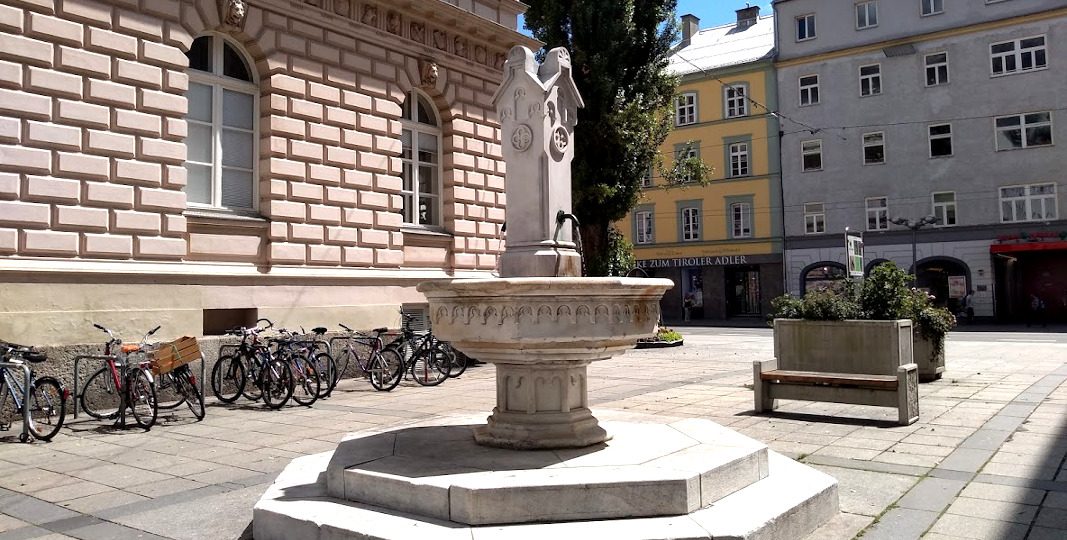 The museum was built in 1823 but the fountains weren’t added until around 1875. No amount of Google searching can reveal the reason for this.

Want to stop here? The Kunstpause café, by the twin fountain on the other side of the Ferdinandeum, has a great lunch menu. And be sure to pop into the museum too!

With the Ferdinandeum behind you, walk straight down Wilhelm-Greil-Strasse until you come to a small but beautifully planted square. In the middle you’ll see the awesome Rudolf Fountain. 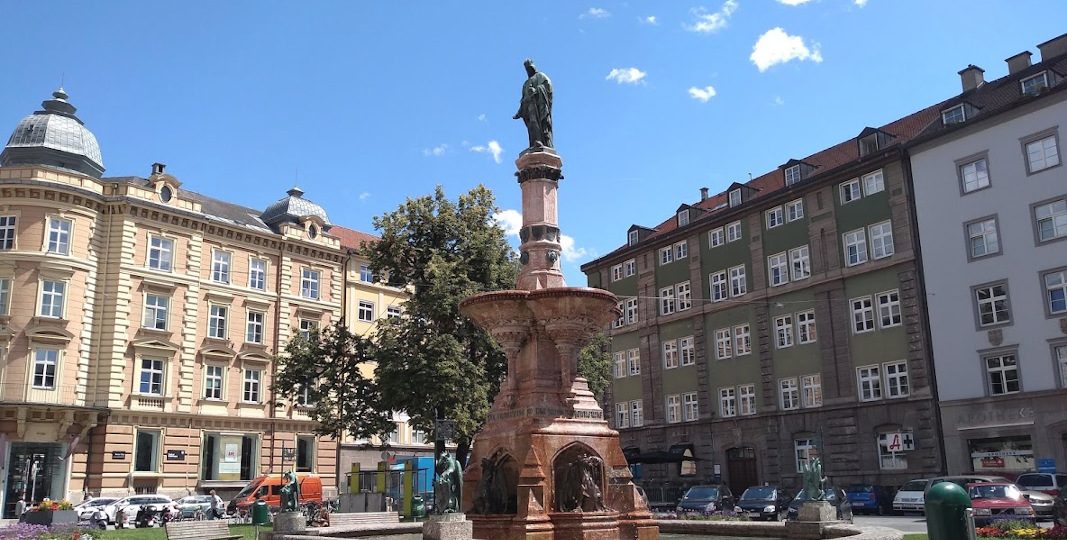 Now that’s what I call a fountain. ©Fiona Park

The Rudolf Fountain is awesome for two reasons. Number one, it commemorates 500 years of Tirol being part of Austria (always worth celebrating). Number two, it has dragons! 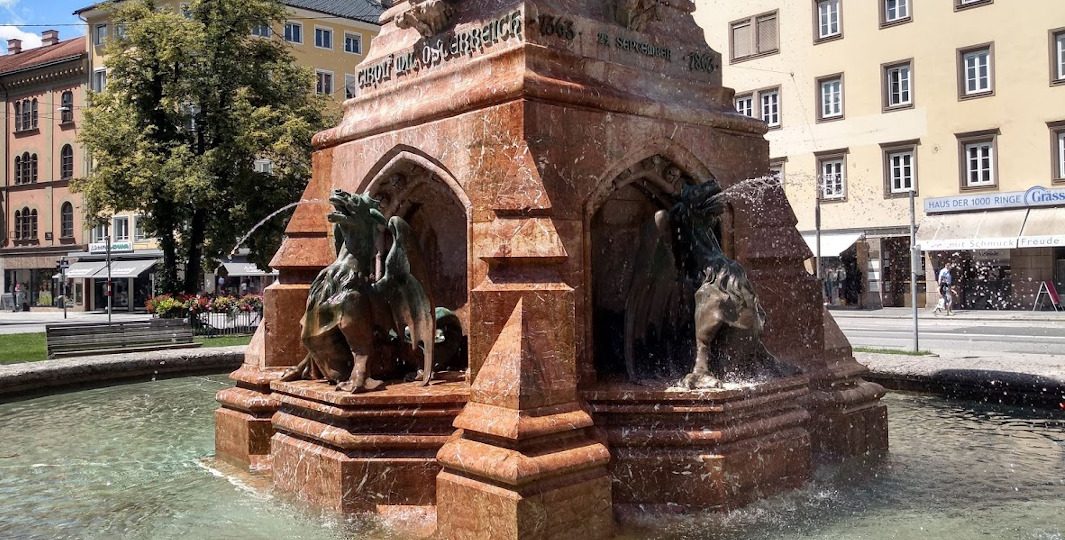 Want to stop here? Do like the locals. Grab a sandwich from Bäcker Ruetz and bask in the sunshine next to the Rudolf Fountain.

And now for something completely different. Keep walking down Wilhelm-Greil-Strasse and you’ll arrive at our final destination: the Vereinigung Fountain. “Vereinigung” is the German word for unification, and this fountain commemorates the eight districts that came together to form the city of Innsbruck. If you look closely at the fountain you’ll see eight holes in the stone, one for each district. 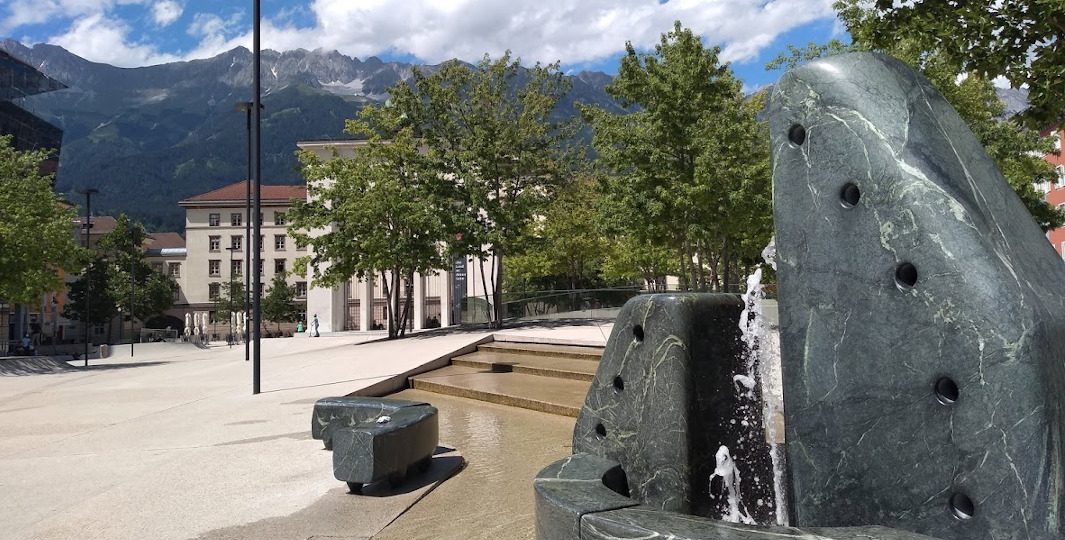 The best way to cool off on a hot summer’s day. ©Fiona Park

But the best thing about the Vereinigung Fountain is that it’s meant to be jumped in (unlike the rest of the fountains on this tour, FYI!). So whip off your shoes, splash around on the watery steps, and then find a shady spot under the trees on Landhausplatz and soak up the Innsbruck atmosphere.

Want to stop here? Grab a bite to eat at the Breakfast Club or Stieglbräu, try your luck at the Innsbruck Casino, or hang out with the cool kids in the skate park.

Innsbruck turns off its fountains during the winter so that they don’t freeze., so if you’re doing this tour in January, don’t expect to see any water. However, do expect to see these beautiful fountains covered in snow, which is equally as lovely!

English copywriter and translator based in beautiful Innsbruck. Born in the UK, now living the simple life in the mountains.

It is inconspicuous and simple from the outside, but inside it is full of stories, monuments and…