8 Of The Best Children’s Playgrounds In Innsbruck

The recent lockdown and subsequent closing of all the playgrounds for a period of two months has made me appreciate them all the more upon their re-opening.  As the father of a 7 year old and 2 year old, they provide a bit of a lifeline. Luckily, Innsbruck is well served by several fantastic playgrounds. Here’s a little guide to eight of the best within easy reach of the city centre.

This is a hidden gem, so hidden you won’t find it on google maps. Nevertheless, it’s a favourite with locals and those in the know, as its air of tranquility in the middle of the city offers a touch of respite from the crowds and traffic nearby. It’s in the grounds of a monastery, with chickens clucking around the perimeter fence that keeps the children safe.  It’s a nice spot for breastfeeding, nappy changing.  There’s a table and bench for parents to sit at.

To find it, as you go up Mariatheresienstrasse towards the Triumphforte (arch), turn right just before the Goldene Krone Hotel.  Go through the passageway, through the turnstile, then right onto the car park.  Keep walking till you get to the fence surrounding the playground. 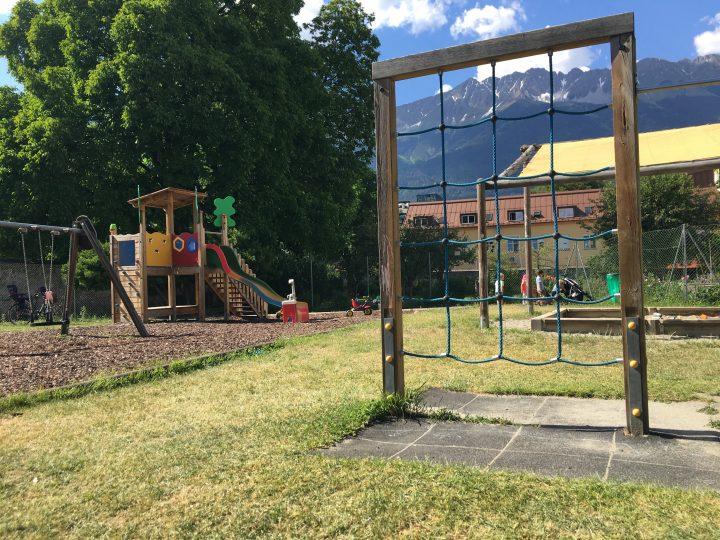 This one’s not hidden at all so it is very popular.  It’s a lot of fun though, with it’s large climbing fort and inventive sand play area, which includes a tap and chutes for water to run down (take buckets and spades if you can!) The Hofgarten is a beautiful and well kept city centre park, complete with duckpond, giant chess board and (a recently refurbished) bandstand in the centre.  It’s one of the best ‘lazing around’ spots for Innsbruckers on hot sunny days.  Well worth a visit even if you don’t intend going to the playground on the corner, near to the Landestheater.

This is part of the promenade on the north side of the river Inn, between the Universitätsbrücke (University bridge) and ‘Freiburgerbrücke’ bridge, east of the Innbrücke (bridge by the market square) It’s a lovely short walk from the centre of the city in an area that buzzes with activity on warm days.  There’s an outdoor gym, small basketball court and posts for slacklines just before you get to the playground, and table tennis tables just beyond it. The parkland surrounding the play area is beautiful and the play facilities are nicely spread out, so it never feels too crowded despite the popularity of this playground.

This is a personal favourite of mine, partly as the walk there is so rewarding.  This is up in the woods just to the east of the Alpenzoo station of the Hungerburgbahn. So, a bit of an anomaly considering the others featured here are in the city centre.  But if you do go up to the Alpenzoo (highly recommended!) and want to stay up in the woods a bit longer this is an option.  Having said that, the Alpenzoo also has an excellent playground within its grounds. The views over the city from the edge of the large, flat, grassy play area are really something to behold at Judenbühel though.  Some fences have recently been constructed to make the area safer.

This is the large grassy island behind the Sillpark shopping centre, on the western edge of the Sill tributary of the river Inn.  It’s a lovely park, complete with duckpond and a wooden footbridge.  My seven year old is a big fan of the play facilities.  It’s little wonder, as there is an excellent range, featuring no less than three slides of various lengths. My two year old loves it here too although he is very drawn to the fast-spinning roundabout, making it a little stressful for me! 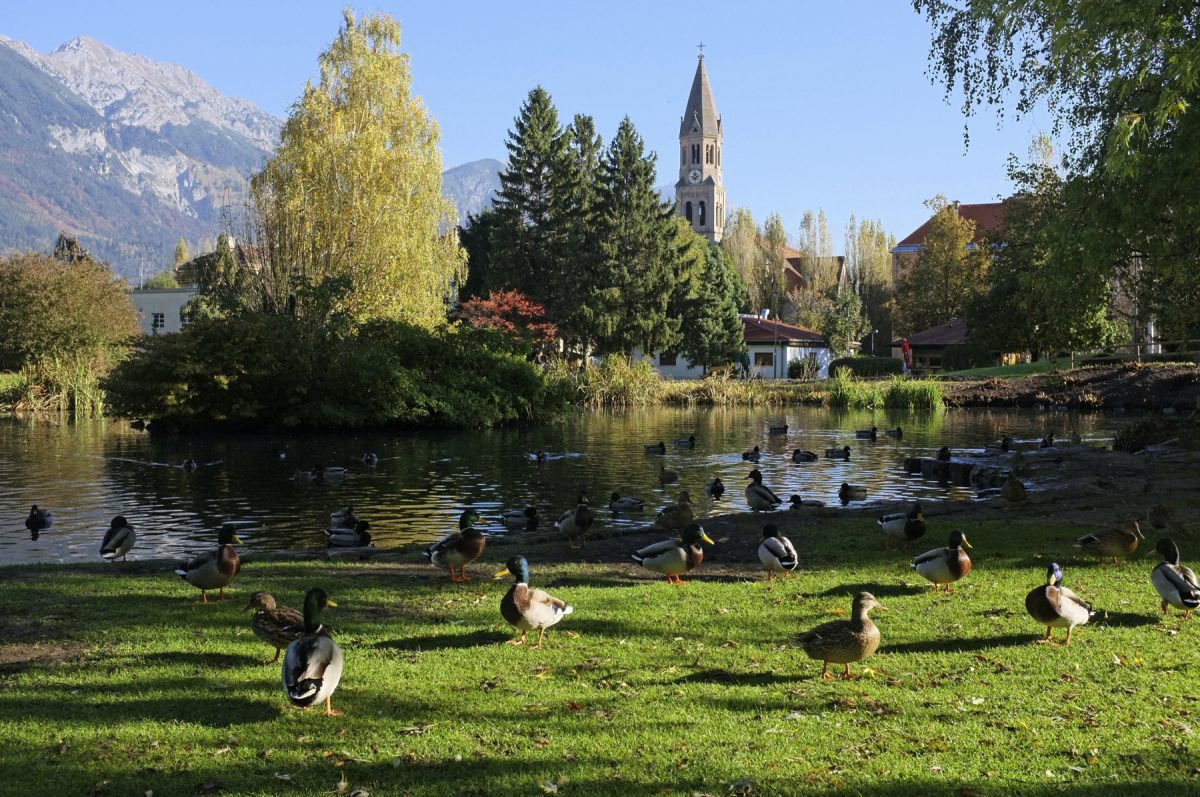 This is behind one of Innsbrucks biggest primary schools, in the city’s Saggen district.  It’s got a zip line! That’s why it just sneaks into this feature because the rest of the facilities are not particularly special to be perfectly honest.  There’s a football pitch next to it which is very popular with older children although there’s plenty of space for ball games in the playground area too. 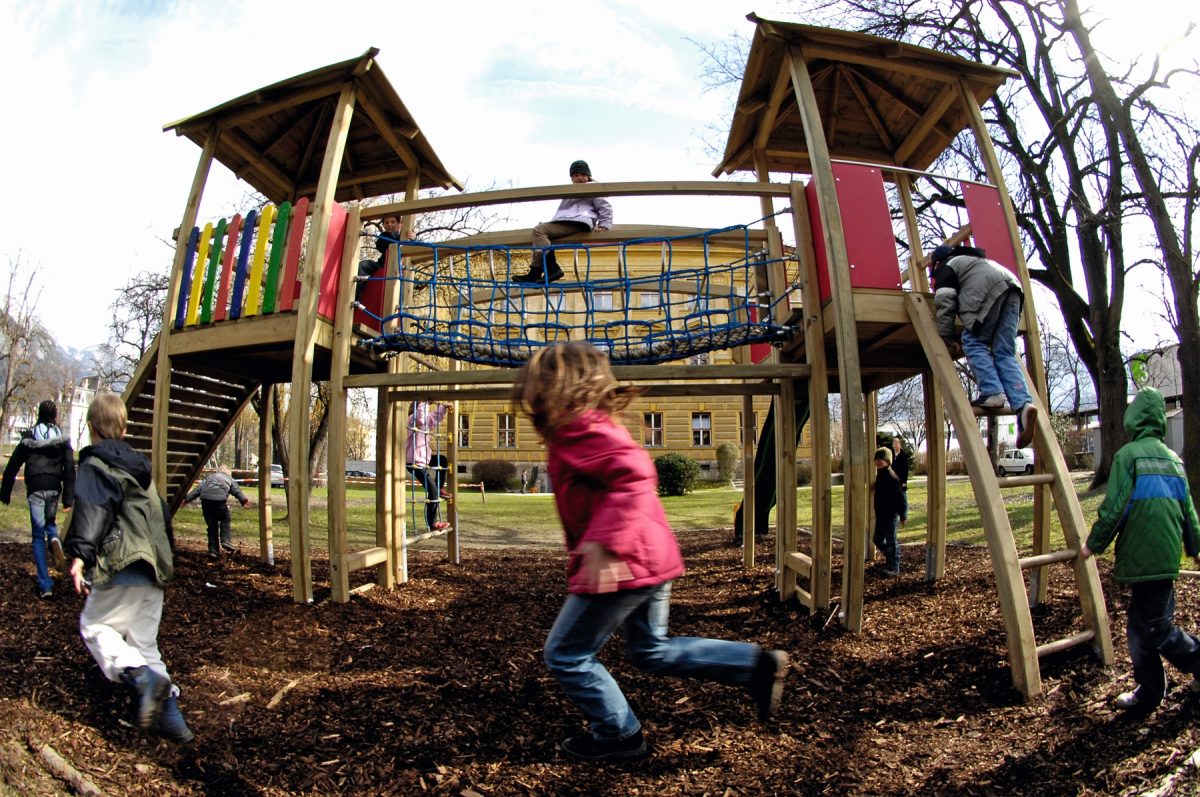 A fairly new playground, whose central location makes it very popular.  This is just to the east of the Innbrücke (the bridge next to the market place) on the north side of the river.  The gravel floor is not the nicest (particularly if you have a toddler who is prone to throwing stones..) but the facilities are good.  We call this the ‘Pirate ship playground’, as that’s the concept it’s built around. One of the highlights is the mast, with a lookout you climb up to via a rope ladder. Be warned: it has a fast spinning roundabout so make sure you keep a close eye on your toddlers. 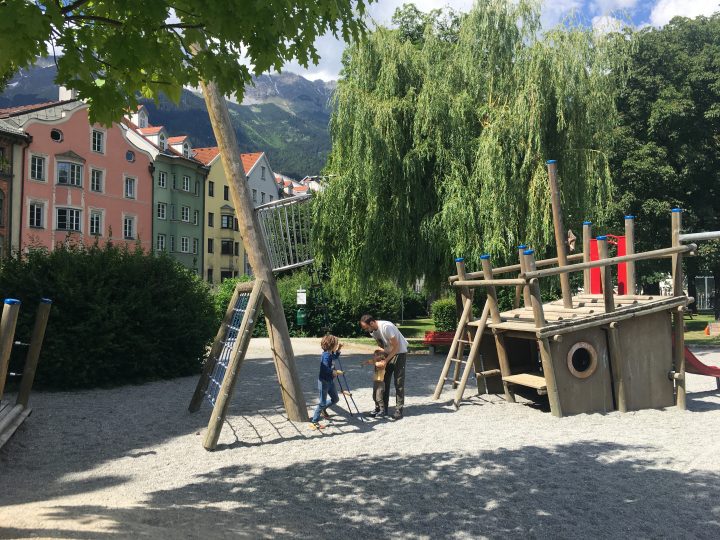 One of the newest playgrounds in also one of the best and most popular.  This has got a little something for everyone. There’s an outdoor gym, table tennis table with a solid metal net, hammock swings and plenty of grassy ground for the parents.  The views over the river up to the Nordkette (northern mountain chain) are spectacular too of course.  You can cycle or walk there safely and easily as it lies next to the Inn, 100 metres or so past the Löwenhaus station on the southern side. This is perhaps the one I would recommend most highly. It’s certainly the one we visit most often.