I’m very happy to finally shoot part of an Epic Innsbruck in the city centre – the old town, to be exact. Freerunners from the 4 Elements Academy certainly gave us the run around!

Filming in the city centre

It’s difficult to film in the city for Epic Innsbruck for a few reasons. ‘Most’ epic activities and sports happen on the mountains and there are more restrictions and regulations in the city in terms of filming, especially with the drone.

Max Boschi from Drone Project, who shoots nearly all of the Epic Innsbruck aerial shots, gained very special permission from Austro Control (the national flight control authority) to be able to film in the city centre, which is how we got the unique shot of the guys running towards the glorious Golden Roof with Nordkette in the background. 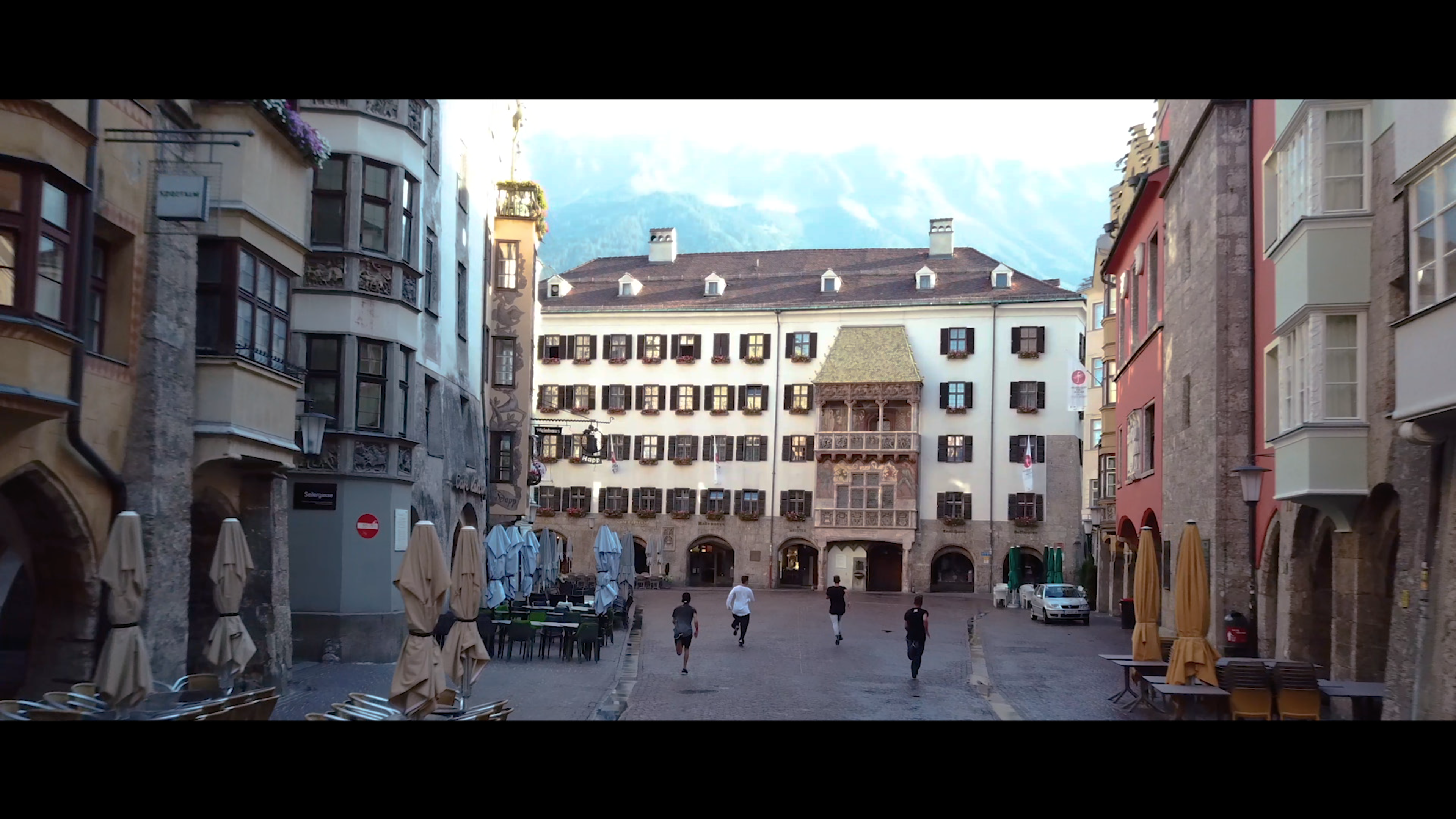 I’ve known Lukas Steiner from 4 Elements Academy for a few months. He holds multiple Guinness World Records and has appeared on many TV shows such as Ninja Warrior Austria.

Knowing the talents of him and his team, I was very looking forward to this shoot. Unfortunately, Lukas was abroad at the time of filming.

The 4 Elements Academy athletes featured in this Epic Innsbruck episode are Mario Fuchs, Philipp Gatterer, Daniel Rinner (Dani) and Stefan Dollinger (Steve) who are all from the local area. It is incredible what these guys can do, especially for their age, as Daniel and Stefan are only 15 years old! 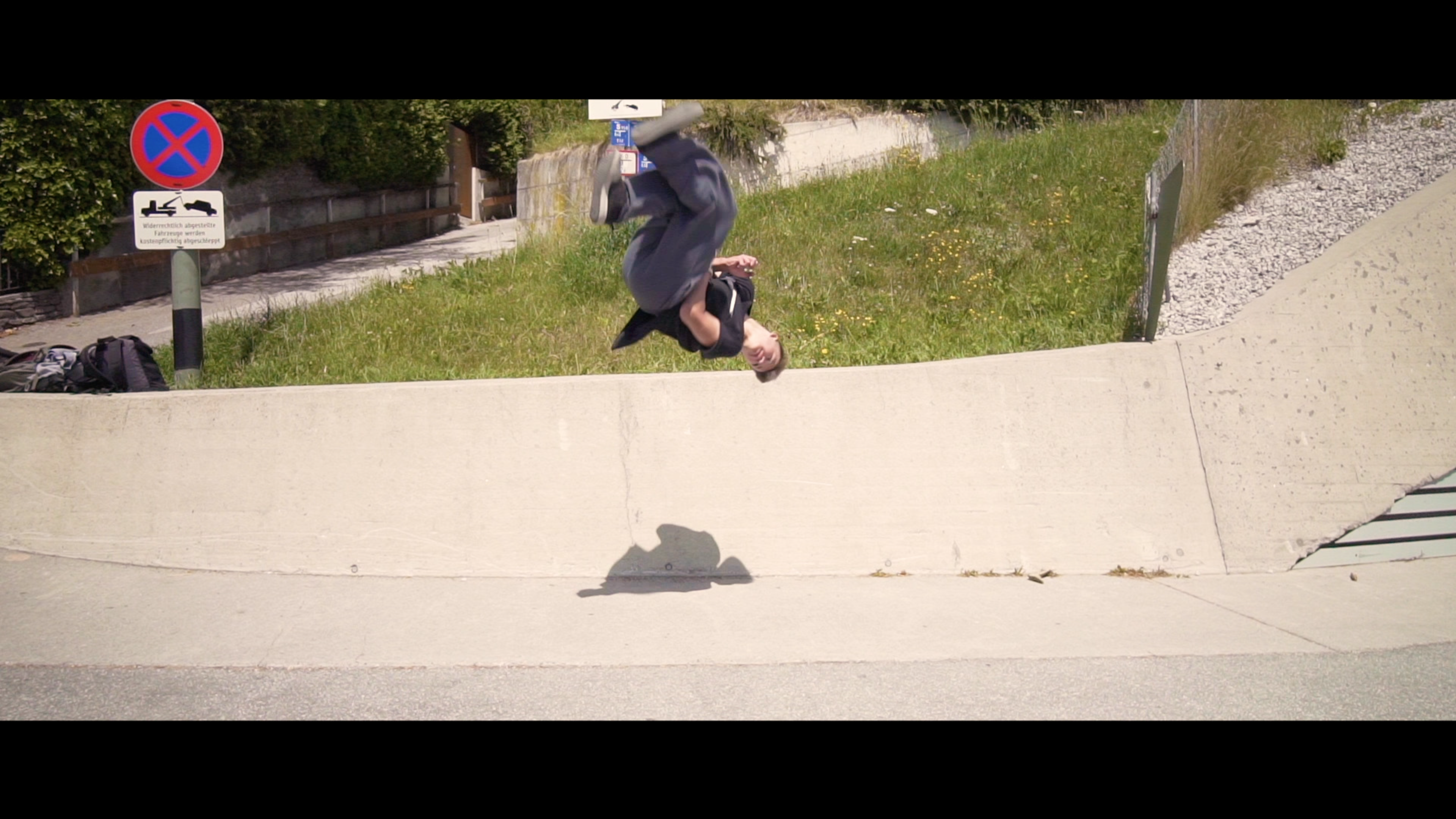 Stefan Dollinger flipping off the wall.

The 4 Elements Academy is Austria’s largest training centre for parkour and freerunning as well as modern fitness trends, sports physiotherapy and training in health, fitness and trend sports. It is located just outside of Innsbruck in Hall in Tirol.

We started early so there were less people in the old town, thus easier to manage. We filmed some sequences in the Swarovski Store Innsbruck (who gladly let us play in the store before they opened), which included the iconic CASCADE chandelier by Vincent van Duysen, followed by the store’s newly designed entrance by artist duo Fredrikson Stallard which I already wrote about in this article. 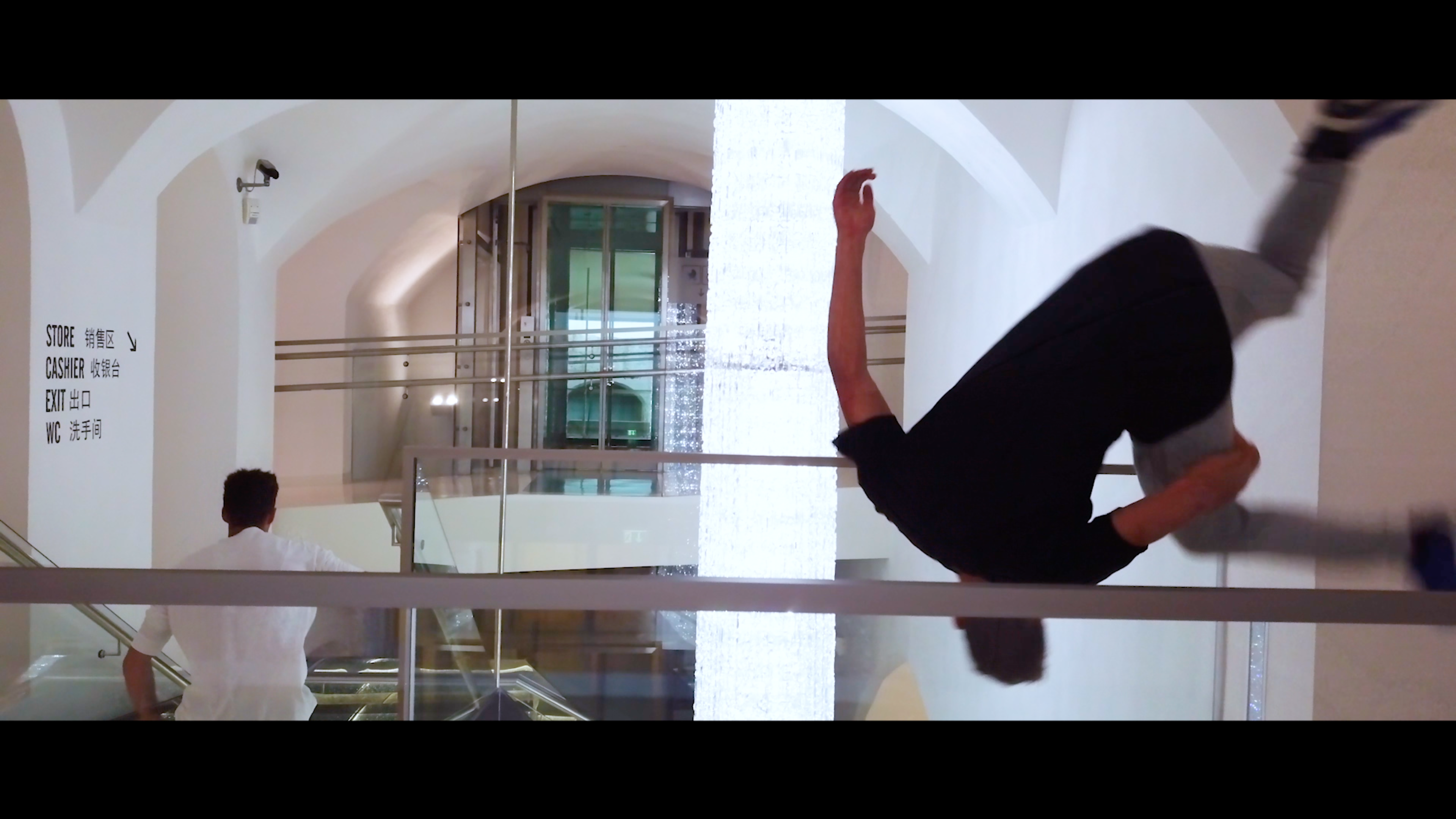 Freerunning in the Swarovski Store next to the CASCADE chandelier by Vincent van Duysen.

Next stop Hungerburg. I love the design of the Hungerburgbahn stations by Zaha Hadid because it reminds me a lot of the 80s film Flight of the Navigator, so I’m happy to feature the space-ship-styled architecture in this episode. 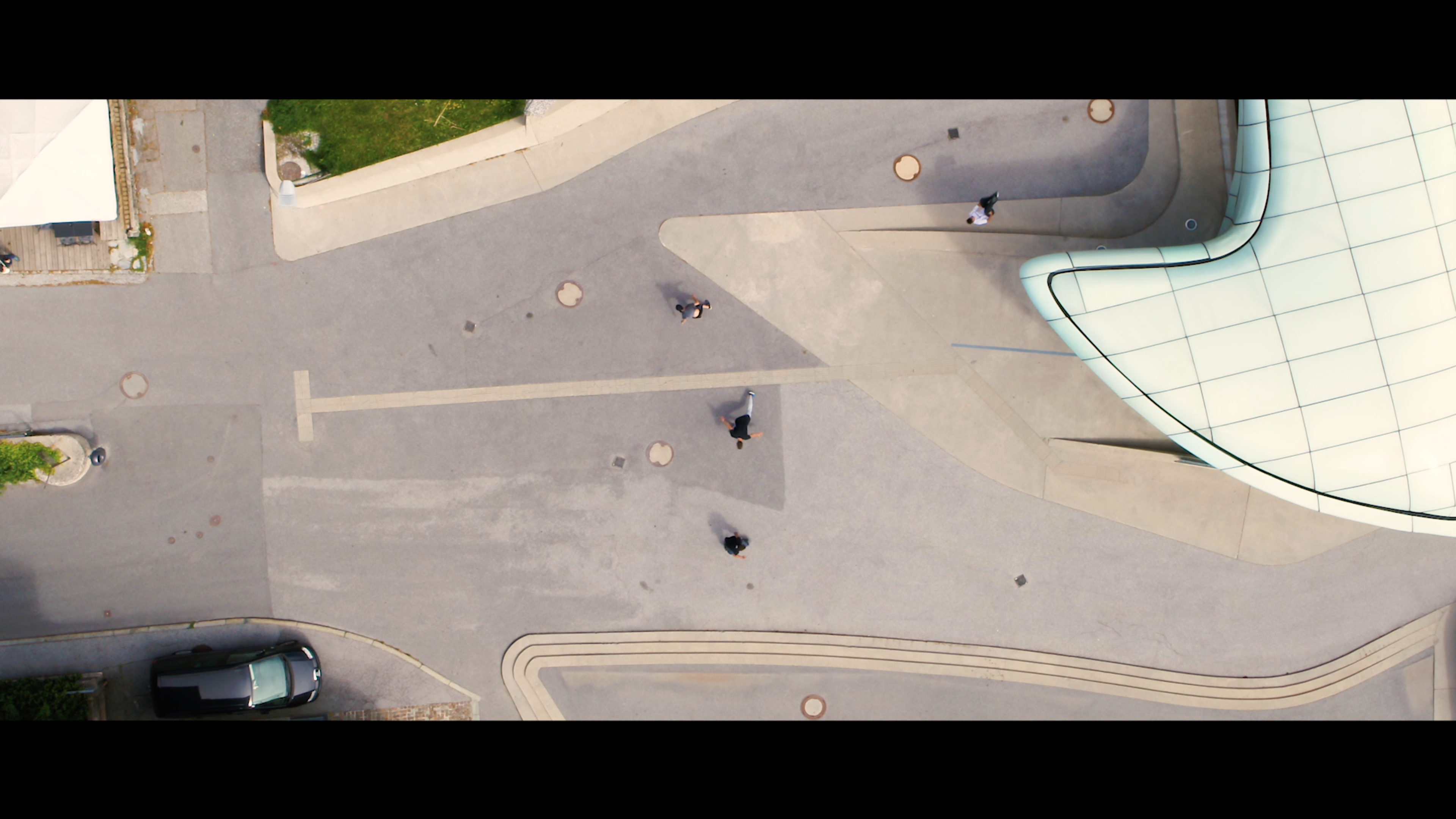 To finish, we jumped to the other side of the valley and caught the brand new gondola to the mountain station of Patscherkofel (my favourite home mountain), and explored the freerunning possibilities along the hiking trails and within the gondola station itself. 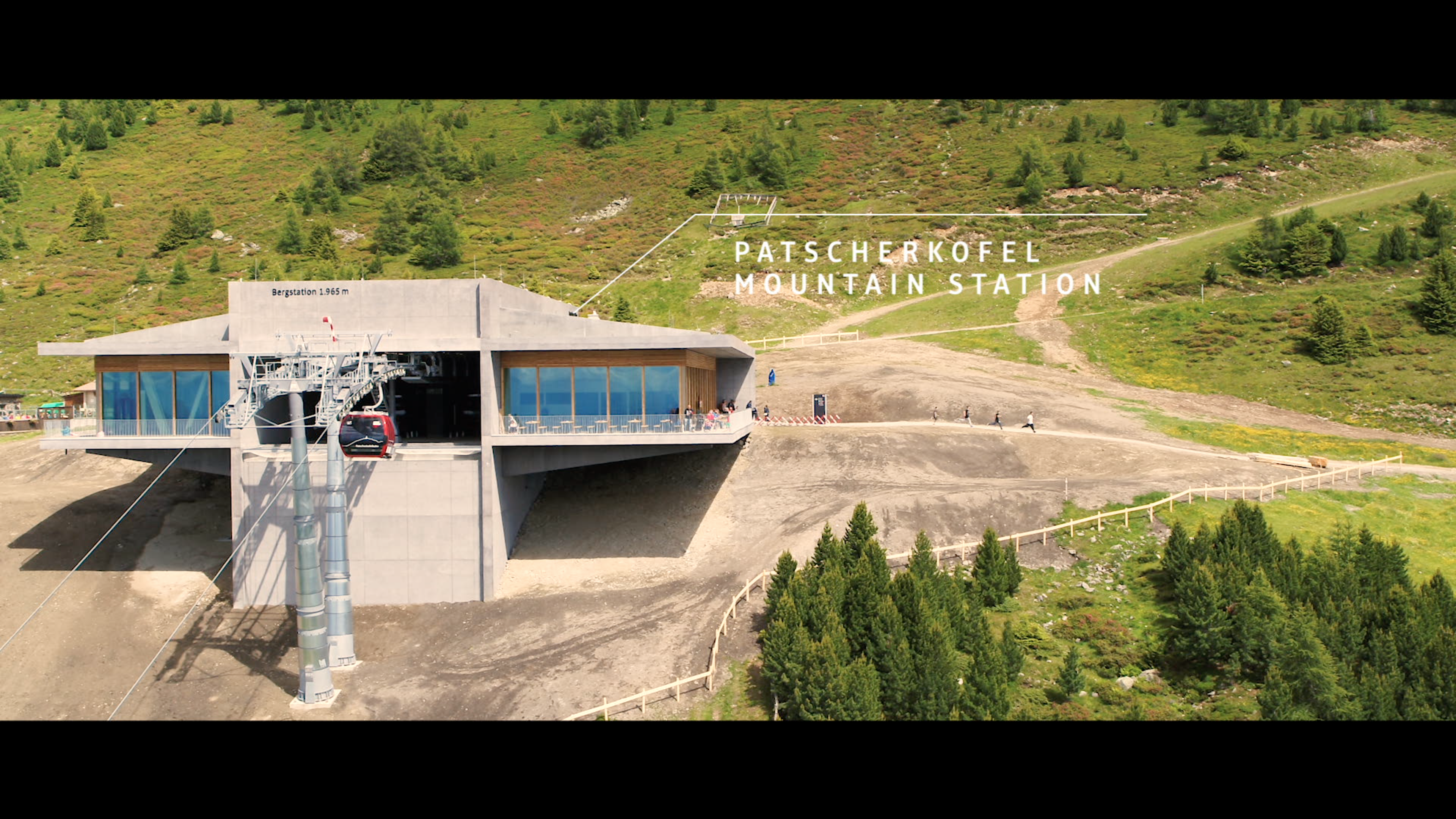 Freerunning can be very dangerous. This video was produced with trained athletes and permission was granted before filming took place, including flying drones in the city. You must respect landowners and property rights when performing any type of freerunning. To fly drones in Austria, you are required by law to be insured and gain the appropriate permission from Austro Control, particularly within an urban environment.

If you are interested in trying freerunning, get in contact with the 4 Elements Academy for more information.

All photos are taken by me or are screen grabs from video, unless otherwise stated.