The Martinswand, where Emperor Max stood on the edge of his grave

“If only they kematen, if only they kematen!” In 1484, the cave in the Martinswand near Zirl sounds out desperately. The caller in the wall is none other than the still youthful later Emperor Maximilian. For three days and three nights he has been stuck in the vertical rock face, not daring to move forward or back. He is shaken by anxiety attacks and hopes for rescuers to come. Perhaps he even regrets having followed the chamois and ibexes in his desire to hunt in this impassable and steep terrain. And that, to make matters worse, his misadventure was witnessed by the public. The first dramatic live event of the Middle Ages? I am tempted to assume just that. 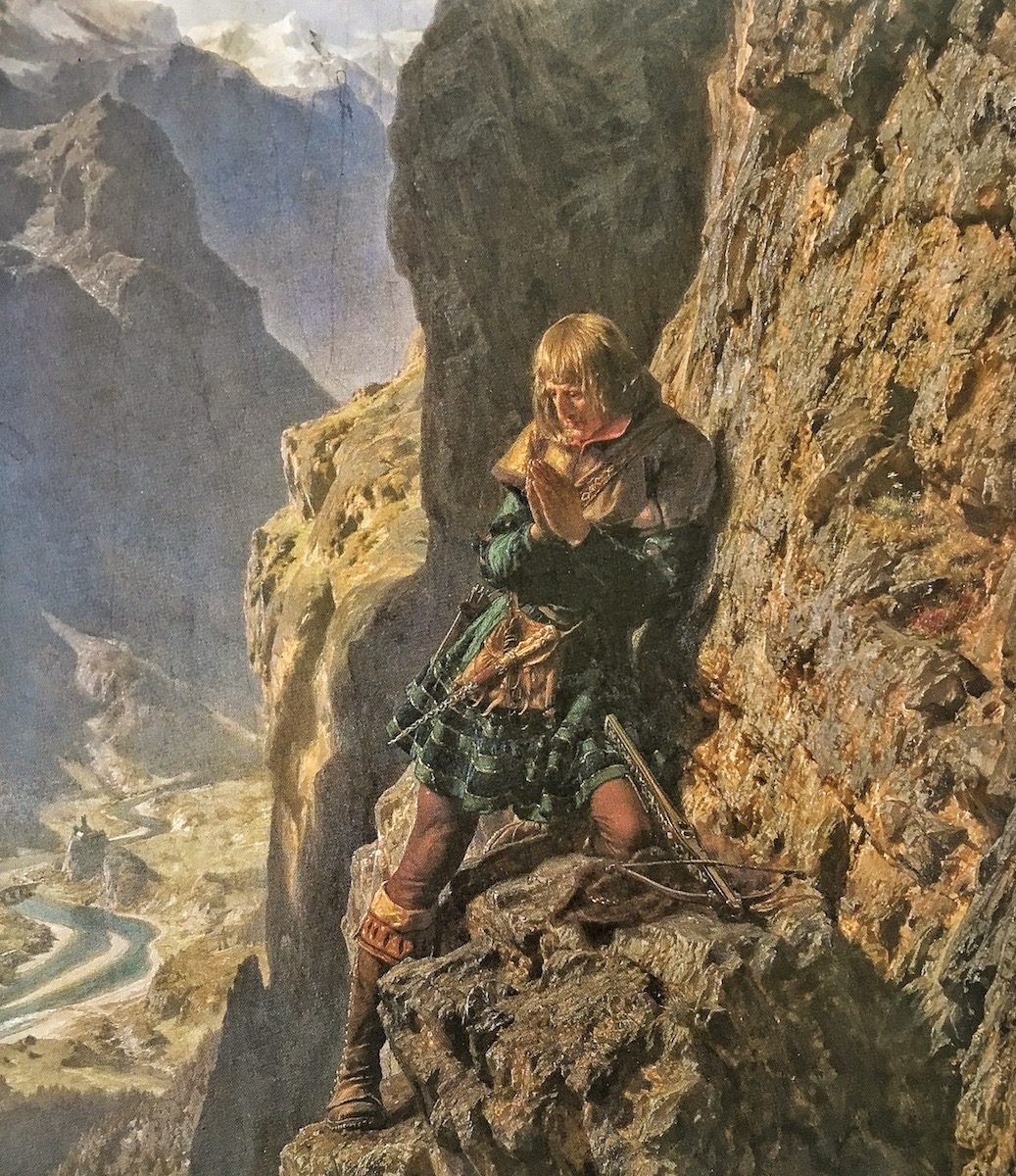 This is how the painter Ferdinand Graf zu Harrach saw the emperor: trembling and praying in the Martinswand. 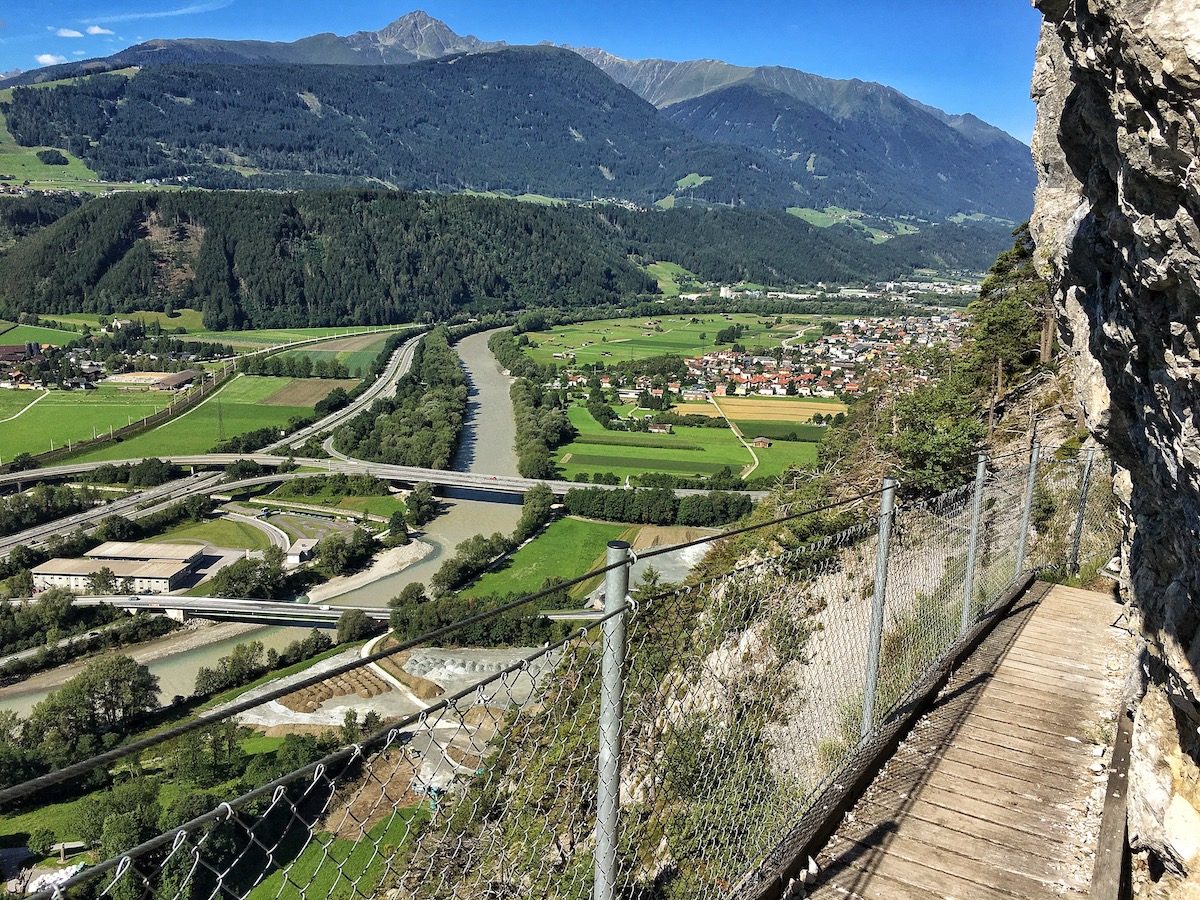 Where today the footbridge runs just before the Max Grotto in the Martinswand, Emperor Maximilian might have crouched. ©Werner Kräutler

Heaven comes to the rescue

The legendary rescue of the emperor from the Martinswand.

In this almost hopeless situation, Maximilian asks to be shown Holy Communion, at least from a distance, as was done for the hopelessly lost at that time. Suddenly a young man in peasant’s clothes appears and shows him the safe way out of the wall. “Be of good cheer, my lord!” the boy begins to speak – “God is still alive, who can and will save you. Only follow me and do not be afraid!” The peasant boy leads the emperor safely into the valley, Maximilian is saved. The fact that the rescuer then disappears into the cheering crowd is just what the Habsburg needs. For soon it is said that the emperor has been saved by an angel of the Lord.

Every child in Tyrol knows this legendary incident. Just like the erroneous assumption that the place name Kematen goes back to the plea of the emperor, “if only they kematen…”. In fact, the name of the place comes from the word “Kemenate”. This was the name given to a heated chamber in the Middle Ages.

How this incident had taken place in detail, however, there are only speculations about it until today. However, it is most likely true that the emperor was inconvenienced in the Martinswand. His salvation by an angel, however, is then knitted exactly from that material that makes a legend out of an accident.

There are indications that Maximilian himself soon began to knit this, his own legend. For he who is saved by angels – so majesty may have calculated – is a favorite of the gods for the common people. And so he had the event – the ‘accident’ in the Martin Wall – reported in the verse epic ‘Theurdank‘. For better explanation even including a graphic representation. (See illustration below). theurdank’ is actually a biography, a description of Maximilian’s bridal journey to Mary of Burgundy and contains adventures and dangers that the bold knight Theurdank vulgo Maximilian experienced and had to endure. This includes the almost fatal hunt in the steep face near Zirl. The angel saga, on the other hand, probably did not come directly from Maximilian’s hand. However, the tale of the miraculous rescue that emerged among the people must have been anything but inconvenient for him.

The show hunts at Martinsbühel

A decisive role in this legend plays the Martinsbühel. Situated directly at the foot of the Martinswand, this elevation was a strategic point of special importance already in the Latène period. The Romans built the Teriolis fort here as a supply depot for the garrison troops on the Danube-Iller-Rhine-Limes, the new borderline of the empire

Woodcut from the verse epic ‘Theurdank

On the remains of the fort, the fortified complex “Sant Marteinsberg bei Zierlen” was then built in the Middle Ages. Duke Sigismund the Rich and Emperor Maximilian later expanded the castle into a hunting lodge. No wonder, since from this point the ibexes and chamois in the Martinswand were always in view

And now we come to theheart ofthematter: here the emperor, who was obsessed with hunting, organized the so-called show hunts. The hunts were held ‘in front of the public’, so to speak, mainly for ibex and chamois. That such events belonged to the outstanding events for clergy and high nobility should be undisputed. The fact that this ‘incident’ of Maximilian in the Martinswand took place in front of onlookers may be assumed. Narratives report that word of the emperor’s almost hopeless situation quickly spread among the people and that “everywhere people were pleading for the salvation of their beloved lord. This was probably the very first live report in the High Middle Ages. Not bad either, in my opinion. 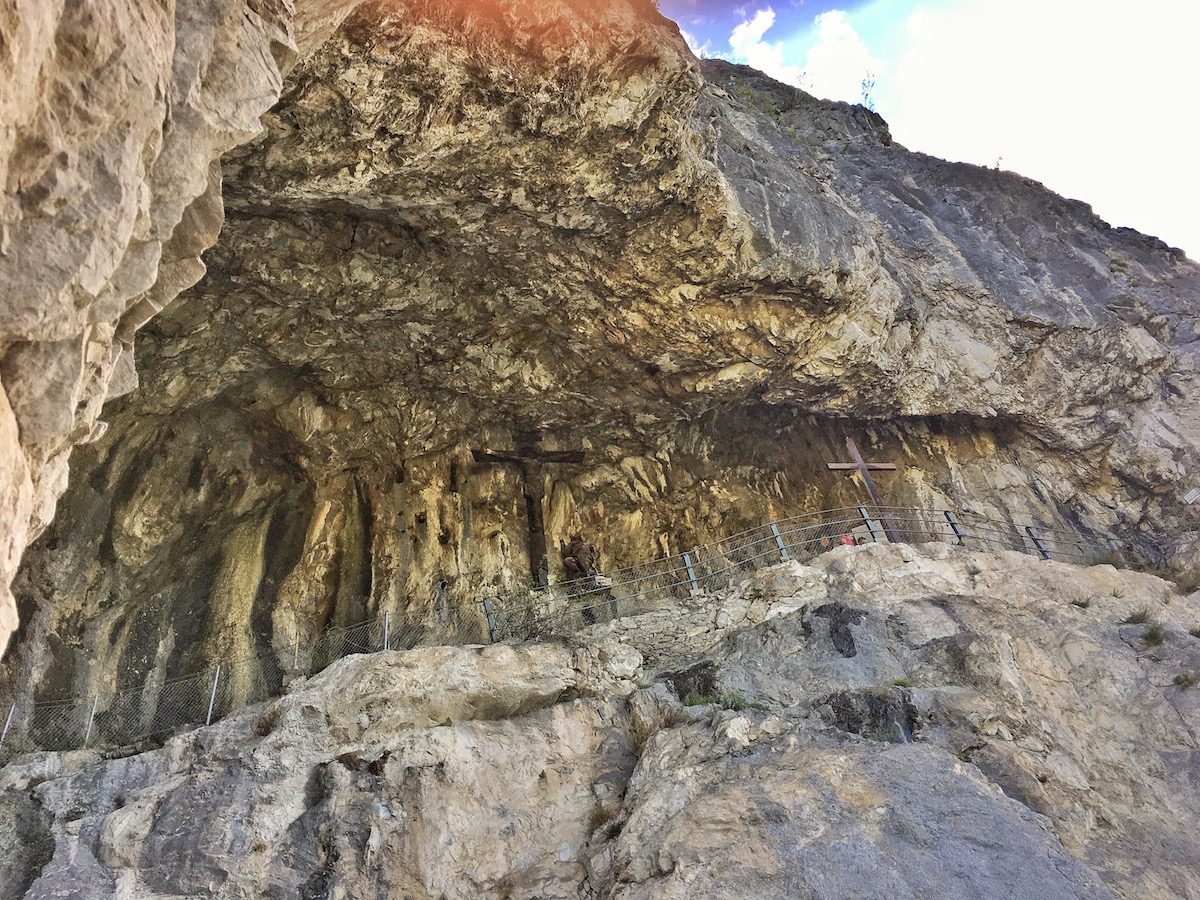 The rock overhang makes the Maximiliangrotte in the Martinswand the ideal setting for a miraculous rescue. ©Werner Kräutler

The Martinsbühel with the Palas and the Martinskirche, built over what is perhaps the oldest church in Tyrol from the 5th or 6th century. From here nobles and clerics followed the hunt in the Martinswand. And the misfortune of the emperor. ©Werner Kräutler 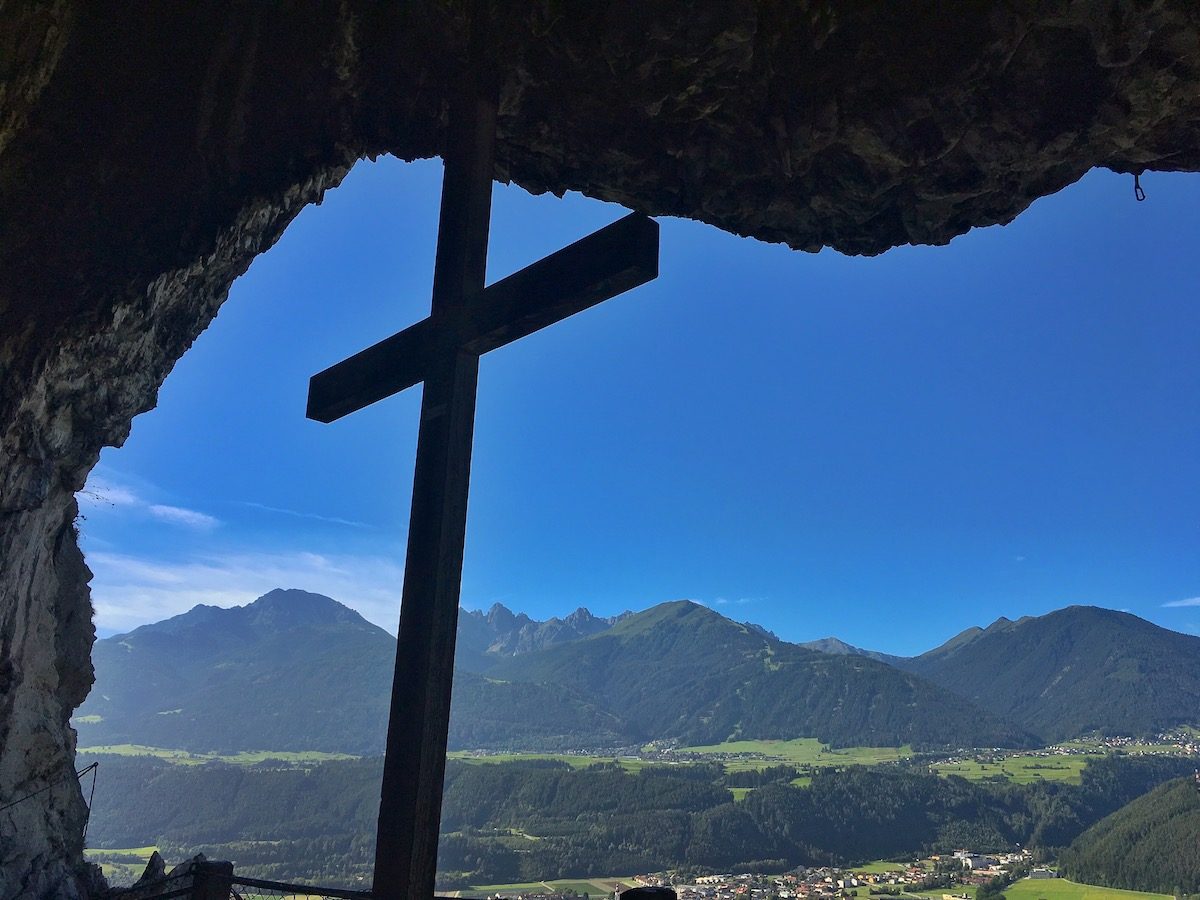 View from the ‘Maximilian Grotto’ to the western low mountain range. The first cross was placed in the wall at Maximilian’s instigation as early as between 1503 and 1504. ©Werner Kräutler

Maximilian was, as we know today, a highly gifted self-promoter. In new German: he was a marketing genius. The Habsburg was one of the first rulers to recognize the importance of the printing press, which had been invented shortly before. And in order to strengthen his position and popularity, as well as the memory of him among the people, he relied on the printed word in combination with woodcuts as early as the beginning of the 16th century. His commissioned work “Theurdank”, prepared long in advance, was intended to present him as a God-sent hero who defied all the adversities of this world. In addition, between 1503 and 1504 he had a commemorative cross erected in the grotto, flanked by figures of St. Mary and St. John.

So it’s no wonder that Emperor Maximilian is so popular among the Tyrolean people to this day.

Boundless variety – the 13 ski resorts of the Innsbruck region

13 ski resorts on one ticket Innsbruck is unique. There are thousands of reasons for this, the…

Innsbruck is worth a trip in all seasons, and each is unique and special in its own…

Five days of snow, lifestyle and culture with the SKI plus CITY Pass Stubai Innsbruck

What makes mountain sports, or as in this case freeriding, so exciting? Just one of many possible…