Traditional Tirolean Liqueur made with the gift of Nature: Zapfenstreich

“There is a party today! What will you bring with yoü” For Michael Moser, a Tirolean postgraduate student, the answer was a bottle of the amber-coloured liqueur made by his father at home. It turned out that the Mosers’ liqueur was extremely well-received by his peers and Michael realized that such a gem should be introduced to more people. Together with his equally-enthusiastic classmate, Maximilian Obergruber, Michael started learning the secret recipe passed down by his great-grandfather. Eventually, the duo set up a company in 2015 and their liqueur became available in Innsbruck.

The original family recipe, written down in 1955 © AlpPine Spirits

This traditional recipe is of course a guarded heirloom but I gathered enough information to conclude that their liqueur is unique – even before I actually tasted it. 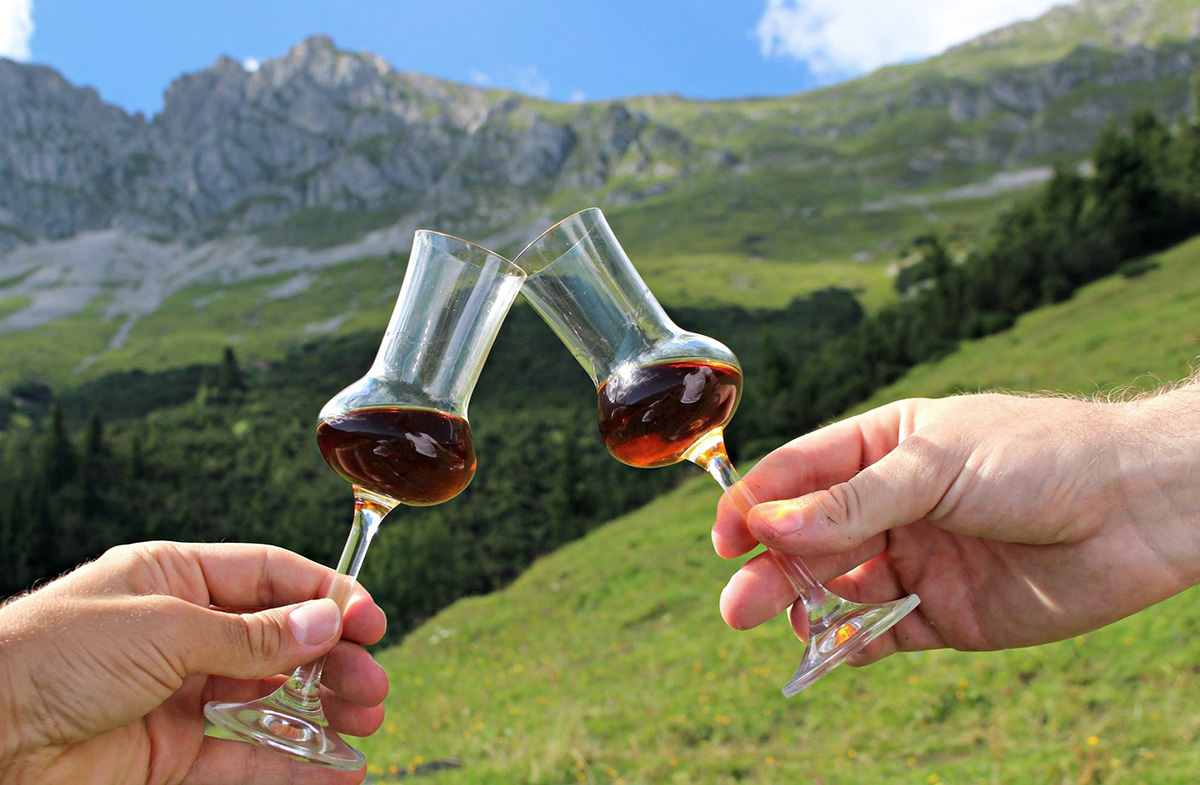 First of all, it contains an uncommon ingredient. The liqueur is called Latschenlikör which means the lead in this Likör is “Latschenkiefer”, a kind of pine (Kiefer). I adore all kinds of pine trees, but liqueur or Schnapps made of Latschenkiefer is much rarer than the ones made of Zirbelkiefer (Swiss stone pine). 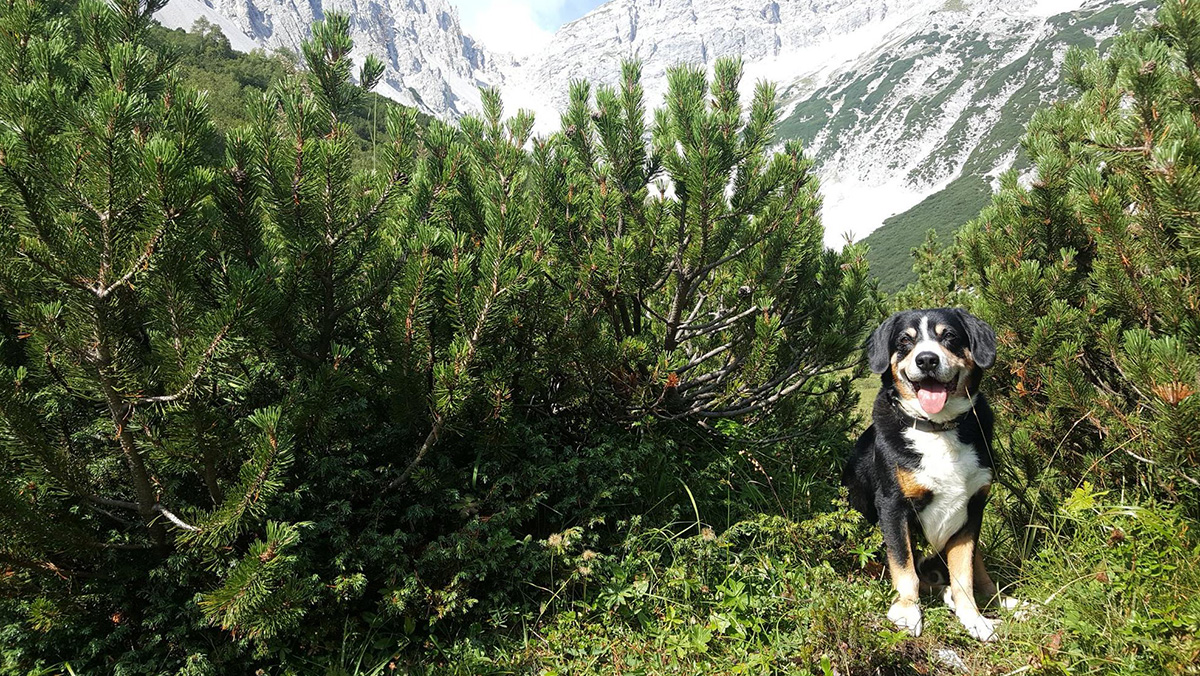 Here Paul shows us the height of Latschenkiefer. © AlpPine Spirits

Latschenkiefer (Pinus mugo) is also known as “dwarf mountain pine” and the trees are indeed short, dense and shrub-like. No wonder they are often chosen for growing Japanese bonsai. Another area of their use is as a traditional herbal remedy.

To make this liqueur, it is the cones that are used and they have to be hand-picked carefully in the mountains. 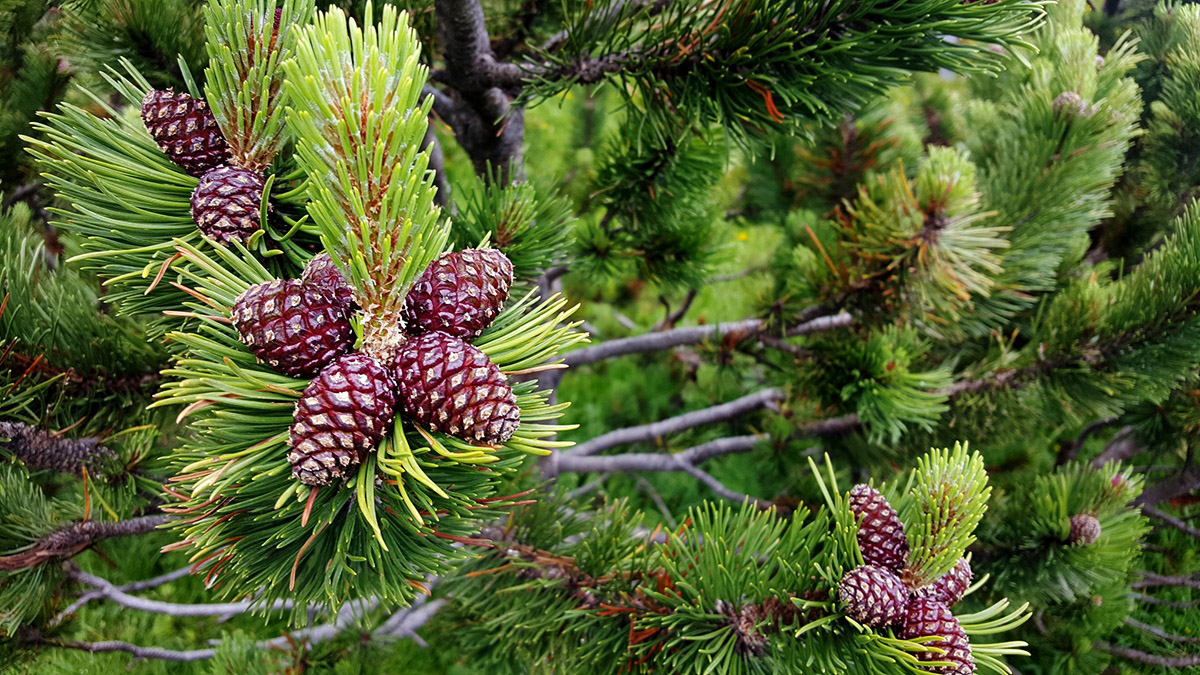 Fantastic Cones and Where to Find Them

The second clue for this Latschenlikör’s uniqueness is that the pine cones are collected from a very special area. 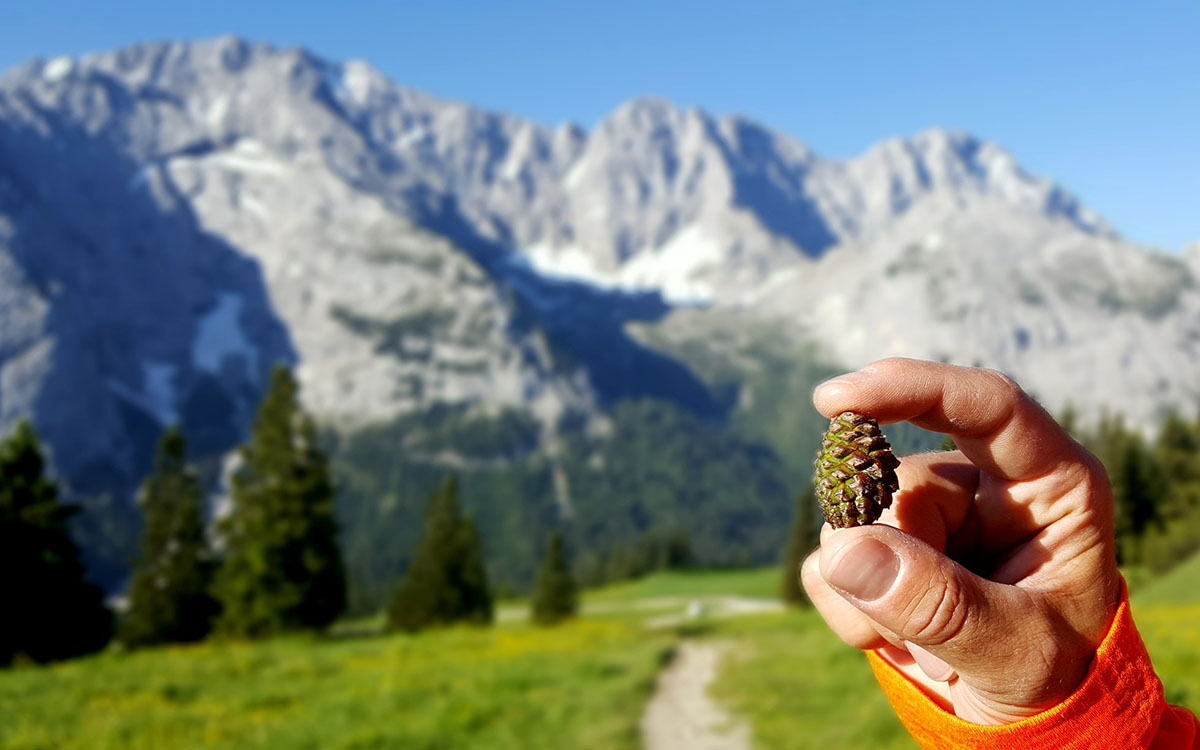 Since Michael and Maximilian had the vision to increase the production, they had to source more cones. For them, it was a moment of fate when they met Mr. Hermann Sonntag, who proposed a brilliant idea for both parties. I wouldn’t simply say Michael and Maximilian were at the right place at the right time, because the encounter happened while they were actively making an effort, visiting mountain huts for marketing and promotion.

The Partnership with Nature

Mr. Hermann Sonntag was a guest at the Umbrüggler Alm, when the young guys presented their Latschenlikör for tasting. Impressed by the liqueur and its potential, Mr. Sonntag suggested using the pine cones from the Karwendel Nature Reserve, of which he is the Managing Director! The Reserve, in return, receives 1.928% of the liqueur’s gross revenue to carry out more good work. The figure is a tribute to the year 1928, when the Karwendel Nature Reserve – the oldest protected area in Tyrol – was set up.

From nature, back to nature © AlpPine Spirits

AlpPine Spirits, Michael and Maximilian’s company, hereby officially became a partner of the Karwendel Nature Reserve. In late summer and early autumn, they enter the area designated by the Reserve – usually at the height of 1,400 metres above sea level – to collect cones from unspoiled mountain pines. 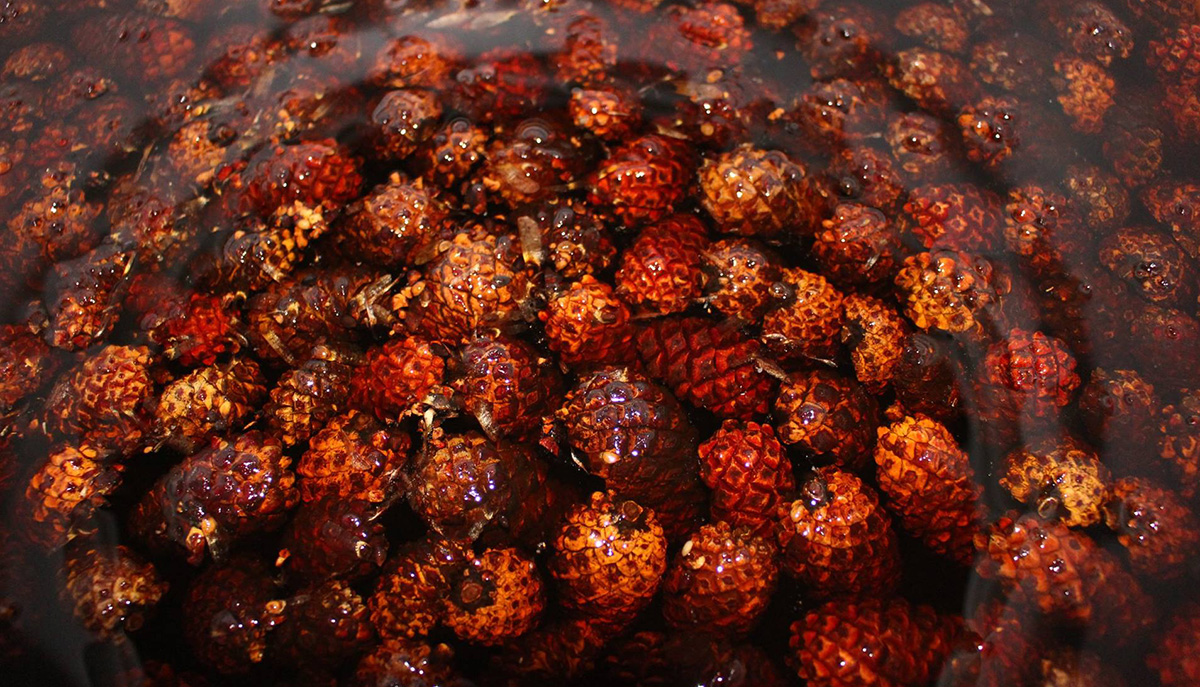 And it is also a good sign that all the ingredients are natural and from Austria.

The precious cones still have closed scales when they are harvested. They are then cleaned, shredded and together with sugar put into neutral spirits to steep for about two and a half months. When the infusion is finally ready, Michael and Maximilian personally bottle the liqueur, label the bottles and present them to the anticipating outlets. 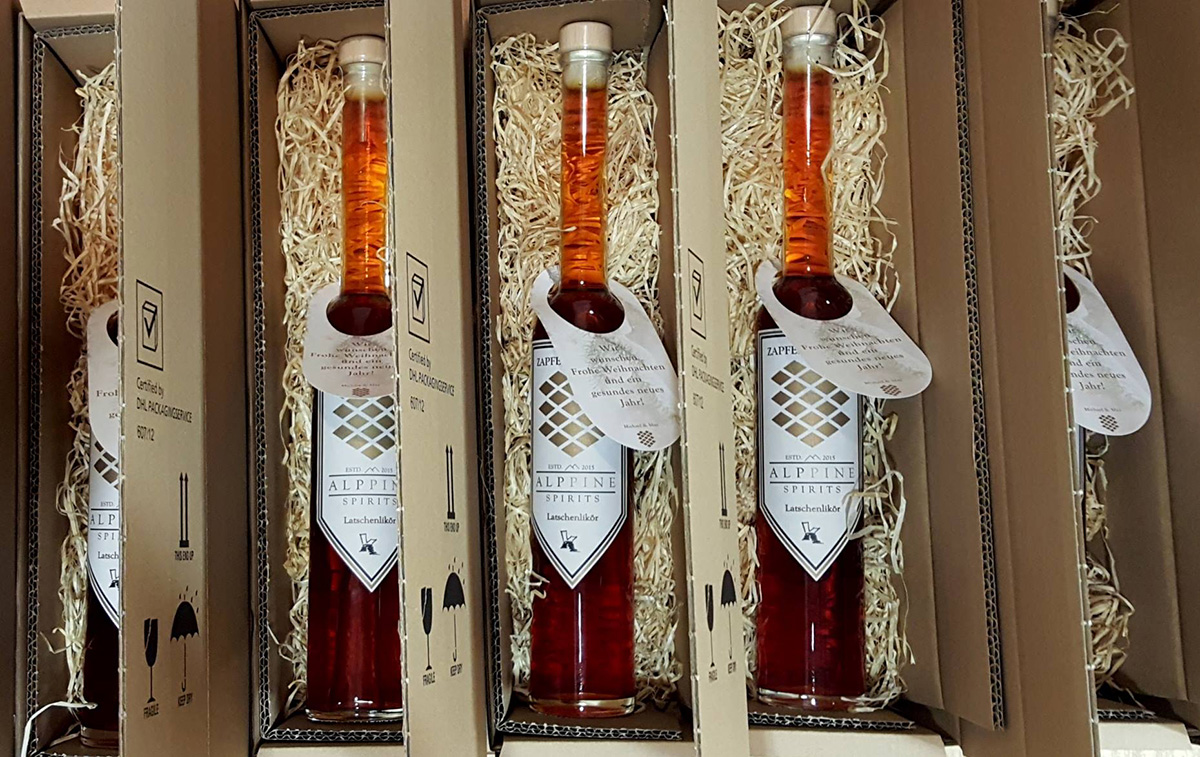 The long-necked bottles of liqueur and Schnapps always look so elegant. © AlpPine Spirits

This liqueur, like every beloved baby, has a name: Zapfenstreich. If you look it up in the dictionary you will find that it means “tattoo” – not the one in the skin but the one in military boots. It sounds puzzlingly masculine to me, but German speakers immediately see the wordplay as Zapfen alone can also mean, well, a pine cone. 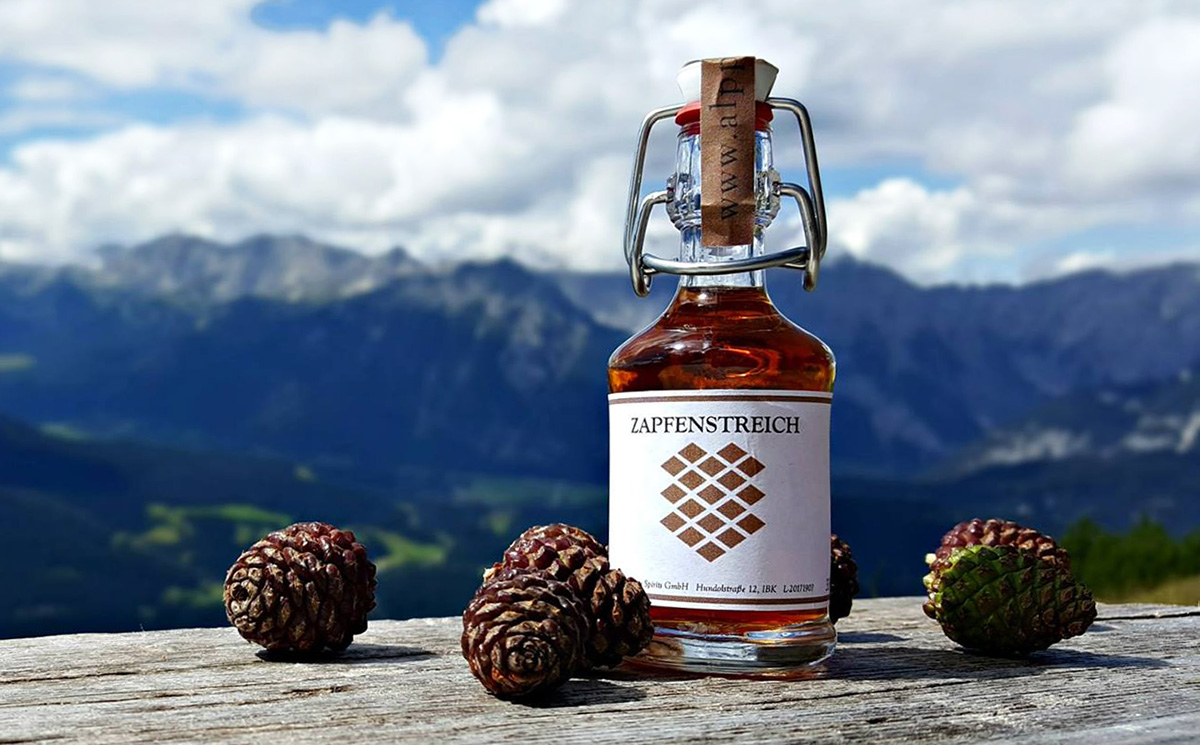 Usually the cone chips are of no further use after being removed from the liqueur. This year (2019), however, AlpPine Spirits collaborated with NAKO Sirup, another young local company, and developed a syrup using macerated cone chips – since they were still aromatic. The pilot product tastes very sophisticated and inspiring and they have decided to produce another batch next year. 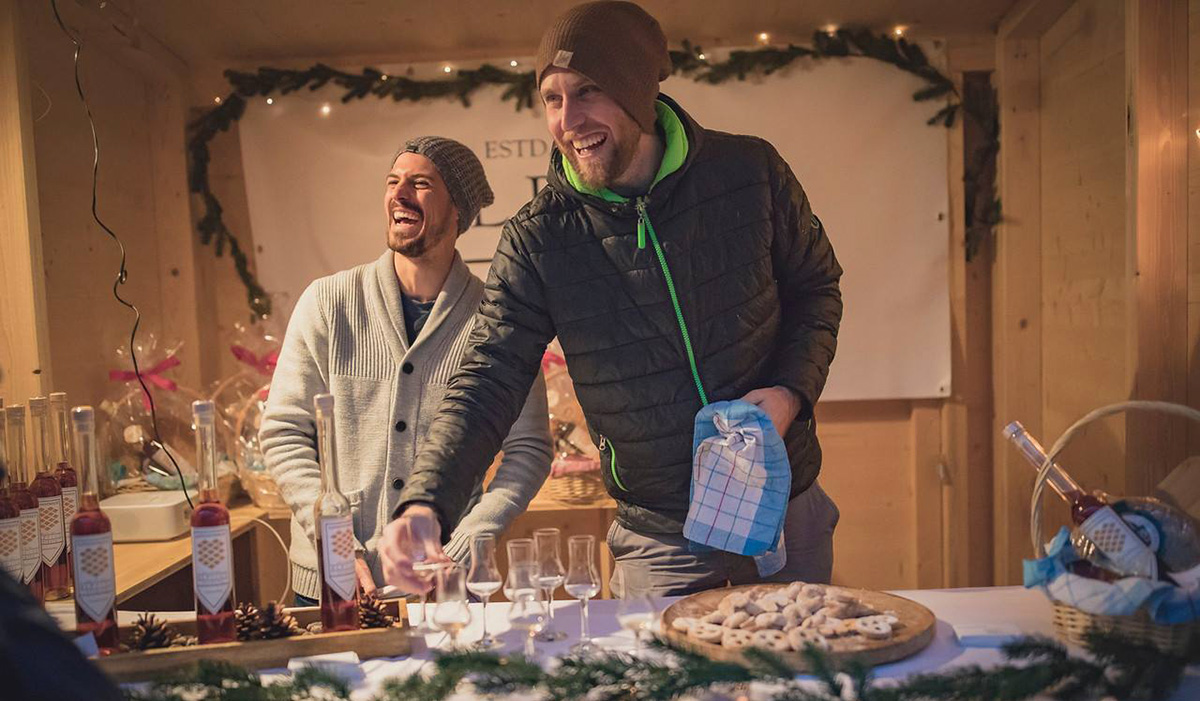 How the liqueur tastes

I asked Maximilian if he still finds it hard to describe the flavours of Zapfenstreich. He does! Interestingly, a customer from the States likened the liqueur to “a Christmas tree in a bottle” and I think Maximilian gladly agrees.

As Zapfenstreich has a macho name and an alcohol content of 32%, I half-expected a hard landing. Actually, the liqueur was quite friendly and soothed by gentle sweetness. The aroma of pine was prominent but still well integrated with the liquid.

It has notes of the experience of older generations, the cheerful memory of a party, the passion of two young men, the climbing of the mountain and the fruit of nature.

Where to try and buy Zapfenstreich

*The Photo on top of this page: © AlpPine Spirits

Camp Nocturno: the sleep festival in the Botanical Garden

From celebration and rest A gentle melody comes from the glass house, in the garden the last…

Gourmet cuisine in the city, magic on the mountain

A "perfect match" is not only in love, but always when two things come together that complement…