Wandering in the neighbourhood can be a luxury, as many of us have felt recently. Wilten, where I have been living for four years, happens to be an ideal area for a walk. It sits in the southern part of the inner city of Innsbruck and is mostly residential and tranquil. A lot of the building facades are richly decorated and many have Art Deco or Art Nouveau elements. Additionally, there are several murals created in the 1950s which are really adorable. Historical artifacts which prompt reflection are also to be discovered in Wilten.

The walk in this article focuses on the western part of Wilten, starting from the West train station (Westbahnhof) of Innsbruck and ending at the historical portal of Innsbruck, Triumphpforte. This leisurely walk is perfect as a Sunday activity as the route even passes by a bakery and a supermarket which are open on Sundays (rare!).

The West train station (Westbahnhof) is actually in the SOUTH of the city and the front faces towards the north. It was completed in 1883 (as Station Wilten) and subsequently increased the momentum of the development in its northern vicinity. Hotels were built nearby and Wilten became the first so-called “satellite city” of Innsbruck.

* The images below can be enlarged by clicking and the route map is at the end of this article.

During World War II the city was extensively bombed, which damaged a number of buildings, including the aforementioned hotels and this building at Sonnenburgstraße 17. ? 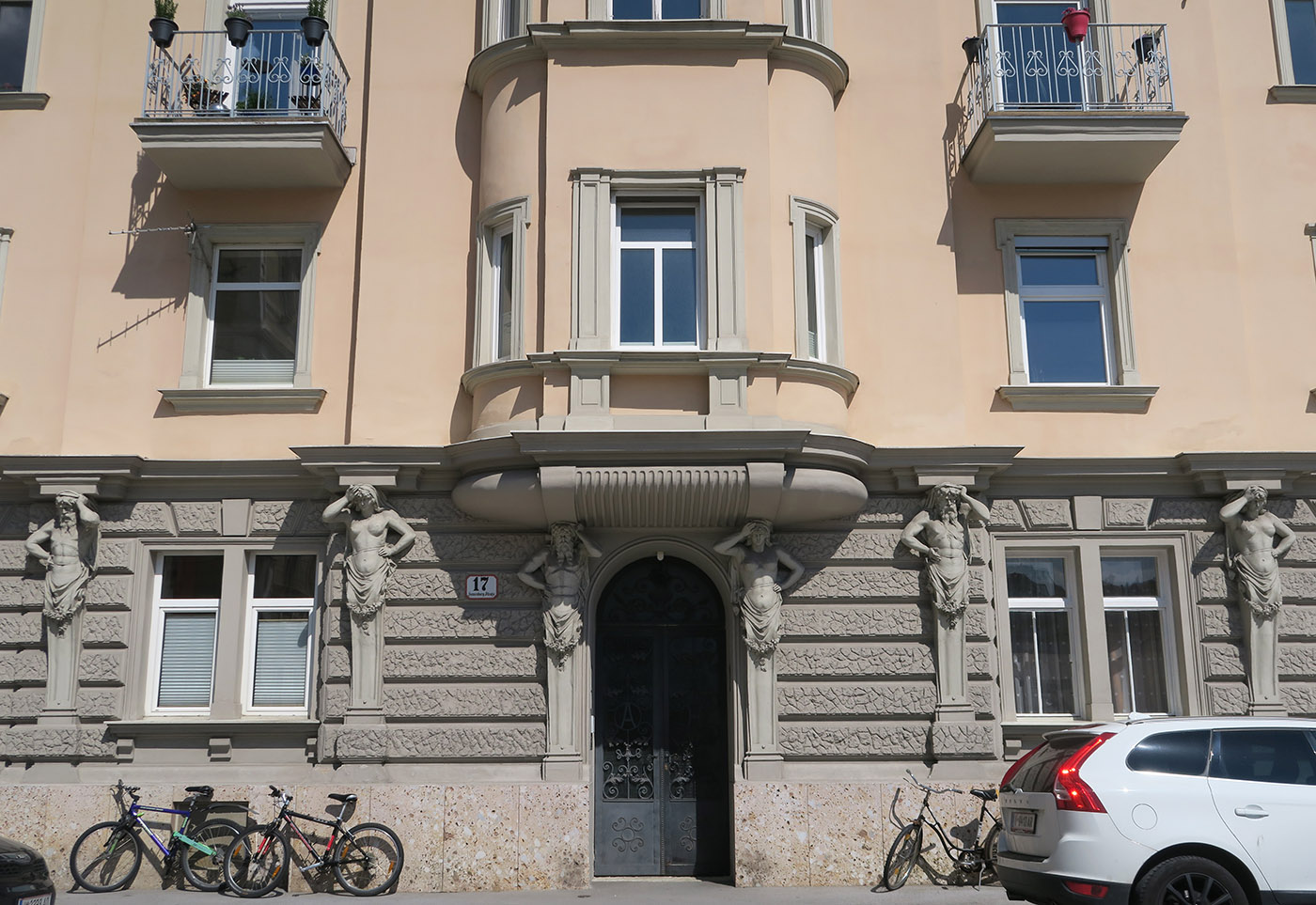 This house was completed in 1903, largely destroyed during the War and later rebuilt and extended between 1964–1966. However, the original ground floor facade and some window elements have survived. Understandably, the new facade of the upper floors is too modest to match the six prominent atlantes and the look became a bit unbalanced.

To imagine its previous glory, we can use the adjacent buildings, No. 15 and 19, as a reference, because they are actually the side wings of No.17. With such grandeur, was it really just a house for common households in a quiet street?

The fountain nearby was made in 1886 and was transferred to here from the plaza in front of the Innsbruck train station in 1905. I was so thrilled to spot it in a 1900 postcard!

The creatures on top look akin to fish but they are actually dolphins depicted in ancient Roman style. 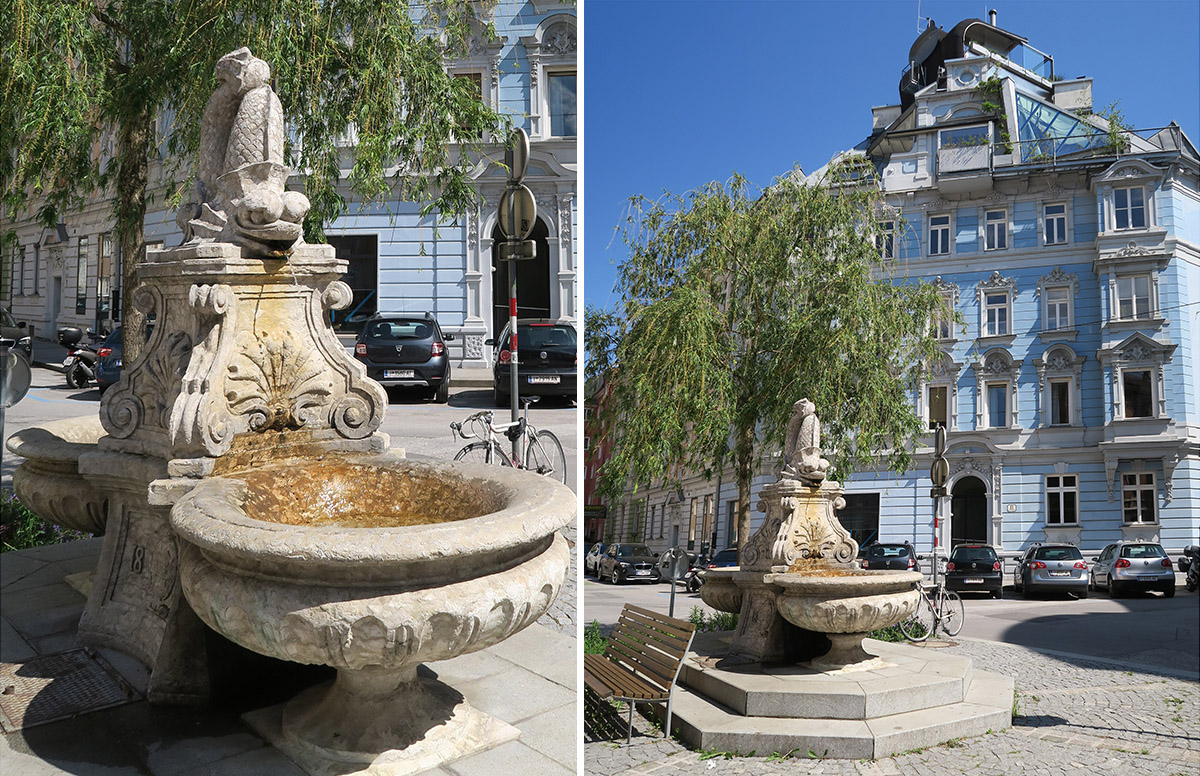 These scrapers are rather more practical than ornamental but they always catch my attention. I didn’t know such thing exists until I moved to Austria! They must be handy on snowy days. Since we are at the beginning of the walk, I would like to point out early that there are several of them in Wilten. 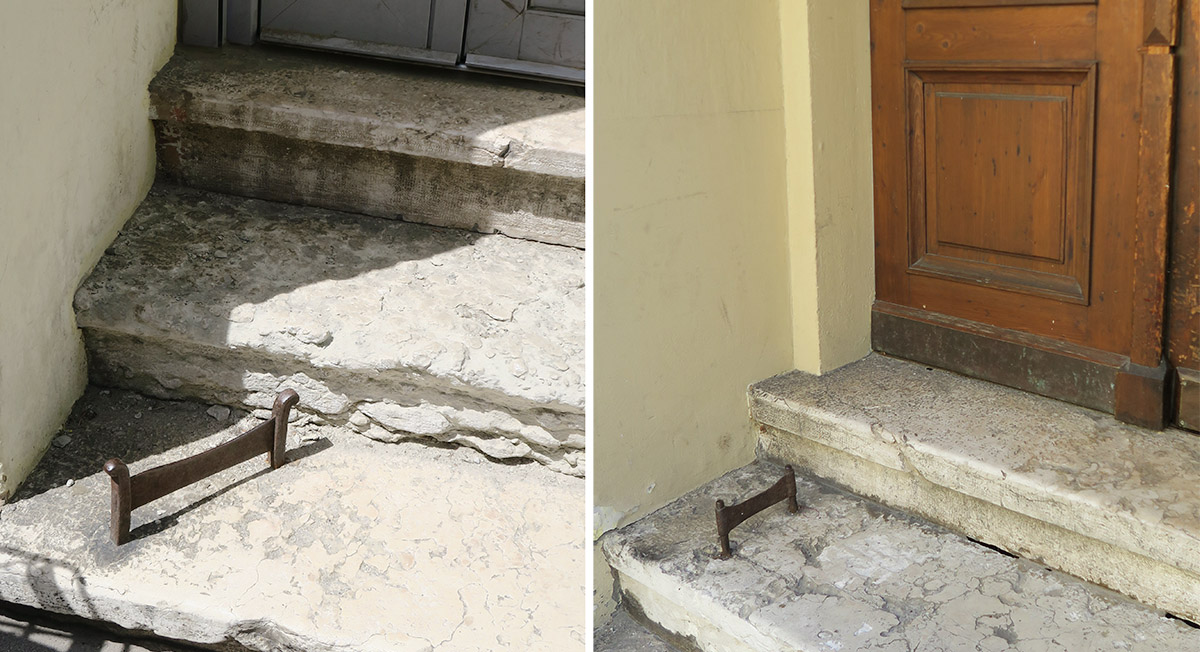 This warm and gentle portrait of “Walther von der Vogelweide” (a 12th century composer and performer of love-songs) was made by artist Maria Rehm in 1956. It is next to the 1st floor window above the restaurant Österreichische Hof. The current building was built in 1951 and its predecessor was one of the hotels which were built in the 1900s but destroyed in the WWII. 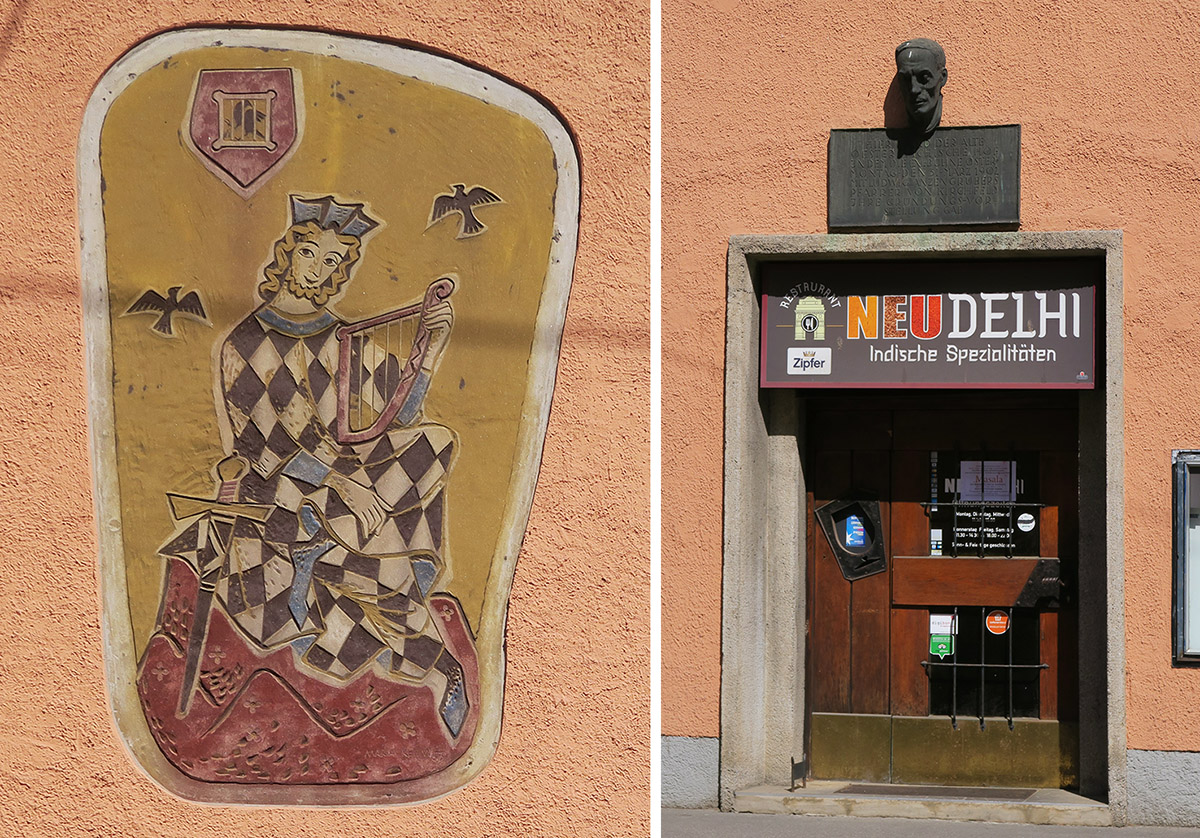 Josef Speckbacher was one of the leaders in the 18th century Tyrolean rebellion against Napoleon and this street is also named after him. The statue was made by Albin Lanner in 1941. The style does have accents of the political ideas of that time. 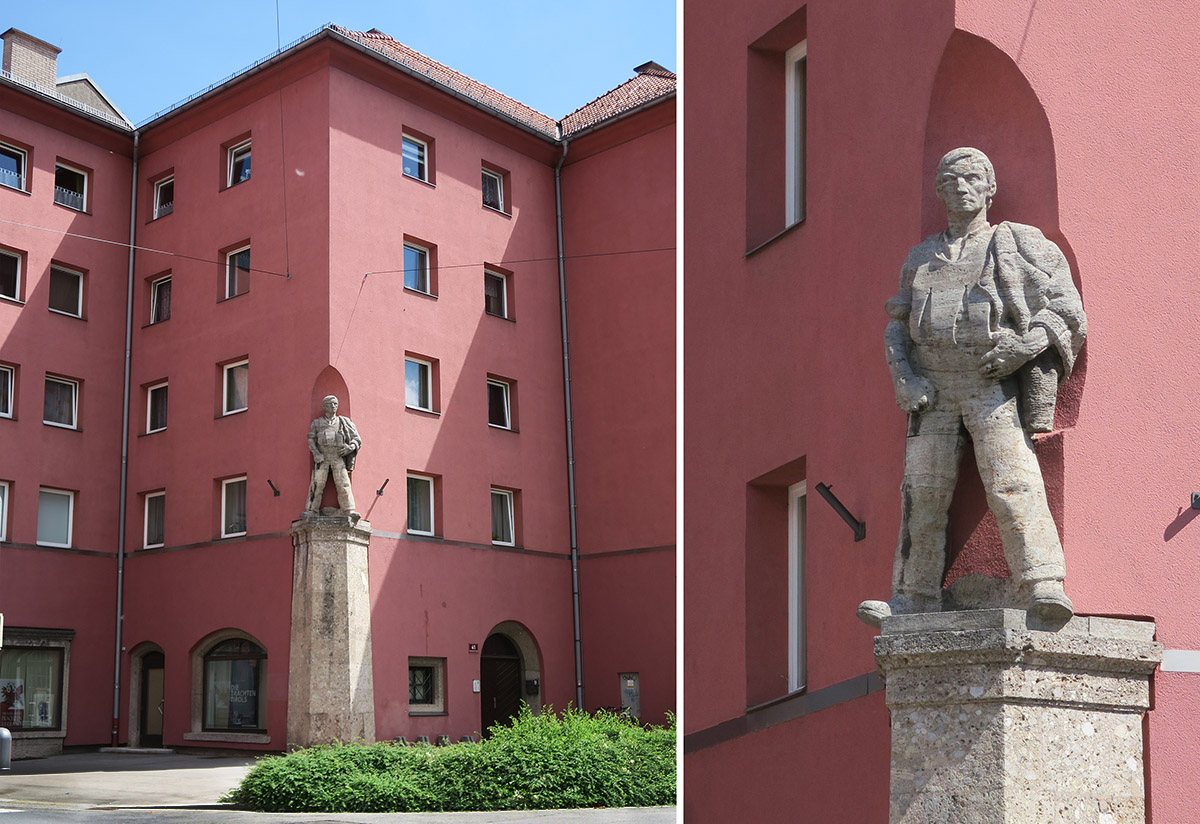 This elegant Art Nouveau house looks low-key from afar but has many elaborated details. It was built in 1907 while the building to its right, Zollerstrasse 1, was built in 1908. Both are the works of  Josef I. Retter. 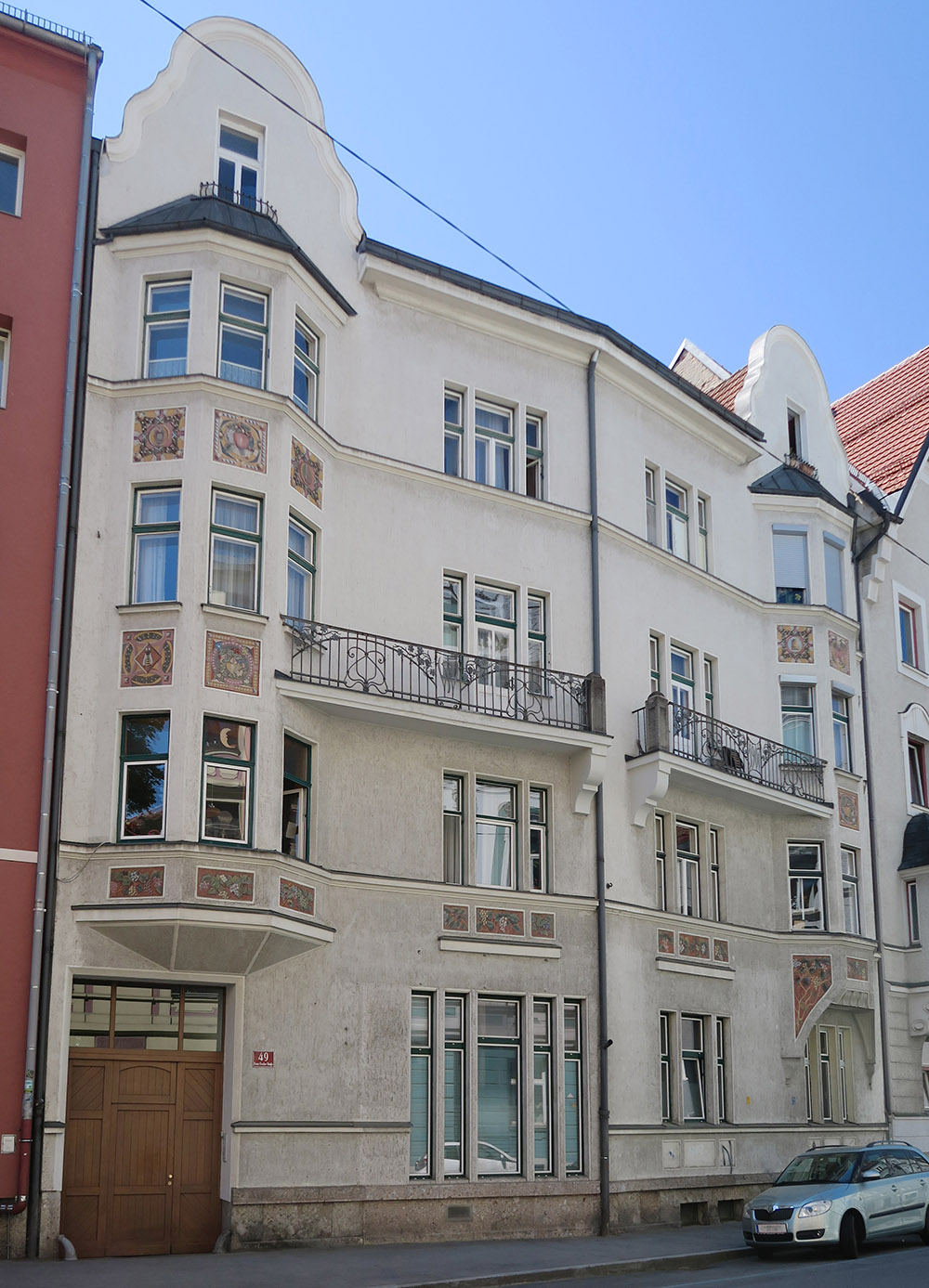 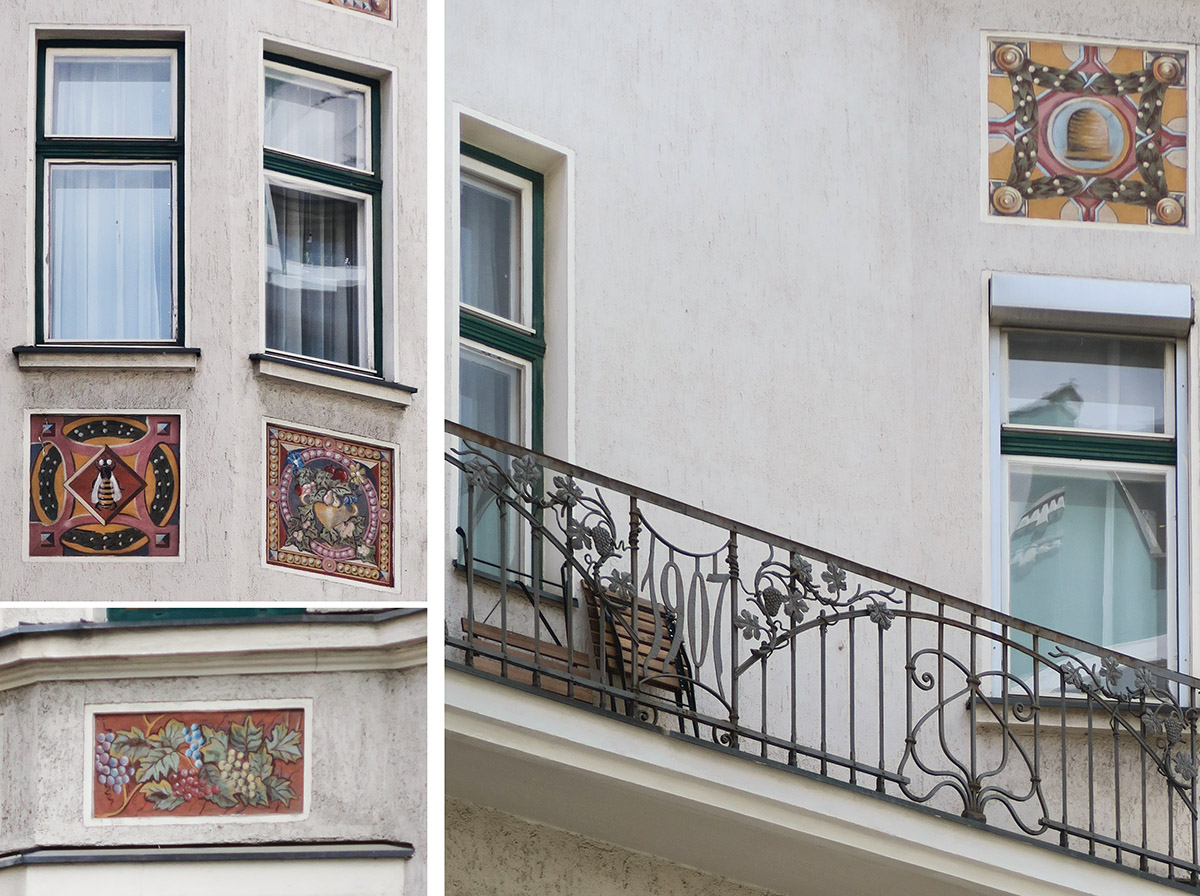 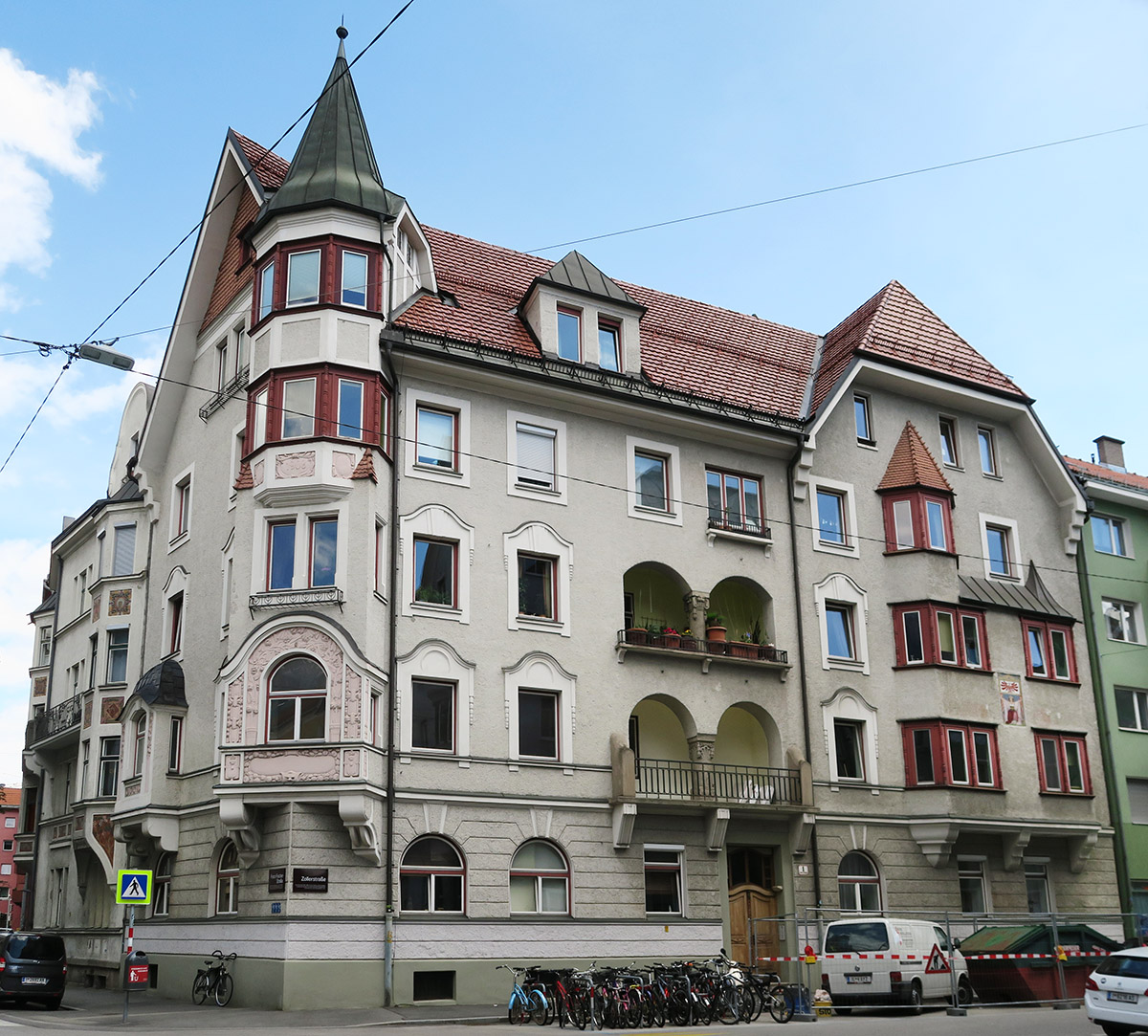 The figure in the portrait is Tyrolia, the personification of the state of Tirol. There is also a statue of her on top of the Ferdinandeum Museum. 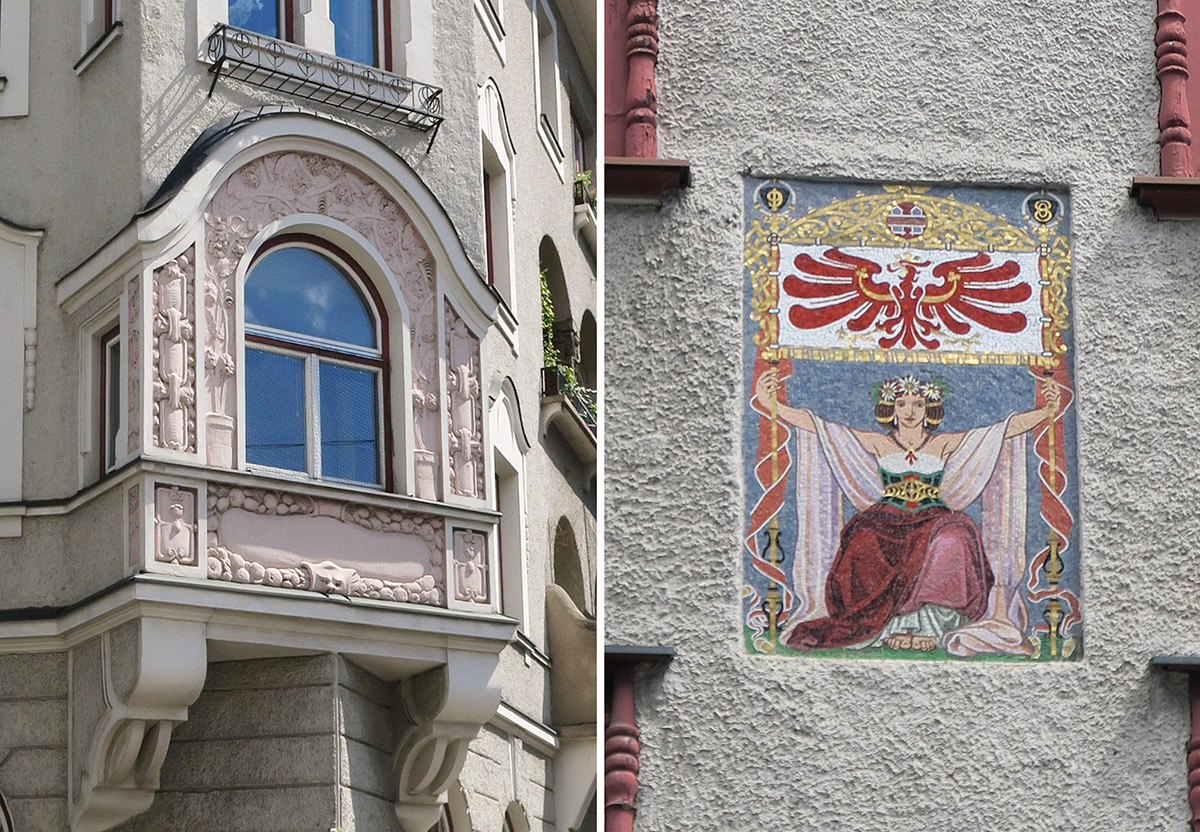 Built in 1914, this Art Nouveau building was originally a boys’ elementary school. However, right on top of the entrance, there is a stone relief of Der Struwwelpeter. Isn’t he supposed to be scary? Now the building hosts the National Educational Institute for Elementary Education. 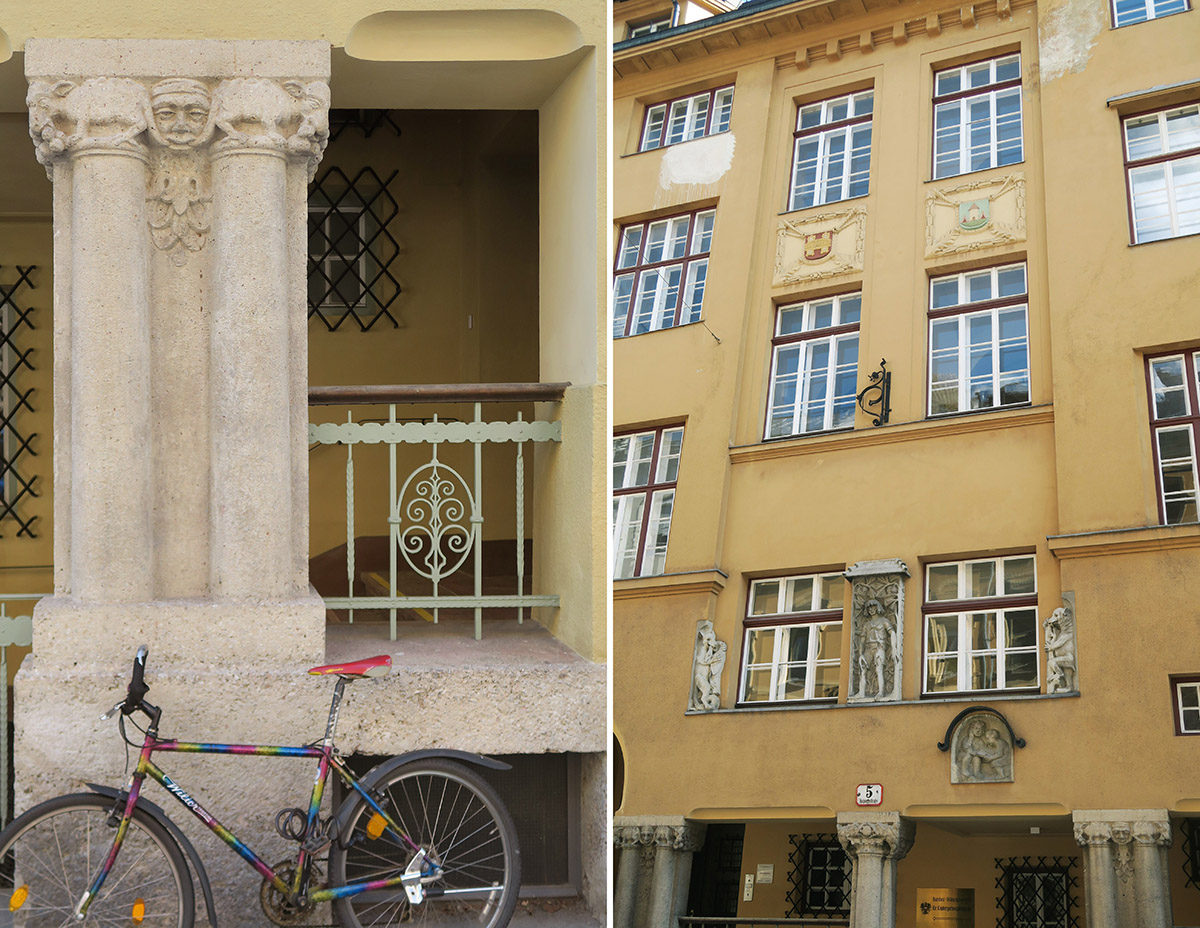 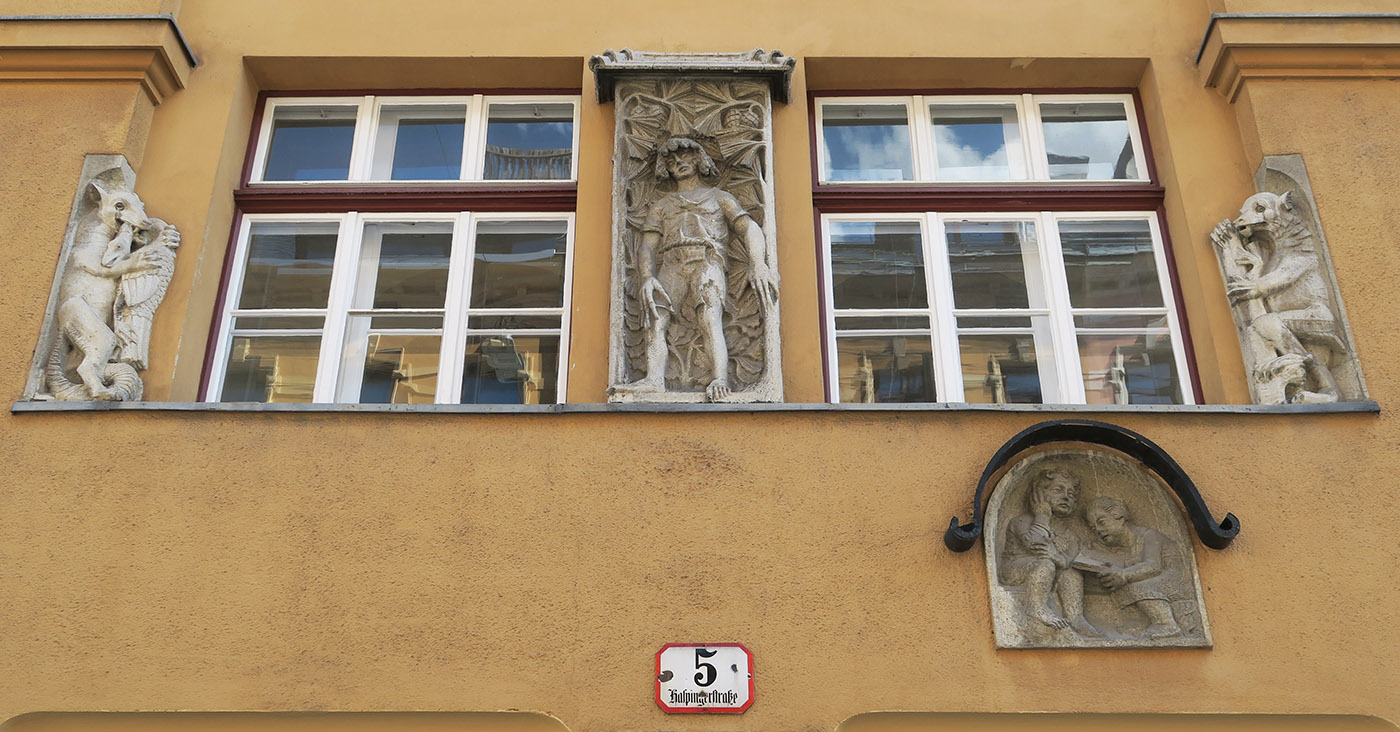 This is what happens when an architect builds a house for herself/himself: the house is gonna have best quality. Completed in 1905, this Art Nouveau residence and office combo was designed by architect Josef I. Retter and showcases his ideas and abilities. (Remember the Art Nouveau houses we visited earlier? Those are his works.) 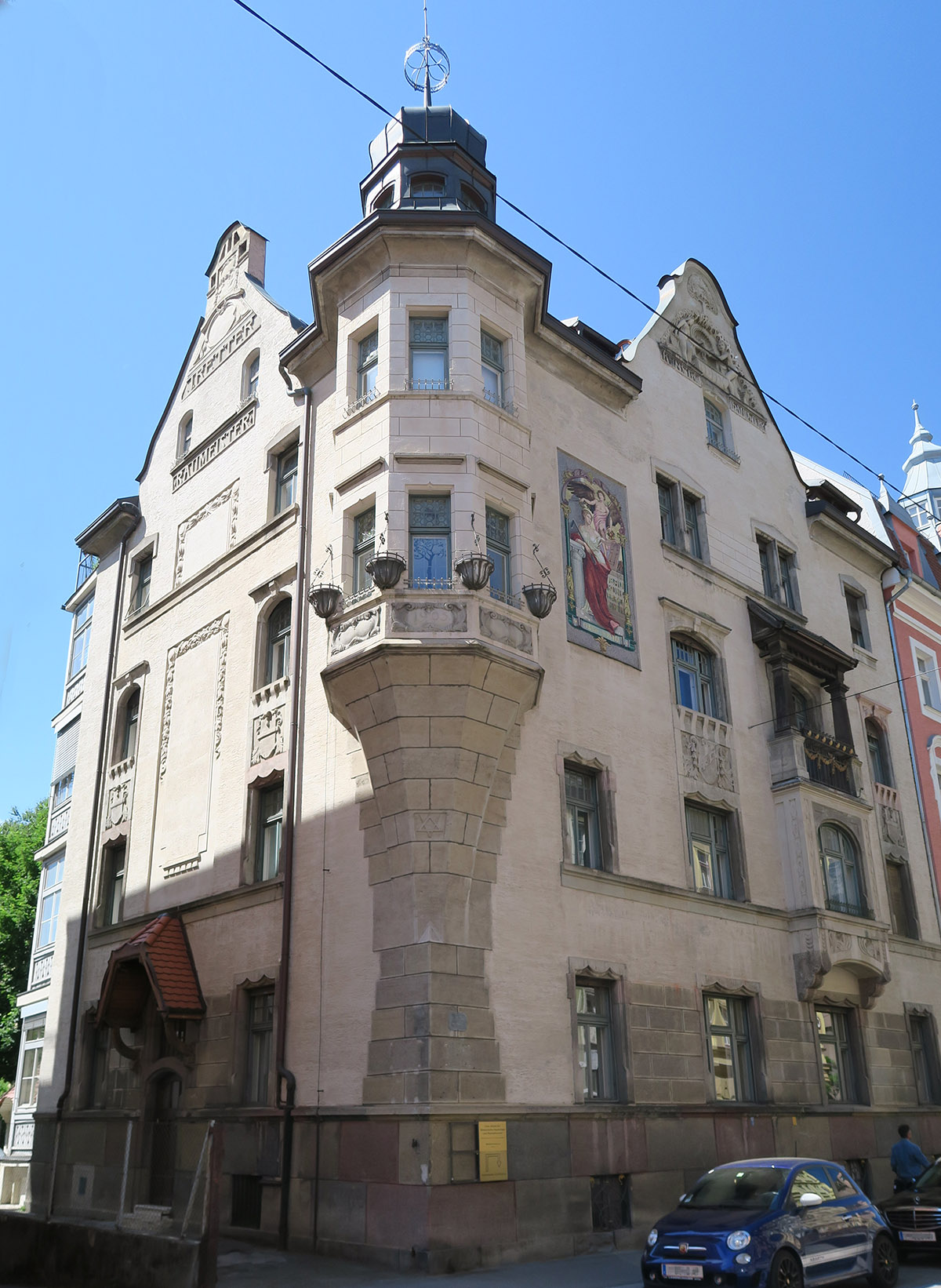 The woman in the mosaic is the personification of architecture. The objects she holds and leans onto are the hints but the text reads “Baukunst Erste Kunst (Architecture, the first art)” anyway. Hey, as an artist, I disagree! 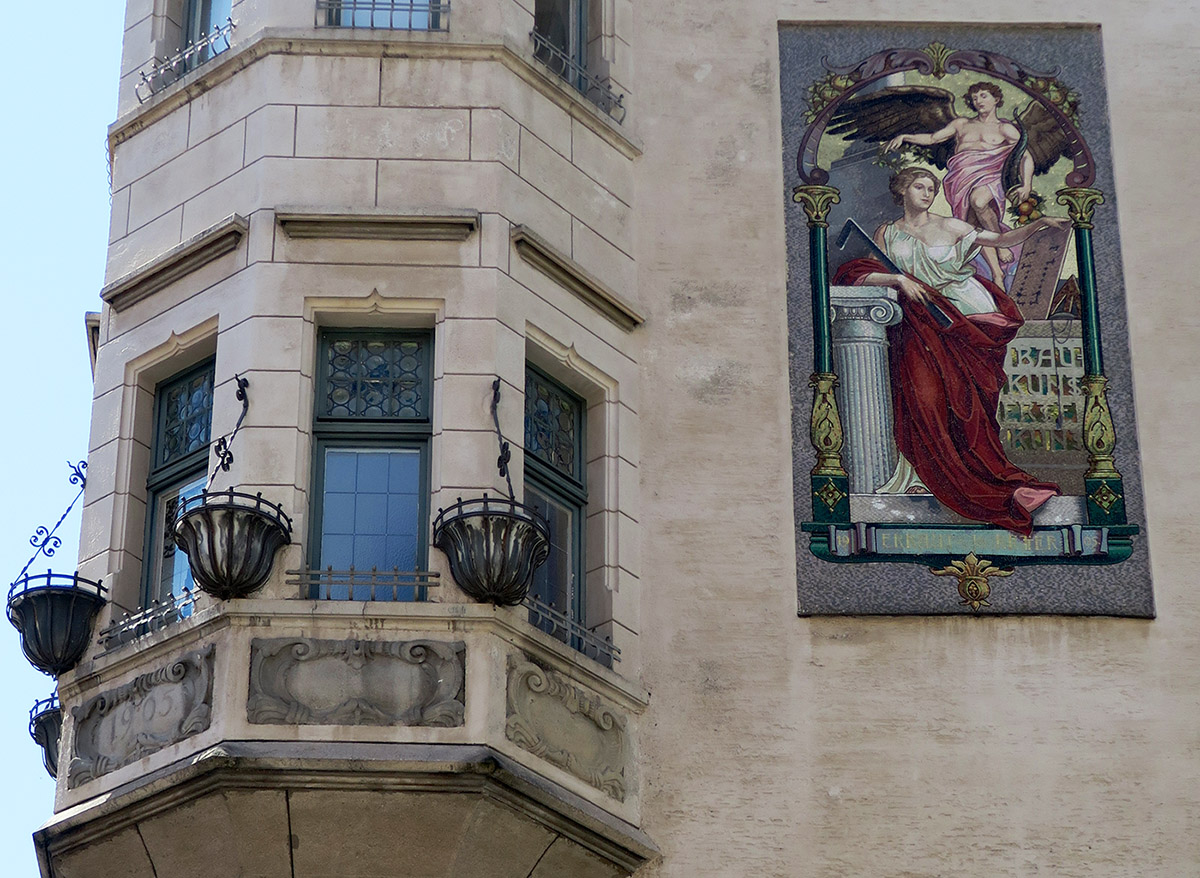 In the relief on the gable, the female represents art and the male craft. 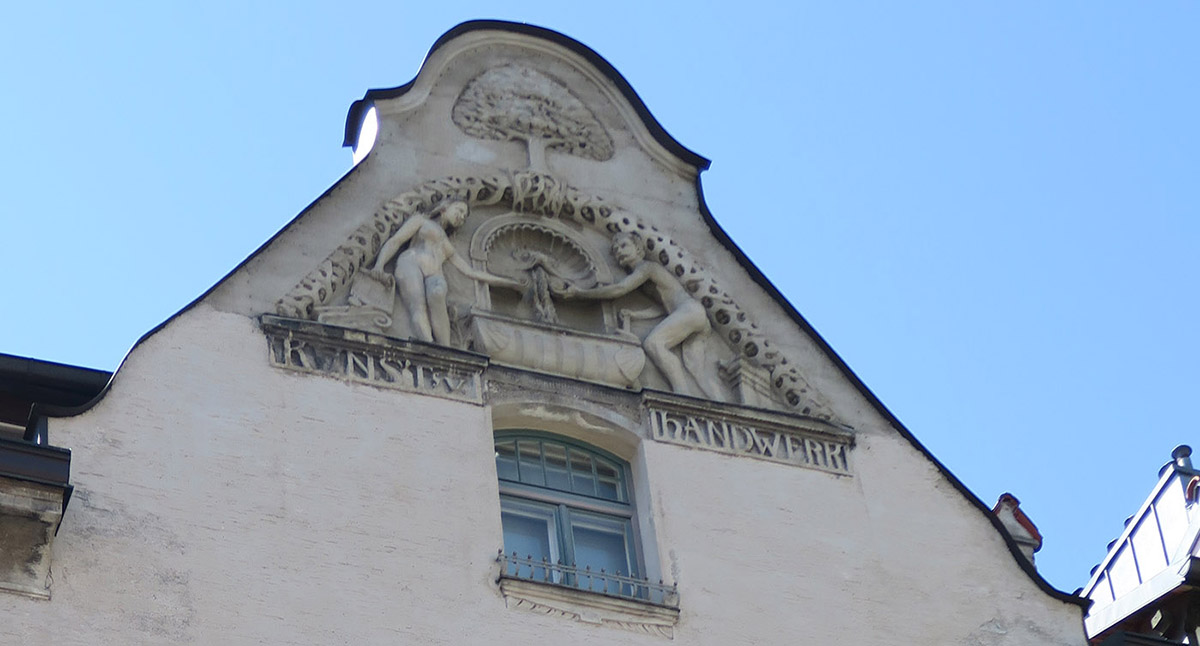 The 3.4 meter tall tail-biting steel Oroboros was made by Harald Kirchebner in 2008. It forms the gate to the MiPArt-Gallery (private property) and the offices of the Oroboros Instruments GmbH, a company dealing with science. The building to the left of the Oroboros was built in 1878 and the sculpture in front of the house was also made by Harald Kirchebner. 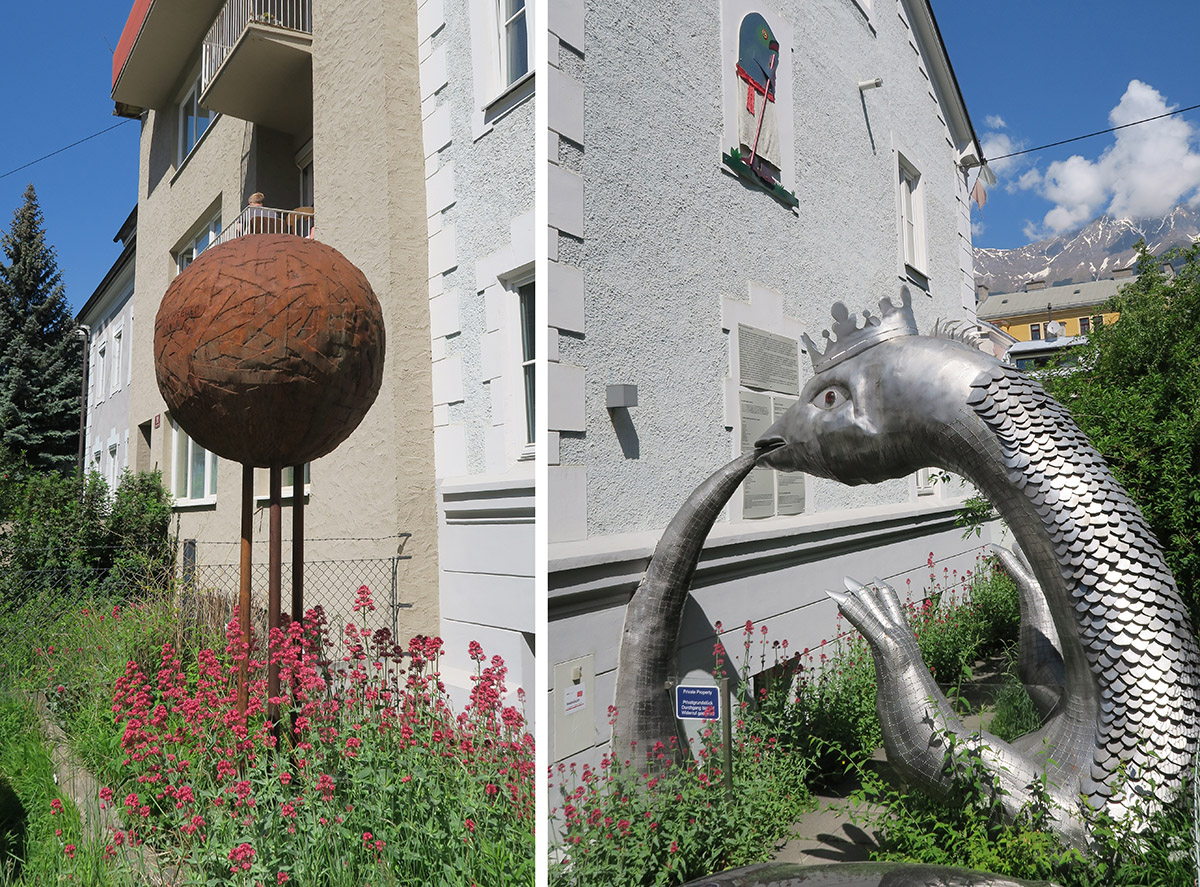 Our next stop is the northern entrance to the West Cemetery. The cemetery was built in 1856 to replace the old one and has been expanded several times. (The northern part is the oldest.) Many artworks from the 19th century enrich this place of thoughts and the arcades on both sides of the porch are impressive, too. 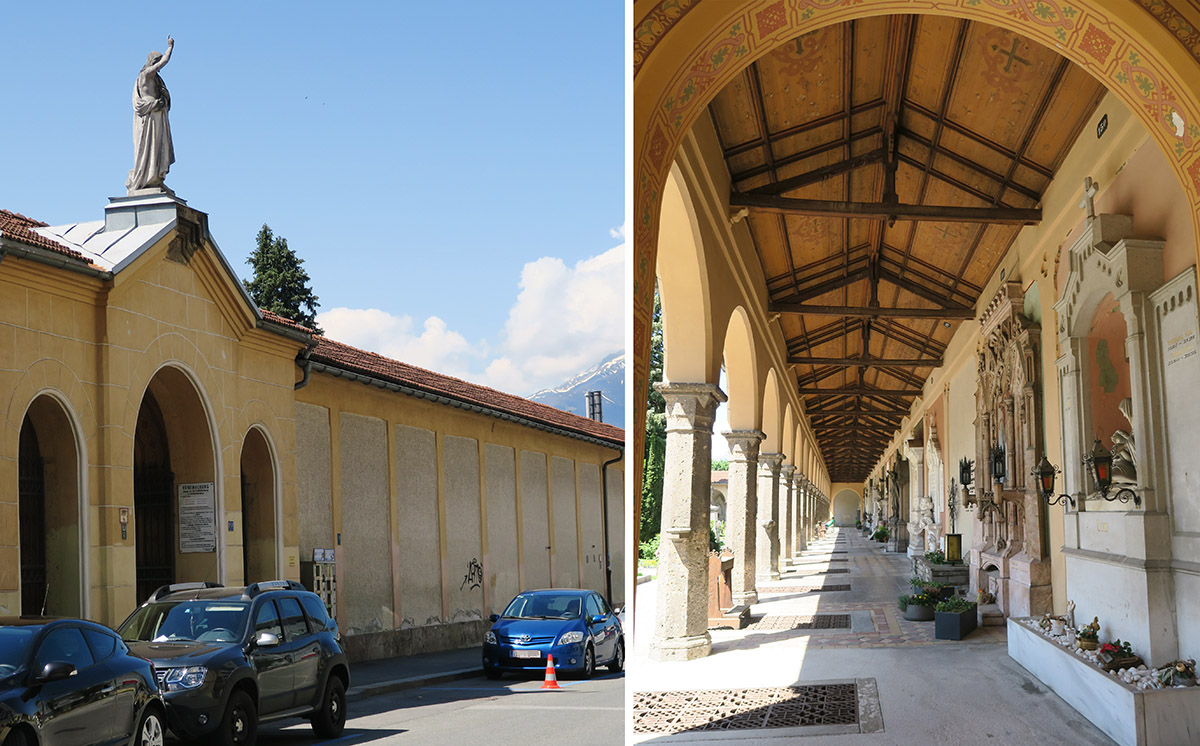 Right in front of the porch is this inspiring group sculpture which says so much about treasuring life. The 1873 memorial itself commemorates the remains from the older cemetery. 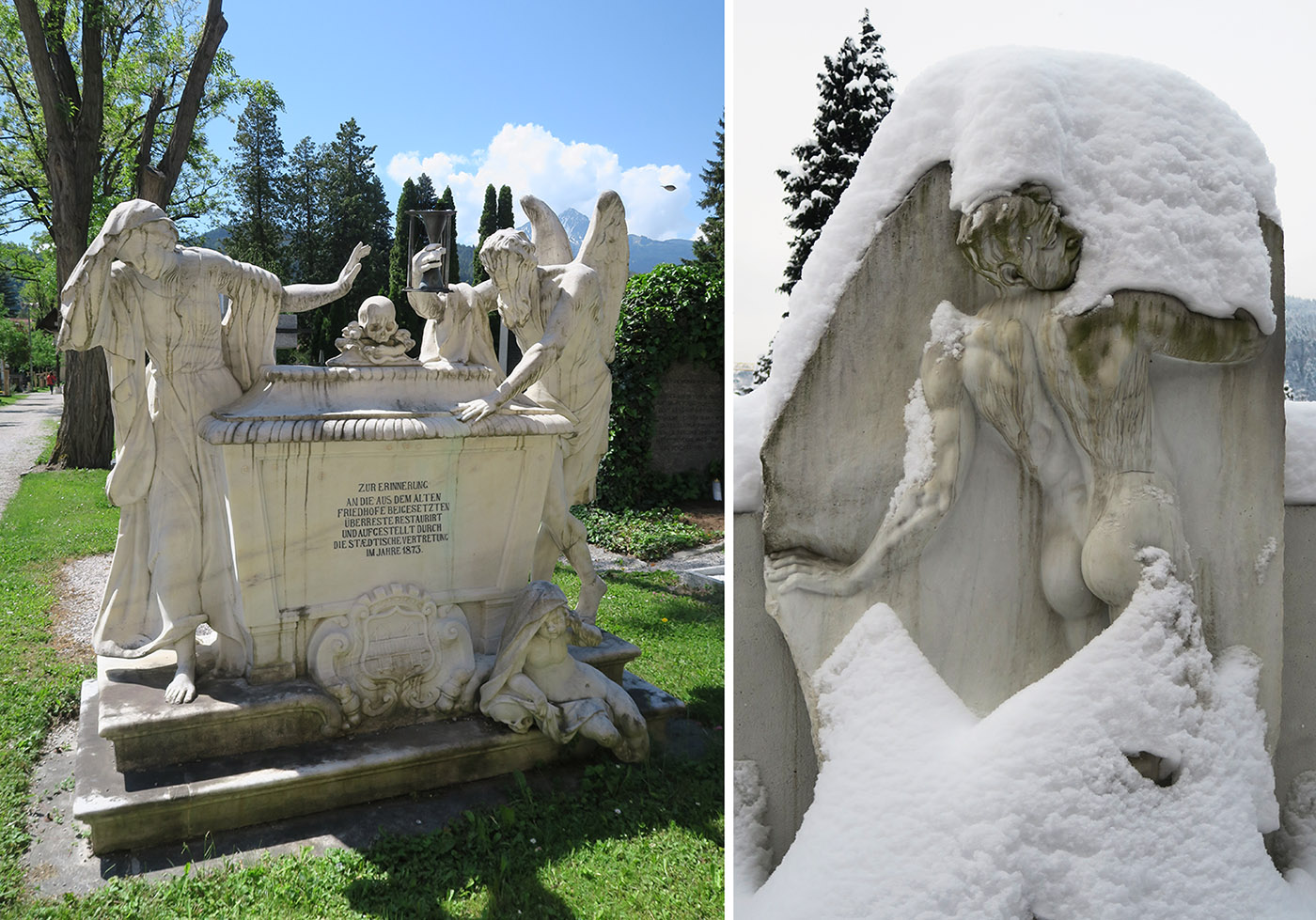 In 1949, the state government of Tirol introduced the policy “Kunst-am-Bau-Aktion” to ensure the presence of art in public buildings (similar to “Art in Architecture” or “Percent for Art” in other countries).  Several artists embraced this concept and did quite well in the 1950s. There are of course several fine examples in Innsbruck, such as the Sgraffito “Höttinger Bild” below.

The area between the West Cemetery and the road Innrain was mainly developed in the 1950s. There are four large murals in this residential block. My favorite is this wonderful “tree” Sgraffito, said to be created by Max Spielmann. 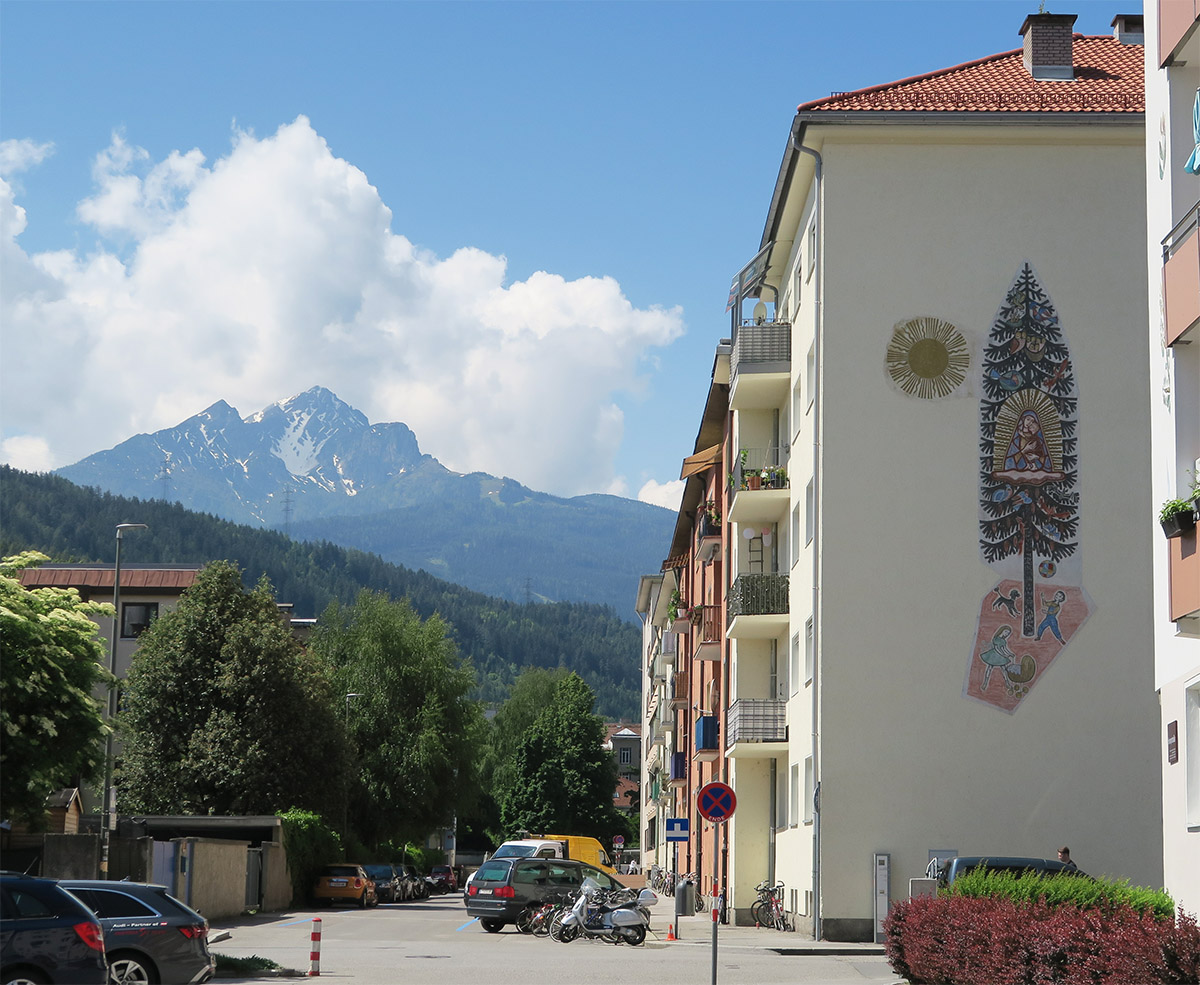 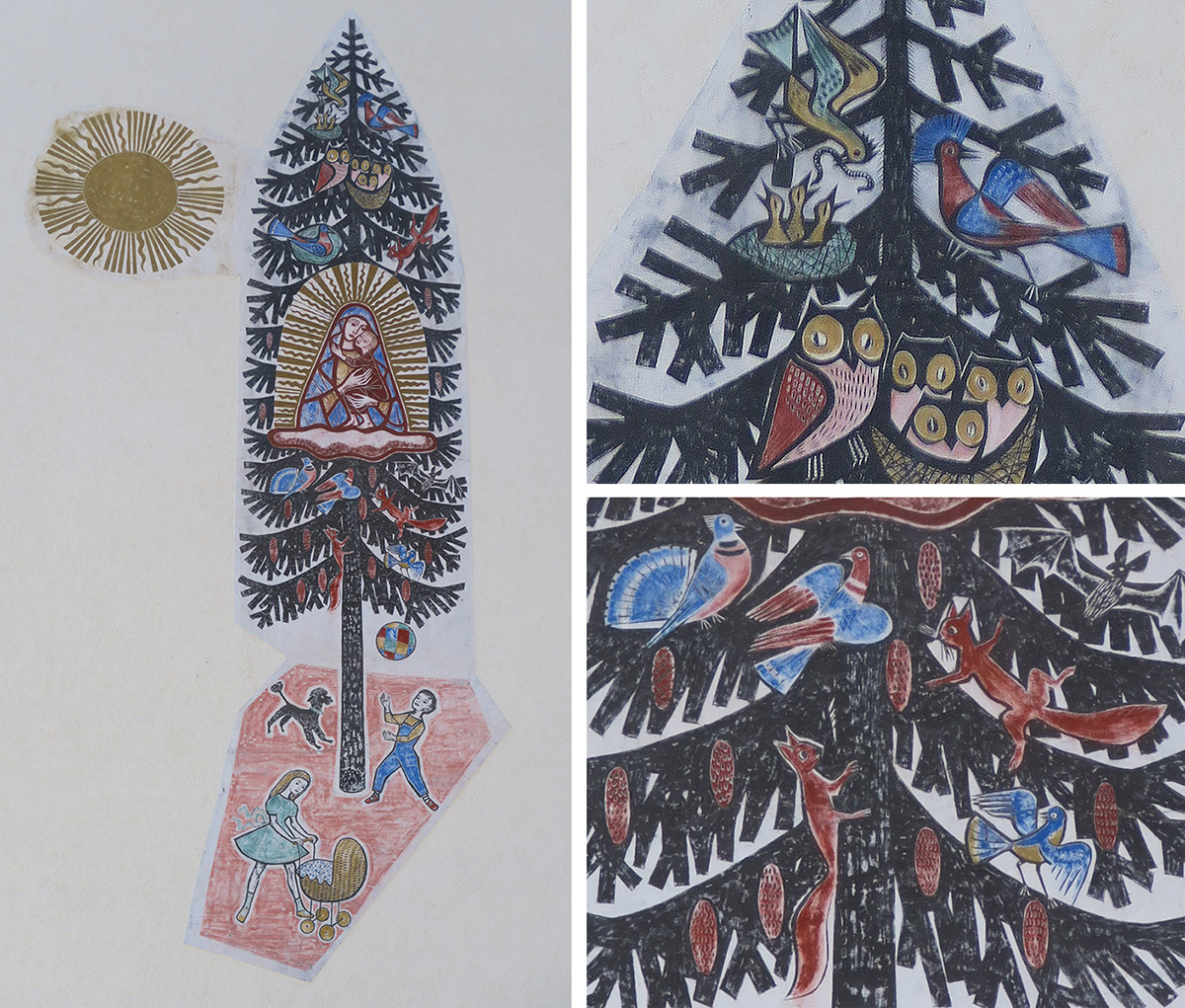 Max Spielmann (1906-1984) was a local artist who contributed many lovely works across Innsbruck. The Sgraffitos below are not included in this walk (as they are a bit further south) but the two on the right are from him.

We now reach the end of the first half of the walk and will continue in the next article. If you would like a break here, on the same street there is an independent Café using beans roasted in Innsbruck.

The purple markers in the map below are the sites shown in the article and the yellow ones are additional points of interest.