Although Innsbruck Airport is a small for an international airport compared to those such as London’s Heathrow, it has its own set of challenges nevertheless, some of which would ground those larger airports for days. We caught up with the boss of the airport’s tower, Michael Wieser, to find out what makes it special.

It requires a team of highly skilled and intelligent men and women to keep Innsbruck’s air traffic (40,000 flights per year – half of them commercial) flowing safely and efficiently. “It’s like a game of chess” Michael Wieser, Chief Air Traffic Controller, tells us with great pride and a confident smile.

The tower is active between 6am-11pm every day. Five people throughout the day on 11 hour shifts, and on busy days there can be up to five working simultaneously, such as on a Saturday with good weather. “Everyone wants to fly”, Michael explains to us, and it falls to Austro Control to coordinate the movements of all aircraft safely. 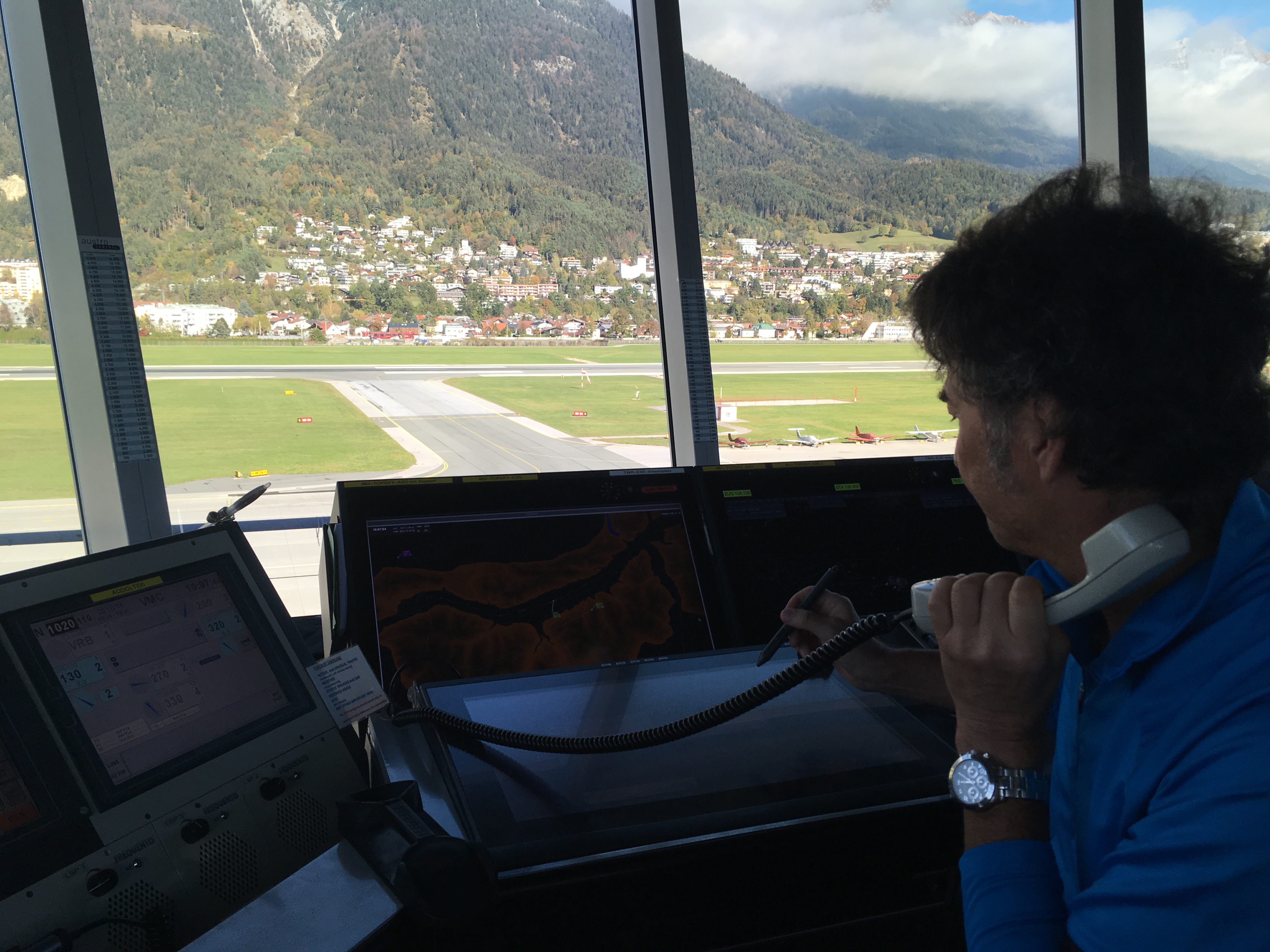 Michael Wieser in communication with a private jet coming into land.

Innsbruck’s mountainous terrain means that pilots landing into and taking off from Innsbruck need a special addition to their pilot licence.  They need to know how to deal with the high and narrow obstacles and weather conditions that are unique to alpine airports, and which make landing in Innsbruck one of the most spectacular landings in the world:

There are two major problems they deal with: low cloud/high fog, and wind.

Innsbruck has strong wind from the north which causes down drafts from the mountains, but it’s the wind from the other direction that can cause real problems. The southern föhn wind passes and turns over the city, which can cause high turbulence and a no-go for safe landings. Michael and his team assess this and have planes land on runway 08, which runs from west to east (towards the city), where turbulence is at a minimum. 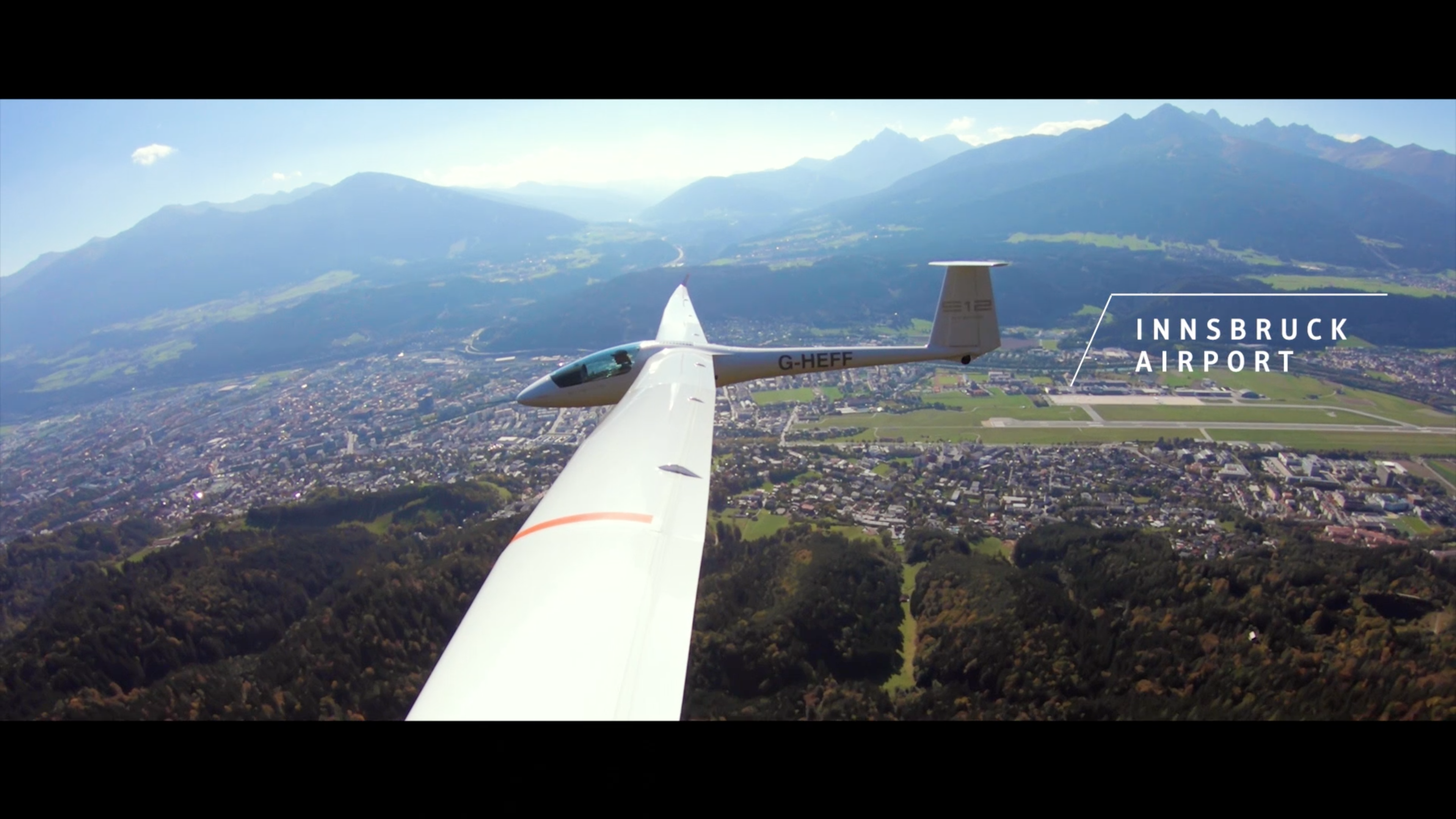 How does Innsbruck Airport deal with Snow?

Heavy snow fall is also a problem, but more manageable. They have a very good snow clearance crew with six vehicles that drive together in unison. Within eight minutes they can clear the entire runway ready for landing. Basically, during snowfall, the runway at Innsbruck Airport doesn’t close like at other airports – it’s just on a break for eight minutes while it’s cleared, then landings can continue three minutes after. 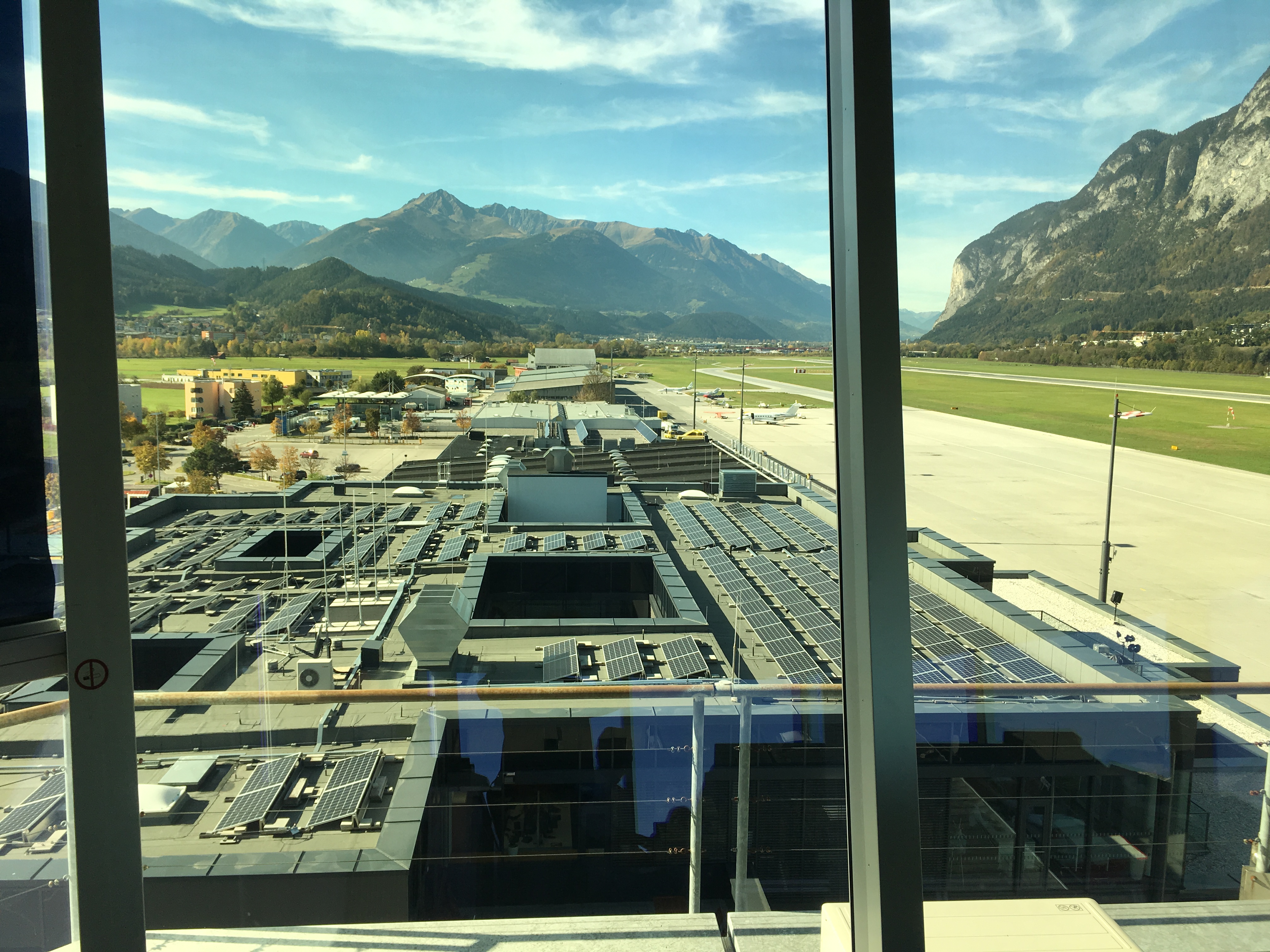 Innsbruck Airspace (Innsbruck Approach) is a strip of airspace between Hochkonig in the east and Voralberg in the West with a height of 5,500 metres. The airspace above that height is controlled by Munich Airport.

There are many different types of aircraft, not only those that operate to and from the airport such as the commercial airlines and private jets, but also plenty of other others that fly within the restricted area. Gliders, paragliders, helicopters, drones and more have to all be managed by Michael and his team.

I know this well because I often fly my drone within the restricted area and every time I do this, I need prior permission from Michael at the Airport Tower plus Austro Control, then I need to call them before I take off and after landing so that they have full knowledge of what I’m doing, and thus have more control of the area. 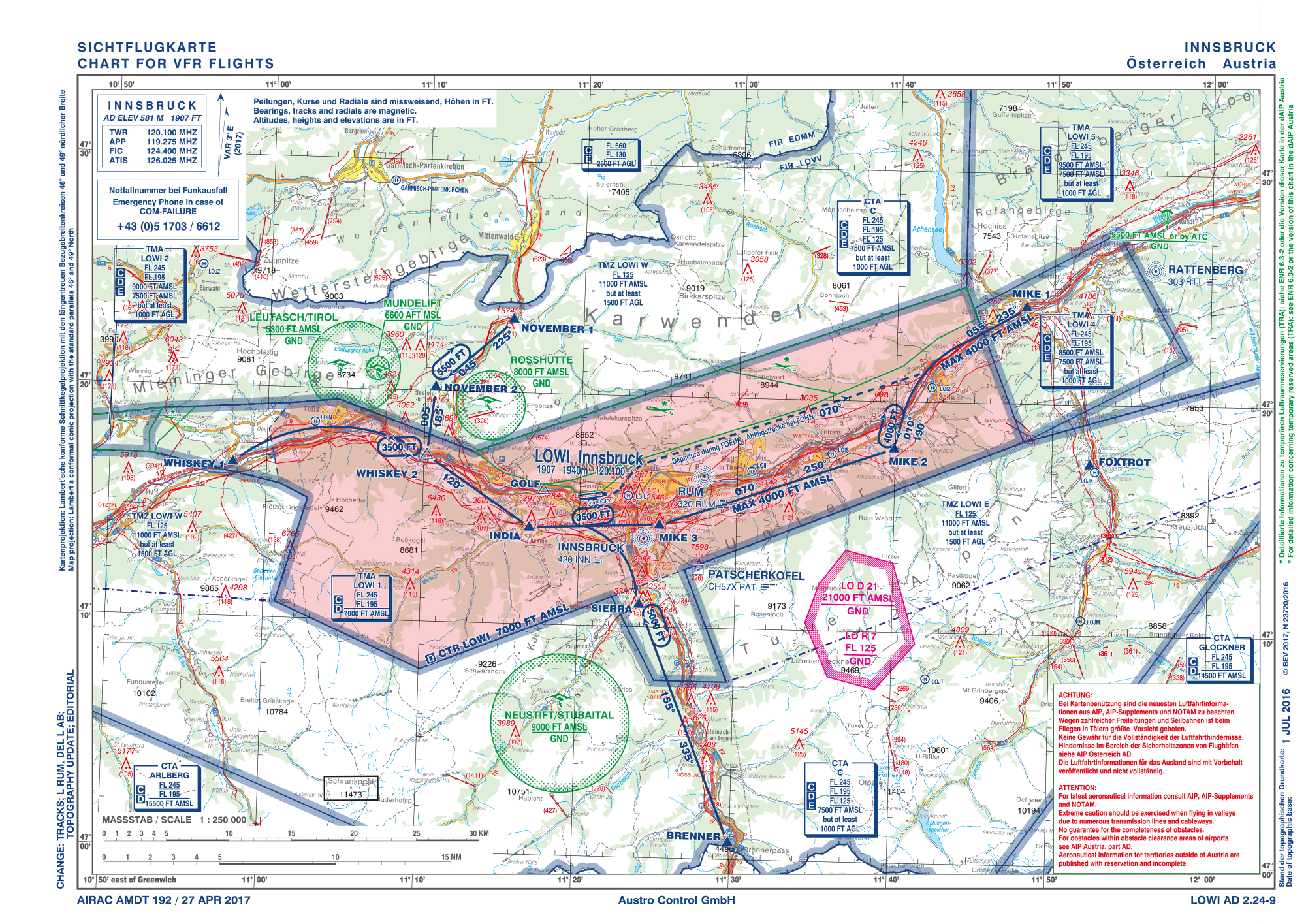 Innsbruck Airport was the first to use a brand new radar system, which works with transponders that calculate the exact position of aircraft in the region. In a mountainous area, traditional radar has problems with the radar signals reflecting and bouncing off the rocks, making it unreliable. The new system doesn’t have this problem and is more precise. 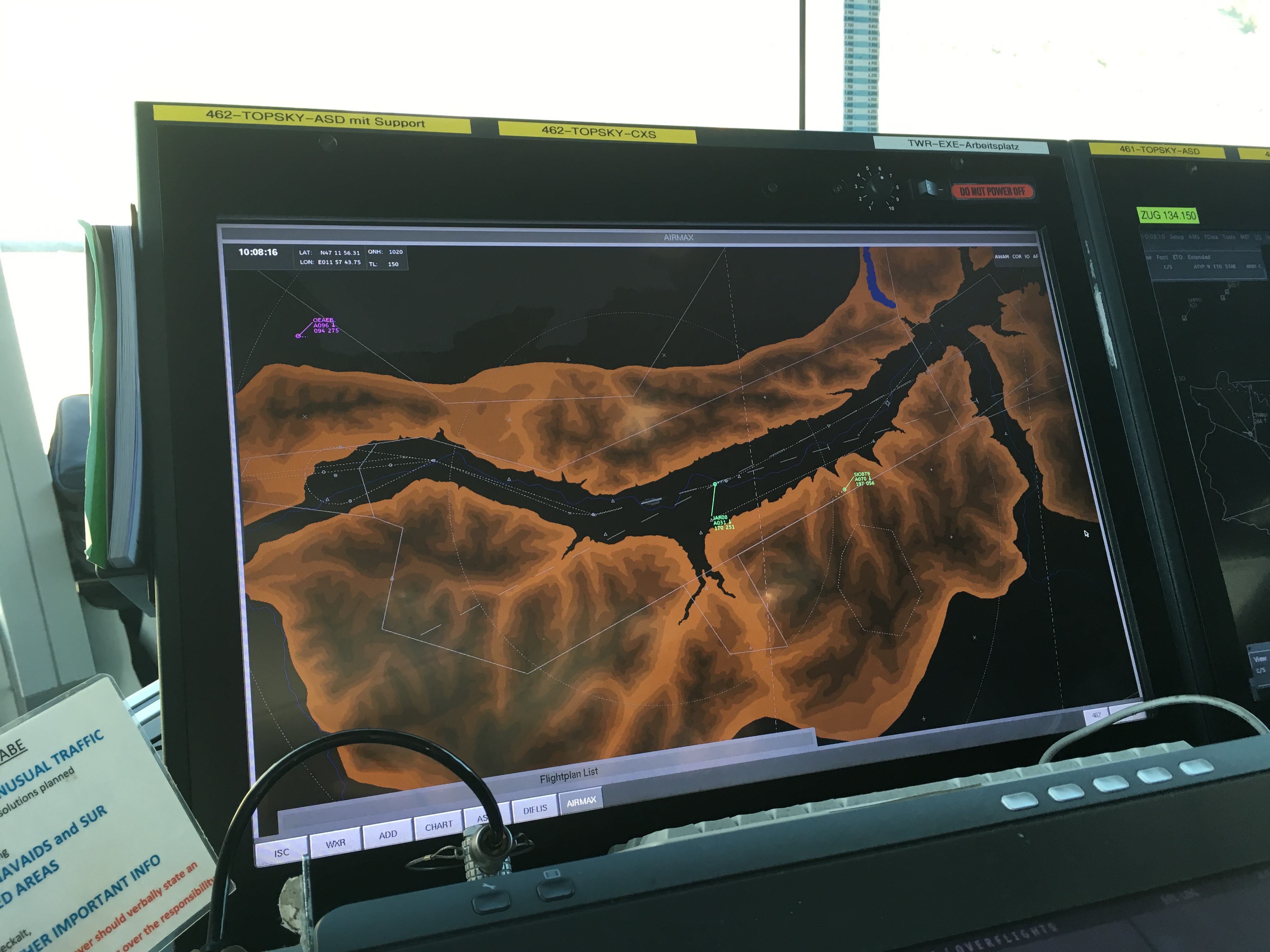 To wrap up, Michael tells us that Innsbruck is a great place to learn to fly, because you learn the difficulties of flying in a mountainous area right from the start. Many pilots who have trained here have gone on to have high positions in companies such as Air China, Emirates, and Virgin. 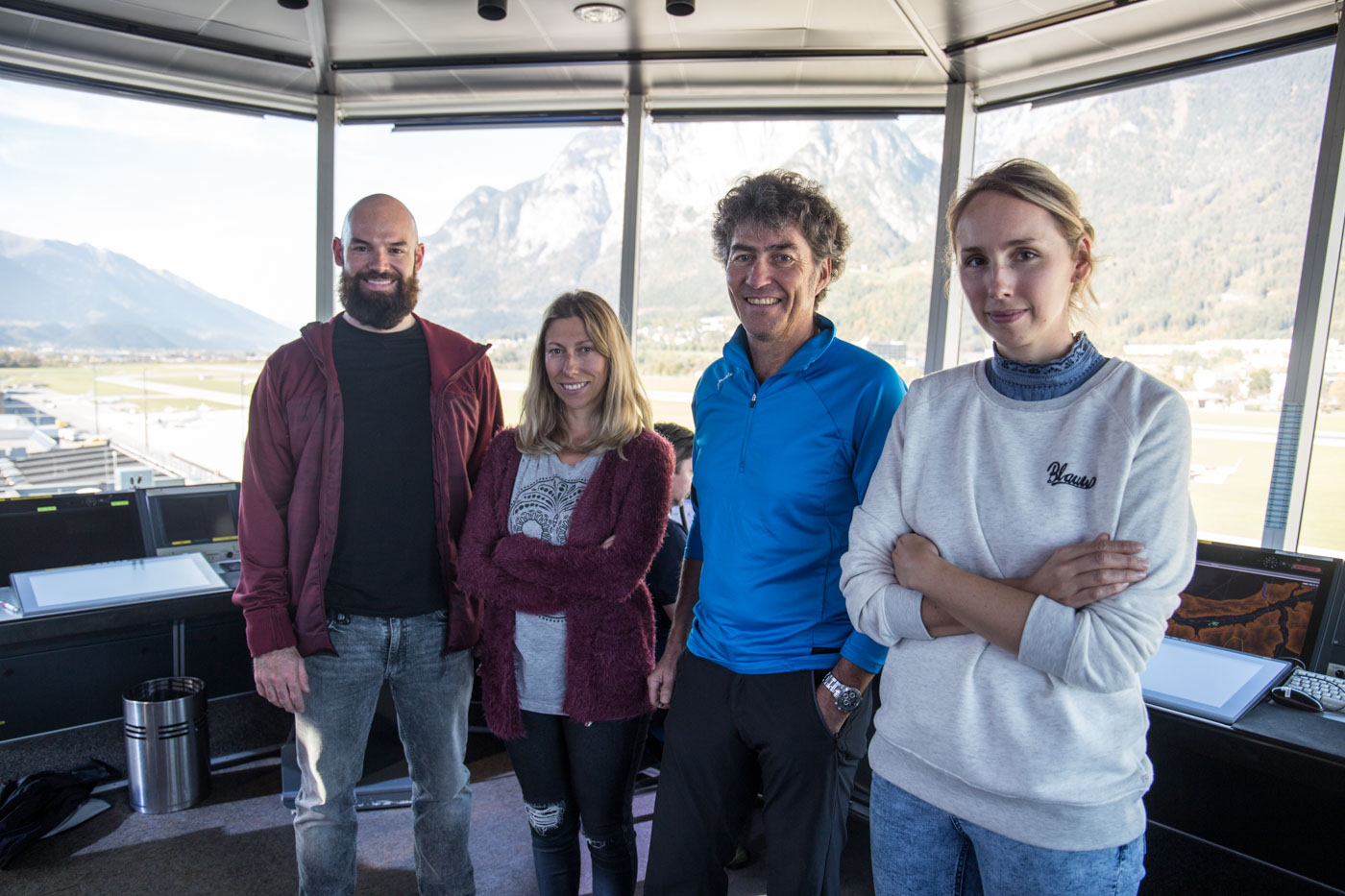 Michael loves his job, he loves the challenge and he loves the instant feedback. When a plane lands and takes off, it feels like an instant success, every time.

There are also some events happening at the airport. For example, the day after we met Michael and the team, there was the “Flughafenfest” (airport festival). Fellow blogger Danijel Jovanovic captured fantastic photos of the event in his article.