The Klammsteig in Telfs including a staircase through the bare rock

In Tyrol we like to talk about being able to be in free, even wild nature within a few minutes. Whenever we want. I maintain that this is not an exaggeration at all. And if you don’t believe it, you can put it to the test in Telfs. There, within a few minutes’ walk, you are immersed in a fairytale landscape with a wonderfully rushing stream. The Klammsteig has been open again since May of this year. And how!

Leave the hustle and bustle behind you in no time

The starting point is the car park at Aluwelten Thöni in Telfs. The village can be reached by bus using the excellent public transport system in Telfs: Südtirolersiedlung bus stop. If you set off from here like I did, you will reach a place called “Hex” in five minutes. Then I cross a bridge over the Griesbach and the hustle and bustle of daily life is already behind me. And now I walk along a beautiful path between abruptly rising limestone rocks towards the gorge. Only the brook rushes, gurgles and gurgles. 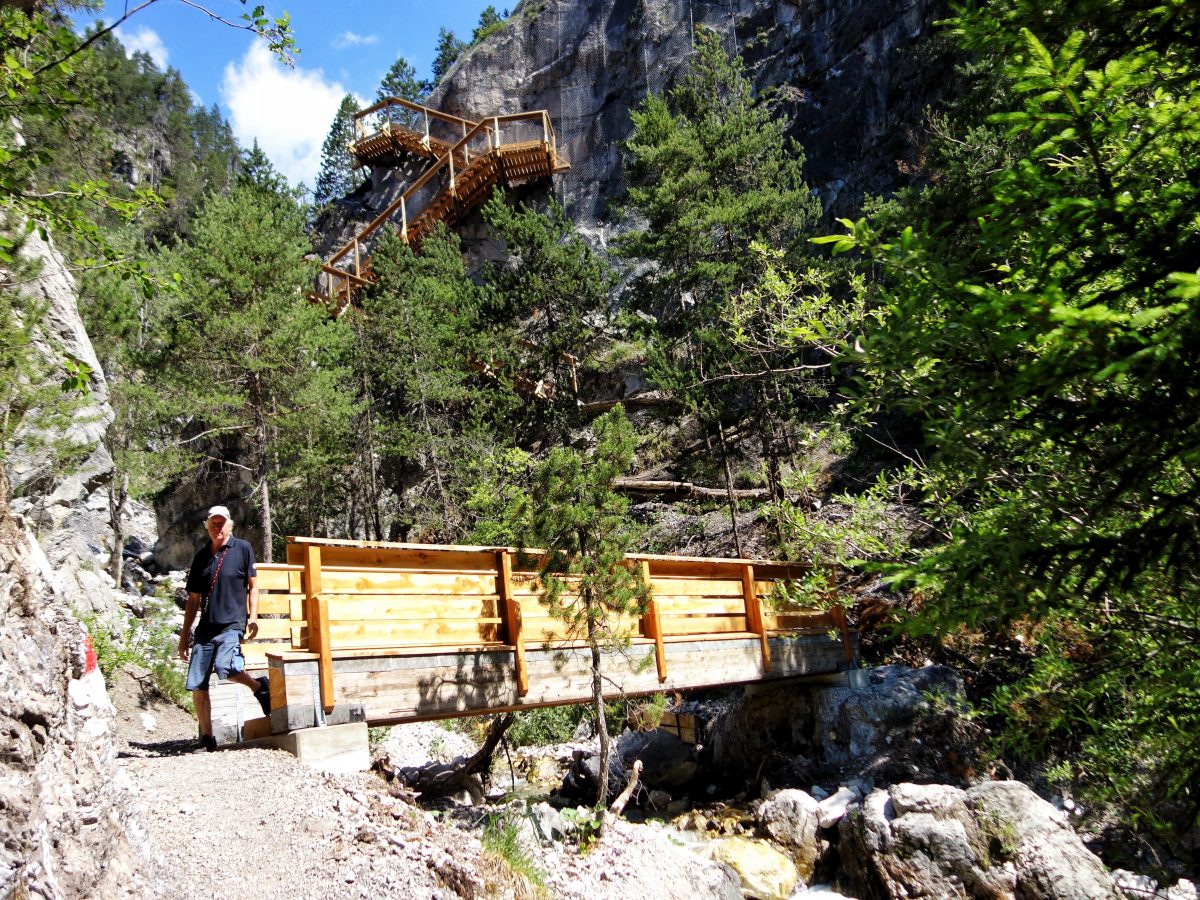 A new bridge over the Griesbach leads to the daring stairway construction.

When in 2014 a rockfall had relocated the popular gorge path through the Zimmerbergklamm and to make matters worse in 2016 a flood combined with a mudflow had swept away two bridges, the Klammsteig seemed to be at an end. Far from it. Because the people of Telfer couldn’t and wouldn’t let that happen to them. Plans were made to find a safe way around the rockfall. The result is impressive. Since this year the ‘new’ Klammsteig is one of the absolute hiking attractions in the Oberland for young and old. The path has a real highlight: the wooden path through bare rock.

I couldn’t imagine how a path could be built through a vertically sloping wall. But modern technology and the knowledge of many specialists makes it possible. And, even more important: The Klammsteig is even passable for families with children. This was impressively demonstrated by three little boys who, together with their parents, completed the path and climb with flying colours. For the little ones it was an adventure trip in a class of its own. 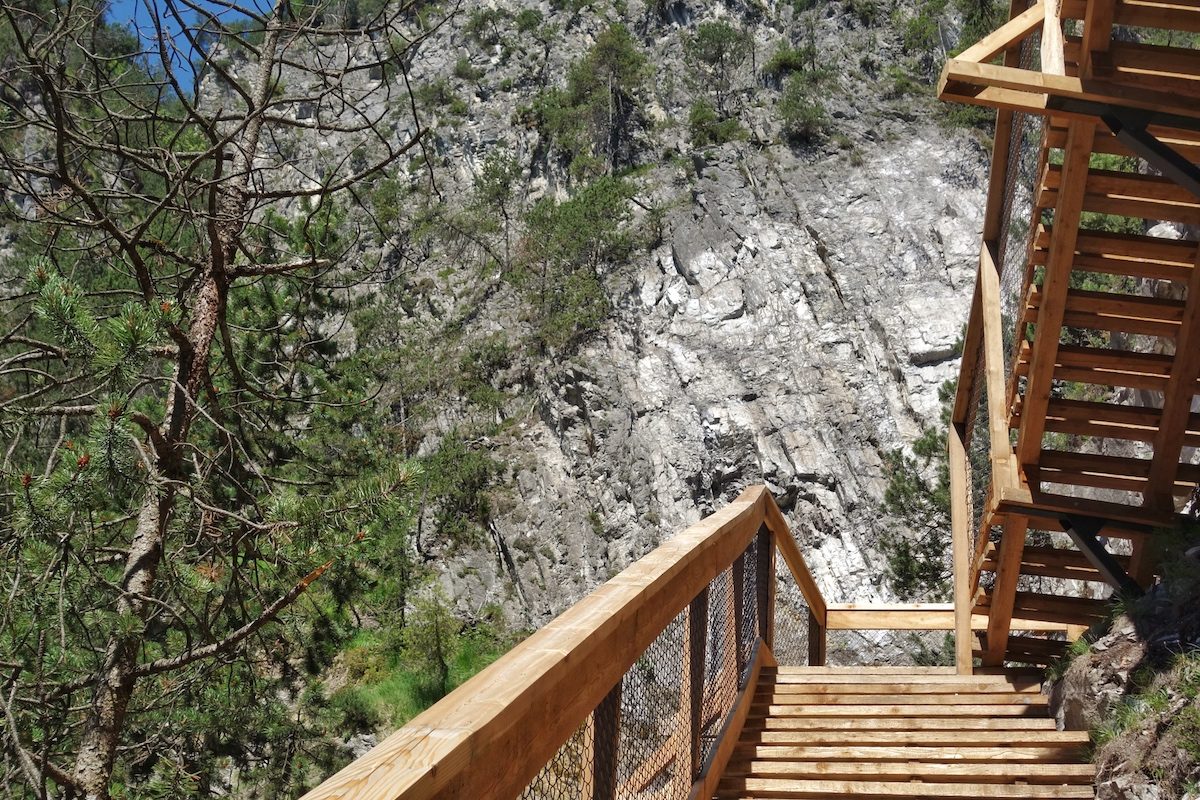 The construction of the staircase is deeply anchored in the rock.

After climbing the rock face, it’s a rather leisurely walk. But now another little adventure is waiting: now the steel suspension bridge has to be overcome. A real adventure, especially for children. But also for adults, who sometimes feel goose bumps on the mostly slightly swaying bridge. A last ascent finally brings the hikers to a forest road which ‘ends’ a few hundred metres later at the Strassberg inn.

The steel suspension bridge over the Griesbach river

For hikers in good shape, the Strassberghaus at 1,184 metres above sea level is at most a stopover on the way to the Neue Alpl-Haus at 1,504 metres. Those who dare the somewhat steep ascent to the Alplhaus will be rewarded with a wonderful view. Not to mention the fact that you are now really close to the limestone giants of the Mieminger mountains. 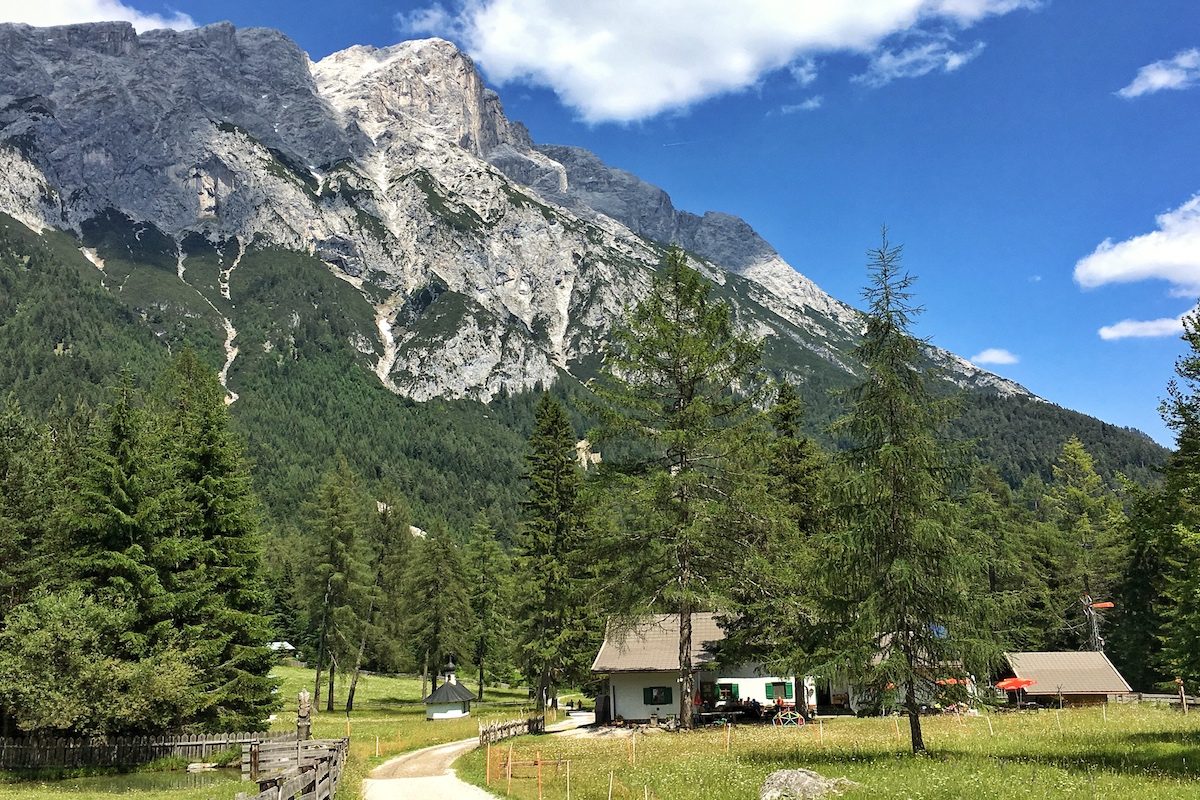 The Strassberghaus with the boldly towering Hohe Munde in the background. 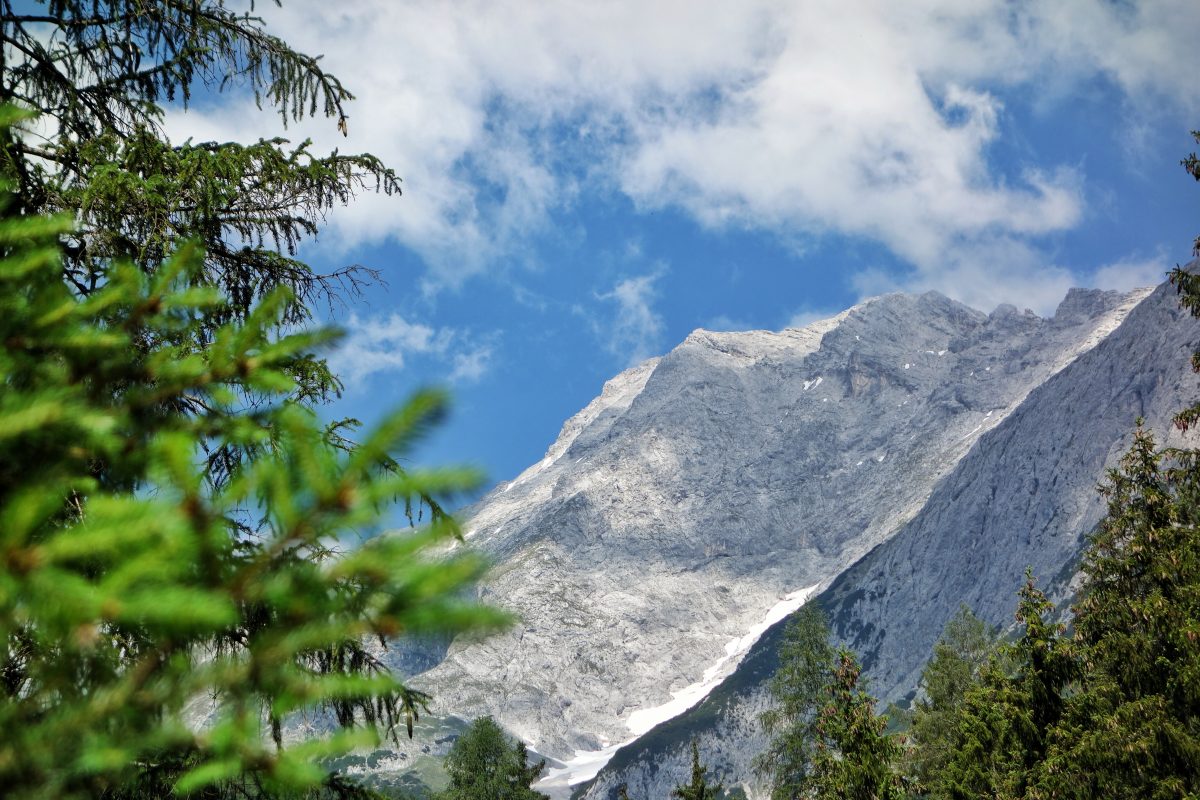 The towering limestone giants of the Mieminger chain. 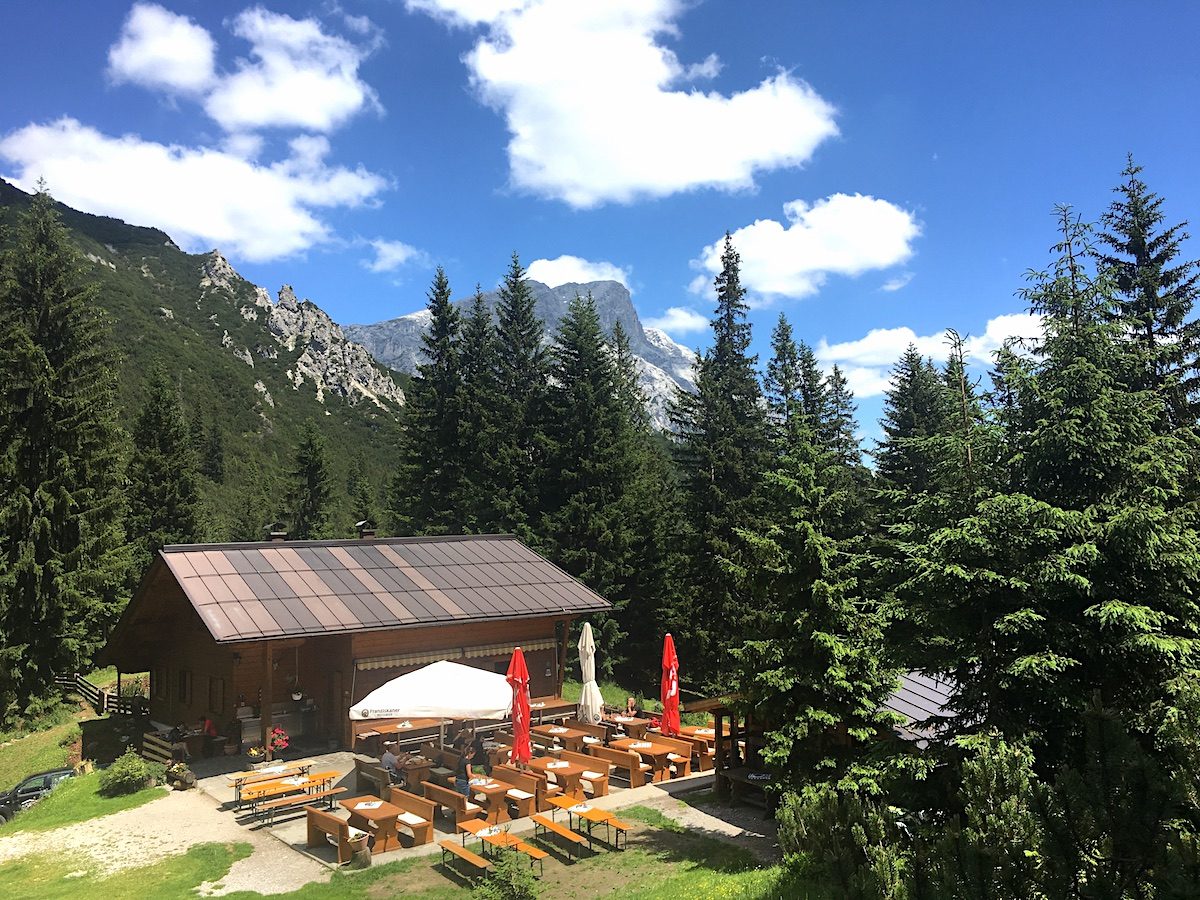 And as for the descent: I would suggest not to take the Klammsteig again. After the Strassberghaus back on the forest road to the junction “Bergsöhnesteig“. This leads to the hamlet of Lehen. And from the inn of the same name, it’s a short hike on the asphalt road to the Sonnensiedlung and then via a narrow path back to the starting point at the parking lot of the Thöni aluminum plant. 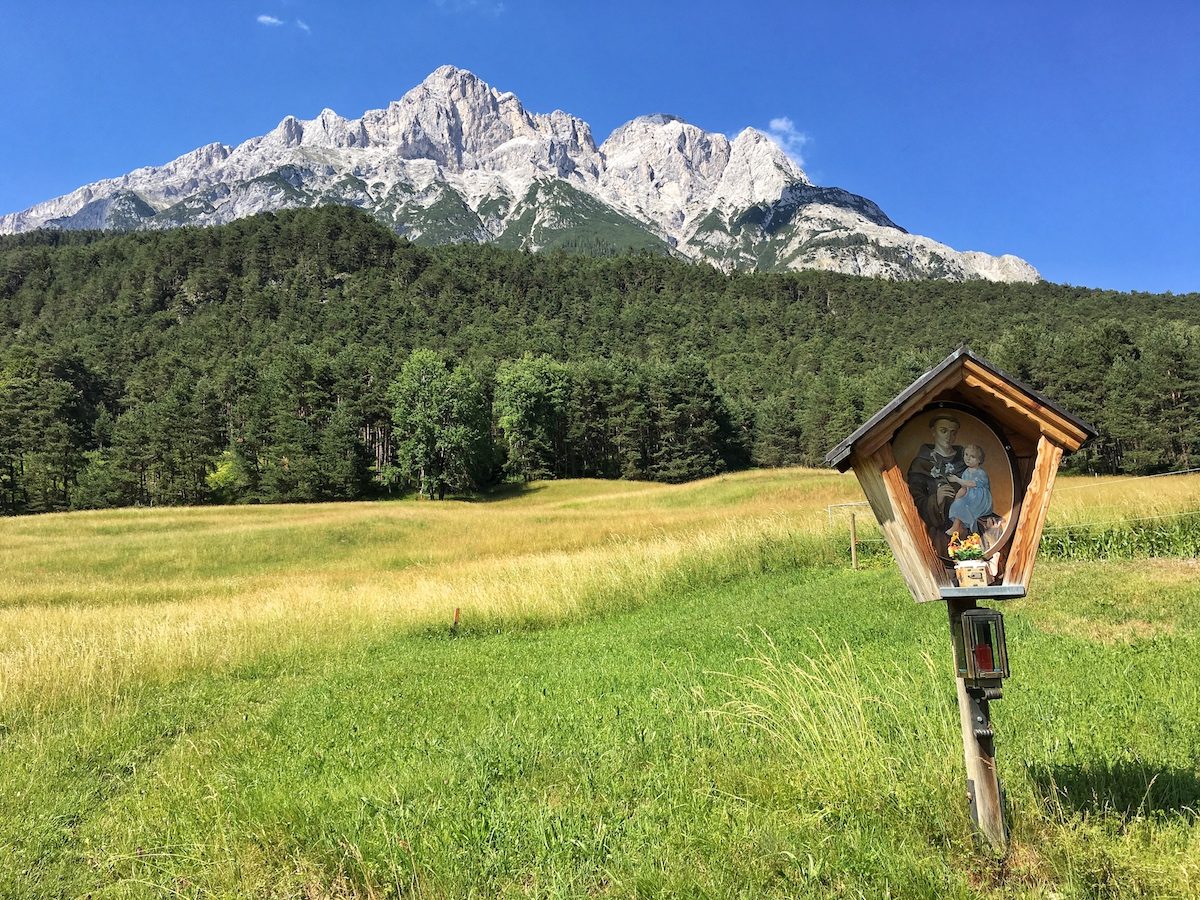 View from Lehen to the Hohe Munde. 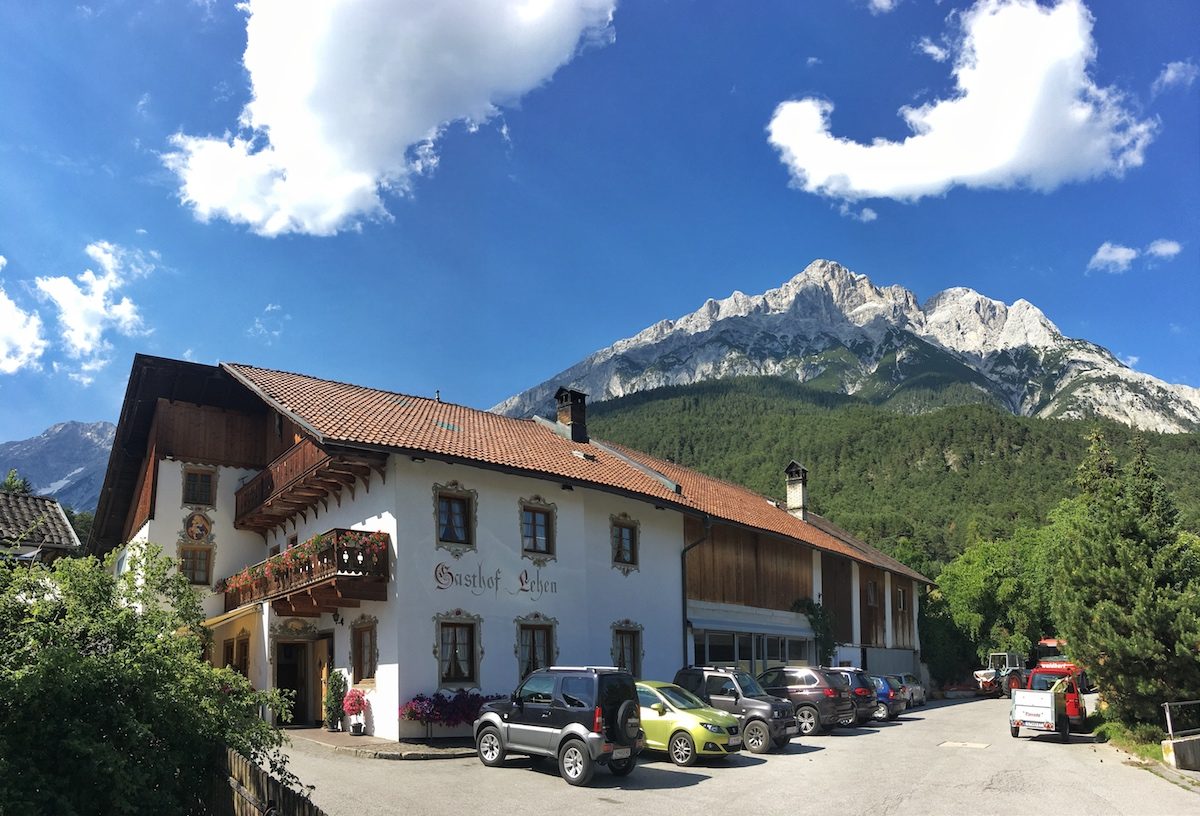 The Gasthof Lehen. Like something out of a Tyrolean picture book.

Walking time from Strassberghaus to the new Alplhaus:
circa 1 hour and 320 metres in altitude calculated from the Strassberghaus.

The hike to the Strassberghaus is also possible from Wildermieming.