Areas of low pressure keep passing over Central Europe from the northwest. Between these lows, there is only little space for ridges of high pressure. Thanks to just such a ridge of high pressure, our weather will temporarily calm down on Saturday. The weather will be bright and wintry cold.

On Sunday, a weather front will pass over our region bringing cooler maritime air and clouds and snow showers to our region.

Areas of low pressure keep passing over Central Europe from the northwest. Between these lows, there is only little space for ridges of high pressure. Thanks to just such a ridge of high pressure, our weather will temporarily calm down on Saturday. The weather will be bright and wintry cold.

On Sunday, a weather front will pass over our region bringing cooler maritime air and clouds and snow showers to our region. 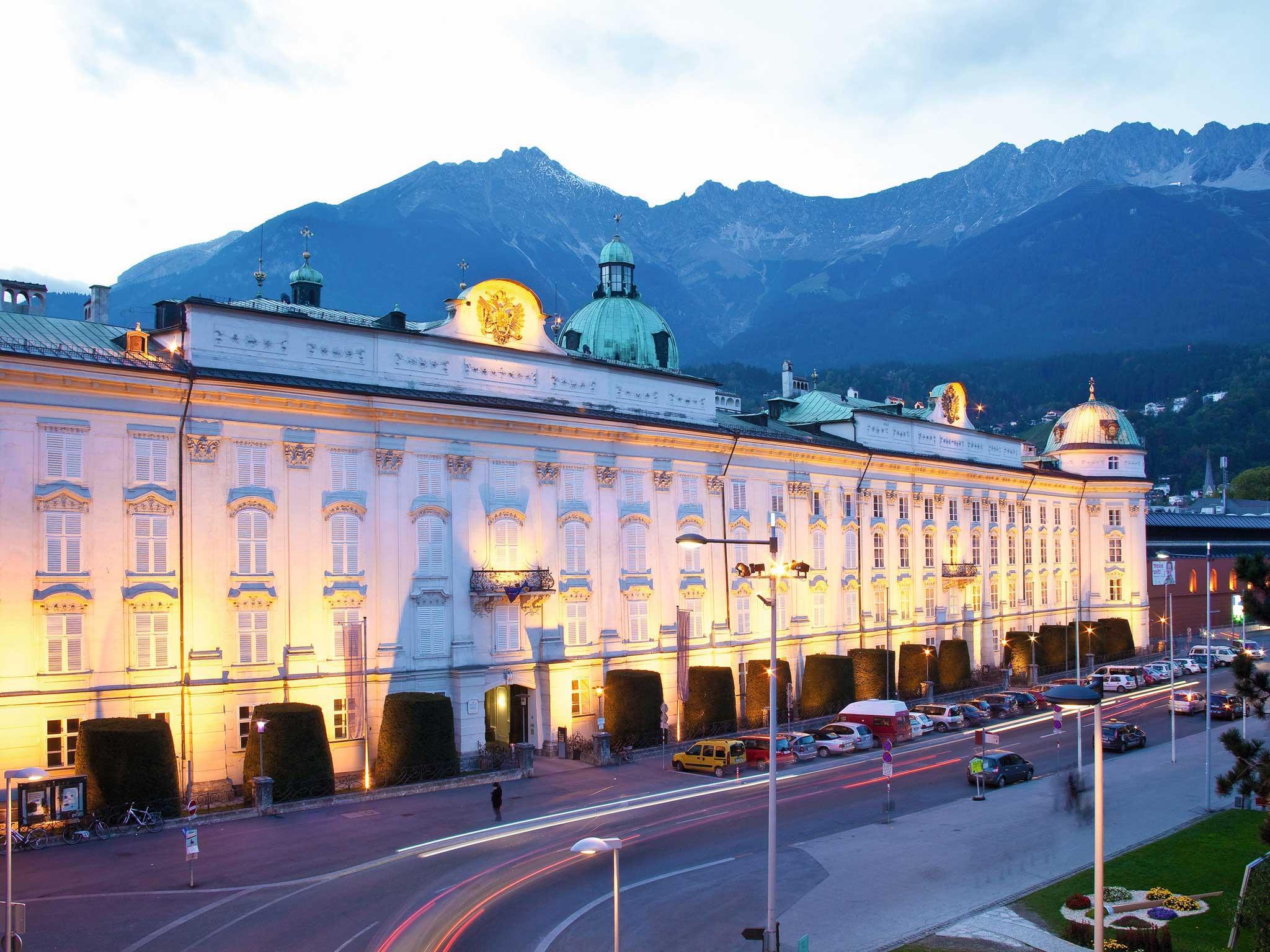 The Imperial Palace was completed in the year 1500 under Emperor Maximilian I (1459-1519). The palace was built to the same scale as is seen today and was captured as a watercolour by Albrecht Dürer. The painting shows a late Gothic courtyard with covered staircase, a Crest Tower and the women’s quarters (or “women’s rooms”). The reception area, which is known today as the “Gothic Cellar”, was built in the style of a large hall with columns and vaults. A “Kürnstube” (home to Maximilian’s hunting trophies), the “Silver chamber” (treasury) and the Festival Hall (with depictions of Hercules) are also reminders of the time.
The “Rennplatz” square in front of the Imperial Palace served as a competition arena to please the sports-loving Emperor.

Almost 250 years later, Maria Theresa (1717-1780) visited the Innsbruck palace and deemed it to be behind the times. There hadn’t been any Tyrolean princes since 1665 and the governor, who reigned Tyrol on behalf of the Emperor, lived in the governor’s quarters on the first floor. The representation rooms on the second floor, which were reserved for the Imperial family, were uninhabited. Maria Theresa arranged for the palace to be rebuilt in the Viennese late Baroque style and sent her best artists to Innsbruck: Konstantin von Walter and Nicolaus Parcassi. Martin van Meytens and his school and Franz Anton Maulbertsch were appointed for the interior. The renovations were interrupted by the Seven Years’ War and, therefore, only completed in the 1770s.

Maria Theresa decided to hold the wedding of her son Leopold (II) and Maria Ludovica von Bourbon in Innsbruck in 1765. Organising the celebration was quite a feat – everything needed to be arranged, from furniture to tableware. The wedding was held on 4 August and was a splendid celebration with 2000 guests (although the majority of these were “spectators”, meaning they weren’t catered for). The exuberant celebrations lasted 14 days and involved extravagant food, opera visits and much enjoyment. On 18 August 1765, the celebrations were brought to an abrupt end following the sudden passing of Emperor Francis I.
Maria Theresa went into deep mourning for her beloved husband: he was laid out in the Giant Hall according to customary Habsburg funeral ceremonies and later taken to Vienna by boat, where he was laid to rest in the Imperial Crypt.
Maria Theresa had the room where the Emperor died converted into a new chapel, had the Triumphal Arch built with one side dedicated to mourning and one side dedicated to the wedding and founded a convent where twelve noble Tyroleans were to pray for the dead Emperor for several hours each day. The latter survived the years and still exists today on a smaller scale.

In the 19th century, Archduke Karl Ludwig (1833-1896) was the governor in Innsbruck. During this time, he had the “Inner Apartment” refurbished for his sister-in-law Empress Elisabeth (Sisi). Furniture in the Second Rococo style by Viennese court artist August La Vigne was brought to Innsbruck and every room was decorated in a different colour. The furniture was adorned with exquisite silks, which also served as curtains and wall coverings. Elisabeth only stayed in Innsbruck a few times but her husband, Emperor Franz Joseph, was a frequent guest in Tyrol and stayed at the Imperial Palace.

Following the end of the monarchy (1918), former Imperial possessions became state property. Today, the Imperial Palace is the third most important historic building in Austria and is managed by the Burghauptmannschaft. The third and final part of the general restoration works was completed between 2006 and 2010. The palace is frequently used for high-profile events.

GIANT HALL: the most important banquet hall in western Austria, celebrating the time of the Habsburgs: in commemoration of Maria Theresa, Francis Stephen of Lorraine and their 16 children (full-length portraits by Martin van Meytens and school), after 1765.
Ceiling frescoes by Franz Anton Maulbertsch from around 1770: “Unification of the Habsburg & Lorraine dynasties” and “Regalia of Tyrol”.
Still used as a banquet and events hall today.

3. Chapel and chapel vestibule, sacristy (from the time of Maria Theresa): features the wedding and death of 1765CHAPEL: second half of the 18th century, high Baroque sculpture group by FA Leittensdorffer

4. Crest tower (originally from the time of Maximilian), Crest Tower on the Court Church side, adorned with Emperor Maximilian I’s coat of arms, coated during the Baroque reconstruction (today a rounded corner tower).Dürer’s representations of the late Gothic Imperial Palace (facsimile), vertical plans

Comprehensive guided tours.
Daily at 11.00: “The Imperial Tour”, a guided tour by Per Pedes Stadtführungen®. German only. Available in English with reservation only.
Reservations for groups of ten or more must be taken in advance. (Meeting point: Innsbruck Tourismus, Burggraben 3)