Not far from Innsbruck, you can take a short hike steeped in legend. From Zirl it goes to the Emperor Max Grotto in the famous Martinswand. The story of the legend is always present and omnipresent.

Zirl can be reached comfortably by bus or by car. The car can be parked at the parking lot next to the rescue Zirl.

Arrived there, I now walk on this historical path, which has been generally renovated, and is now really easy to master for everyone. Via a forest path I come up to the height of the Zirl quarry. 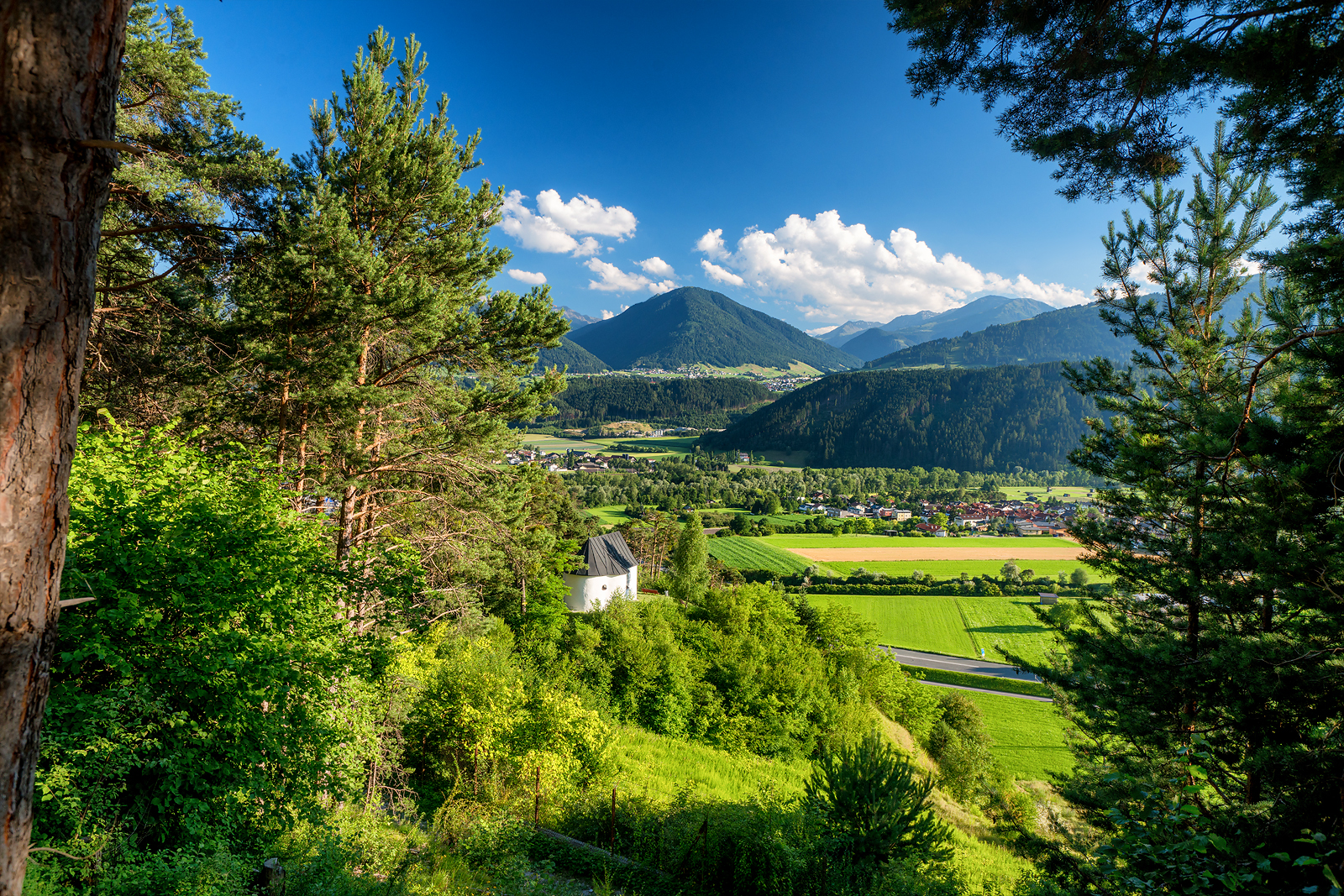 View to Unterperfuss during the ascent – Photo: Danijel Jovanovic

Via a ladder I reach a forest path. In small serpentines I go up through the forest and then stand directly above the quarry. The quarry looks very imposing from above and one can imagine that hard work is done here every day. Here you can already see the well-built path that leads me directly above the quarry area over to the Martinswand. The path is well secured by wire ropes and very wide. Since there are no trees blocking the view, I enjoy the magnificent view into the valley. The evening sun makes the rock shine in a great, warm tone. A short photo break is a must. 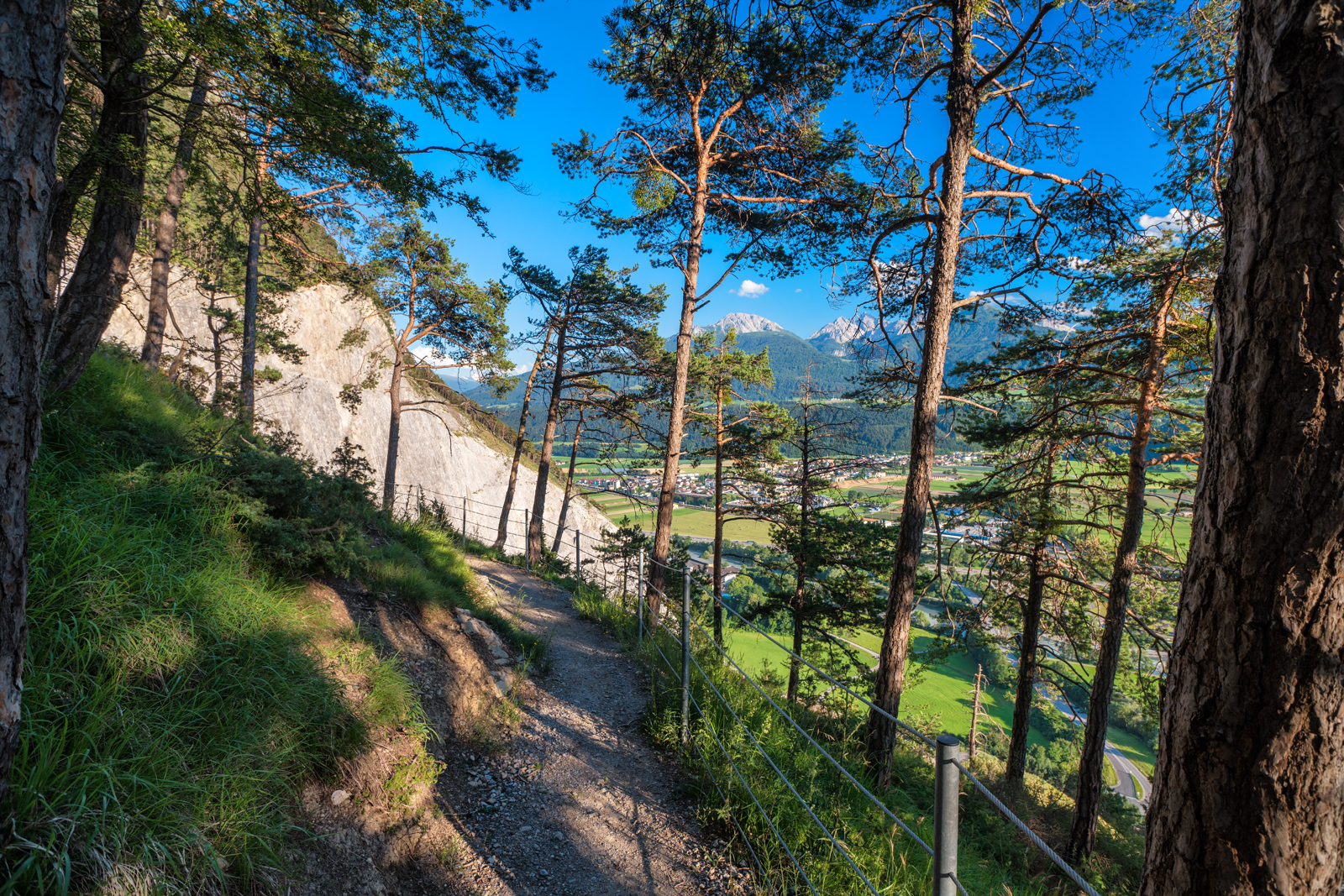 The path leads up to the Zirl quarry – Photo: Danijel Jovanovic 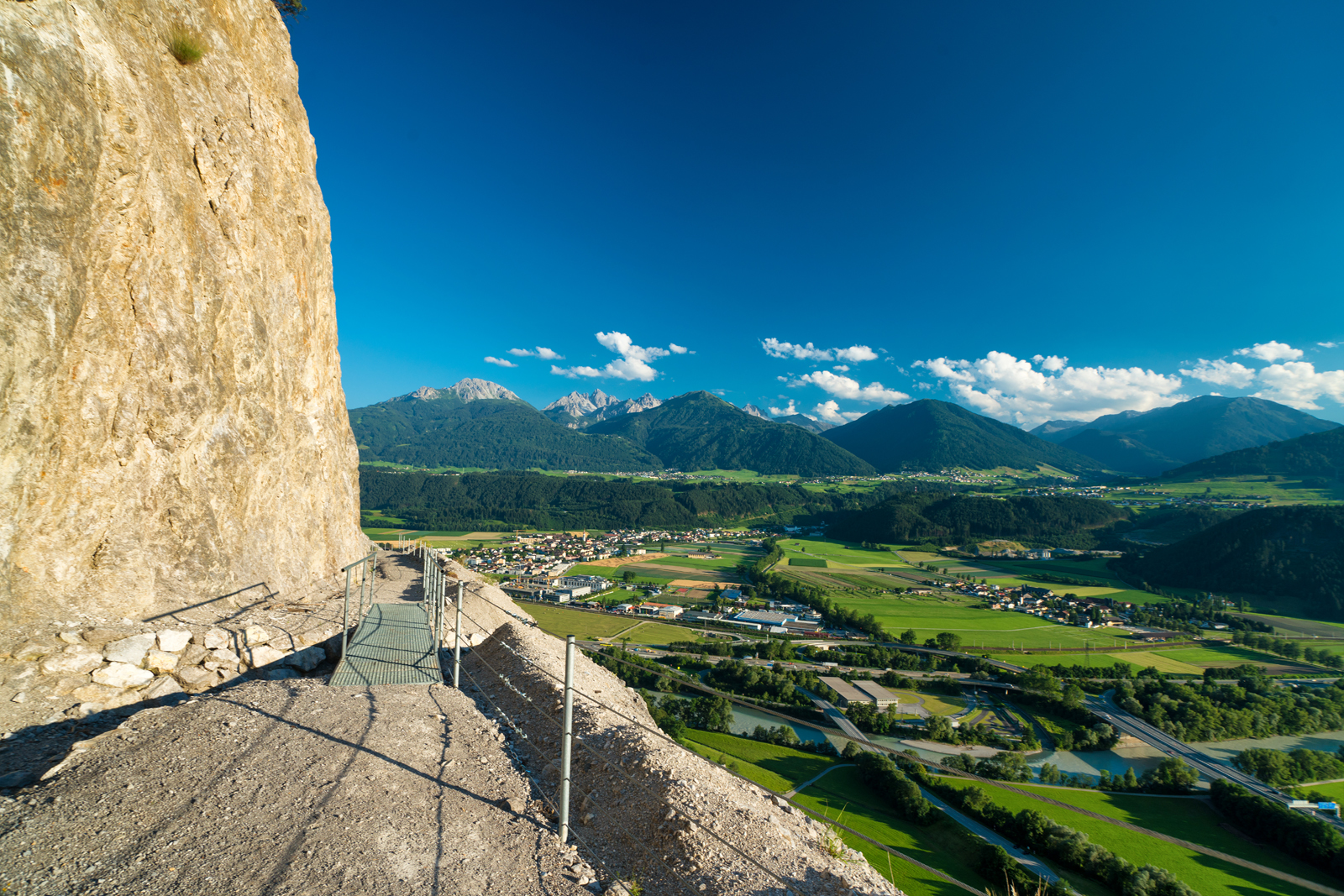 The path above the quarry is well developed and secured – Photo: Danijel Jovanovic

Having reached the end of the quarry, I enter the forest again. Again the path zig-zags up. Steeply ascending, but not strenuous, until I really stand in the Martinswand. The path continues along the wall. You should be free of giddiness in any case, it goes here now nevertheless properly vertically into the valley. Again and again my gaze swings over to the other side, the Kalkkögel, the Saile and the Sellraintal appear too beautiful before my eyes. 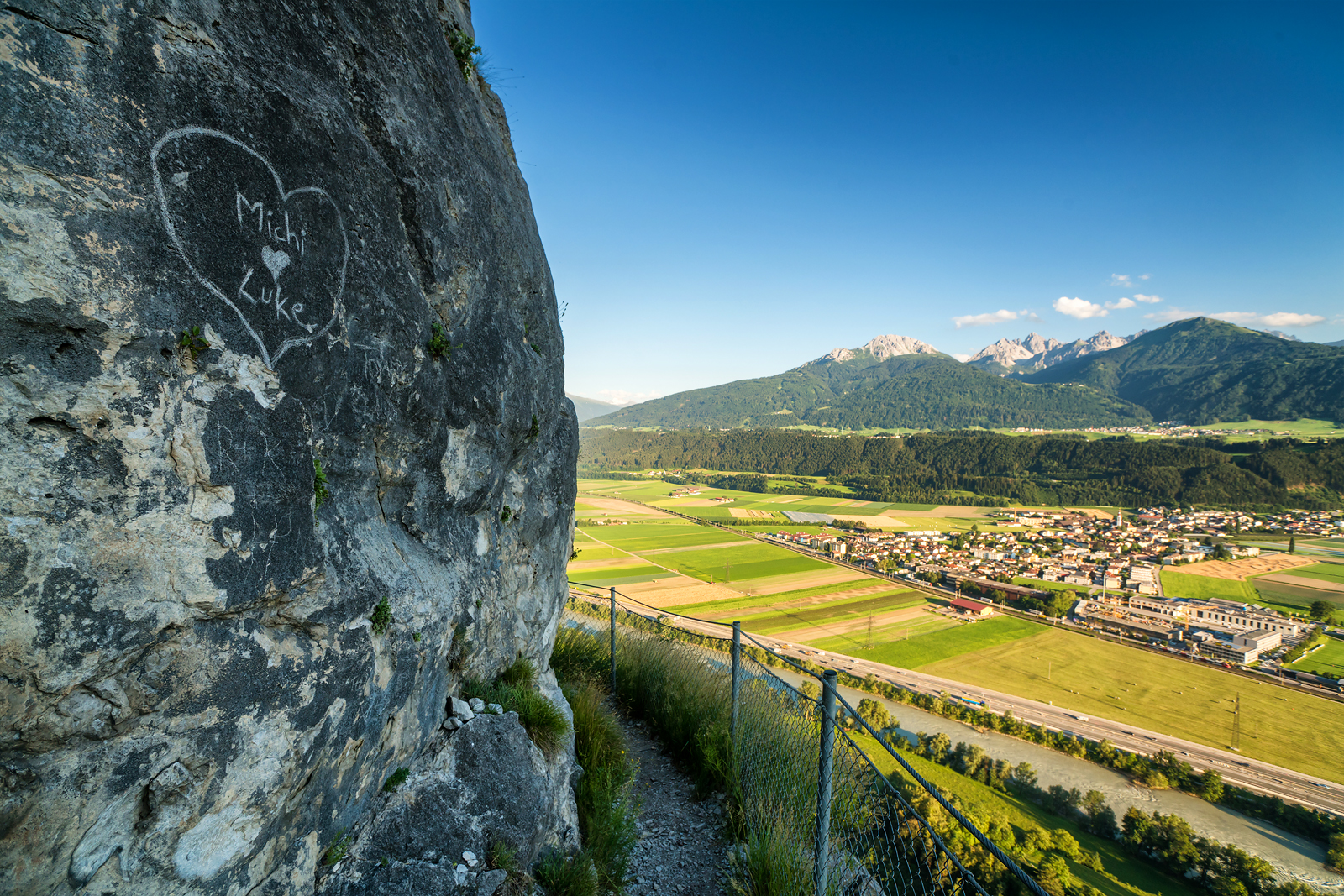 Here you are already directly in the Martinswand – Photo: Danijel Jovanovic

After a bend that cannot be seen, I can now see the grotto. Over stairs I go up the last piece as suddenly a climber beckons me from the vertical wall. Of course I don’t miss this opportunity for a great photo. In the Emperor Max Grotto I am greeted by two huge crosses. One hangs in the grotto wall, the other is attached to the abyss with the safety fixture and towers over the whole scenery. It is humid in the grotto, so I put on something warmer and take a seat at one of the two wooden benches. I now just enjoy the beautiful view of the Inn Valley, the villages below me and the other side of the valley. The mountains are already bathed in very warm sunlight. So it won’t be long before it sets. 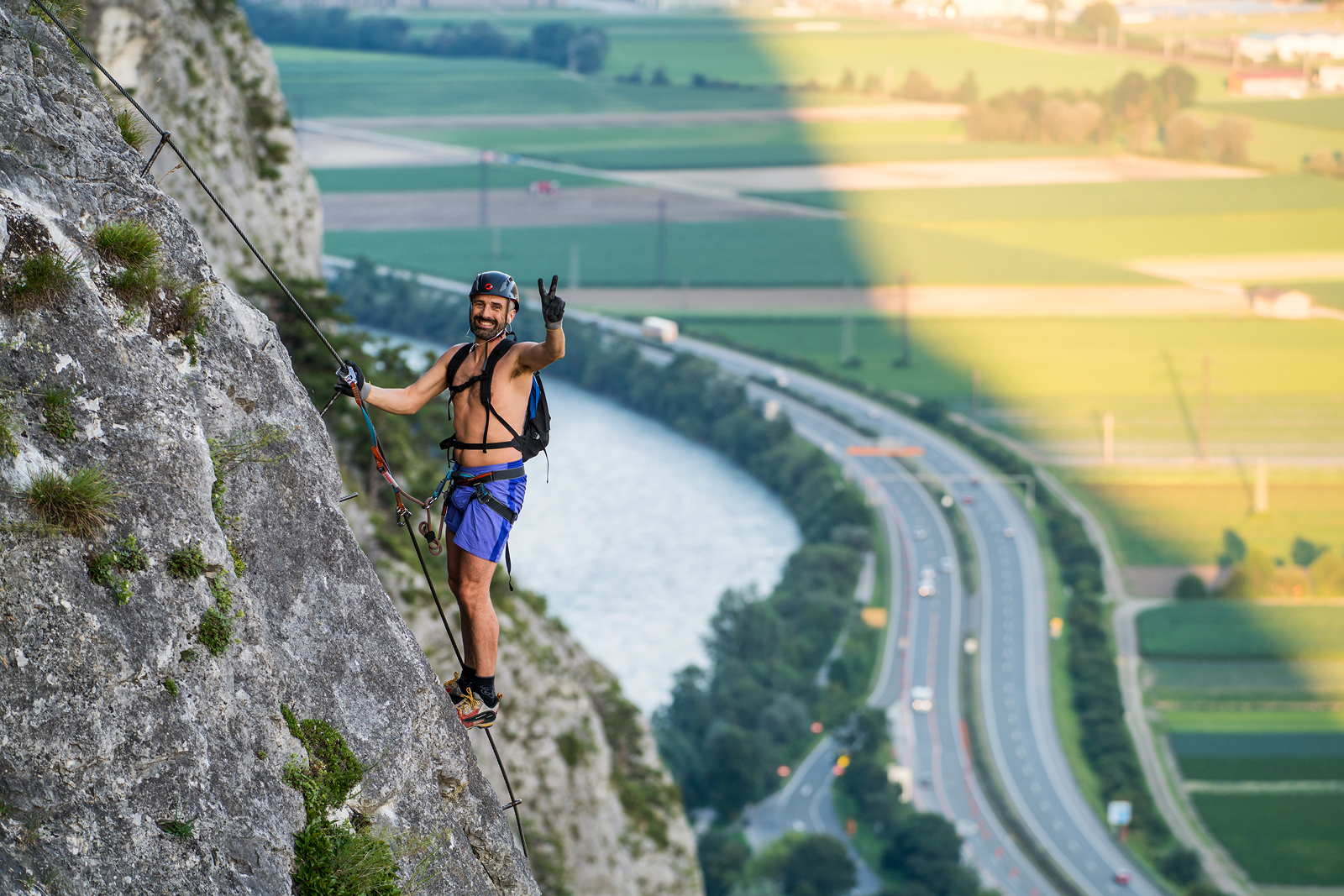 The via ferrata on the Martinswand – very impressive – Photo: Danijel Jovanovic

After a short break I explore the cave. In the meantime, the climber from before has also arrived. I thank him for the photo and of course I am curious. He tells me that here the first part of the via ferrata ends. You can then climb up another short piece, but since it is already late, he will descend again. Fascinating it must be to climb up here, in a vertical wall, but only suitable for really experienced. The via ferrata has category E, the friendly sportsman tells me, and is one of the most difficult in the region. I am amazed at the courage of the man and am grateful for the info. 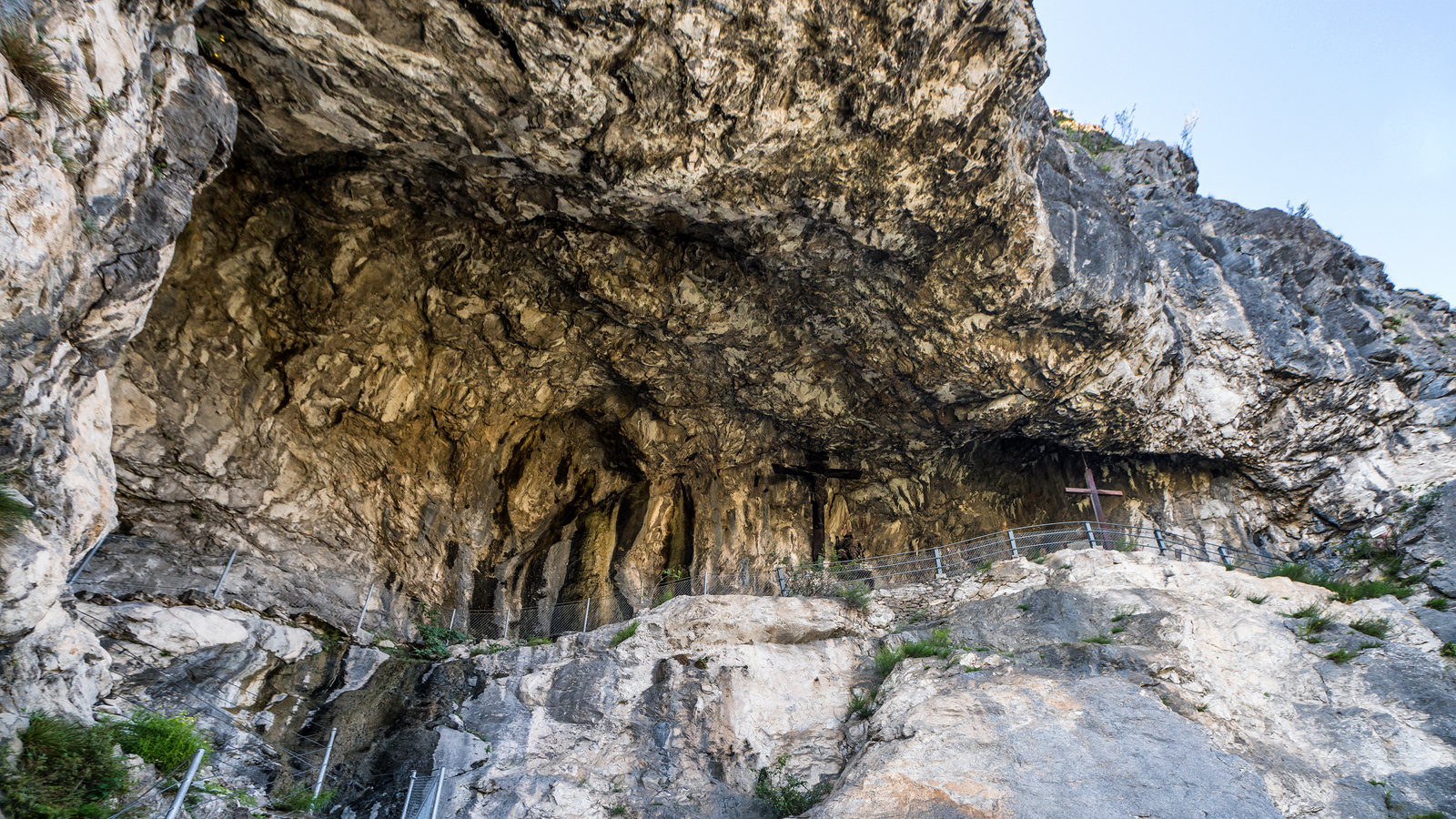 Slowly it is getting dark and I deliberately chose the evening hours to go up here, as I was hoping for a great photo in the twilight. I am rewarded. The view is really wonderful. The lights in the houses go on and the sky is now getting darker. That’s how beautiful my Innsbruck is. I am happy. In the darkness I remember again the legend that gave this grotto its name. 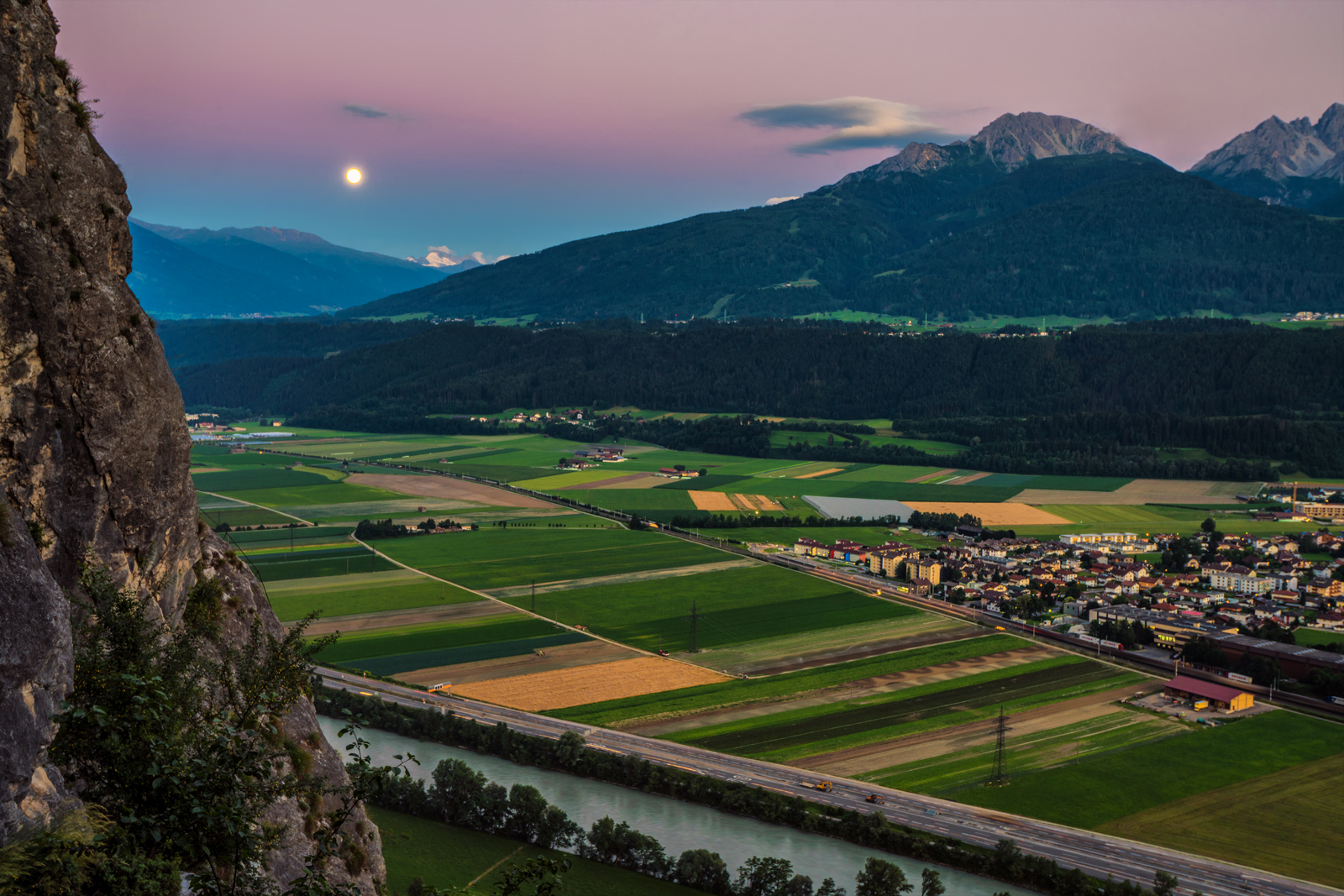 The full moon has risen over the Inn Valley – Photo: Danijel Jovanovic 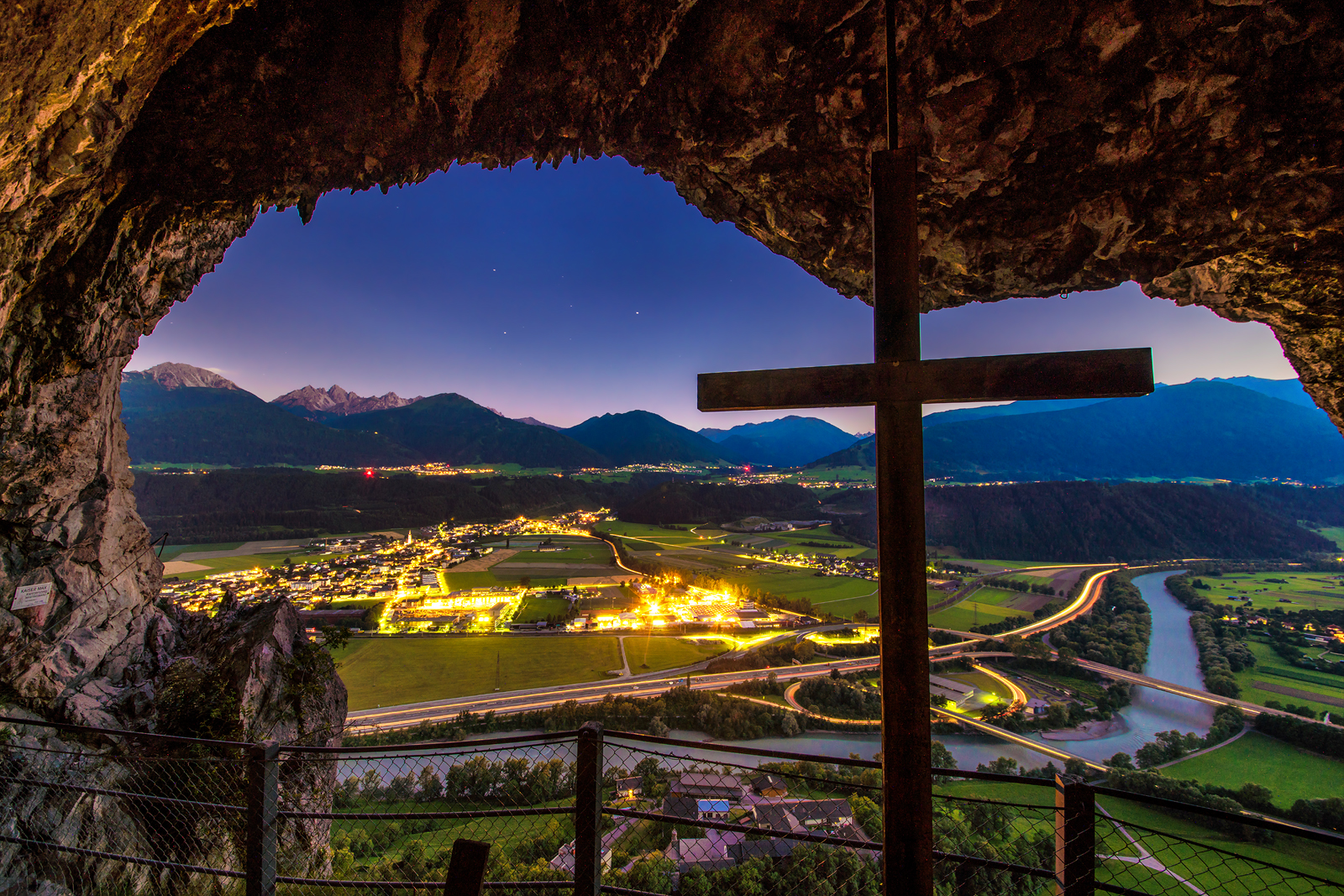 Emperor Maximilian was a passionate hunter and was very fond of chamois hunting. However, when he came up here on the hunt, he got lost and could no longer go forward or back. He was trapped in the Martinswand and waited in the grotto for help. He spent two days here. According to legend, Kematen, the village at the foot of the Martinswand, also takes its name from this event. The emperor begged for help “wenns denn nur kematen” (“if only they would come”) – to help me. Emperor Maximilian was finally saved after two days by a peasant boy. Thus the village came to its present name of Kematen, Emperor Maximilian was saved, and because the peasant boy disappeared, it was thought that a guardian angel had rescued the emperor from his threatening situation. Because of the rescue, the emperor had the large cross erected in the grotto, which has since been called the Emperor Maximilian Grotto. 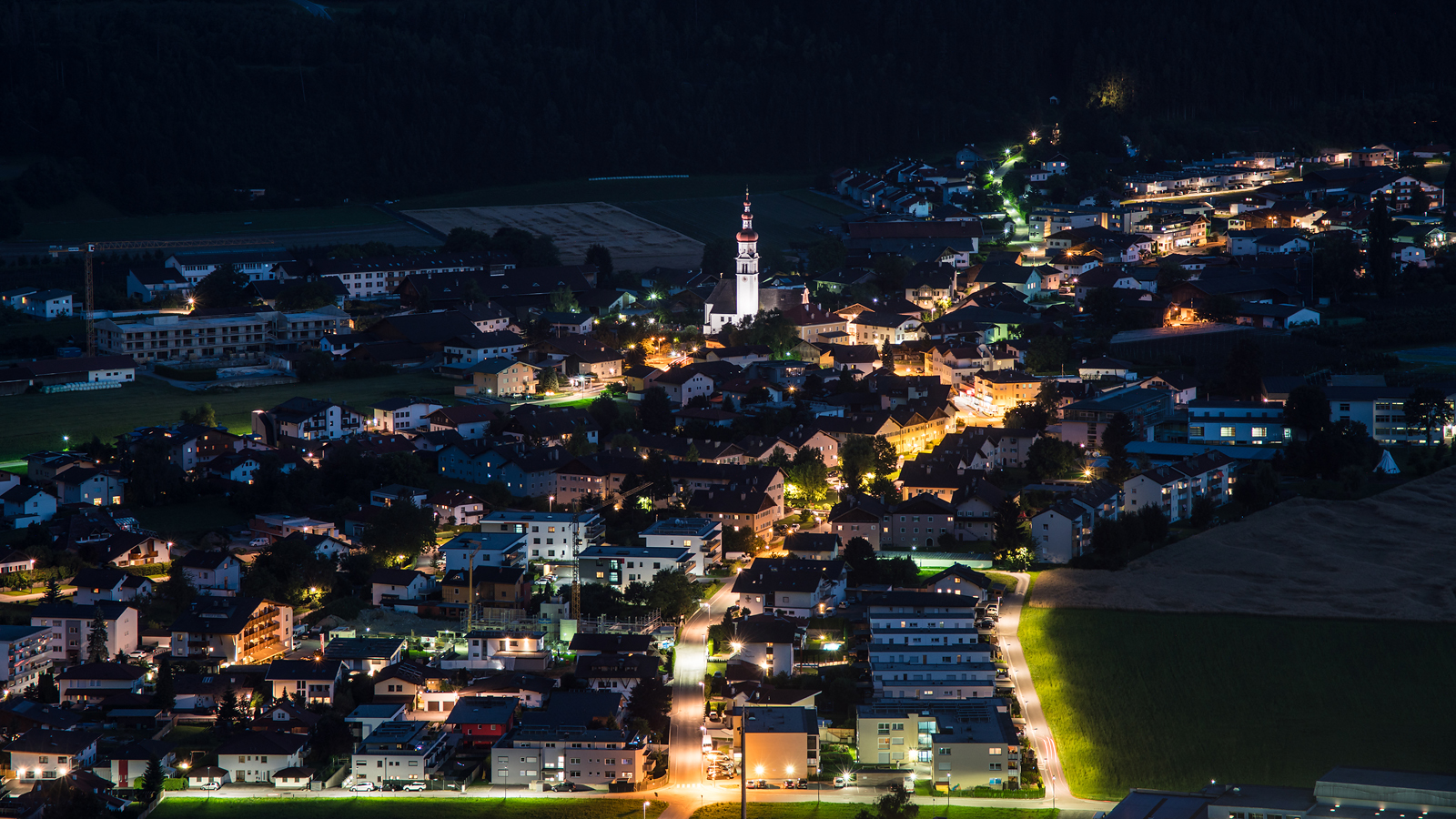 By now it has become night, but my headlamp brings me safely back to the quarry. Here I have now a wonderful view of Zirl at night, with a still gently existing evening red in the Upper Inn Valley. Simply marvelously this tendency. Of course, I unpack my tripod and hold the moment for you. 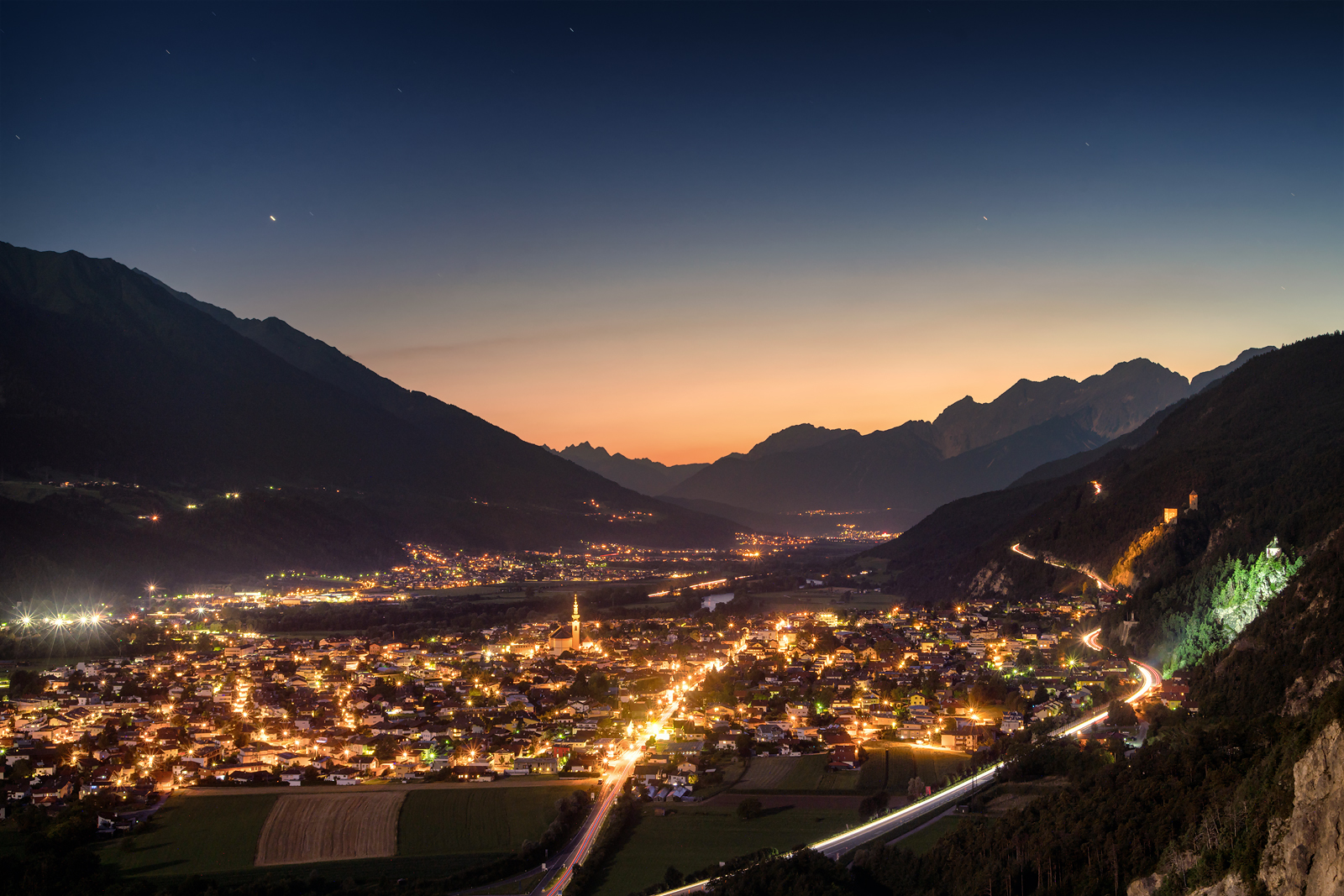 Wonderful view of Zirl on the way back – Photo: Danijel Jovanovic

After a short but very interesting hike I arrived back at the car.

At the end I would like to mention that the path is really suitable for beginners and is also not strenuous. Security was written large and the complete path is abundantly secured. The views are wonderful and you walk on the emperor’s path.

Boundless variety – the 13 ski resorts of the Innsbruck region

13 ski resorts on one ticket Innsbruck is unique. There are thousands of reasons for this, the…

Innsbruck is worth a trip in all seasons, and each is unique and special in its own…

Five days of snow, lifestyle and culture with the SKI plus CITY Pass Stubai Innsbruck

What makes mountain sports, or as in this case freeriding, so exciting? Just one of many possible…