From the summit to the glass

Turn on the tap in Innsbruck and you will be immediately greeted by a flow of crystal-clear spring water. The water comes from deep in the Alps and trickles through the eternal rocks for many years before reaching us in its flawless and delicious form, rich in minerals. This water not only flows from the many public drinking fountainsin Innsbruck and on the Nordkette mountain range, but is also supplied to more than 10,000 households in the city. We spoke to Gerd Albrecht from the city’s public utilities company, the “Innsbrucker Kommunalbetriebe” (IKB), about exactly how the water makes its way down from the mountains into your glass. We met him at the village fountain in Mühlau and he brought a key with him, a key that opens the city’s largest treasure chambers, located not far from the village.

In Innsbruck, you can drink the tap water! You don’t need to buy bottled water because the local water that comes out of the tap is top quality. This also applies to all of the local springs and fountains. If the water is not suitable for drinking, this information will be clearly displayed on a sign.

Water enriched in the rocks

Gerd Albrecht has brought an empty glass with him. He holds it under the powerful jet of water flowing from the ancient fountain and fills it right up to the rim. After waiting until the liquid has completely settled, he holds the glass up into the sunlight and watches as the sparkling rays of light are refracted as if passing through crystal. The water expert tells us that it takes a good ten years for the water to reach the glass. This precious liquid is enriched in the rocks where it becomes something truly special that should be treasured and protected. Strict protection regulations and specialists like Gerd Albrecht are therefore used to safeguard the extraordinary quality of Innsbruck’s water.

The engineer explains to us that most of Innsbruck's drinking water is supplied by the “Mühlauer Quelle” spring water facility, which uses a kilometre-long system of tunnels high above the city to collect water. This system is able to achieve a flow rate of 600–2000 litres per second. Two pressure pipelines then bring the water from the so-called "Wasserschloss" (water castle) up on the mountain down into the valley, covering a distance of 445 metres before reaching Mühlau. In Mühlau, the water flows into a distribution network that is 460 metres long and used to fill empty glasses all over the city. After finishing his story, the water expert gives us a refreshing smile. 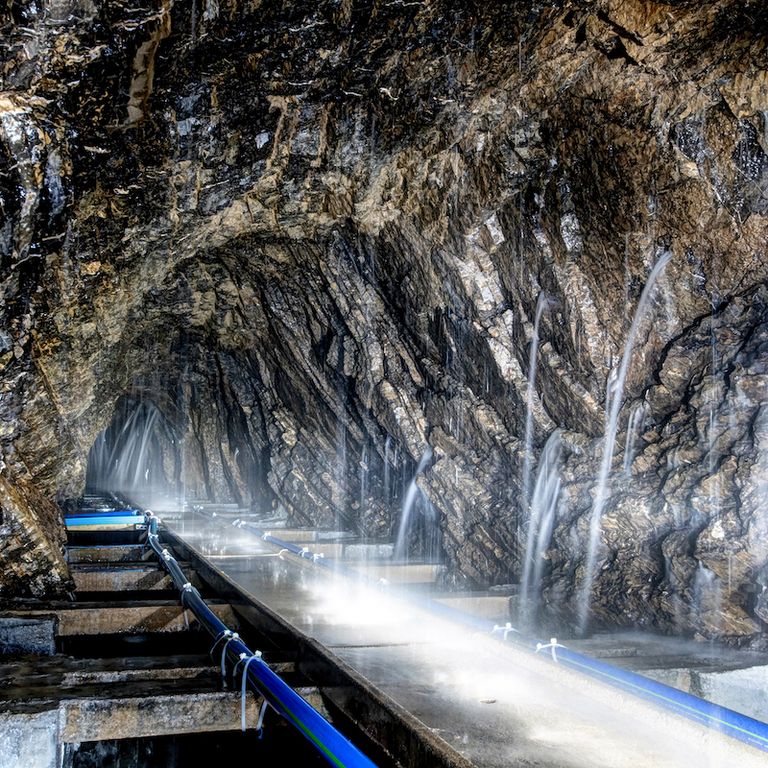 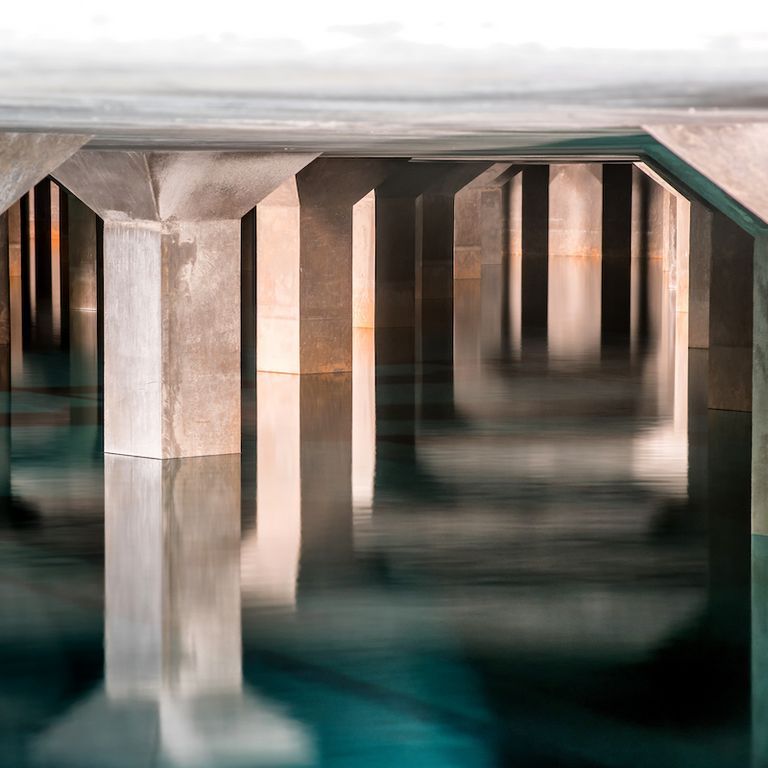 The tunnel houses the exceptionally high-quality, cool mountain water that later flows out of the taps in Innsbruck. © IKB

We follow Mr Albrecht a short way up the mountain from the fountain in Mühlau until we reach a well-secured building. Cameras peer down from solid walls, while barbed wire and heavy locks secure the treasure inside. The treasurer’s keys jangle as he turns one in the lock and slides the bar open. He asks us to refrain from taking photos for security reasons. We’re also not allowed to touch anything due to the importance of hygiene. Before we enter the treasure chambers, Gerd Albrecht shows us the facility’s two giant drinking water turbines. As the water makes its way down into the two underground high-level tanks, the water pressure is actually also used to generate sustainable electricity. Mr Albrecht points to a chamber several metres under the ground, where huge steel pipes transport the masses of water through the system. We climb down some narrow stairs into the depths of the system, hearing the tons of water rushing through the walls next to us. The keys jangle again and when the door opens, we can’t help but gasp.

We are greeted by the sight of two expansive lakes full of what looks like black crystal but is actually an unbelievable twenty-six million litres of drinking water. The two high-level tanks are eight metres deep, as dark as night and as smooth as glass. The air is cold enough to make you shiver, which makes sense given that the water has a chilly temperature of five degrees Celsius when it comes down from the rocks, explains Mr Albrecht with a smile. This is the ideal temperature for ensuring that the water remains completely free of germs and can therefore be supplied to the people of Innsbruck in what is guaranteed to be its completely natural form, fresh from the mountains and with no treatment whatsoever.

The city of Innsbruck gets its water from a total of twelve springs with just as many high-level tanks. The facility in Mühlau is the biggest by far and is responsible for providing 90 percent of the city’s water supply. All of the high-level tanks are also used as buffer tanks in order to ensure that the springs of Innsbruck are able to provide local residents with crystal-clear spring water directly from the mountains 24 hours a day. 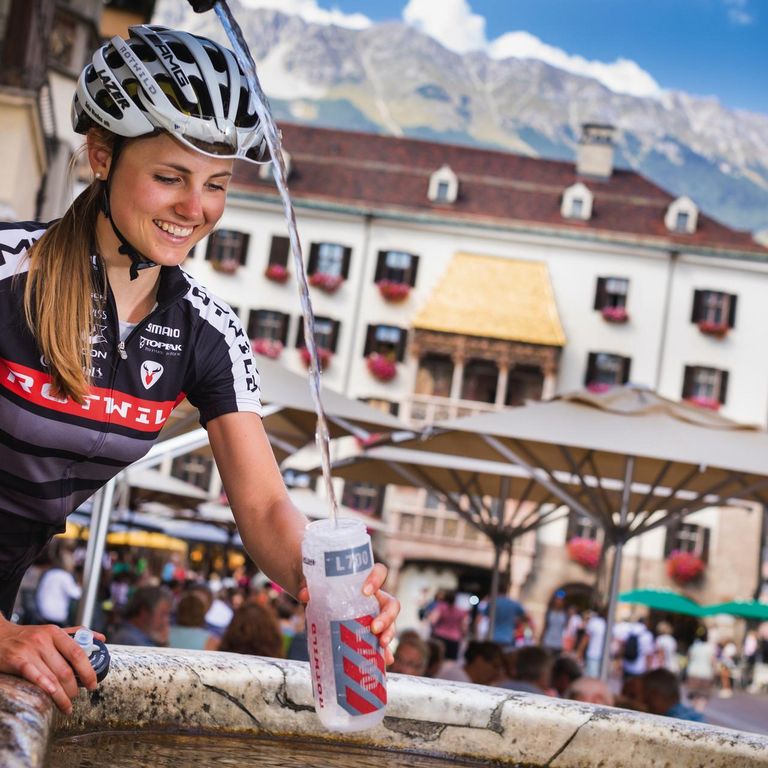 Water on the go: you can find top-quality drinking water in many places throughout Innsbruck and the surrounding villages. 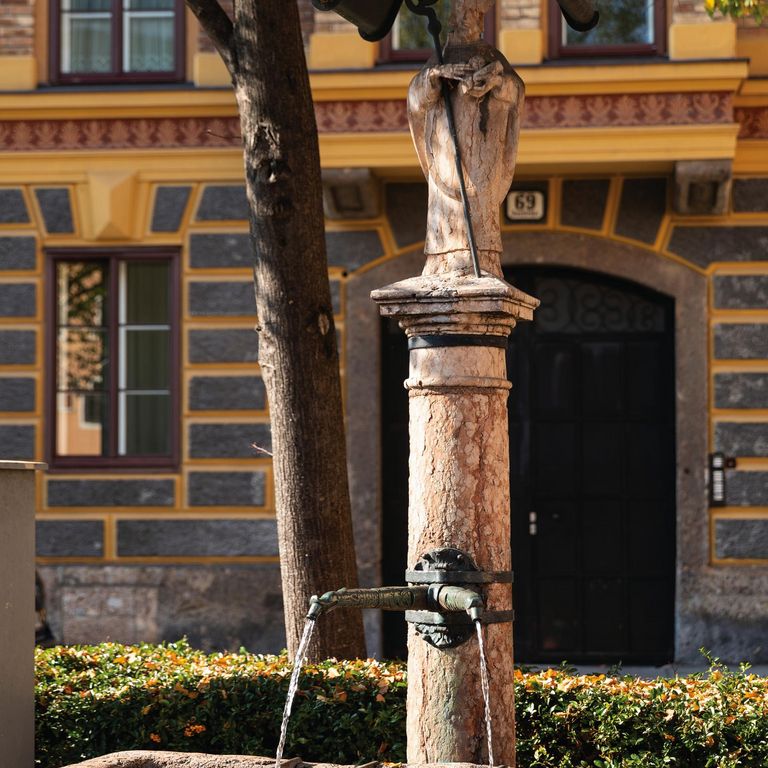 This fountain is tucked away in the St. Nikolaus district, near the Inn Bridge and the famous row of colourful houses along the River Inn.

When the friendly water expert brings us back up to the surface, he gives us a couple of tips before saying goodbye. Anyone who wants to find out more about Innsbruck’s water should take a look at the Innsbruck Water Trail, a beautiful hike leading through the picturesque Mühlau Gorge and up into the area of the springs. The trail continues from there along a panoramic path to the Arzler Alm mountain hut where hikers can stop off and refuel before heading back down to the city. Incidentally, the Water Trail begins right here at the Mühlau fountain.

If you’d rather explore the water’s journey to Innsbruck from the comfort of your own home, you can also experience it in digital form HERE This 360° virtual reality experience in the form of a fascinating 3D film project by the City of Innsbruck is sure to impress you and was recently even presented with the “Neptun Wasserpreis 2019”, an Austrian award for achievements focusing on water. But be warned: it might make you thirsty!

The connoisseur's guide to water quality in Innsbruck

Innsbruck
Fineweather: 100%
3°C/37°F
To the Panoramacam
Weather for Friday