MUST EAT: The 5 classics of Tyrolean cuisine

To really get to know Tyrolean cuisine, you need one thing above all: time. And a good appetite, because the traditional dishes from the Alps have always been hearty and fill hungry bellies. Many of the dishes have been cooked this way for generations and are served in private households as well as in the inn or in the cosy Almstube. Creative interpretations are always welcome, cheap substitutes for ingredients are strictly frowned upon.

So where to start when it comes to tasting? These five classics of Tyrolean cuisine have a lot in common: they are the stuff of culinary Alpine dreams. Kaspressknödel, Käsespätzle, Kaiserschmarrn, Kiachl and Kirchtagskrapfen. They all begin with a capital K. Coincidence? Maybe.

There are dumplings in many countries and other parts of Austria as well. Kaspressknödel, however, are very typical of Tyrol. There are many preferences around the dumpling, which is topped with cheese and baked in hot fat. Some only like it if it contains grey cheese, others can safely do without it. Graukäse is a low-fat sour milk cheese with a low fat content and is produced in summer on many alpine pastures in Tyrol. If you want to know more about grey cheese, you can find an article about the superfood from the Kemater Alm on the blog. Taste-wise, you usually know at the first bite whether the cheese has found a way into the dumpling or not. And also whether you find it good yourself.

The exact mixture and number of cheeses is up to the respective chef and is often a well-kept secret at mountain huts. In some places in Tyrol it is made without any dumpling bread at all, but only with potatoes and cheese. Around Innsbruck, dumpling bread (bread cubes) is the norm. You can order it in a restaurant all year round, in summer with salad or sauerkraut, in winter it is also delicious in a good soup. A big advantage over cooking it yourself: your own four walls and clothes remain odour-free. If you still want to try it, you can find my best recipe for Tyrolean Kaspressknödel here. Another delicious variation can be found in the post of my blogger colleague Nadja.

Where to find the best Kaspressknödel in Tyrol can be seen as a salonable topic of conversation with new and old acquaintances, in addition to the weather and the current snow situation. If you want to answer this question once and for all, there’s only one thing left to do: taste for yourself. You could start, for example, at the Umbrüggler Alm, the Arzler Alm or the Sunnalm in the Axamer Lizum ski area. In the middle of town, for example, they are on the menu at Gasthaus Anich.

If you don’t know what to do with the crispy, stinky cheese dumpling, you should try the bacon dumpling. We also have a recipe for it here on the blog. Handy to know: On menus in Innsbruck restaurants, it is also affectionately often called Tiroler Knödel. 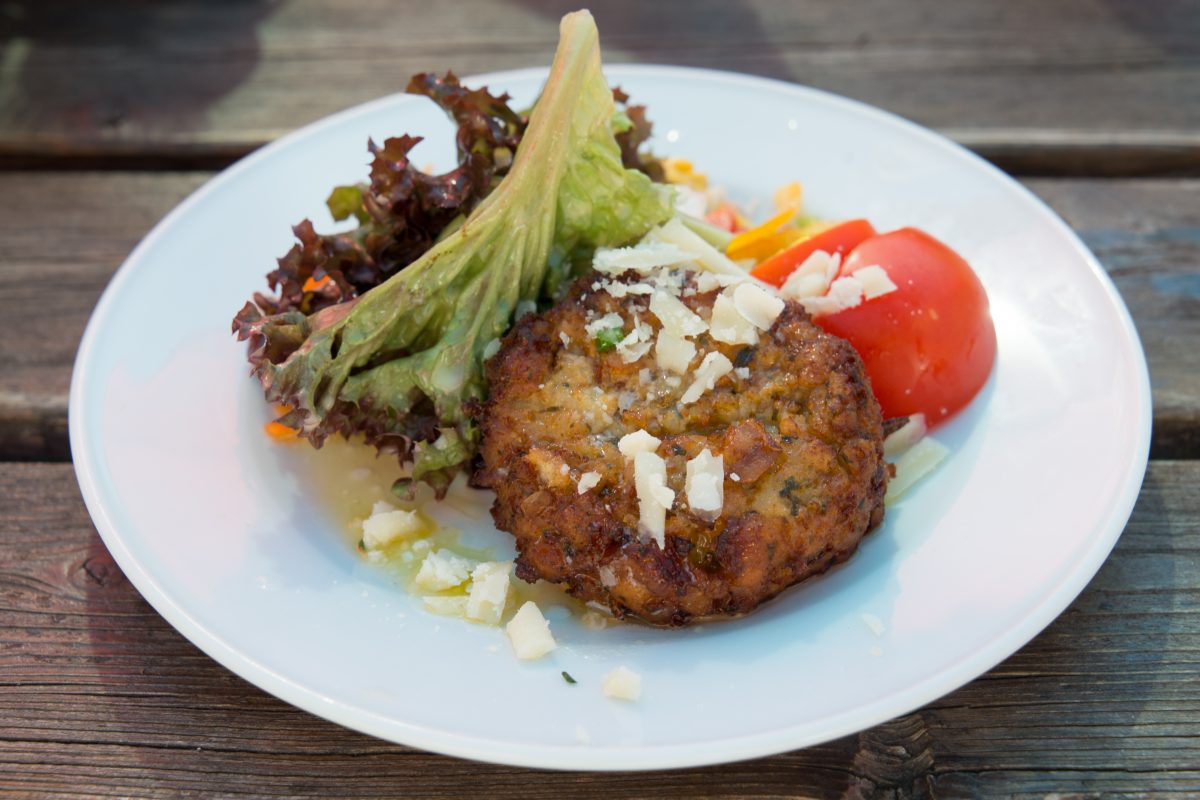 Käsespätzle are often found in the Alps in different variations and different names Kasspatzln but only with us! Every family has – how could it be otherwise – their favourite recipe. I personally recommend a small variation of the dough recipe with light spelt flour, which is more digestible and is super suitable for spaetzle. The cheese can be a spicy mountain cheese, preferably from a Tyrolean mountain pasture. If you go to the market hall for advice, you will certainly find your favourite combination. When it comes to onions, there are those who like them sautéed and steamed until translucent. And those who prefer it crispy-fried. But the author and cook of the photo below thinks you don’t have to choose: it tastes best with two kinds of onion!

In Innsbruck you can get excellent Käsespätzle for example at the Weissen Rössl.

The culinary immigrant in Tyrol has won a permanent place on the menu in almost all of Tyrol’s huts. The struggle was probably not difficult, because who can resist a real Kaiserschmarrn? There are various theories about its origins, involving either Empress Sissi and/or her husband Emperor Franz Joseph I. In Bad Ischl in the Salzkammergut region, people boast of having served Kaiserschmarrn as early as the Emperor’s time, while here in Tyrol, the favourite dish of many was not served until half a century later. Important characteristics of a good Kaiserschmarrn: freshly prepared (it can take a while), airy and not too buttery. Lightly flambéed, it gets a fine caramel-crunchy note on top. Of course, a little icing sugar should not be missing! Depending on the preferences of the house, apple compote, plum compote or cranberry compote are served with it.

Many an innkeeper also tries his hand at refinements, such as a blueberry pancake. That this is mostly a failed Schmarrn, one recognizes if the “blueberries” come from the deep-freeze assortment and leave except blue color hardly something at taste at the plate. If, on the other hand, it is a real cranberry kaiserschmarrn, you should strike quickly, because then the chances are high that it is wild blueberries from the forest, which are real flavour bombs. If you want something really, really traditional, you can order cranberry dumplings anyway. They are only available seasonally and are for many the culinary highlight of the summer!

Nadja has a recipe for a Kaiserschmarrn here on the blog. The Kaiserschmarrn pictured below is one of the best of its kind and is served at Gasthof Marlstein in Kühtai. It tastes especially good if you eat it during the Innsbruck Trek, then you really deserve it! 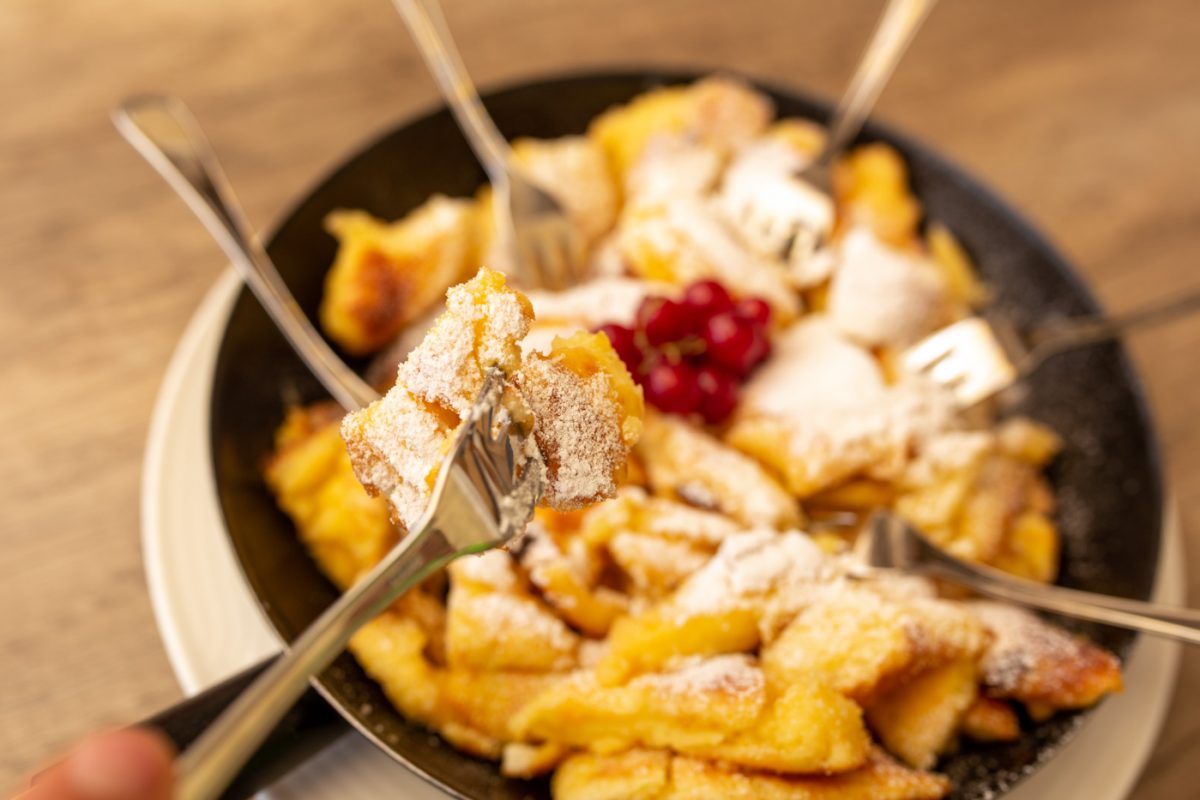 These sweet doughnuts taste best when they are freshly lifted out of the hot fat. Whether enjoyed with cranberries or sauerkraut, hardly anyone can resist them. The easiest way to get them is at Christmas markets starting in mid-November in Innsbruck. Also at other festivals food stands with Kiachl are not uncommon. Rarely you can get them in restaurants, because they are always freshly baked out of yeast dough. 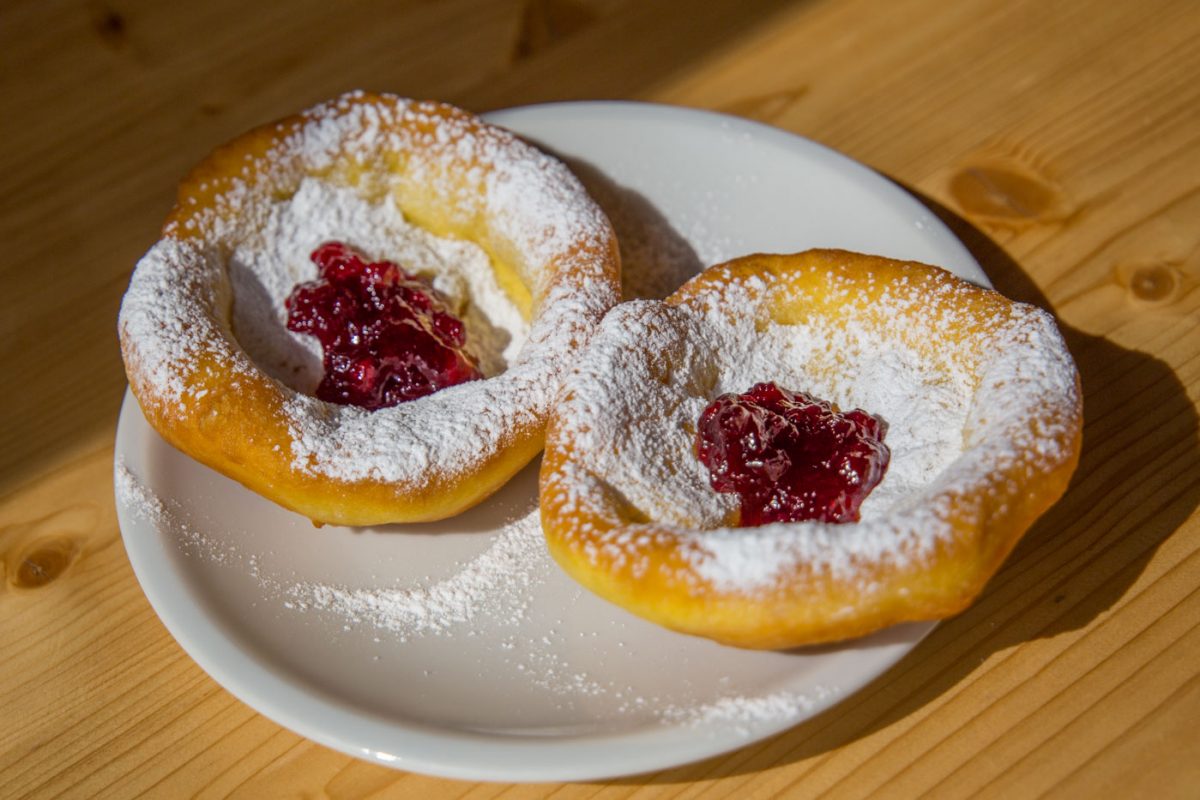 Oh so good. Kirchtagskrapfen can be found all over Tyrol and everywhere they are filled a little differently. Every now and then you can find them on the dessert menu in huts. The pastry is slightly crispy on the outside and very sweet on the inside and goes very well with a good coffee. In autumn the fillings are mostly made of poppy seeds, dried pears, dried plums and other seasonal products like nuts and raisins. In Innsbruck you can get them seasonally in the branches of the bakery Brotbuben or (and according to the author these are the very best!) in the fruit & vegetable shop Niederwieser in Museumstraße 19. Event tip: In Zirl they are traditionally eaten at the Zachäussingen. 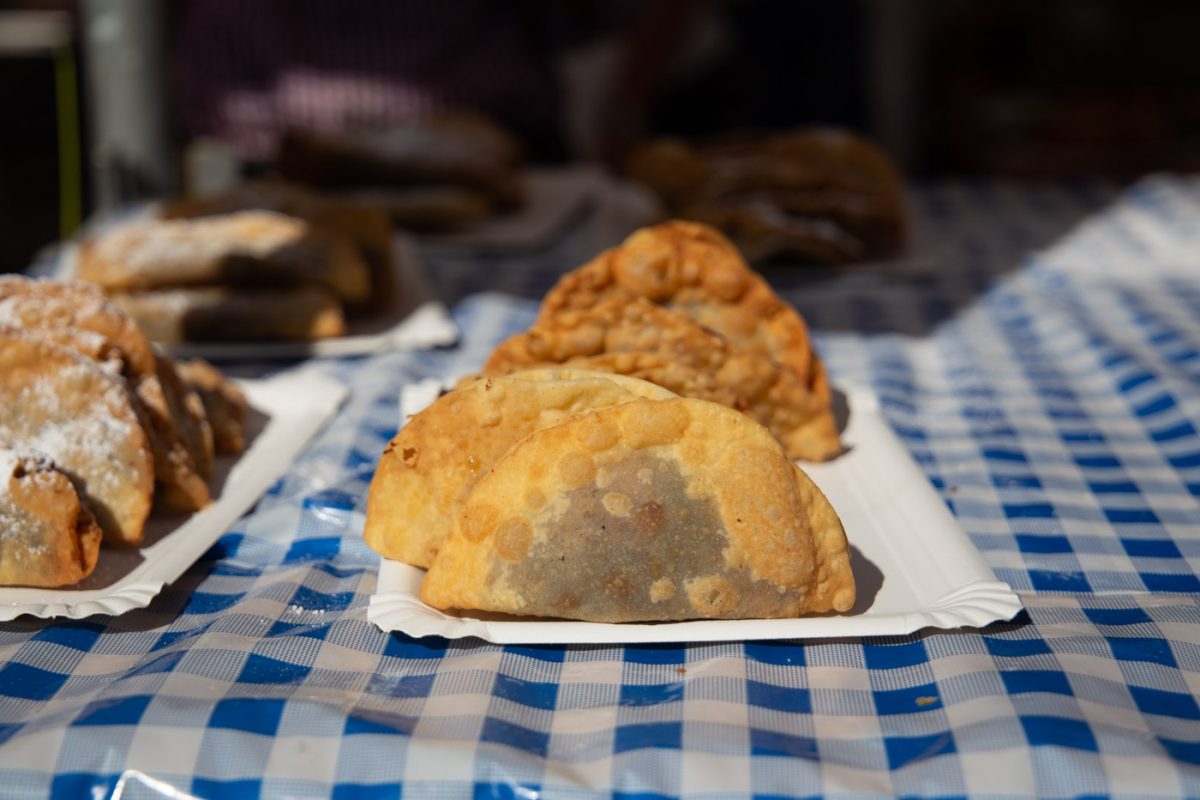 Busted The Tyrolean “Gröschtl” is of course spelled with a G. But because G and K in the Innsbruck dialect tend to merge into a K-CK, the dish gets a place of honor in this list. We have the recipe for Tiroler Gröstl here on the blog. You can get a good Gröstl made from regional potatoes, for example, at Restaurant Spitzbua.

Nadja’s recipe for Tyrolean Krautkrapferl you can find here. You will hardly find them on menus in Innsbruck, they have their origin in the Allgäu. Speaking of Krapfen: Zillertaler Krapfen are also very popular in Innsbruck and are primarily baked fresh for festivals. They are filled with potatoes, sometimes also with grey cheese or curd cheese. And then, of course, there are Schlutzkrapfen! Semi-round, filled pasta that is cooked in hot water. They are often filled with a mixture of spinach and curd cheese. Along with a small side salad, there is usually plenty of melted butter to go with it.

Tyroleans are also masters at combining and so you will often find a Bis or a Tris on the menu. The exact name of the dish is written underneath, if not: better ask. The combination of two or three dumplings and sometimes Schlutzkrapfen is often ordered, so you can taste your way through the menu inconspicuously..

Have fun trying them out!

foodsharing – not a case for the garbage can

A new year is dawning and we are in good spirits that everything will be better now.

A lot is happening in Innsbruck: restaurants, pubs and bars are opening and closing. Of course, there…